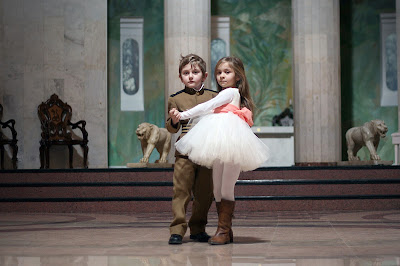 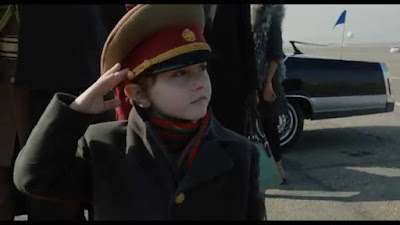 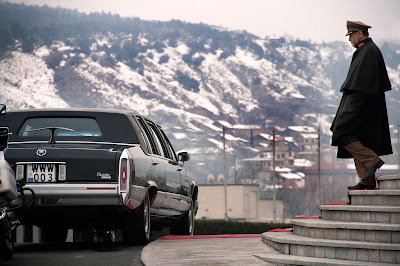 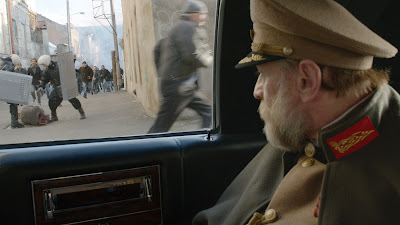 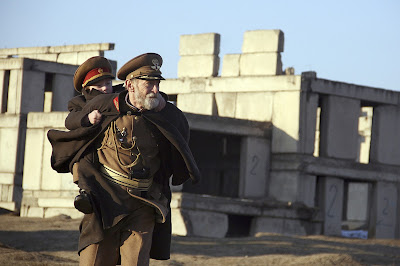 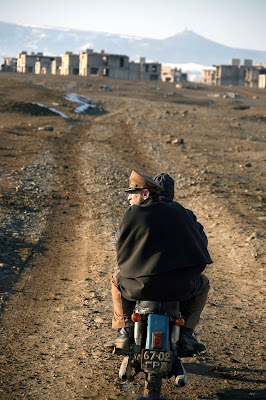 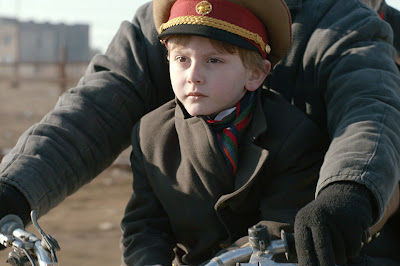 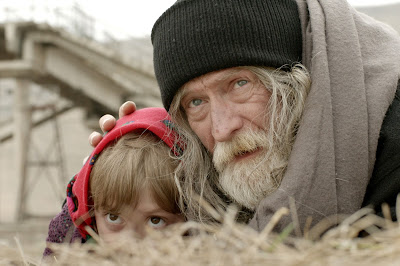 A film that was inexplicably named the Gold Hugo 1st prize winner of the 2014 Chicago International Film Festival, "The President" wins top prize at Chicago film festival ..., despite being one of the weakest efforts over the director’s career, writing a satiric caricature of a political dictator, becoming overly obvious, bordering upon hysterical near the end, lacking the subtlety and poetry of his earlier films.  Another Iranian filmmaker in exile, now living in London, having once spent five years in jail as a youth under the Shah, subsequently driven out of the country by the Islamic Republic, Makhmalbaf, along with Kiarostami, are major figures in Iranian cinema, though both left Iran in 2005 shortly after the election of President Mahmoud Ahmadinejad, whose regime soon began arresting artists, intellectuals, political dissidents, and anyone expressing outspoken views in order to preserve an authoritarian rule.  Unfortunately, the history of Iran is fraught with dictatorship, a subject this director knows all too intimately, having survived years of torture that permanently damaged one of his legs, while the ensuing revolutionary government was just as despotic.  Ostensibly based upon the uprisings of Arab Spring, where the idea of throwing out old dictatorial regimes based upon populist uprisings had an element of hope, with stirrings of democracy in the air, but the nationalist fervor often led to even more harsh repressions, with orthodox religions filling the void of political leadership, where ultimately one tyranny was replaced by another.  Written by the director and his wife, Marziyeh Meshkiny, the film unravels like an extended bedtime story for children, though by the end there is explicit adult material, as much of it is seen through the innocent eyes of an inquiring young 5-year old (Dachi Orvelashvili), whose grandfather (Mikheil Gomiashvili), always referred to as “Your Majesty,” happens to be the President, who is a Gaddafi-like dictator for life.  These two interestingly wear the exact same military uniform, suggesting they are mirror images of one another.  Used to having everything that he wants, the child is just as spoiled as the President, both displaying ferocious temper tantrums when things don’t go their way, as the President can be seen annoyingly ordering death sentences for captured militants with the ease of swatting a fly, including a young 16-year old, despite an outcry from international groups.

Life inside the palatial residence is one of neverending comfort and luxury, where every whim is instantly catered to, where the royal family is completely shielded from the outside world.  Nonetheless, they are used to wielding complete power, as evidenced by a game the President has with his grandson sitting in his lap, making a phone call and all the lights of the city go out, making another call and the lights come back on.  But when the child wants to play, the lights don’t come back on, plunging the city into permanent darkness, a sure sign that something is not right.  Whisking his family to the airport in a Presidential limousine, they bypass rioters in the streets in order to be greeted by a military brass band playing at their behest.  At the last minute, his grandson decides to stay with the President, assuring his family they will both be safe, that the city would be rid of these rebels by nightfall.  Once the jet takes off and his wife and family fly off to safety, however, things play out in a decidedly different fashion, as the streets are lined with protesters, where the limousine gets locked inside a wall of human bodies pounding their fists against the windows, as they have stormed the Presidential palace, and what’s left of the city has been reduced to riots and utter mayhem.  Amidst this firestorm of revolt, they flee.  As angry mobs stone their car and kill the driver, the President is forced to steal a motorcycle at gunpoint, eventually escaping into a row of dilapidated housing projects where he forces a petrified barber to shave his head and exchange clothes, as they assume a new identity after hearing the description on the radio of a fleeing President accompanied by a young boy, where a price has been put on his head, with calls for his immediate death.  From the boy’s point of view, this is all a bit unnerving, so the President turns it into a game, much like Roberto Benigni turning the Holocaust death camps into a game for a young child in LIFE IS BEAUTIFUL (1997).  As they blend into a sea of plagued humanity making their way for the border, they hear the stories of those who have been impoverished, tortured, and brutalized by the Presidential regime, where they are forced to witness firsthand the human damage suffered under his rule, where the anger and hatred directed towards the President is nothing less than ferocious, where he’s forced to witness each of these horrifying claims as silently as a ghost, shedding his skin in the process, where he, like everyone else in the country, has to reinvent themselves with a new sense of identity.

While this takes place in a nameless country, it’s actually shot in Georgia, which has its own history of strife and civil war since breaking away from the Soviet Union, where starting anew is never easy.  While there are a combination of things in play here, this is decidedly new territory for Makhmalbaf, as we don’t normally associate him with battle scenes, gun shots, bloodshed, and aerial helicopter shots that are more common in action thrillers, yet at the same time the President undergoes an internal psychological transformation akin to Shakespeare’s King Lear, as all around he sees the enveloping madness that can be attributed to his actions that set it all in motion.  Still the persistent questioning from the young boy, perplexed at how they have suddenly assumed the identity of the President’s enemies, subject to venomous talk about his grandfather as a criminal and a murderer who should be shot on sight, making it all seem patently absurd in his eyes, as there’s no other way to understand what he hears and sees.  At every turn the President is nearly exposed by the persistent questioning of this young child, asking what is a political prisoner, what is torture, and why would anyone want to kill us, with occasional lapses of calling him “Your Majesty.”  Even worse, we move from one extreme to the other, from innocence to depravity, as they are traveling with prisoners who have been brutally tortured for years, where now they can barely walk, yet they tell stories of friends that were burned alive, or another that was hanged in front of his own mother.  The tone veers into wretched pathos, eliciting a kind of emotional manipulation that has simply not been in this director’s vocabulary, but it’s extremely prevalent here, unfortunately growing more and more pathetic.  It’s the biggest drawback of the film, as it undermines the entire credibility of the film, growing ridiculously hysterical by the end.  The beauty of this director’s art has been his meticulously crafted subtlety, where he’s never resorted to over-explaining or a Spielberg style of force-feeding the audience, but this one tugs at the heartstrings with sentimentality, where he even exhibits a delusory dance for democracy.  Yet it’s unmistakable here as Makhmalbaf adds at least half a dozen endings, each with a differing outcome, while attempting a philosophical inquiry into the absence of simple humanity under the cruel conditions of Middle Eastern political rule.  It resembles a theater piece more than a film, all subject to human speculation, each segment quizzically asking ourselves what we aspire to be just at the exact moment in time when lynch mob justice is delivered.  Put differently, once a lynch mob has formed, an association linked to the mentality of these political uprisings, there’s little chance their actions will have anything to do with justice.
Posted by Robert Kennedy at 12:00 AM