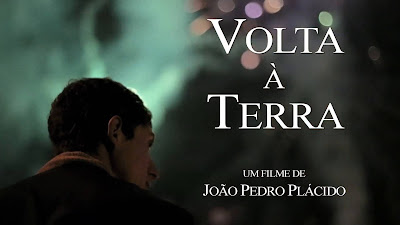 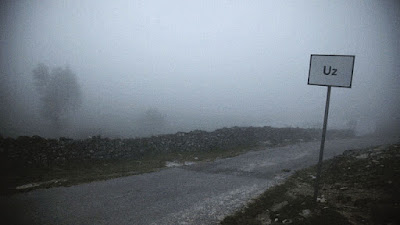 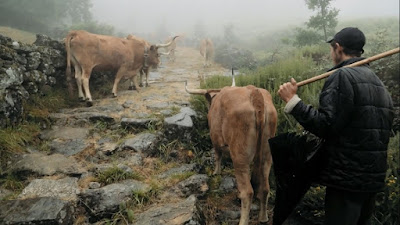 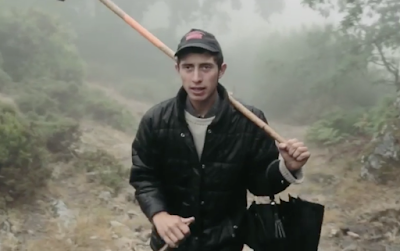 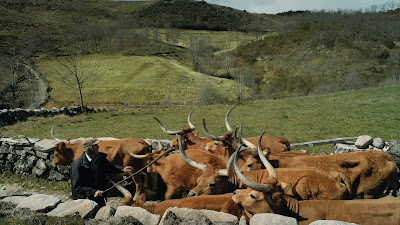 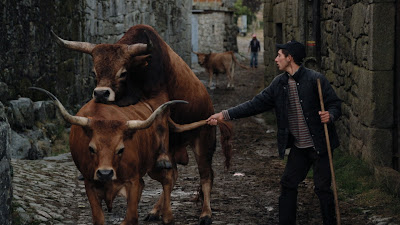 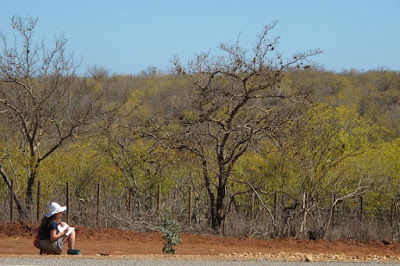 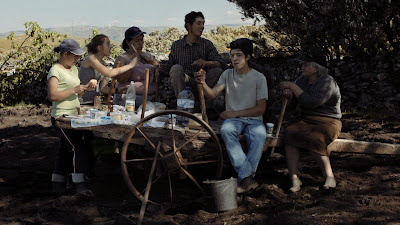 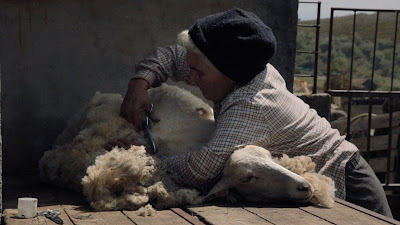 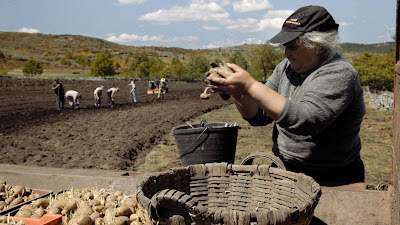 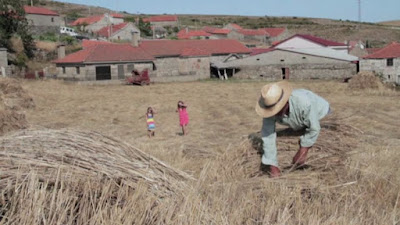 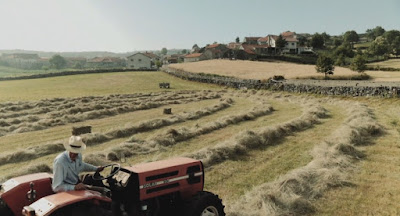 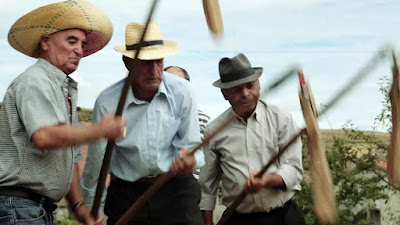 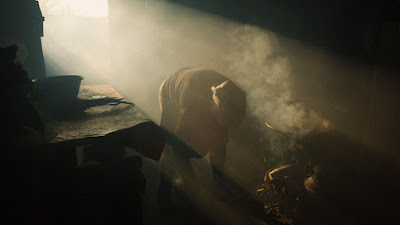 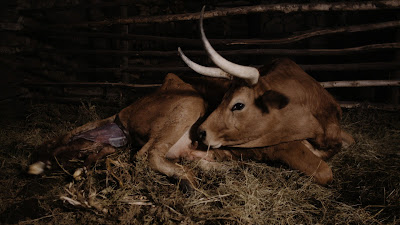 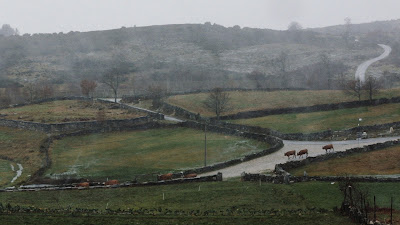 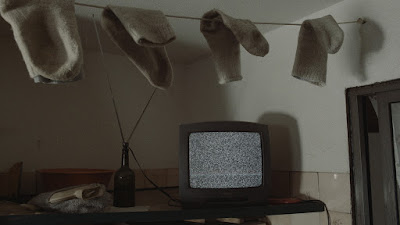 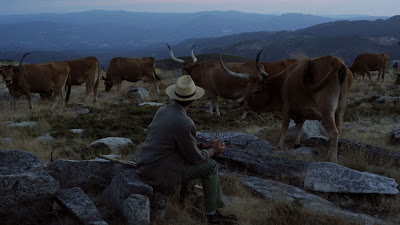 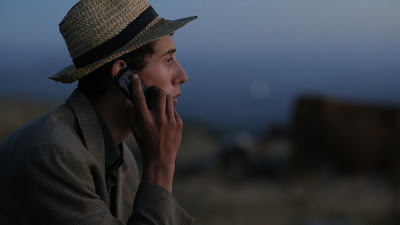 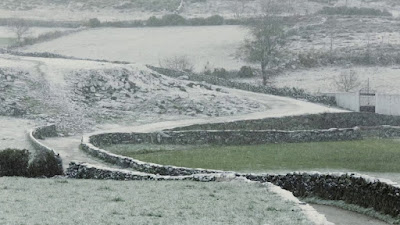 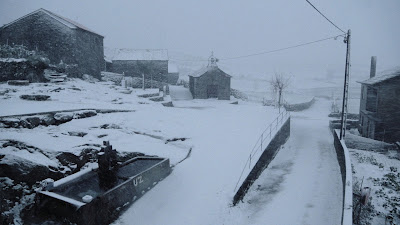 Co-written, shot, and directed by João Pedro Plácido, a Lisbon-born director raised by his maternal grandparents who began shooting music videos at the age of 19, attending film school in both Lisbon and Germany, as he is fluent in five languages.  Most of his previous work has been as a documentary cinematographer, where this is his first venture as a director.   Perhaps as a tribute to his grandparents, who are originally from the region explored in northern Portugal, the life depicted hasn’t changed much through the centuries, with farmers raising cattle and living off the land, where rising early and capturing the ritual of their daily routines comprises the majority of this somewhat slight work.  By exploring the four seasons in the remote village of Uz, in many respects it treads on similar territory as Michelangelo Frammartino’s wordless Le Quattro Volte (The Four Times) (2010), where the cycle of life feels unchanged since Biblical times.  In modern day Portugal, most have left these rural havens to seek work in the cities, leaving the arduous work to the large families that actually have the manpower to perform all the necessary chores, where a good deal of the film is witnessing family members out in the fields plowing or harvesting their crops, offering a communal feel to their lives that resembles Dovzhenko’s EARTH (1930), especially the jovial talk that they provide, continually teasing one another, making jokes at someone else’s expense, all in good fun, where the older family members continually ridicule the laziness of youth, as they have it so much easier than previous generations.  What’s remarkable are scenes where workers toiling at their backbreaking farm work break out into song at a moment’s notice, perhaps playing to the camera, but it happens with regularity, with the men often choosing saucy songs, like the kind sailors might sing at sea.  In fact, there’s a good deal of profanity expressed, usually when something doesn’t go as it should, but they use it as comic relief, where there’s a surprising amount of humor involved in just getting through each day.  One might attribute this to being a close-knit family, where they meet regularly over meals, where joking with one another is what comprises the dinner conversation.

Most of the film focuses upon Daniel (Daniel Xavier Pereira), at twenty-one, one of the youngest members to pull his own weight out in the fields, who dropped out of school in the 9th grade to help work on his family farm, where we see him at the crack of dawn, with fog still lingering in the air, as he lets the cattle out of their stables and leads them down a rocky pathway, up a few stairs, and out into the rolling hills where they can graze all day on fresh grass.  Calling each by name, swearing profusely when they ignore him, he is a modern day shepherd that spends his days tending to a prime herd of cattle while lost to his own dreams and ambition.  The film offers a mix of rural solidarity within a strong family unit that must work together to survive, but also moments of solitude, where the presence of the land is paramount.  Daniel jokes about an aging bull that finds it more difficult to procreate, claiming it needs some Viagra while being teased relentlessly about how he needs to offer a helping hand.  Part of what attracts the filmmaker’s interest is the eccentricities of the elders, who develop their own habits, where one interestingly walks to one of the town’s celebratory festivities with a scythe still in his hand.  One of the more amusing scenes features Daniel attempting to communicate with a young French boy, where they seem to do nicely by speaking only their own languages, where the young kid is not in the least persuaded to learn Portuguese.  While there are scenes of gathering wheat, tying them into stalks, there are also sheep that are individually sheared by hand, while a gigantic pig is butchered into various sized cuts of meat, where nothing seems to go to waste.  As they work, pulling a stalled tractor out of the mud, people from town can be seen standing around the road shooting pictures of them, where a centuries-old tradition collides with the modern era, as if farmers have become an endangered species.   It appears the village was founded about 700 or 800 years ago, but the population has dwindled recently, with a current population of under 100 residents, where one farmer can be heard lamenting, “Those that work the most, earn the least.”

The film is surprisingly more upbeat than one might think, filled with jovial moments, none more electrifying than the annual village festival, where Daniel encounters an attractive former classmate (Daniela Barrosa) now living in a neighboring town, where they hang out together, walking in a candle-lit church procession, each carrying their own candle, where Daniel can’t remember the words to the songs, as it’s been so long since he’s been to mass.  She reminds him that it’s like riding a bike, sarcastically telling him “You’re the man, Daniel” when he remains clueless, continuing into the church service where he noticeably sings off-key.  But he’s cool with it, even if she’s embarrassed, where there is music and dancing afterwards, with old people sitting on the sidelines gossiping, followed by an extremely loud fireworks display.  He, of course, hears about it from his family the next day, where he constantly takes a ribbing from his elders who are curious if he feels strongly enough to run off with her to live in her town.  Suffice it to say, Daniel is happy where he is, where he’s in line to inherit a sizeable piece of the farm, and he obviously enjoys the way of life that he’s grown accustomed to.  As he takes the cattle out into the fields the next day, he pulls out a cellphone and calls his sweetheart, but she has no real interest in becoming a farm girl, leaving him to wonder about what might have been.  Realizing potential wives are scarce, Daniel tries to save face by indicating he might have to seek a bride over the Internet, perhaps from China or Brazil.  But as the summer winds fade, the season’s change, where a female cow gives birth, where the stable is full of young calves, offering hope for the future as the winter snow settles in.  While ostensibly a documentary on the unchanging landscape in a constantly changing world, it’s also a coming-of-age story rooted in family traditions while also being influenced by the luxuries and temptations swirling all around from a more contemporary urban life.
Posted by Robert Kennedy at 12:03 AM