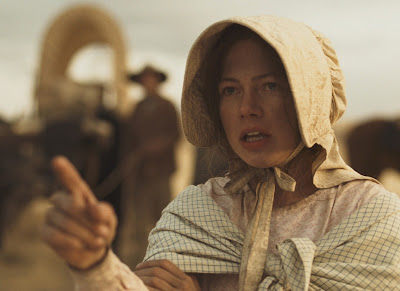 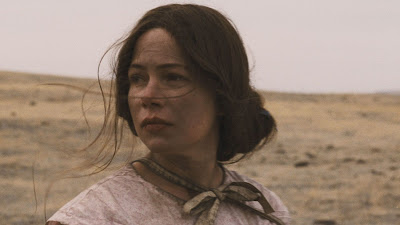 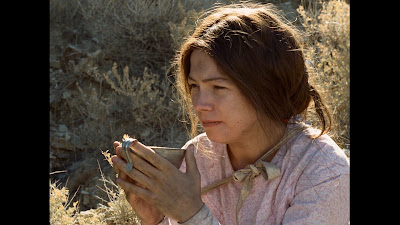 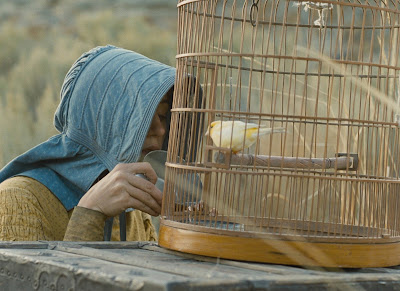 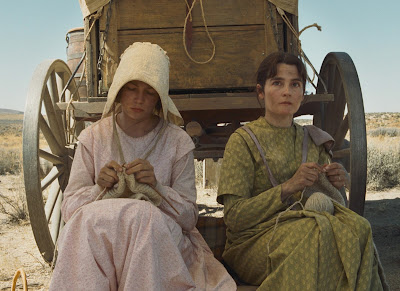 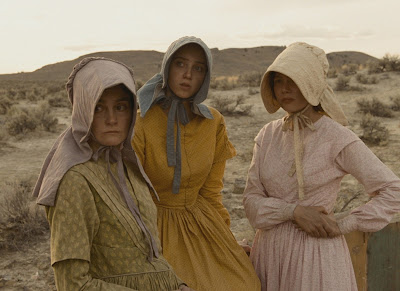 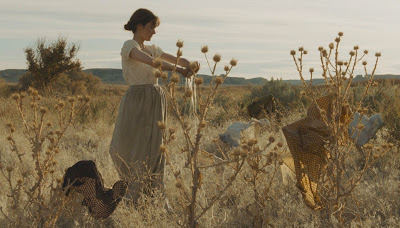 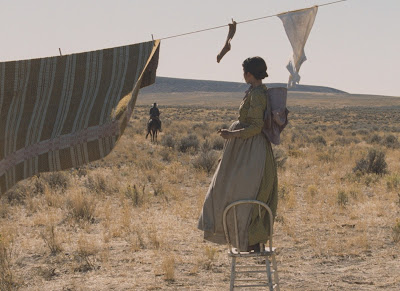 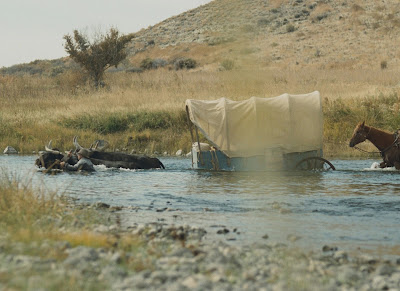 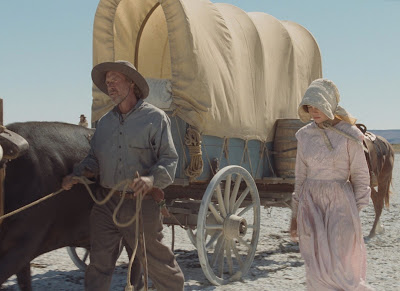 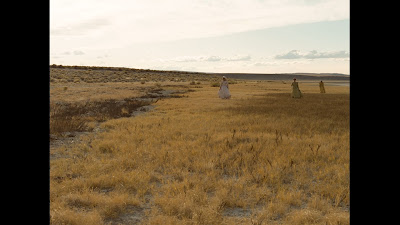 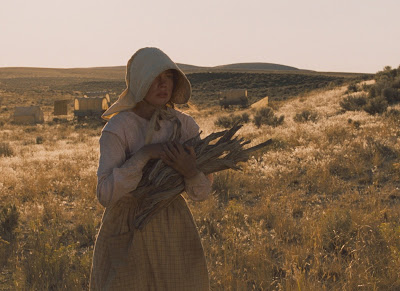 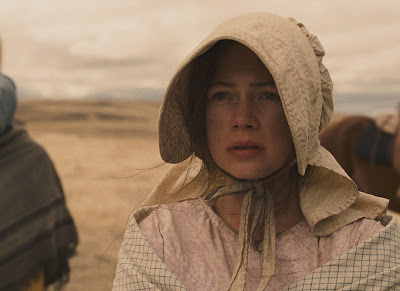 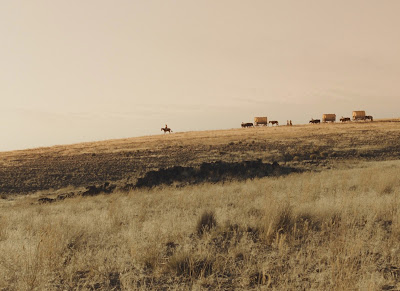 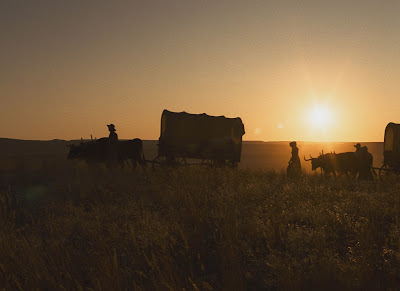 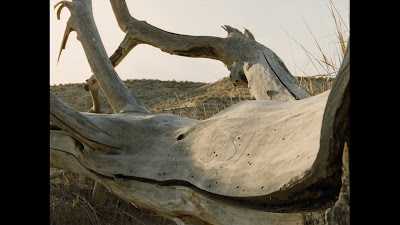 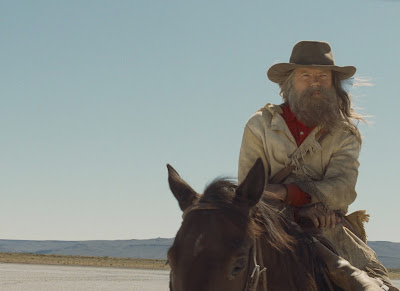 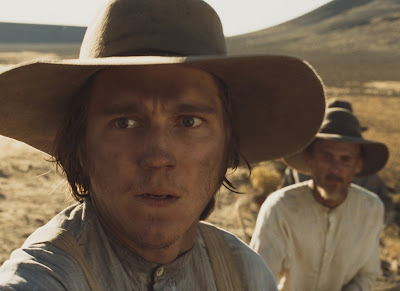 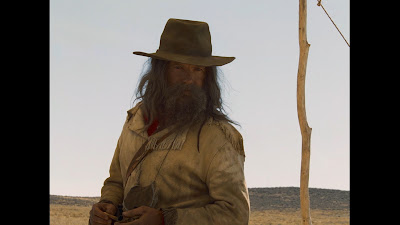 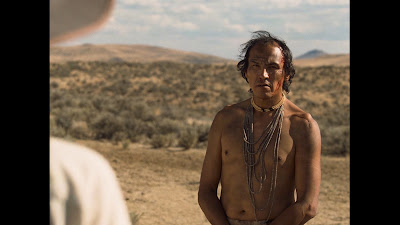 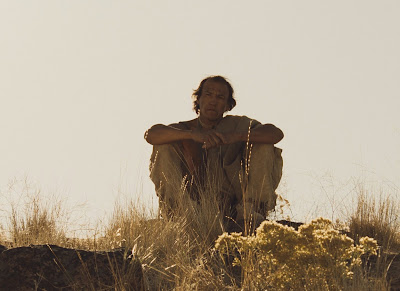 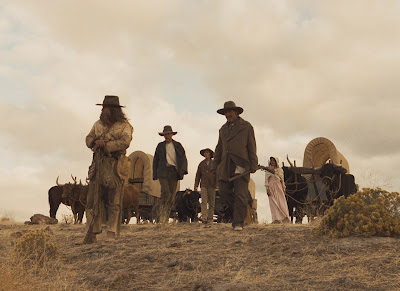 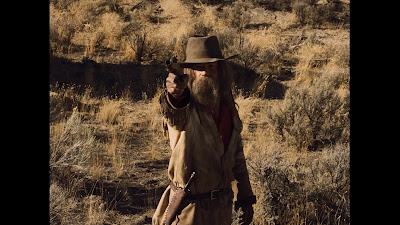 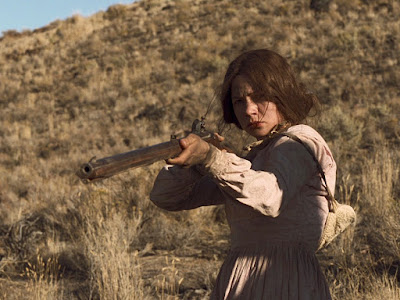 
A revisionist western that depicts the aimless wanderings of a small wagon train party of three young married couples bound for Oregon Territory in 1845, who apparently break off from a larger group to set out on their own led by a gruff, Buffalo Bill-style frontier guide, Stephen Meek (Bruce Greenwood), who prefers to constantly remind them of the perils that surround them instead of actually being of some use and leading them somewhere.  Written by Jon Raymond, but supposedly based on real events, what’s interesting is how little actually happens in this film, where the drama is in the details of portraying day to day struggles, where compounding pressures to make the right decisions and endless hardships beyond their expectations continually await them, where the story actually becomes their deteriorating state of mind as they run short of faith and water.  Something of an existentialist drama taking place in the expanse of the arid desert of the West, the film is not shot in ‘Scope, which would reflect the wide expanse of the ever distant horizons, but is instead shot in the box-shaped 1:33 aspect ratio which continually gives the audience the claustrophobic feeling of being boxed in while also punctuating the intimacy of human faces.  The mood of the film is suffocating, where the darkness of the night and the near inaudible dialogue make it impossible to figure out what’s going on initially, as all conversations to make sense of the situation are drown out by their dire predicament, which suggests they are lost, having placed their trust in a guide who’s full of tall tales but no practical answers of where to find water.


Adding more psychological anxiety to the situation is the discovery of a lone Cayuse Indian (Rod Rondeaux) roaming in the vicinity that they catch and keep tied-up as a prisoner, initially having to decide whether to kill him or not, as urged by Meek, believing all Indians are savages, or hope he can lead them to water.  Solomon and Emily Tetherow, Will Patton and a heavily bonneted Michelle Williams, are the voice of reason, preferring to believe that since the Indian is from the territory, he knows his way around and can find water, even though he speaks no English and the words he utters are completely incomprehensible.*  Still, they place their faith in him as the wagon trains follow his slow trek into the expanse of the distant horizon.  Of interest, only Meek rides a horse, as all the rest walk, hoping to save the strength of the animals.  Also, whenever it’s time to make a decision, the men gather off to the side while the excluded women sit and wait, accepting their husband’s wisdom.  While this may seem like a minor point, this exclusion creates more psychic tension when things go wrong, as people typically need someone to blame, especially when they don’t have a choice in the matter.  When nerves are on edge, people are liable to think the worst, making their situation even more catastrophic, which has a near comical effect when one woman has fanatical delusions that the Indian is not leading them to water, but to his tribe and their ultimate doom.  With mounting dread, around every hillside they expect an awaiting ambush.  This gives the film a kind of sci-fi feel, as the Indian is not seen as civilized or human and may as well be from outer space, treated as if he is an outlaw alien.


Emily grows to bitterly distrust Meek as a man who does not live up to his word, as he hasn’t led them anywhere, seemingly traveling in circles, viewing him as a worthless creature that is all “vanity,” but has her doubts about a kept prisoner who’s liable to turn on them at any second.  The film has elements of two superb Australian outback films, Nicolas Roeg’s WALKABOUT (1971), which presents the psychological ramifications of both cultures when a young white brother and teen sister lost in the outback happen upon a young, barely clothed teen Aborigine, placing their faith in him as they wander idyllically at times, where each never really comprehends the other.  The other is Rolf de Heer’s THE TRACKER (2002), where a captured and enslaved Aboriginal tracker is placed on foot and in chains to lead three armed white mounted police in pursuit if an alleged black murder suspect who has retreated into the bush.  Contrasting visions of colorful Aboriginal art with the vulgar racist slurs of the white police patrol is a dramatic tool in detailing the psychological motives of each party.  But in this film, the Indian rambles in unsubtitled words, where his character and inner soul remain a mystery, while Meek has proven himself to be a conniving braggart who never lived up to his part of the bargain.  There is a flash point where a meeting of the minds surges out of control, where in a state of panic and desperation, anything can happen, as people are at their wits end and see no way out, trapped by their own delusions and misplaced trust.  The spare but eerie music by Jeff Grace is exceptional, giving this a Zen, acid-laced tinge with a mythical feminist twist for the times.  Not your ordinary western, this feels more like an existentialist play where the characters are stuck in a purgatory of endless doubt and ever mounting futility.


*Note:  according to Cayuse language - Wikipedia, the free encyclopedia, the language of the Cayuse Indians is extinct, so instead they used the untranslated words of the neighboring tribe Nez Perce Language or Nez Perce language - Wikipedia, the free encyclopedia, where there are some 600 remaining Indians in Idaho who speak the Native language, but fewer than 100 are fluent.  Throughout history, actions have consequences, where the film’s portrayal of Native Indians in 1845 as uncivilized and savage, someone less than human, has resulted in a language that through the passage of time is extinct.  Not only did the U.S. military track down Native tribes and force them to live on barren reservations, but they stripped them of their existing culture.
Posted by Robert Kennedy at 12:35 AM