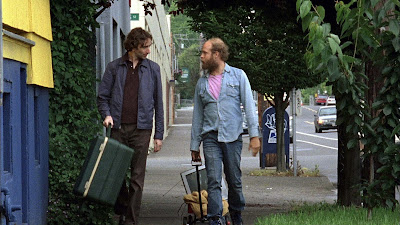 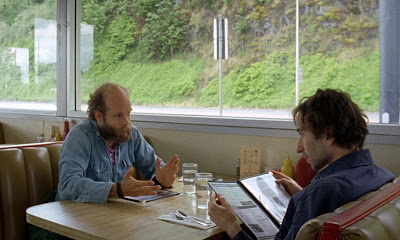 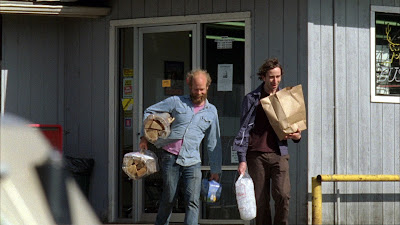 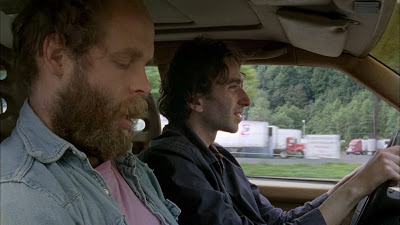 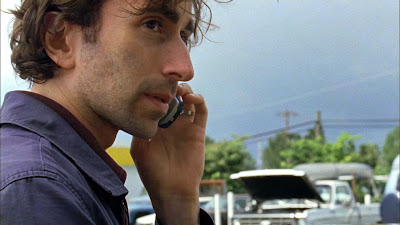 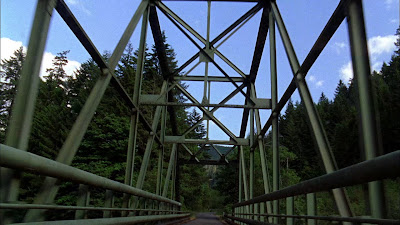 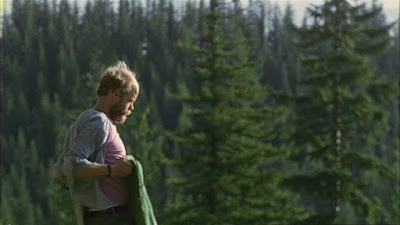 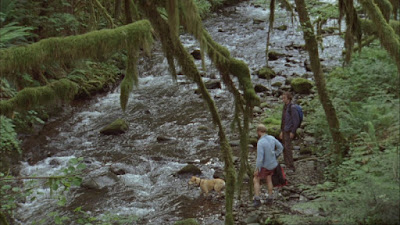 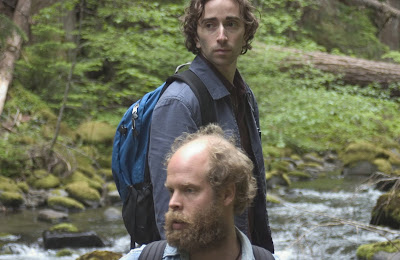 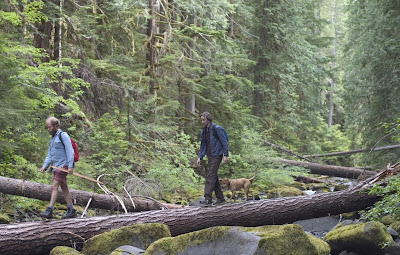 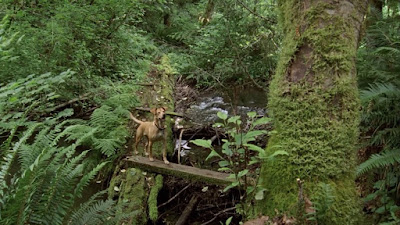 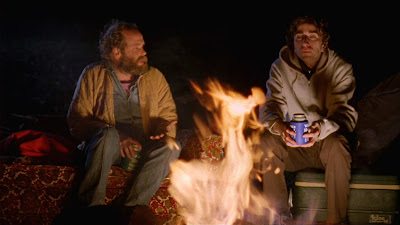 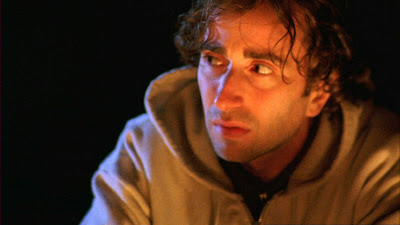 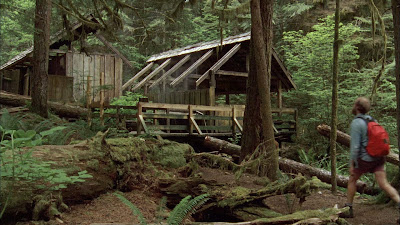 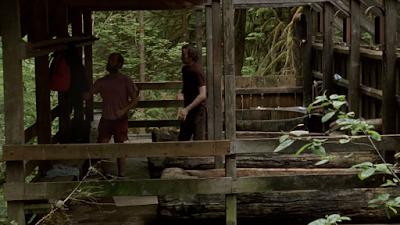 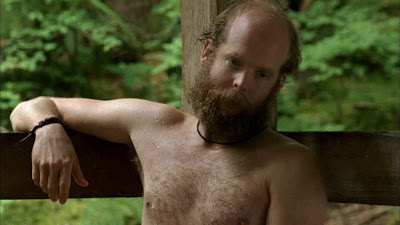 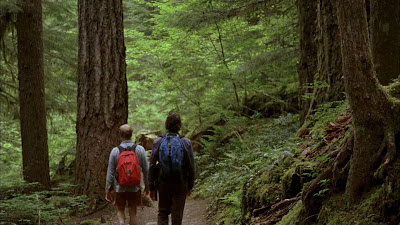 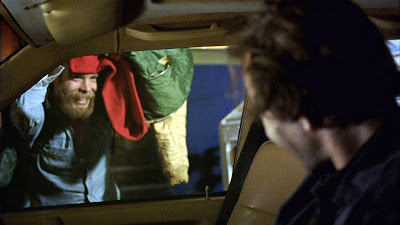 Sorrow is nothing but worn out joy

Otherwise known as Old Geezers on Parade to the general twentysomething viewing public, made for just $40,000 with music by Yo La Tengo, this is just a terrific indie film, amazingly free of narrative content, much of which must be supplied by the viewer, where the more you know about these guy’s backgrounds yourself, the more you’ll get something out of the film, as you’ll understand all the references, visual and otherwise, which include treks through the lush forests of the Cascade mountains outside Portland, Oregon, as two guys (Will Oldham and Daniel London) go in search of the Bagby Hot Springs (described as GERRY of the Redwoods!!!).  But it’s an unusual subject matter, the aftermath of the 60’s counterculture, seen in light of today’s politics, which must include dealing with the disillusionment of lost ideals, and the political ruination of everything you once hoped might come to pass in your lifetime.  On the other hand, without the background knowledge “prior to” entering the theater, this may be perceived as a stoner flick, as people behind us were lighting up a bong in the small theater of the Music Box.  There was very little dialogue spoken in the entire film, hardly anything “between” these two guys, just rambling fragments of thoughts which never really lead anywhere, which suggests an interesting disconnection between who we were and who we are.

This could be called a macrobiotic style of filmmaking, like a trip to one of those Big Sur Esalen Institute retreats as it beautifully blends into the character of the gentle Oregon slopes and is an apt reflection of West coast mentality, which has never veered far from the 60’s counterculture mentality, but has also never found a comfort zone in society at large.  This is a deceptively subtle film whose loudest voice is its silences, harking back to a time when we really used to “listen” to one another with an almost insatiable appetite, and had plenty to offer in terms of relevant cultural insight and point of view, which has been curbed through the passing of time, subsided into the distant, faraway regions of the current political landscape and been deemed irrelevant in the sound bite, talk radio and/or blog opinion instant script that has become the vehicle for today’s news.

There’s a beautiful minimalist understatement of this journey into the woods, which allows us to see and feel the distinct flavor and landscape of the Oregon Cascade mountains, which are mere hours away from the Portland city dwellers.  In California, Oregon, and Washington, there are major urban areas, yet within an hour or so in any direction, one can immerse themselves into mammoth wilderness regions which are filled with naturalistic wonders to explore.  In the 60’s, groups would routinely leave the cities either hitchhiking or in VW buses and take expeditions into these outback regions to avoid the reach of the law, to get high, strip naked, and just let themselves go in an uninhibited expression of being free without having to worry about being subjected to conformist “straight” thinking.  Here one dropped out of conventional society, leaving behind the prejudices, preconceived notions, judgments, and other inherently self-centered, short-sided views and dropped into a completely different state of mind, where one communed with nature and developed a relationship with planet earth.  Questioning and even rejecting the validity of what people routinely heard on television, in the news, from leading political figures, and even what we were being taught in schools or at home, was pretty common in those days, and what was advocated instead was not some grandiose, violent scheme to overthrow the government, though some went that route, but instead each was responsible for discovering their own personal journey, for finding their own way.  OLD JOY reflects on this philosophy, this search for internal wisdom through peaceful means, by dropping the ordinary hang ups, the stress-induced competitive urge to succeed at all costs, or to be judged by age old traditional religious values that reflect worth only through work.

Unfortunately, the political process since the early 70’s has tainted the playing field through a series of unending dirty tricks, negative ads, and out and out lies, which leaves a populace so cynical and suspicious of anyone’s political motives that Jesus Christ himself, should he return, would probably be labeled a “liberal,” or some other irrelevant label, which only serves to diminish his real value in the eyes of others.  This is standard operating procedure for the past 30 years, leaving many anxious and confused as to where they stand, as what they believe in has been pulverized by the press and political pundits to such a degree, factionalized into single interest groups, demoralized into believing there’s really no hope anymore, pitting one against the other, isolating them into mere afterthought, until eventually we are led to conclude that only the interests of the really rich are represented in Congress anymore.

All of this build up of resentment and disillusionment is a backdrop for the film, and never mentioned outright, only suggested through hints and small gestures of the beautifully detailed characterizations, but provides the emotional core that generates the urge for these two long lost buddies, each apparently heading in different directions in their lives, to get back together again for a two-day venture into the woods as they search for the remote seclusion of the Bagby Hot Springs.  One is married and about to become a father while the other remains something of a wanderlust, wary of ever being tied down.  Yet even as they meet, they rarely look one another in the eye, or hold any discernable conversation at length, but remain hidden behind their own invisible veneers, continually protecting themselves not from one another, but from having to admit their own disillusionment with themselves, failing to live up to their own set of ideals, and from having to acknowledge the vacuous emptiness that continuously gnaws at them just under the surface each and every passing day.

The spirit of the film is amazingly tender and oblique, beautifully shot by Peter Sillen, drawing an odd similarity to the missed connections in Wong Kar-wai’s HAPPY TOGETHER (1997), even to the way they get lost en route and discover their road map is all but useless, but this is a smaller, simpler vision suggesting we’ve never before reached this particular fork in the road, this uncertainty about the future.  There is the possibility that the film is entirely too spacious, that many younger viewers are unfamiliar with the kind of communal hope and idealism that once existed, in which case the slim narrative may feel like a stoner comedy with an air of eloquent 60’s nostalgia, none of which was actually shown in the film, yet there are peculiar, unmistakable references, especially to West coast 60’s mentality, which anyone who’s ever been there understands.  But disillusionment is key, the internalized heartbreak from having to accept so much less from our nation and from ourselves than what we had once hoped is a central message of this film, how far we are from the kind of world we once dreamed of, as we continue to be divided and disconnected from the planet and from one another in ways that only leave us more emotionally paralyzed and incapacitated.
Posted by Robert Kennedy at 12:04 AM