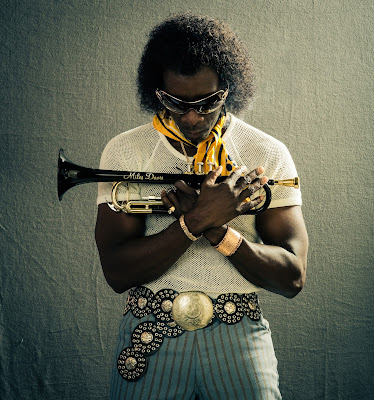 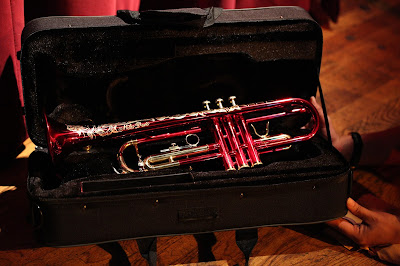 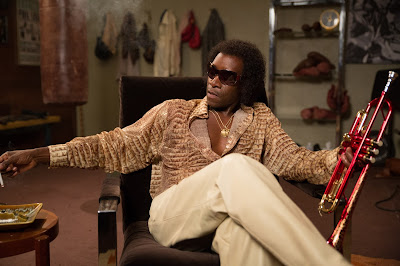 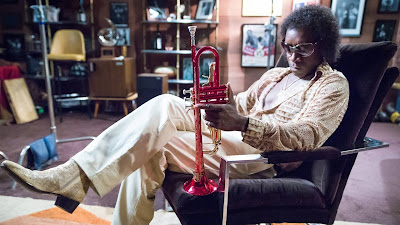 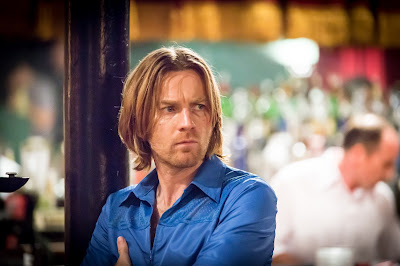 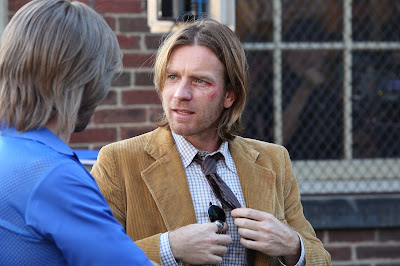 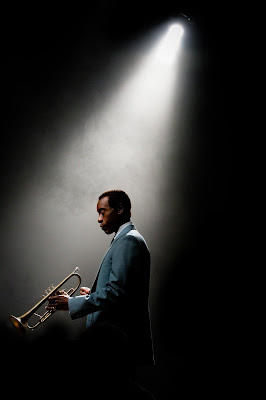 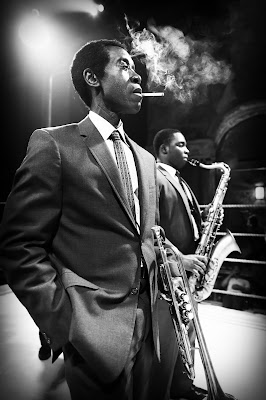 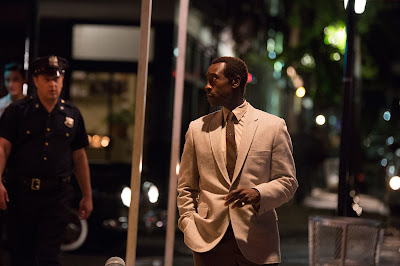 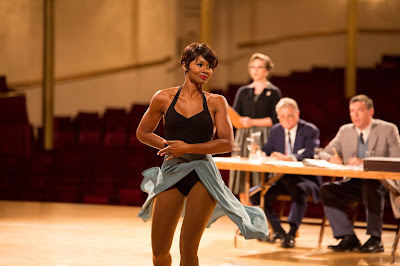 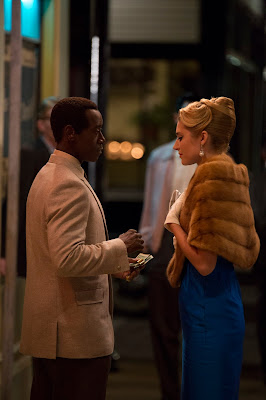 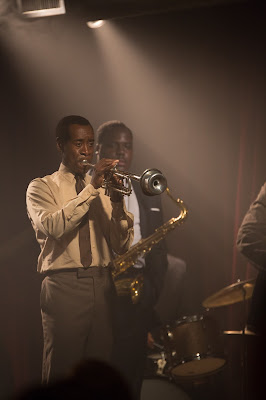 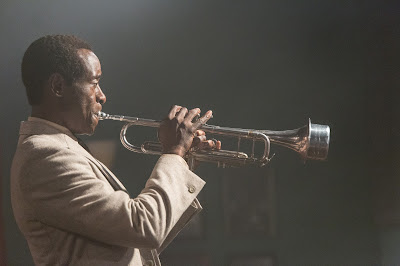 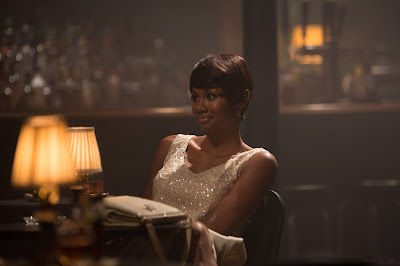 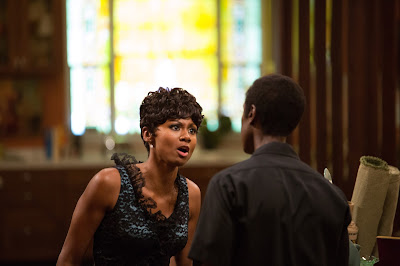 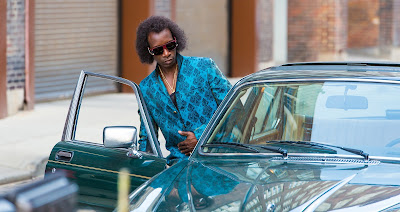 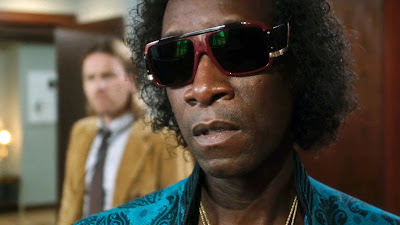 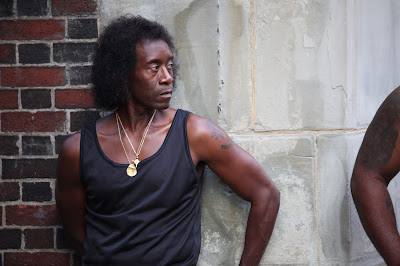 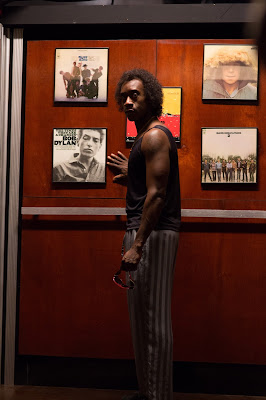 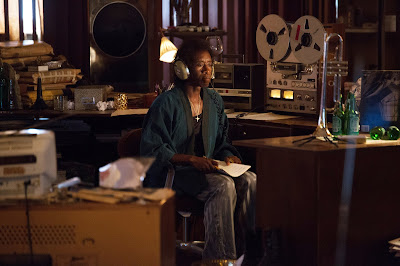 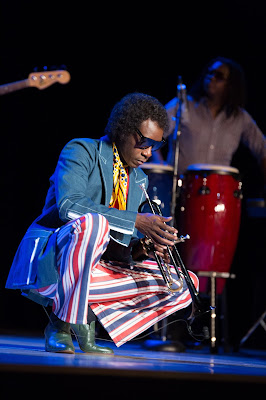 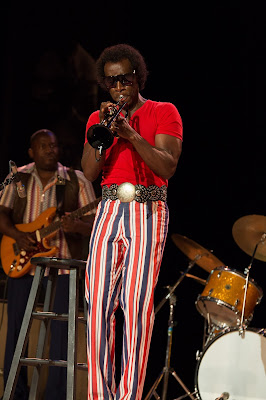 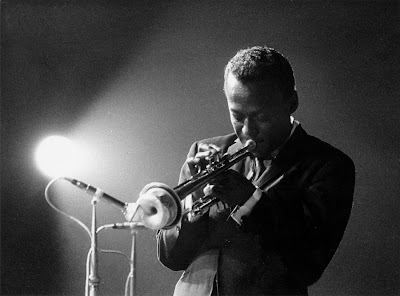 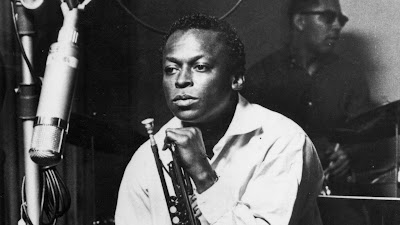 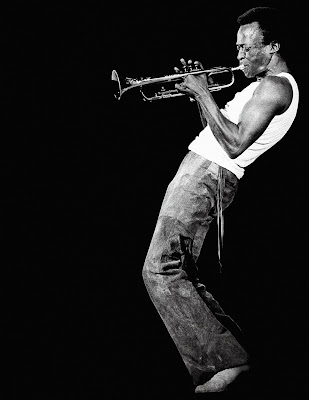 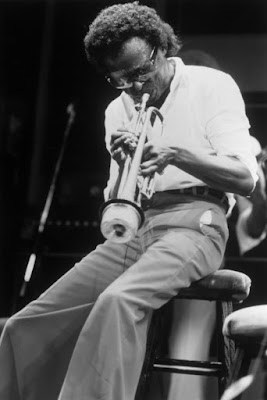 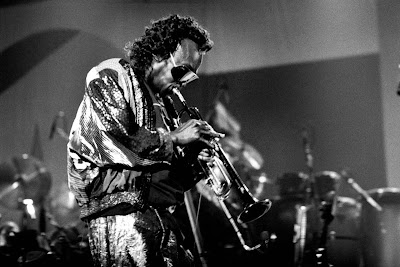 
While it must be nearly impossible to write an original portrait of jazz legend Miles Davis, a guy that defied labels or standard definitions, who continually evolved musically throughout his entire career, much like Bob Dylan in the folk rock scene, two iconic figures that literally paved their own ways in the music industry, alienating fans in the process by moving from acoustic to electronic music, both ironically recording for the same music company, Columbia Records, where their music literally defined the changing 50’s and 60’s American landscape.  That said, no one would have expected anything along the lines of this picture, requiring 30 producers, written by a conglomerate of writers that includes the director and lead actor, making this a definitive Don Cheadle project, yet what he’s produced is so ridiculously cartoonish and over-the-top that it amounts to a comedy, as in the Keystone Cops comedy of errors.  Not sure that’s what they had in mind, but there’s nothing about this that remotely resembles the life of Miles Davis, yet, to its credit, it does contain authentic Miles Davis music throughout, like the familiar refrains of “So What” Miles Davis - So What - YouTube (9:06), but no archival footage, which might have been nice.  One of the things that worked so well in Asif Kapadia’s Amy (2015), winning the Academy Award for best documentary feature, was the extraordinary range of personal expression obtained through archival footage, where by the end of the film the audience felt they knew her as a person.  That’s simply not the case here, as Davis’s personal life has always been viewed as off limits, elusive and of secondary importance to a man of cool reserve and detachment who held everything back, at times even turning his back to the audience, revealing mysterious, enigmatic qualities of his personality, where his music revealed more than he ever did.  Instead it was all about the changing styles of his music, continually redefining himself through the years, having been at the forefront of the bebop, cool jazz, symphonic and orchestral jazz, harmonic jazz, small combos, recorded live performances, free association and eclectic jazz fusion movements.  By all accounts, he was literally a rock star at the end of his life, complete with a drug history, largely cocaine, where his reputation was that of an uncompromising artist driven to be constantly innovative.


What’s surprising about the film is its similarity to James Ponsoldt’s The End of the Tour (2015), another unauthorized biographical account of the life of author David Foster Wallace, as viewed from a Rolling Stone reporter who followed him for a week on a book tour.  Here Ewan McGregor plays the obligatory Rolling Stone reporter Dave Braden, who ends up at the front door of Miles Davis’s luxurious Upper West Side apartment, something of a con artist driven to write his comeback story, who strangely latches onto him throughout the entire ordeal.  What transpires is a mix of what actually happened, much of it seen in flashback, and a fictionalized version of what might have happened, as these were the kinds of thoughts that kept running through the head of Miles Davis during one of the more troubled periods of his life between 1976 and 1980 when Davis turned fifty and his drug addiction kept him from performing or even playing his horn.  Why we need a cringingly unsympathetic reporter accompanying Miles throughout is anyone’s guess, feeling like a major misstep, as there’s no interest whatsoever in his shady character, as all eyes remain focused on Miles (Don Cheadle).  In fact, the world is probably starved for a more definitive film on his life and his music, as he led such a reclusive and mysterious life, but this isn’t it.  This is more of a comic action buddy picture where Braden accompanies Miles on a series of spontaneous misadventures revolving around drugs, money, guns, a stolen tape, and fast cars, with Davis as the temperamental, drug-addled, out of control gangster who pulls his gun out and starts shooting whenever things don’t go his way.  While not mentioned in the film, Davis had hip-replacement surgery in 1975 and spent nearly a year recovering, using cocaine, heroin, and drinking heavily to alleviate the pain, an event that probably led to his public disappearance and might explain why he was walking with a noticeable limp during this time.  Despite the immediate contempt and disdain expressed by Miles for this interloper reporter (and just about everyone else), they remain joined at the hip throughout, like a bloodsucking leech one can never get rid of.


Nothing compares to the prolific 30-year association of Miles Davis and Columbia Records from 1955 to 1985, where in jazz music there is simply no precedent, as the legendary artist released 48 studio albums, 36 live albums, 35 compilation albums, 17 box sets, 3 soundtrack albums, 57 singles, and 3 Remix albums.  According to his biographer Ian Carr, (Miles Davis: The Definitive Biography, 1998), Miles was accorded a special status with Columbia Records shared only with classical pianist Vladimir Horowitz, where even through what he calls Miles’s “silent years,” both were regularly paid through a fund the recording company created just for them.  In one of the earliest scenes in the film, Miles reveals his anger at not receiving a check for $20,000, which is the impetus for everything that follows, as he orders Braden to hop in the front seat and drive his deluxe Jaguar to Columbia, where he accosts one of the producers (Michael Stuhlbarg) with a gun, demanding immediate payment, taking whatever cash the man had in his pocket.  After this little episode, he’s ready to part ways with Braden, but he pleads his case by promising to score some primo coke, which leads them into yet another escapade, the first of a neverending series of excursions through a dark labyrinthian alley.  Unlike the path most taken, revealing a great artist at the height of his powers, Cheadle stakes out the territory for his worst years, where sex and drugs occupied the place in his life where music used to be.  Always having a reputation for being cold, withdrawn, and distant, this film also accentuates his quick temper, though it does provide some underlying background, using Cincinnati as a substitute for New York City.  While playing a club in the Village, he becomes fascinated by the smoldering beauty of celebrated dancer Frances Taylor (Emayatzy Corinealdi), utilized more as a femme fatale, where his playing and her sensual dancing lead to exquisite improvisational routines that reveal a playful intimate side of their relationship that leads to marriage.  But Davis is over possessive, perhaps fueled by a drug and alcohol-induced jealous paranoia, demanding that she stop working and accompany him on his worldwide tours.  In one racially tinged scene, he’s arrested by a white New York cop who thinks he’s loitering in front of Birdland in upscale Manhattan, bashing him over the head with his nightstick when he refuses to leave and promptly has him arrested.  While this is a recreation of a real event, it was also a prelude to escalating domestic violence at home, where Taylor fears for her life and eventually leaves him.


Much of what transpires afterwards has the ache of regret, as if the past is viewed through a drug-induced stupor, where events feel exaggerated and lack coherency, yet they resonate with Miles’s abrasive personality, “If you gonna tell a story, come at it with some attitude, man,” with Cheadle’s performance feeding off that raspy voice, the result of a throat operation in the mid 50’s, where he’s the kind of guy that reacts to everything around him, where early on he objects to hearing his name on the radio connected to jazz, claiming the word is all but extinct.  In something of a funk, he calls the radio program and tells them, “Don’t call it jazz, man — that’s some made-up word.  It’s social music,” actually making a request to hear “Solea” Miles Davis - Sketches of Spain - Solea - YouTube (12:21), a sad, funereal lament that offers a wide range of timbres, tonalities, and harmonic structures that literally transcend the jazz medium.  While there is a somewhat convoluted story about a missing tape that was stolen from his apartment, where Miles insists upon getting it back, by any means necessary, as it contains secret recordings that he was keeping from the studios, the standard gun-toting movie format utilized may equate to some masculine, superhero idea floating around in his head, like Superfly, but this inexcusably cheapens the man and the film, as it doesn’t feel nearly complex enough, though it does allow the viewer to spend a day in the life of an imaginary version of his persona, where if that’s any indication of what each day is like, the man was not cheated out of adventures in life.  Jumping around to different periods in the past, his basement recording studio is like a time machine, where actors play the familiar roles of Herbie Hancock, Ron Carter, Tony Williams, and Wayne Shorter, seen informally rehearsing “Nefertiti” Nefertiti by Miles Davis - YouTube (7:55) while Miles steps upstairs in a violent fight with his wife, where the obvious link between the turbulence in his life and his music is unmistakable.  Bits and pieces of the heavily percussive and electronic score of “Bitches Brew” Miles Davis - Bitches Brew - YouTube (7:30), also a brief snippet in performance, Miles Davis - Bitches Brew Clip 1 YouTube (2:04), can be heard as his life spins out of control during chase scenes and car shoot outs.  What’s altogether missing in this film is any insight into personal relationships with band members or friends, as they are never seen conversing or just hanging out, instead it’s a portrait of a man living all alone in a dark, cavernous apartment haunted by memories, real and imaginary, where his life as a hermit has left him unable to play, where instead he’s been practicing on the organ.  There is an invigorating moment when he plays father figure to a young upstart (Keith Stanfield), someone he’s been dismissive of throughout, where arguably the best parts of the film are the final scenes literally exploding in a psychedelic color fantasia, an imaginary concert in the future “after” his comeback where he’s worked his way back into supreme form.
Posted by Robert Kennedy at 12:00 AM