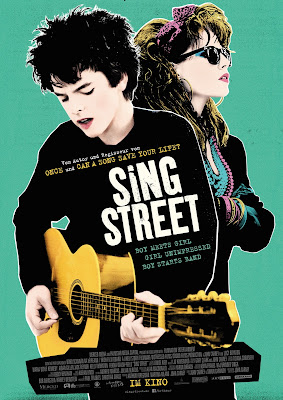 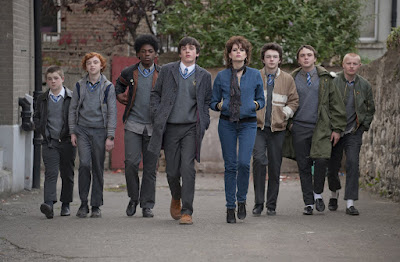 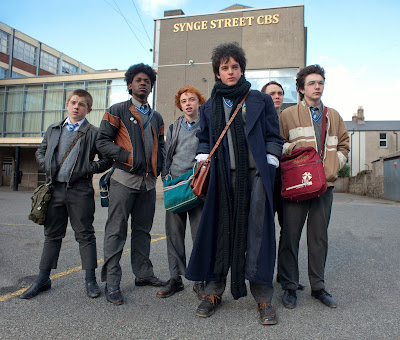 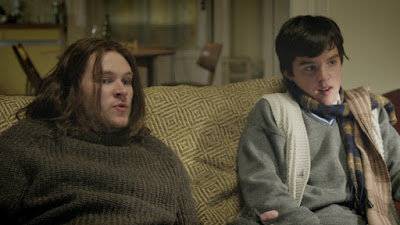 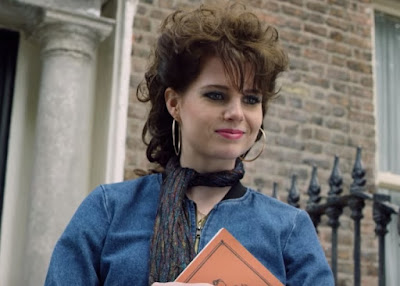 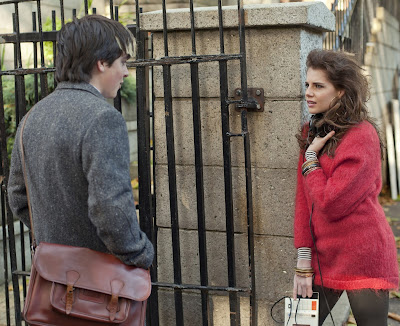 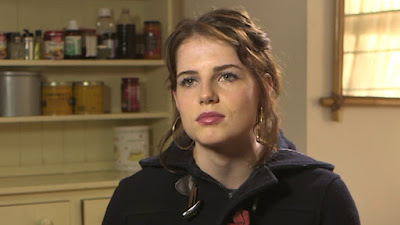 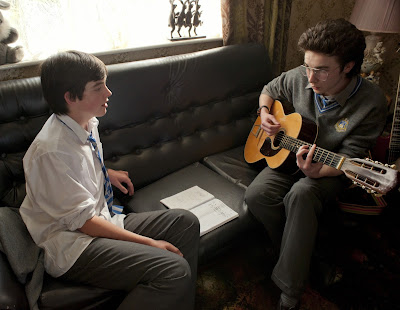 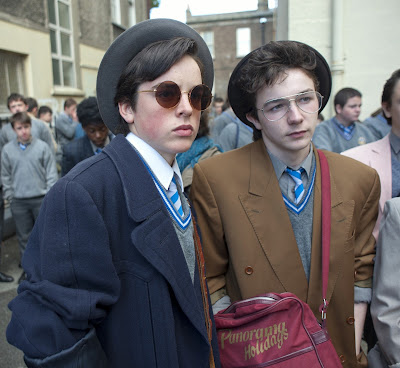 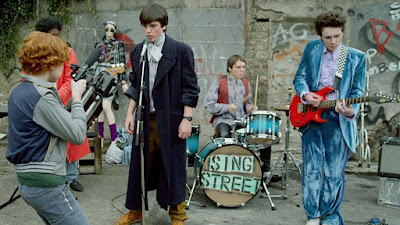 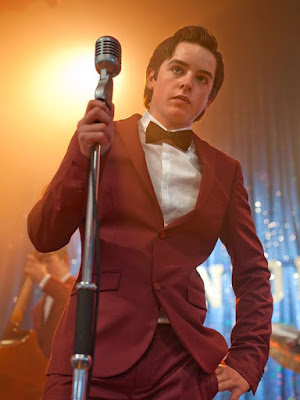 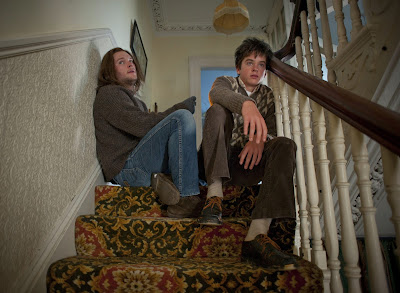 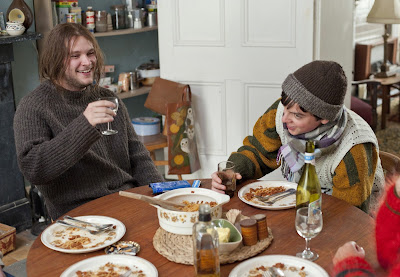 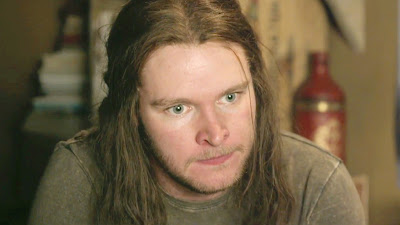 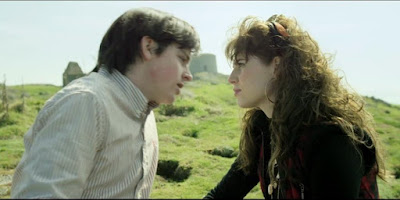 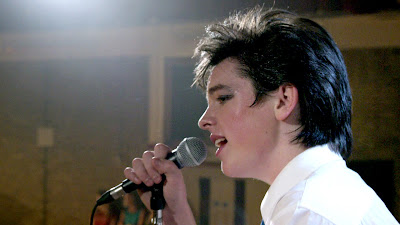 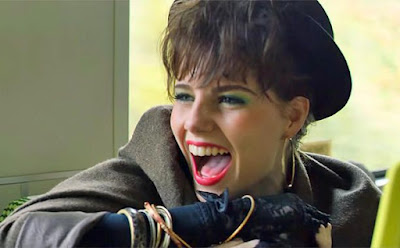 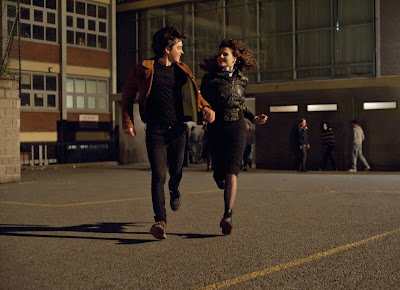 SING STREET                B
Ireland  Great Britain  USA  (106 mi)  2016  ‘Scope  d:  John Carney
I remember the 1980’s with somewhat of a blush.  No man’s hair should be bigger than his girlfriend’s.  But that was the time.  Dublin in Technicolor.  In reality it was monochrome and in the grip of a recession, but on video tape, you could be transported.  You could wear what you liked, and the more outrageous the better.  Anything to wind up the jackbooted skinheads on Dublin’s north side.  Make-up on a boy drove rockers wild, and the teachers wilder.  Thank God for Bowie, who made all the black eyes okay.  And allowed people to find out who they were. My brother gave me the gift of music through my first guitar.  We formed a band.  In truth, at the same stage, U2 were not as good as the kids in Sing Street.  In truth most films you’ll see this year won’t touch Sing Street…
—Bono, U2 Frontman Bono Gives 'Sing Street' A Ringing Endorsement ...

Another musical fantasia from John Carney, former bass player of the Irish rock band The Frames, while also shooting their music videos, and creator of such optimistically appealing films as Once (2006) and Begin Again (2013), films that express how music inspires and changes people’s lives, resorting to a more formulaic boy meets girl narrative this time, yet it still retains the youthful exuberance of impressionable, coming-of-age kids that dream of a better life.  While it has a kind of fairy tale feel throughout, often mixing in wish fulfillment dream imagery, the dire social realist setting at its core grounds the film in Dublin in the 1980’s during an economic recession, where the kids and their parents actually feel stuck in time with no way out.  With the feeling that life has passed them by and left them by the wayside, 14-year old Conor (Ferdia Walsh-Peelo) and his rebellious older brother Brendan, Jack Reynor, easily the best thing in the film, a Jack Black style character from SCHOOL OF ROCK (2003) where an entire film could be made around his character, have to endure the snide comments and constant bickering of their hapless and loveless parents who only stay together for financial reasons.  While Brendan is something of an outcast who stays stoned, holed up in his room with his record collection, his brotherly advice, and exquisite taste in rock music, provides the humor and synergistic push to keep Conor wanting more out of life than anything he ever got.  Like an alter-ego, or a Jiminy Cricket voice of conscious, it’s really Brendan’s dream that Conor follows, beautifully expressed here in a moment of brotherly pride and tough love as he carves out a path for someone else to follow, Sing Street Movie CLIP - Older Brother (2016) - Jack Reynor, Ferdia Walsh-Peelo Movie HD  (1:05).  While Conor is pulled from private school and sent to a nearby public school run by sadistic priests, he is quickly acclimated to the predatory nature of things, where intelligence is ridiculed and bullies prey on the weaknesses of others while priests turn a blind eye.  The innocence of the times, however, is reflected in the earliest stages of the music video, where Brendan is euphoric how music is literally transformed through the power of images, SING STREET - Duran Duran Clip - The Weinstein Company YouTube (1:09).

While Conor quickly gets picked on as well, an easy target as he’s a good student, but he can’t help noticing the daily presence of a gorgeous girl standing all alone, where nobody has the nerve to talk to her, though apparently others have tried but gotten shut down.  So Conor gives it a go, finding her mysteriously alluring, Raphina (Lucy Boynton), asking if she wants to appear in his video, claiming he’s a singer in a local rock band.  Incredulously, she takes an interest, as she turns out to be an aspiring model who could use the exposure.  Like an answer to his prayers, Conor is dizzy with delight afterwards, hardly able to contain himself, setting out immediately in search of a group of musicians to form a band.  Identifying his best friend, the diminutive Darren (Ben Carolan) as the manager, his first recruit is a sensational multi-talented instrumentalist Eamonn (Mark McKenna), who can apparently play any instrument with ease, but serves primarily as the lead guitarist, choosing a black dude Ngig (Percy Chamuruka) simply for his aloofness and look of cool, but the guy can play keyboards.  Before you know it, they rehearse a bunch of 80’s cover songs in Eamonn’s living room and record a demo tape.  But when Brendan hears it, he smashes it to pieces, calling cover music nothing more than junk, claiming if they want to have sex with a girl they’ll have to take chances, claiming rock music is all about attitude and risk, Sing Street Exclusive Clip: The Last Thing the World Needs Is Another Cover Band (1:03).  With that, Conor and Eamonn turn into a Lennon and McCartney writing team, reeling off several original songs, where they finally have a reason to call Raphina and make that music video.  It turns out she knows more than modeling, adding hairstyles and make-up while reshaping the look of the band, even changing Conor’s name to Cosmo, resulting in the raucously hilarious silliness of a song recorded in a back alley somewhere, SING STREET - THE RIDDLE OF THE MODEL Music Video Clip (1:45).  With Ferdia Walsh-Peelo singing on all the songs, the playfulness of the fun they’re having overshadows Conor’s original motivation, finding time to be with the enthralling and strangely beguiling girl.

Conor develops a new persona as Cosmo, suddenly familiar with the likes and looks of Robert Smith in The Cure - Inbetween Days on Vimeo (3:00), M - Pop Muzik (Official Video) - YouTube (3:13), and Daryl Hall & John Oates - Maneater - YouTube (4:24), growing his hair longer, bleaching his bangs and wearing make-up to school, which the priests find an abomination and a direct confrontation to their authoritarian rule, using brutally cruel, strong-armed tactics to force him to capitulate.  While Conor is a somewhat opaque, sympathetic figure, where it’s hard to find offense with anything he does, the more intriguing figures are Brendan, whose musical mind is tapped into throughout, and the elusive beauty of Raphina, whose inner complexity is surprising, as she is always more than she seems, becoming a darker, more tragic figure over time, the damsel in distress that is always worth fighting for.  When Conor reports to his brother that she already has a boyfriend, recalling that they were listening to Genesis in his car, Brendan reminds him, “No girl is ever going to take a guy seriously that listens to Genesis.”  The on-again and off-again relationship that develops between Raphina and Conor exists throughout, always dropping off tapes of his new songs at her door, where she becomes the central force driving his every move even as she disappears for long stretches of time.  Meanwhile the band keeps popping up in their own music videos, creating a lighthearted world of pop fantasy that is continually challenged by the more searing realism of the times, where the songs represent the only affirmative hope to be found anywhere in the vicinity, SING STREET - BEAUTIFUL SEA Music Video Clip YouTube (1:12).  These kids want nothing of the drab world surrounding them, where the romantic inclinations between Conor and Raphina grow more magically surreal, where the delirium of teenage love exists largely in the delusions of the imagination, where some of the more brilliantly conceived scenes are just the two of them alone, where the line between fantasy and reality continually co-mingles.  One of the better set pieces in the film shows the band playing at the senior prom, creating a song that is beat-for-beat the same rhythm section as “Maneater” in Drive It Like You Stole It - YouTube (3:37), where what exists in Conor’s head grows to ecstatic dimensions, always infused with a hyper-realistic romanticism that becomes the guiding light of the film, idealizing a kind of world one hopes and dreams for, as opposed to the one they inevitably find themselves stuck in, SING STREET - Adam Levine "Go Now" Music Video - YouTube (3:50).  With a belief that brighter days are ahead, the magical realism of the finale is as tragically naïve as it is exhilarating, where one is left in a euphoric haze of youth and unbridled enthusiasm.
Posted by Robert Kennedy at 12:00 AM