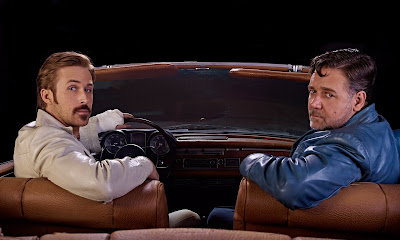 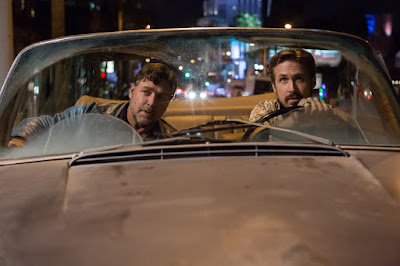 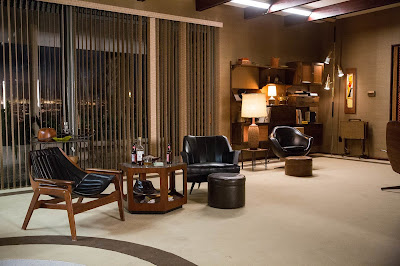 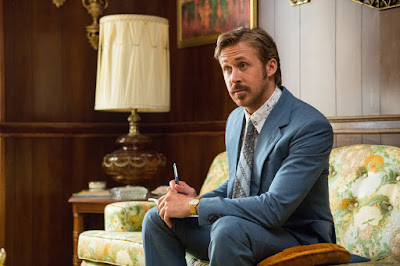 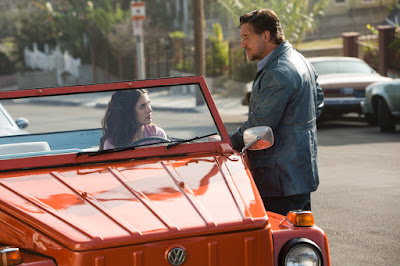 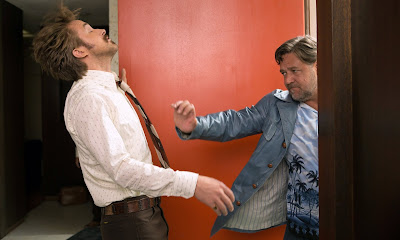 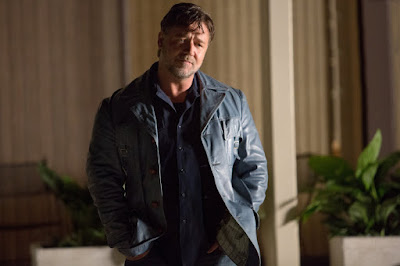 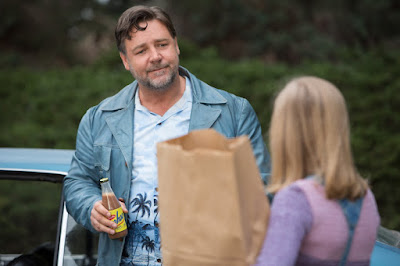 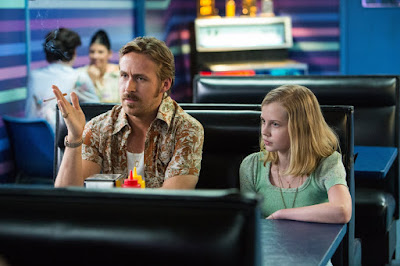 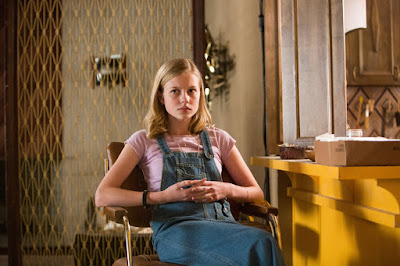 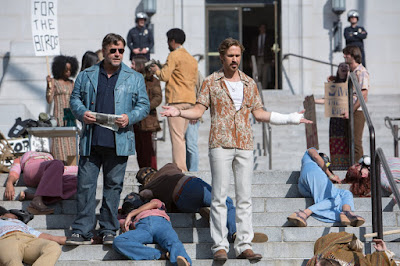 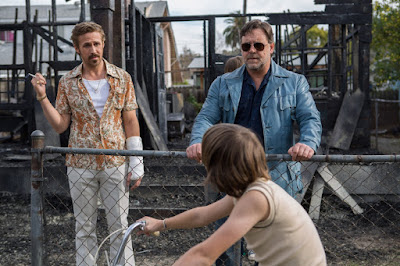 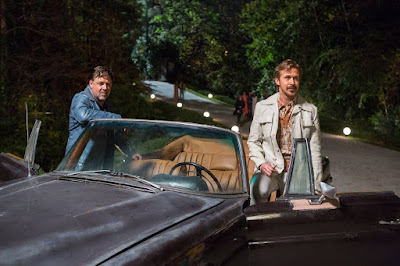 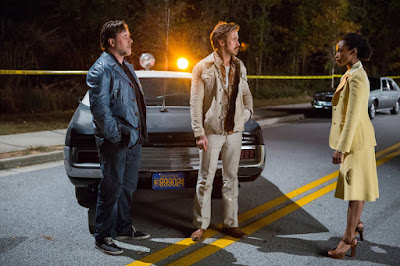 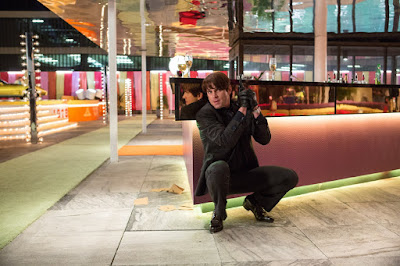 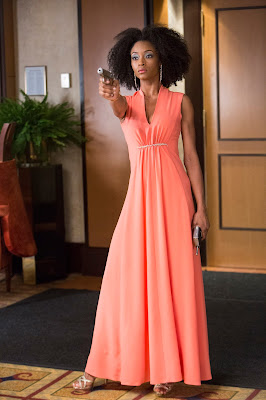 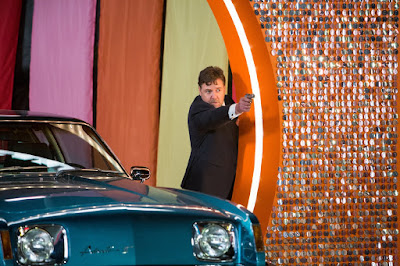 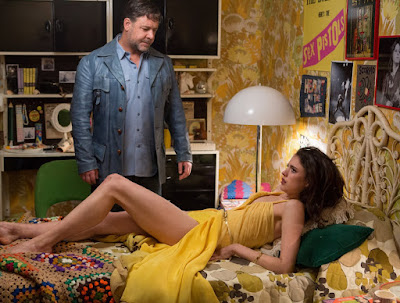 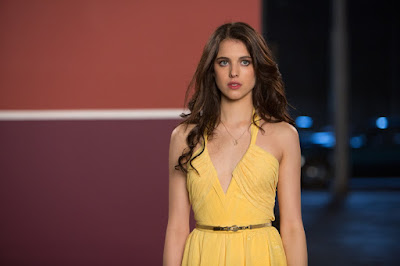 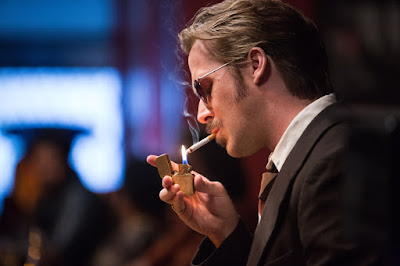 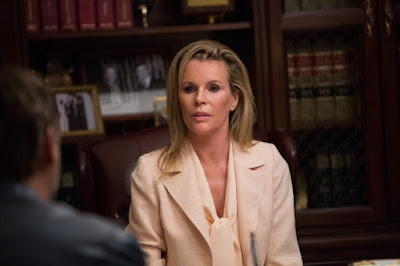 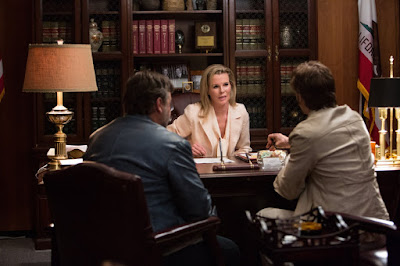 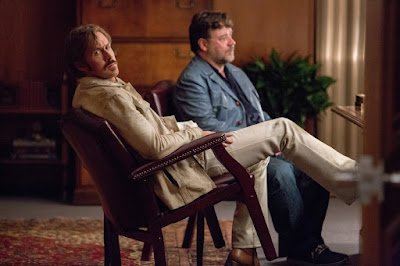 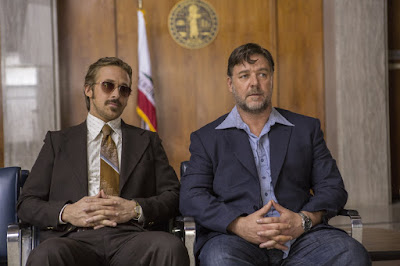 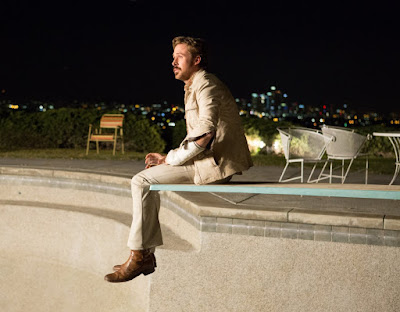 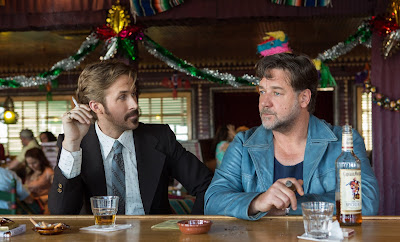 With a tribute to Isaac Hayes and the long intro of the musical theme from SHAFT (1971), the film opens in a soulful groove of Norman Whitfield’s incredible musical arrangement of Papa Was A Rolling Stone (UNCUT) - The Temptations - HQ (12:04), one of the more recognizable intros, featuring the kind of extended psychedelic arrangement that takes you back to a distinctive place and time, that existed in a brief window of time before it was extinguished.  What follows is an introductory prologue that sets the scene of pure lunacy, a kind of adolescent porn fantasy that springs to life when a kid in his pajamas steals his dad’s porn magazine and eagerly examines the merchandise before a car comes tumbling down a hill straight through the house before coming to a stop nearby.  The kid checks out the accident scene where a well-endowed, completely naked porn star named Misty Mountains (Murielle Telio) is laying on the hood of the car, who is, in fact, the exact same centerfold he was just examining.  Covering her with his pajama top, she murmurs a weird expression just before she dies, “How do you like my car, big boy?”  Set in a pastel, candy-colored universe of Los Angeles in 1977, the film is a comic spoof, a throwback to the noirish detective stories driven by pulp fiction writers, though in this case, two unlikely private eyes team up on a case of common interest, though they loathe each other, with both teetering on the edge of sleaze and moral depravity themselves, where they’re actually a couple of numbskulls that find themselves using screwball comedy dialogue while searching for the elusive bad guys through the stench of regular smog alerts, professional hit men, and layers of entrenched corruption at the Justice Department.  Basically a showcase for the acting skills of Russell Crowe and Ryan Gosling, both wearing Hawaiian or paisley shirts with leisure suits, we witness the hard edge of a somewhat overweight Crowe as Jackson Healy, who narrates his opening scene, where his specialty as a heavy is roughing people up for a living, sending a message of warning that they should stay away from certain individuals unless they wish to receive another house call.  Paralleling his introduction, Gosling as the goofy, mentally challenged Holland March agrees to take the case of an elderly woman reporting a missing husband, who hasn’t been seen since the funeral, though an urn with his name attached is sitting on the mantle.

Shortly after the car accident, March is approached by Mrs. Glenn (Lois Smith), the nearly blind aunt of the recently deceased Misty Mountains, who insists she saw her niece several days after her reported death alongside her friend Amelia (Margaret Qualley), but they vanished before she could pursue them.  Skeptical of her claim, though curious about her sidekick, March agrees to take the case, though he’s pretty sure he can verify a dead body.  Simultaneously, a young girl (Amelia) is seen chatting with Healy, claiming some guy has been getting too close to her, and before you know it, Healy arrives on the front door of March, giving him the standard treatment before grabbing one of his arms and instructing him, “When you talk to your doctor, tell him you have a spiral fracture of the left radius.”  Later that evening, a couple of mob guys, Blue Face (Beau Knapp) and his older partner Keith David, are lying in wait for Healy, with the duo also looking for Amelia, turning into a raucous skirmish of heavy blows before Healy finds a hidden shotgun and sends them fleeing.  Finding himself back at March’s front door, March, now wearing a cast, is not exactly happy to see him, where his precocious thirteen year old daughter Holly (Angourie Rice) acknowledges, “Isn’t that the guy that beat you up, Dad?”  Making amends at a local diner, they try to figure out their situation of finding Amelia before the mob does, where Holly reveals her personal misgivings about her father’s working methods, as he routinely swindles his clients out of extra days, claiming he’s onto something even as he has nothing to show for it.  Both these guys are scumbags of the lowest order, yet their appeal is their humorous back and forth banter, where they’re fuck ups even when they try to do good, yet Holly, bright and intelligent, is easily the best thing in the film, actually showing them up throughout the film, and turns out to be the voice of conscious for both of them, continually sticking her nose in their business, despite her Dad pushing her out of the way.   What they discover is Amelia was working with Misty Mountains on an experimental porn film called How Do You Like My Car, Big Boy?  The filmmaker named Dean, along with Misty, both turn up dead, with Dean mysteriously dying in a house fire, while the producer, Sid Shattack, is having a glamorous Hollywood party where all interested forces converge.

Decorated in costume glitter with all manner of Hollywood weirdos and perverts, they fit right in, weaving in and out of the opulence of the party, with March taking full advantage of the free drinks, pretty much getting plastered, literally stumbling upon the dead body of Shattack while Holly is the one that actually discovers Amelia, but falls into the hands of the killers as well, who are also there trying to kill Amelia while acknowledging a hit man named John-Boy (Matt Bomer) has been hired to eliminate any and all witnesses.  It gets a bit convoluted and ridiculous at the same time, including murders and miraculous escapes, especially when a sharply dressed black woman Tally (Yaya DaCosta) arrives on the scene and our tag team of private eyes are suddenly directed into the offices of a high ranking official in the Justice Department, none other than Kim Basinger as Judith Kutner, Amelia’s mother, (remember Basinger worked so well together with Russell Crowe in his 1997 breakout movie, LA CONFIDENTIAL), who claims her daughter is so delusional and paranoid that she thinks her own mother is out to kill her, asking for their help in returning her back home safely, as otherwise she’s falling into the hands of the Las Vegas mob as they attempt to expand their pornography ring into Los Angeles.  It only grows more ludicrous, where there are shootouts at an airport hotel and a miraculous discovery of Amelia, who reveals to them that it’s the film they’re after, as it exposes all the precious little secrets about a corporate exposé involving the Detroit auto industry, air pollution, and their collusion to suppress the supposed effectiveness of a bogus catalytic converter that regulates exhaust emissions.  In disbelief, March inquires, “So let me get this straight:  You made a porn movie in which the point was the plot?”  With Detroit behind all the evil machinations, where better to promote their product than the high rollers and corporate executives attending the Los Angeles Auto Show?  With the porn and auto industries blending into one, with dueling party sequences along with slogans like “What’s good for Detroit is good for America,” a manic hit man on the loose, and a mafia-like conspiracy theory suppressing the truth, it’s only fitting that everyone’s trying to get their hands on that little porn film which will expose the truth.  As preposterous as it sounds, it all leads to a giant shoot ‘em up sequence, where a decent comedy is infiltrated by excessive violence that feels obligatory and necessary for an American audience, where it remains contrived and cartoonish throughout, like something that exists only in the movies, bearing little resemblance to reality, yet has become so commonly accepted in the movie world where we’ve simply gotten used to vulgar, overglossed Hollywood fabrications, the bigger the better (Trump, anyone?), where most have grown numb to it after a while, but the point remains it’s completely unnecessary in a movie like this that is so character driven, as the heightened levels of humor are the real story, but somehow the intimacy gets lost in the hyperbolic exaggerations.
Posted by Robert Kennedy at 12:02 AM