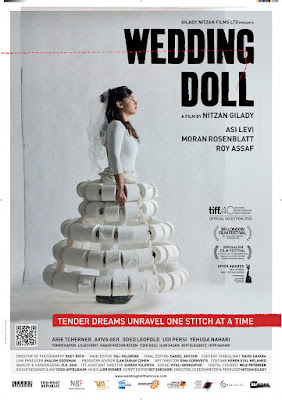 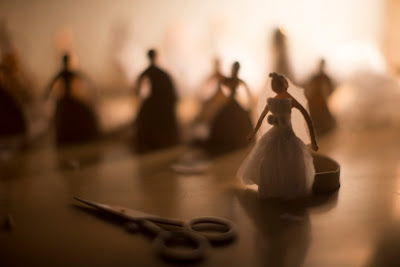 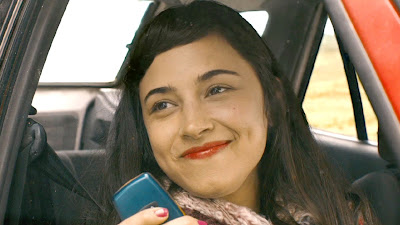 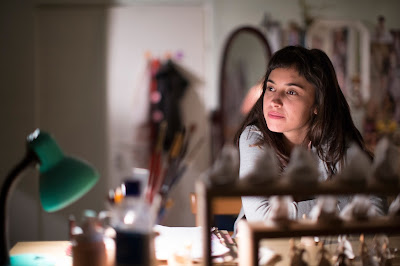 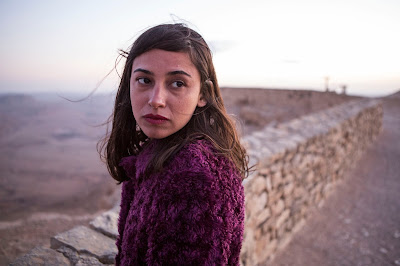 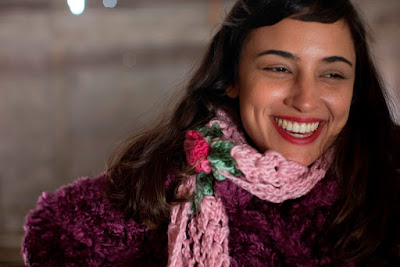 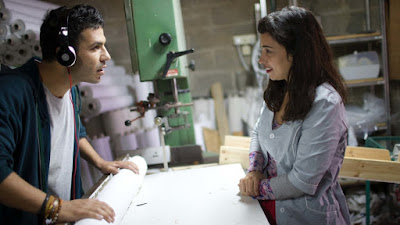 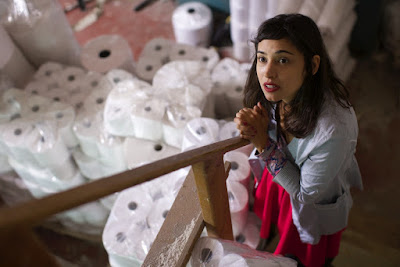 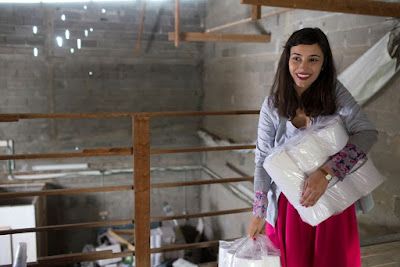 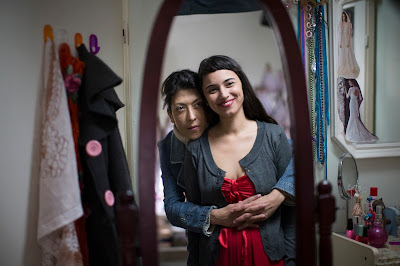 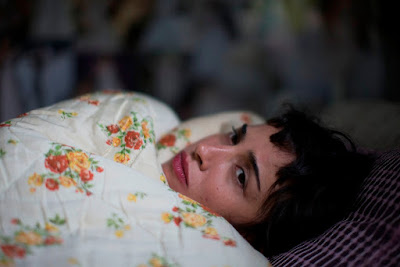 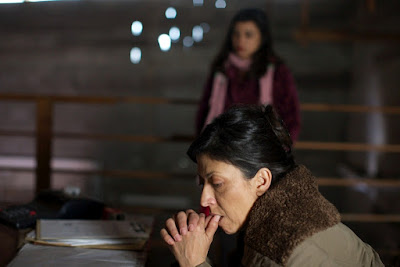 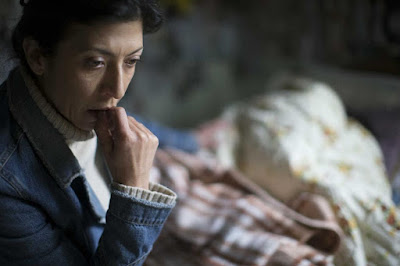 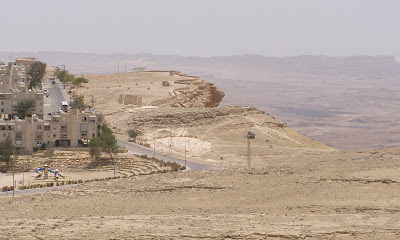 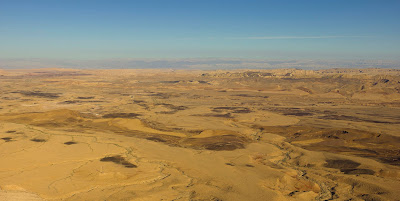 Sort of a cross between the emotional fragility of The Glass Menagerie and the societal brutality shown to those who are different in WELCOME TO THE DOLLHOUSE (1995), featuring the travails of an attractive young special needs adult, Hagit (Moran Rosenblatt), whose mental deficiencies and childlike innocence are seen throughout, with a broad, engaging smile that greets nearly everyone, or her angered frustration with her mother, Sara (Assi Levy), whose everpresent, watchful eye prevents the kind of emancipation Hagit desires.  Relentlessly picked on by other kids in the neighborhood who continually tease her and call her names, where in an earlier incident she was traumatized when badly injured from a cruel incident, something her mother has never forgotten, so she tries as best she can to protect her from the outside world.  The problem, of course, is that the more she shelters her daughter, the greater her need for independence, as she’s happiest out on her own.  The film opens in a fragile and delicate world of Hagit meticulously constructing tiny dolls, usually representative of a bride or groom, as there are photos of wedding gowns surrounding the walls to her room.  One might say she is obsessed with the subject, as she dreams of getting married, thinking she would finally be free of the suffocating presence of her mother.  Yet time and again, we see her mother bale her out of unfortunate circumstances, where she obviously has her best interests at heart, but Hagit is smothered by her incessant, overly cautious restrictions, even going so far as turning her mother’s alarm clock off in the morning and sneaking out of the house on her own, only to be found waiting at a bus stop or walking down the road when her mother pulls up to offer a ride, knowing how easily it is for her to get hurt, as she is continually taunted and harassed by mean-spirited kids.  She does have a job to go to, where she works in a tiny toilet-paper factory, where the kindly owner Aryeh (Aryeh Cherner) is aware that he is “helping” her, allowing her in turn to help package his products, while his son Omri (Roy Assaf), seen cutting larger rolls stretching nearly ten feet into smaller more usable products, is just about the only other company employee.  Surprisingly Hagit flirts with him all the time, giving him the most recent doll that she made, where they can be seen kissing behind the scenes, unbeknownst to the owner.

While there is a predictable structure to the film, edited throughout as a horror film, where from the outset the audience is waiting for some horrible unforeseeable event to occur, the filmmaker is content to postpone the inevitable until the end, constructing a growingly familiar world around the central figure, while at the same time offering a behind-the-scenes glimpse of the life Sara is secretly hiding from her daughter, as she receives nightly phone calls from an interested boyfriend admirer who would obviously like to spend more time with her than she allows, as she’s required to look after Hagit.  While it’s clear she’s sacrificed her own life for Hagit, but as she grows older, she’d like to think she could have a life all her own as well.  Hagit presses her for independence, yet when she gives it to her, such as leaving her alone to spend the night with her friend, Hagit is never far from her mind, never knowing what to expect when she returns, as she’s haunted by the possibilities, where it only takes a single incident of inflicted horror to damage her life forever.  The one element of surprise is the remoteness of the location, set in Mitzpe Ramon, a small town on a ridge overlooking the Negev Desert, where the scenery is spectacular, including the presence of wild Nubian ibex running free.  Home of the 500 foot deep Ramon Crater, one of Israel’s largest national parks, it contains a natural water source to sustain the animal population, with the crater created by eons of natural erosion, as the region was once covered by an ocean millions of years ago, while now the town supports a tiny population of less than 5000 residents.  Omri has a habit of throwing pebbles on Hagit’s window, which is a sign for her to meet him out on the cliffs overlooking the enormous expanse of the desert, where the vast emptiness may as well be a metaphor for her seemingly unobtainable idea of romance.  To Hagit, Omri’s love is real, where she expects they will be married one day, so she roundly rejects the friendship of other special needs male companions that her mother arranges to come and visit.  Her refusal to even come out of her bedroom during visits is hurtful to the other boy, who has to face his own constant stream of societal rejection.

While the film fully explores the lives of mother and daughter, Sara, burdened with the responsibility to care for Hagit, is unable to spend much time with her married son Chen (Tomer Kapon) and his newborn baby, whose own views towards his sister are somewhat backwards, believing she belongs in an institution or a group home, still stinging apparently from an incident where Hagit nearly dropped his baby, unable to summon the trust afterwards.  These same thoughts run through Sara’s mind as well, constantly wondering what’s best for Hagit, visiting group homes and trying to imagine her daughter living there, where it’s a daily struggle to face her daughter’s constant resistance to her concerns.  Making matters worse, the factory is continually losing money, so despite Omri’s assurances to Hagit, believing he can change his father’s mind, the factory will be closing soon.  Searching for work elsewhere provides one of the saddest moments of the film, as she applies for a job in a store that sells wedding attire, supposedly the idealization of all her dreams, but they’re looking for a seamstress, while Hagit simply imagines surrounding herself with all the beautiful things in the store all day long, quite a stark contrast to the more crude conditions of a toilet-paper factory.  When the store never calls back, she thinks there’s something wrong with her phone, instead, they simply filled the position with someone who could actually do the job they were looking for, a reality that Hagit can never truly comprehend, as she constantly lives in her dreams.  When the film pivots into Omri’s world, it takes a turn for the worse, as his friends routinely call Hagit a “retard,” making fun of Omri for even hanging out with her, where their unsympathetic nature is ugly and crude, reflecting a miserablist view of humanity that exists throughout the film, where outside of Hagit’s dreamlife are vile haters and mean-spirited people who wouldn’t think twice about having fun at Hagit’s expense, making her the butt of all jokes.  This descent into savage cruelty is not altogether unexpected, but is difficult viewing for the beastly inhumanity on display, where guys think mocking others weaker than they are is just hilarious, getting drunk while feeling her up, even stupidly thinking they’re giving her a good time.  She’s terrified at the craven depravity she’s forced to endure before running away, where the audience has to wonder where can she ever be safe from this coarse treatment, which is the central question asked by this film all along.  While there are no easy answers, this film dwells on the misanthropic, offering little hope in human progress.  The film won the FIPRESCI prize for best Israeli first film, also best first film overall, and best actress for Assi Levy as the mother at the Jerusalem Film Festival of 2015.
Posted by Robert Kennedy at 12:00 AM