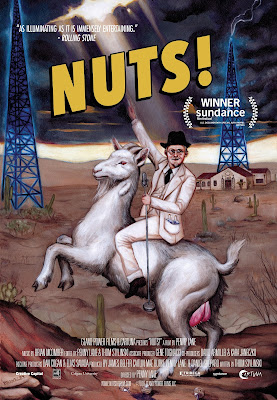 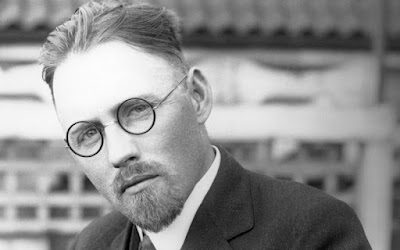 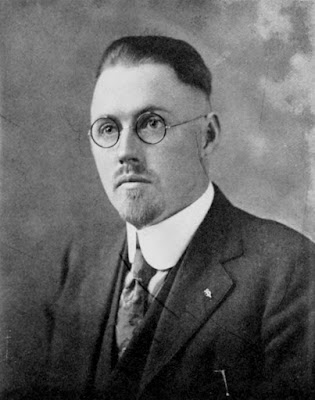 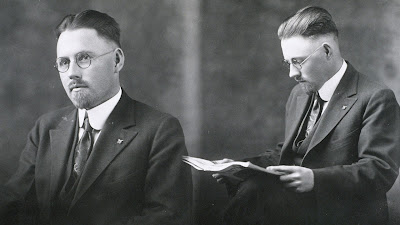 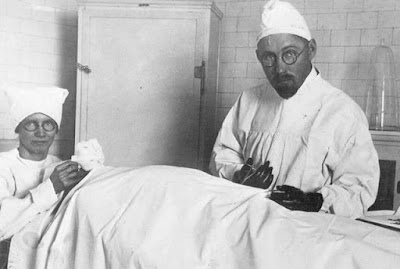 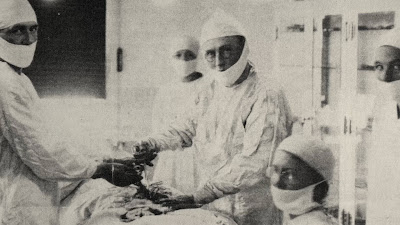 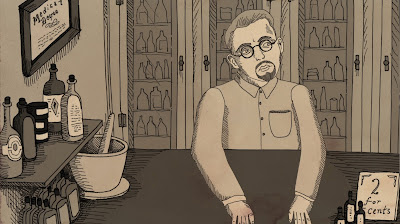 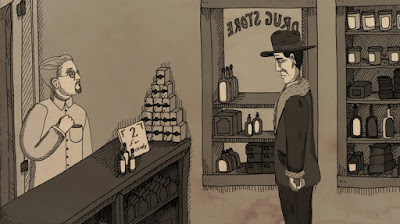 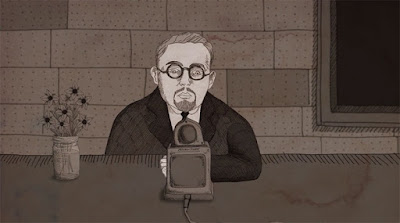 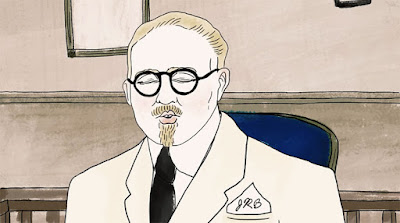 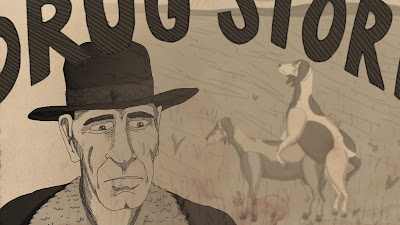 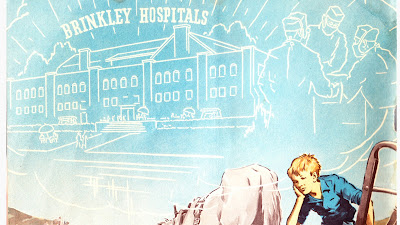 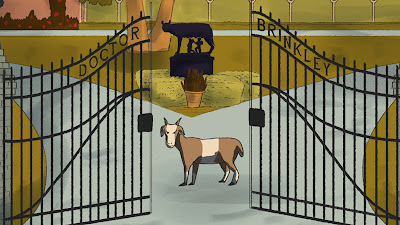 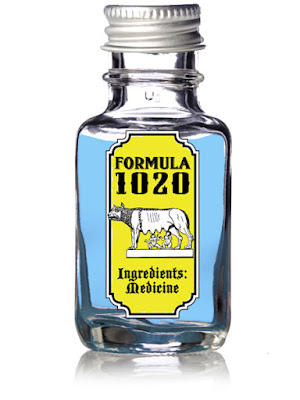 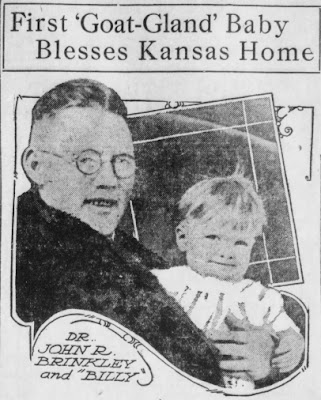 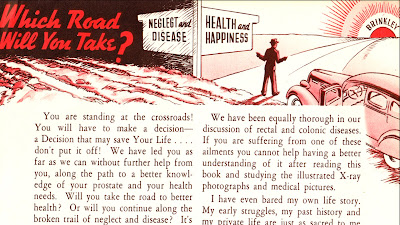 
An irreverent film with such a preposterous opening message that one immediately assumes this is a mockumentary, a completely made-up documentary profile in order to garner laughs, told with a certain flair that distinguishes it from most documentaries, yet as it moves along, the profile of the central figure remains the same.  Instead of being a con job, it’s actually a film about one of the more notorious con men in American history.  Ironically the film was seen on the same night that Republican candidate Donald Trump accepted the convention nomination for President of the United States.  At least to this viewer, the subject was one and the same, as this film documents one of the original snake oil salesmen that used his blatantly false advertising prowess to sell millions of dollars of worthless medical products over his own radio station during the height of the Depression, yet he was also one of his state’s most respected citizens, viewed as a pillar of the community.  The film documents the rise and fall of Dr. John Romulus Brinkley, an American hero that constructed a fictional biographical account of his life as he rose to fame and fortune, similar to the character McTeague in Greed  (1924), who got his start as an apprentice to a traveling dentist con artist named Dr. Painless Potter, eventually establishing a successful practice for himself, though he had no medical certificate.  That wasn’t a problem for Brinkley, who simply falsified a diploma from the infamous Eclectic Medical University in Kansas City, allowing him to open up shop in the small, still undeveloped town of Milford, Kansas (the town was subsequently destroyed, as the grounds were flooded from the construction of a nearby dam) selling various medicines off the shelves in a dusty town of less than two hundred residents.  According to the legend, a customer came into the office seeking a remedy for male impotence, with the customer claiming he was unable to have children after a decade of trying.  The customer was persistent, refusing to accept that there was no medical cure, while at the same time looked out the window to see a Billy goat having sex with another goat, wondering if he could be implanted with the goat’s sexual glands.  Intrigued at the prospect, the good doctor was willing to give it a try with such a willing patient by performing the first-of-its-kind surgery, with the patient pleased to report afterwards that his wife got pregnant and they were happily expecting their first child.  With this success story, Brinkley built an empire by successfully promoting his own goat-testicle impotence cure.


One of the first things he did was build a radio tower in town, opening a high-powered radio station which was programmed with country music, also the first of its kind, speaking for hours each day, literally flooding the airwaves with advertisements selling his various medicinal products as home remedies for just about any ailment you could name, attracting patients from all over the globe, which helped him amass a fortune.  In doing so, he helped install electricity in town, build a post office to handle the massive amount of mail sent to him, but also sidewalks, a town library, and a new sewage system, while also opening a hospital clinic to treat his patients, eventually expanding to clinics and hospitals in several states.  In this manner he became viewed as a valuable and upstanding citizen, beloved by the people in Kansas, which protected him from federal agents looking to arrest him for obtaining a bogus medical license, as the governor of Kansas refused to extradite him since he brought so much money into the state.  As a result, he was considered untouchable, where the broad reach of his radio show kept him in business.  One of his most successful devices was issuing medical advice over the radio, where he would read listener’s medical complaints on the air and dispense recommended medicines to cure their reported ailments, opening a series of pharmacies that sold his products exclusively while also establishing a highly successful mail-order business.  While there is a certain amount of archival footage that looks more like home movies, where there is footage of Brinkley and his wife playing with their young son, but also living a luxurious life of splendor as they travel the world on ocean cruises.  Like The Great Gatsby (2013), he became known for hosting lavish parties, where among his clientele were William Jennings Bryant and Rudolph Valentino with a product that predates Viagra, becoming something of a state celebrity.  But as there is insufficient material to make a movie, the director makes a clever choice, using animated sequences to fill in the narrative, with different animators drawing different sequences, where the change of pace is highly appealing, using a mix of archival footage with animated reenactments, interviews with historians, and a hilariously offbeat, and completely unreliable narrator (Gene Tognacci).  The lead-up to his success is strikingly original, including a sequence mocking the famous goat gland cure in a Buster Keaton short, COPS (1922), where this constant shift in stylistic point of view is immensely entertaining, all told with an upbeat tone of affirmation and optimism, where Brinkley is seen as an innovator, where you almost wonder why we never heard of this guy before, as his influence and reach is astounding, making him the television evangelist of the radio era.


But the euphoric mood quickly shifts when the American Medical Association (AMA) starts targeting him, specifically Morris Fishbein, a physician who became editor of the Journal of the American Medical Association, a man who built his reputation on exposing medical frauds, stripping Brinkley of his license to practice medicine in Kansas, calling him a charlatan and a quack in their medical journals.  Undeterred, Brinkley moved to the state of Texas, building another radio tower, this one on the other side of the border in Mexico, creating a million-watt signal that was so strong it could still be heard in Kansas, broadcasting to the entire United States, along with 16 other countries, easily the most powerful radio channel anywhere in the world at that time, also building a new hospital where he and his wife lived on the upper floor.  Brinkley also sued Fishbein and the AMA for slander, claiming he had dozens of patients who were happy to testify on his behalf as they were completely satisfied with the results of his medical treatment.  However the judge ruled their testimony out of order, as they were not considered legitimate medical experts.  Nonetheless, Brinkley had a dream team of legal advisors outnumbering the AMA that only had a single lawyer.  But that lawyer was extremely effective at cross-examining Brinkley on the witness stand, challenging each and every supposed medical advancement as little more that fakery and fraud, skillfully exposing the lack of medical benefits from using his products, where the purported medicine was often little more than water and colored dye, yet he charged an outlandish fee of $100 per bottle.  It became clear that Brinkley was sociopathically delusional about his own abilities, performing surgeries that had no medical effect whatsoever on one’s well-being, offering placebos for actual medicine, while amassing a fortune for offering little more than a false promise.  It’s a devastating takedown, with Brinkley unwittingly cooperating in bringing about his own downfall, reluctantly acknowledging earning $1.2 million dollars for himself in just one year during the heart of the Depression.  Had he been a real doctor, he would have shared his success stories with the world of science, which routinely acknowledges breakthroughs in medical advancements, but there was nothing to share, as he was never an actual doctor to begin with, but did fool the public with ingenious advertisement campaigns that were little more than personal get rich quick schemes.  He built for himself a mountain of publicity, which could then be used as evidence against him.  What followed afterwards was a series of lawsuits for malpractice and fraud, eventually exposing Brinkley as a quack, exactly as he had been described in the medical journals.  It’s a sad end to what amounts to a mythical rags to riches American Dream story, ending in the tragic fall when Icarus flies too close to the sun.  Ironically, that abandoned radio tower in Mexico became the site of disc jockey Wolfman Jack’s infamous introduction of rock ‘n’ roll music on the radio, which in the 50’s and 60’s was still the most powerful signal in North America.
Posted by Robert Kennedy at 12:58 AM