Samuel In the Clouds 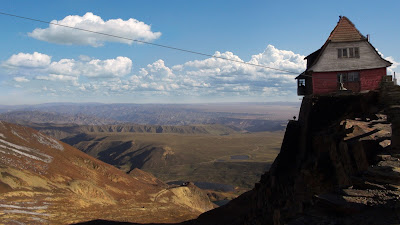 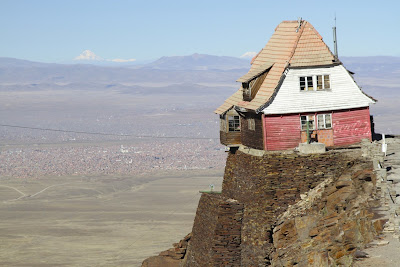 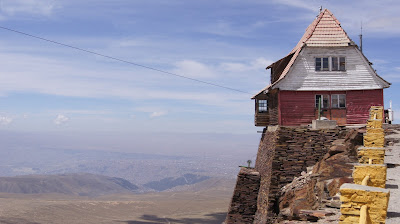 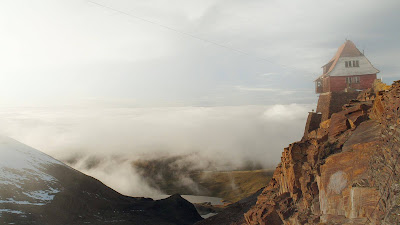 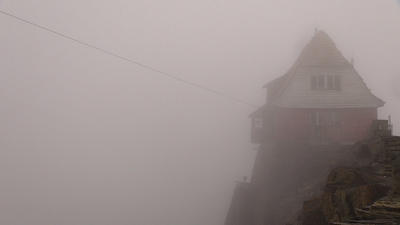 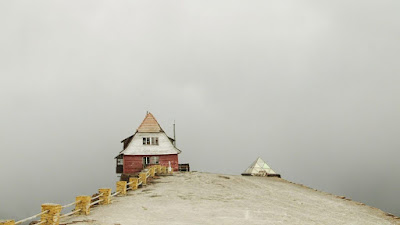 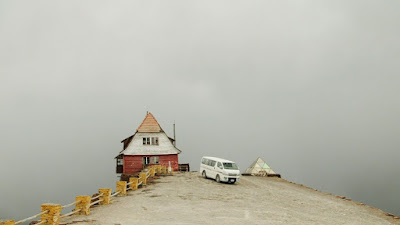 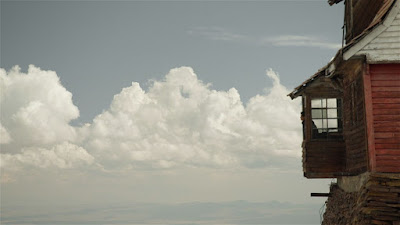 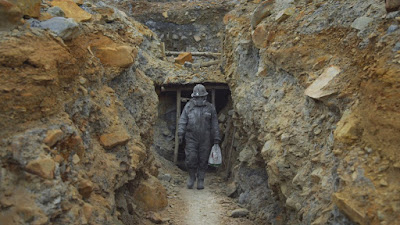 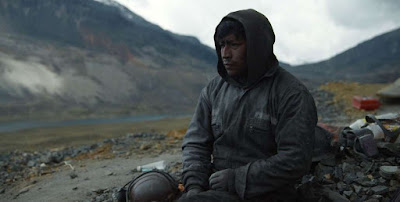 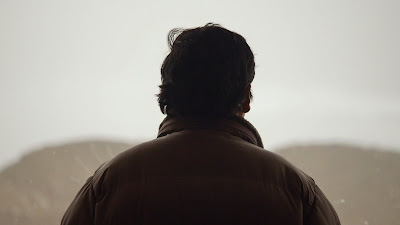 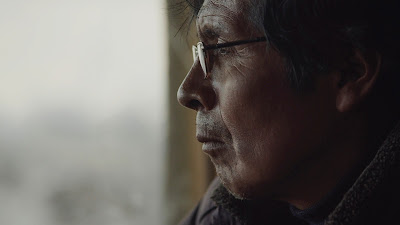 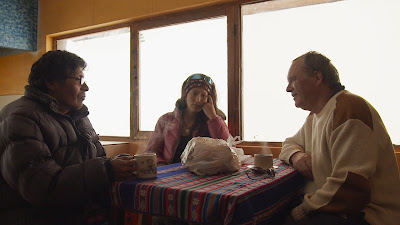 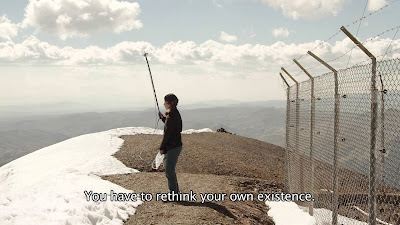 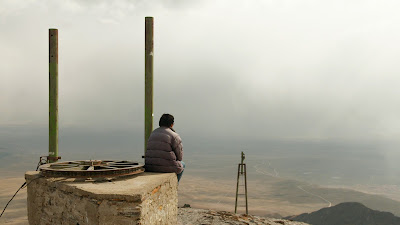 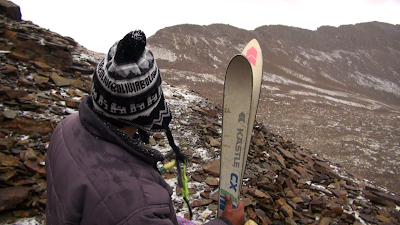 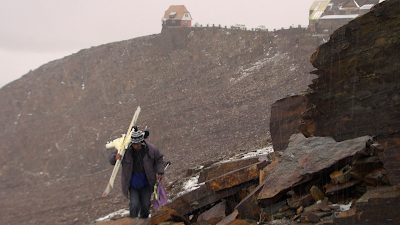 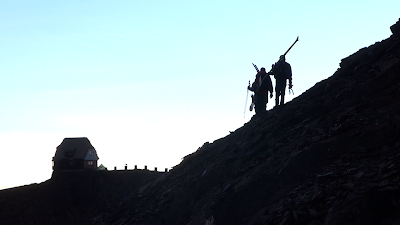 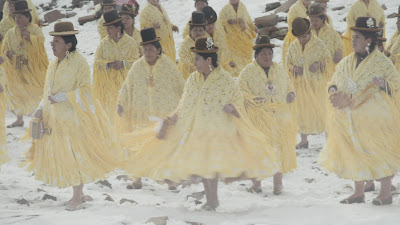 
A North American premiere, an especially spare and meditative film that finds fascination with a particular mountain, the Chacaltaya (bridge of ice, or cold gate in the Aymara Indian language) that measures at 17,785 feet in Bolivia (higher than the Mt. Everest base camp), just 20 miles from La Paz, a city with a metropolitan population (including neighboring towns El Alto and Viacha) of over two million people.  What’s particularly unique is that there is a road where cars can drive to 17,115 feet, a practice of many mountaineers, where they simply have to climb the last 660 nearly vertical feet to the summit.  It’s also home to what was once the world’s highest ski resort, as a ski lift was installed in 1939, running with a car engine, where the ski season was from November to March each year.  We are introduced to Samuel Mendoza, an Aymara Indian who lives with his family in El Alto, as he is the only surviving employee of the Club Andino Boliviano, the Bolivian national ski club that used to organize South American championships to determine the best skiers from Argentina, Chile, or Colombia on the highest slope in the world.  Since he was a small child, Samuel only had to look up, as he could see the top of Chacaltaya, the mountain where his father worked, as did previous generations of his family, where it was always covered by a crest of white snow.  Samuel and the Aymara believe in ancient mountain spirits, or Achachillas, wise grandfathers who belong to Mother Earth and protect their children, so they make offerings to the gods and offer prayers.  Nearly every day the 52-year old Samuel walks the four-hour, nine and a half mile hike to the top of the mountain from his home, leaving before daybreak, working long hours at the lift, helping tourists or anyone interested how to ski, then walking home again at night for another four hours, as he has done for the past 30 years.  But something happened in that period of time, as the snow on the glacier completely disappeared after 2009, leaving behind only a sandy soil.  Without the snow, the skiers are gone, as only a handful of tourists show up, or a collective of scientists measuring the air quality.


Despite being the lone witness to the disappearance of the glaciers, Samuel does not believe in global warming, and prays that the snow will somehow return to the top of the mountain.  Climate experts predict that the disappearance of the glaciers in the Andes Mountains will lead to severe water shortages in the region that could affect as many as 80 million people, where already Bolivia’s second largest lake has dried up and disappeared (Bolivia's Lake Poopó Disappears : Natural Hazards).  Since 2011 the world’s highest scientific air monitoring station was built on Chacaltaya peak that includes a collection of research groups from France, Italy, Germany, Sweden, and Switzerland, all part of the Global Atmospheric Watch that measures changes in atmospheric composition, monitoring of gases, characterization of particle properties, as well as radiation and meteorology, conditions for which the world has yet to provide any real solutions.  Even as several scientists regularly visit with Samuel, they are only a part of the mountain’s mystery.  Other families have been mining the mountain for minerals such as tin or zinc for decades, where individual families own certain mines that as the year’s progress dig deeper and deeper into the heart of the mountain.  Interrupting the quiet calm of the view from the top are intermittent dynamite blasts that can be heard throughout the film.  At the very top is an old wooden house sitting precariously on edge, with windows looking outwards in all directions, a place where Samuel can prepare a pot of mate, offering cups to any guests that arrive, while still housing all the old ski medals and sports memorabilia.  Several of the recent arrivals are experiencing altitude symptoms, feeling light-headed and faint, with racing heartbeats, as the body takes some serious adjustments to sudden changes in altitude, as there is less oxygen in the air.  Many Olympic and world class athletes train in these conditions, hoping to increase their endurance by forcing their bodies to produce extra red blood cells, which aids in the delivery of oxygen to their muscles.


It rarely snows at the top of the mountain anymore, yet Samuel recalls as much as 3-feet of snow would accumulate overnight.  The director was fortunate to be filming for the first snow in eight years, where people had to learn how to get used to it again.   Cars and tour buses had to be pushed out of snow banks, emptying the passengers, who then had to climb their way up the mountain.  On this occasion, a bus was delivering a group of musicians, but also another group of performing dancers, including women in brightly decorated native costumes.  After hiking up the mountain in the snow, they performed outdoors in the snow, as planned, creating a colorful, celebratory festivity.  The mood of the mountain changes throughout the film, engulfed in a mist of fog or snow, capturing the sunrises and sunsets from distant horizons, or simply offering an awe-inspiring view from on high, as the mountain provides a view of the world one rarely ever sees, becoming a picture of meditative serenity.  Samuel sadly points out the spot where his father fell off the cliff and died, indicating there was no safety netting or railing in those days, where accidents were more commonplace.  He also makes a calling sound for an eagle that drops out of the sky onto a wooden ledge at the side of the cliff, where a wild animal becomes a constant companion.  Still, it’s the image of the little rickety house sitting atop the mountain that holds the most fascination, sitting on a precipice, reminiscent of Chaplin in THE GOLD RUSH (1925), where he has to run to the other side of the cabin to keep it from tipping over and tumbling down the mountainside.  The mountain seems to defy time, standing firm for several million years, yet now suddenly at the center of a great warming trend that could have dramatic effects on the next generation of human life.  Yet, like Samuel, people tend to not want to believe these things will happen, remaining resigned to the inevitable course of nature for incidents like storms, famine, or flood, but this new possibility remains out of sight, something most people prefer not to think about, perhaps still hoping for the best.  It recalls a meditative line from a Donovan song, “First there is a mountain, then there is no mountain, then there is,” where something so obvious gets lost from sight, such as the view of a mountain when you are on a journey struggling to “climb” the mountain, yet once you reach the top, everything is clear again.
Posted by Robert Kennedy at 12:02 AM