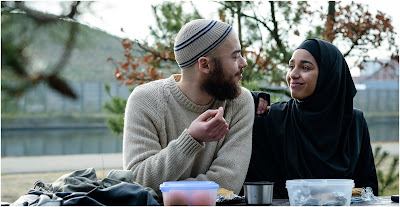 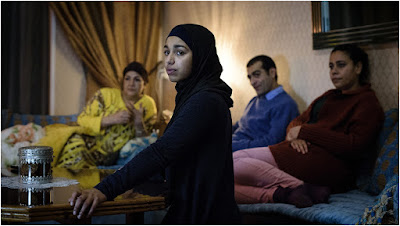 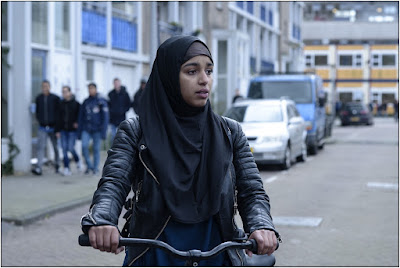 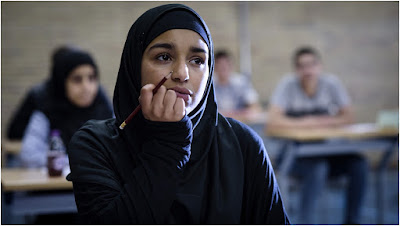 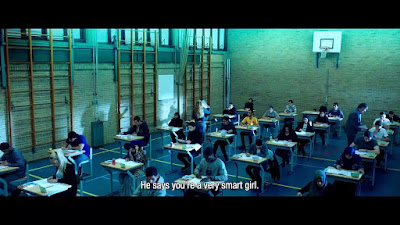 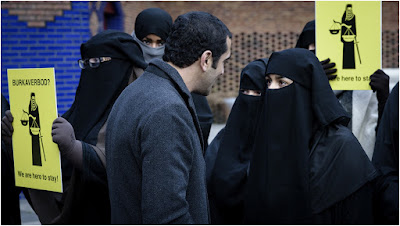 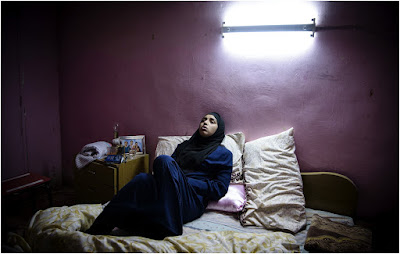 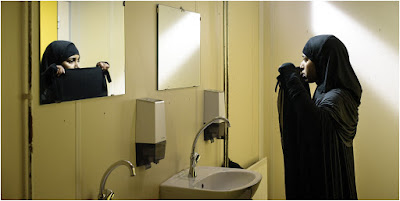 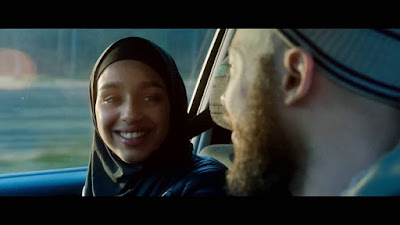 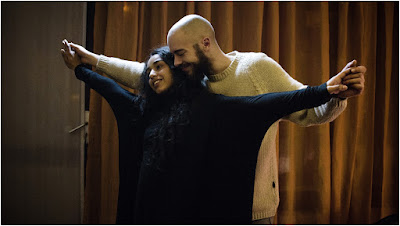 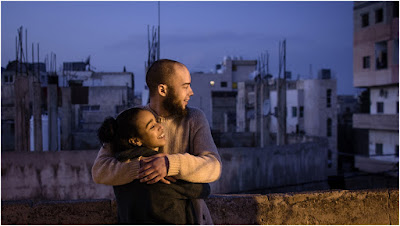 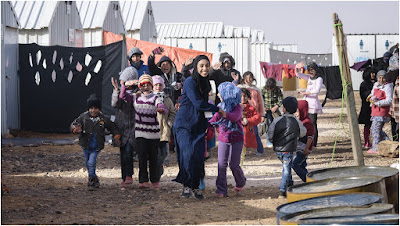 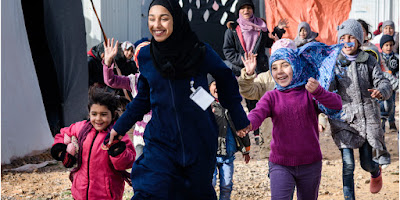 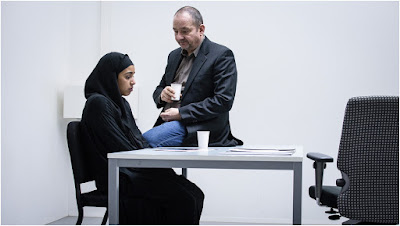 
It’s hard to make topical films, especially when the screen reality doesn’t match the authenticity of on-the-ground news reports of terrorist attacks, police crackdowns, angry demonstrations, or following the hordes of refugees swarming into Europe, not to mention those citizens left behind in the war zones and refugee camps.  It’s a searing reality that is difficult to digest, no matter how meticulously accurate the newscasts may be.  But as links to terror organizations have been discovered within major European cities, it has led to an accompanying rise of Islamophobia, including burkini bans on French and Corsican beaches, leaving people wondering how local citizens are being recruited into jihadist organizations, where this film attempts to answer some of those questions.  Dutch director Mijke de Jong, with a script written by her husband Jan Eilander, combine their efforts in a story studying the roots of the problem.  Set in Amsterdam, Layla (Nora El Houssour) is an 18-year old student studying to become a doctor who is a Dutch citizen with a Moroccan background, living at home with her middle class Muslim family.  While her parents, including her father (Mohammed Azzay) and mother (Esma Abouzahra), encourage her to follow a promising educational path that will lead to a better life, she gets more distracted by the way Muslims are treated differently than ordinary Dutch citizens, as they are profiled simply by their appearance, labelled agitators by referees in local soccer matches, and routinely singled out and arrested by police for practicing free speech, even getting into a heated discussion with a fellow student when asked not to pray, to the point where she feels ostracized by society.  As she explores her Muslim background, she devotes more of her time studying the Quran, where she learns to identify radical phrases, scours the Internet for YouTube coverage of attacks on Muslims throughout the country and atrocities to Muslims around the globe, which she immediately shares with her friends and family, and is disappointed by the timid reaction by her parents, who lead a comfortable life and don’t make waves.


What’s clear, at least in this film, is that she comes from a loving family, where she’s had plenty of opportunities to succeed, something her parents don’t want her to jeopardize.  She’s a bit of a tomboy, as she loves to play soccer and mix it up with the boys, and can more than hold her own when it comes to a fiery attitude, including plenty of trash talking.  But in accordance with custom, she wears a headscarf and dresses modestly, but she’s a modern woman that believes women can stand up for themselves, joining a radical group of women called the Sisters who discuss ways they can help fight repression, passing out flyers, posting YouTube videos depicting the horrors in Syria and Gaza, while also meeting a male radicalized friend that she likes named Abdel (Ilias Addab) in clandestine Skype sessions.  Developing a growing indifference towards her studies, she makes a bold move to drop out of school, secretly marry Abdel, and run away to Belgium to join a jihadist training camp, where the intimacy expressed while traveling together are among the best scenes in the film, showing a joyful and loving relationship.  But they barely avoid arrest when they leave, heading for Amman, Jordan, where they plan a life of religious activism.  While she is embraced by the women, where one takes her out to the refugee camps, where the children are starved for affection and anyone willing to spend time with them, she is totally ignored by the men, including her husband, spending long hours alone with absolutely nothing to do, where as an Islamic wife she is expected to clean the house and serve food, and do little else, as they have no use for a woman’s ideas.  The extent of the patriarchal society is not only demeaning, but cruel, as they demand total subservience, something that’s simply not in her DNA.  While she loves her husband, he positively stifles her spirit, where she’s not allowed to do anything without the husband’s permission, as the man makes all the decisions, while the subject of men’s discussions is off-limits to women.


What the film does is humanize the character of Layla, as she is searching within herself and in a surrounding society for a world without insults and recriminations, where people can lead their lives in peace without continual disruptions by police and angry citizens.  For most college-age kids, this is a fairly common dream, a belief in social justice, a hope that everyone can be treated fairly.  Instead what they discover is a daily reality of discrimination and profiling, which exists as much in black communities in America as Islamic neighborhoods in Europe.  The heavy-handed treatment, the overreactions by police that result in the shooting deaths of innocent young black men, or the continued harassment of Muslim men with beards, only leads to a seething discontent, a breeding ground for anger and radicalization, where the result is a lack of trust with existing authorities, which can lead to the extremist radicalization the film examines.  While this film asks as many questions as it answers, it attempts to fill the holes in a better understanding of what people are up against, where there are no easy decisions when facing the cruel realities of life.  One is reminded of Merzak Allouache’s Algerian film The Repentant (El Taaib) (2012) which is largely seen through a jihadist’s eyes, where despite honest efforts, they may never fully integrate back into society, as they’ve crossed too many lines.  While this is a well-meaning film, it only addresses the initial phase of radicalization, where she’s too intelligent and there are too many obstacles placed in this one woman’s path for her to become a true believer, becoming a public service corrective for someone who has swayed from the path of the civilized and was tempted by the jihadists, but ends up discovering their own extremism is too harsh.  That’s not the case with everyone, especially those coming from impoverished communities decimated by war, where there’s no hope anywhere to be found.  This is fertile territory for extremist recruits, as they have no other options.  So this is a somewhat watered down picture, but it’s helpful nonetheless, revealing how mistreatment builds discontent, that better police procedures that recognize the rights of minorities would be in society’s larger interests, as discriminatory behavior will come back to bite you.  That’s something both Europe and the United States seem to be ignoring, instead plunging ahead with more sophisticated use of surveillance and profiling techniques, where targeting racial groups will only lead to more ruthless police confrontations and create even more animosity.
Posted by Robert Kennedy at 12:01 AM