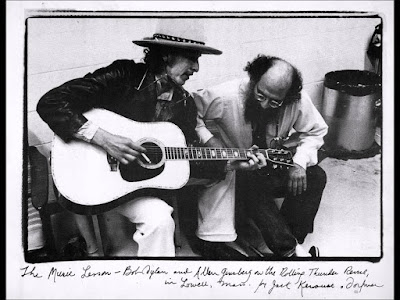 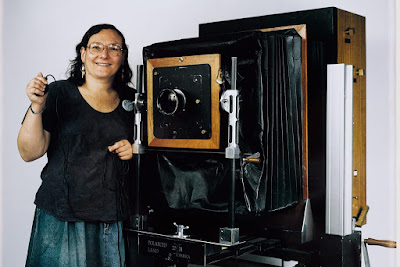 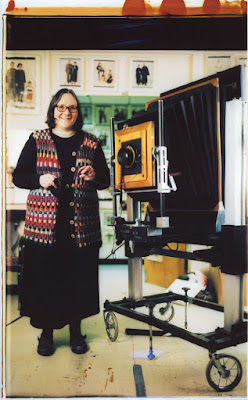 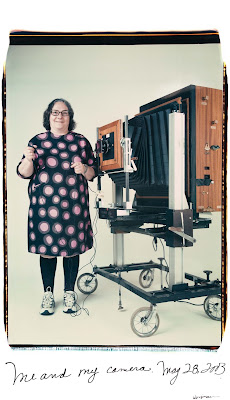 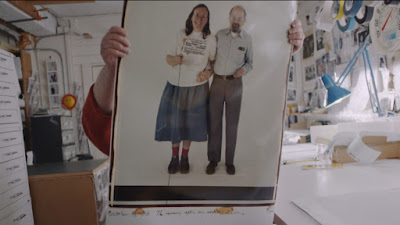 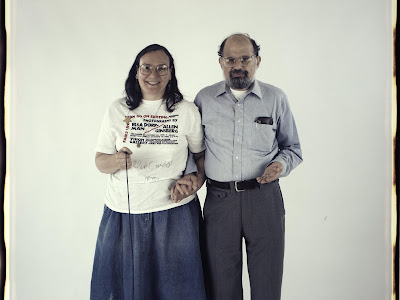 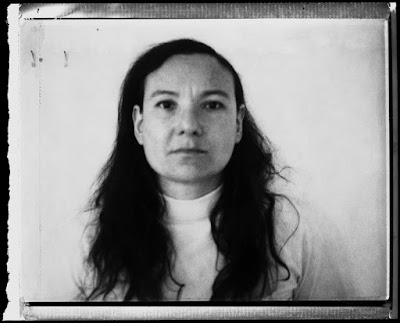 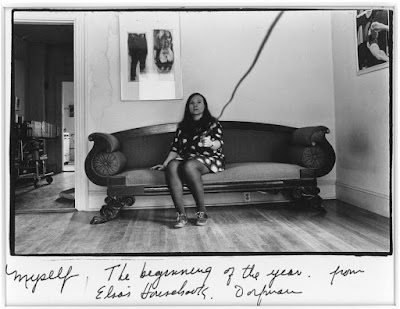 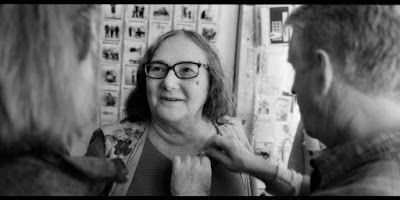 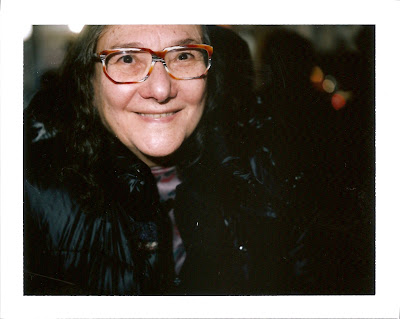 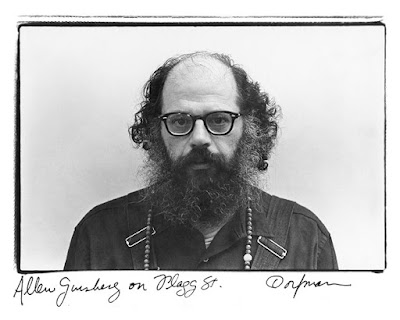 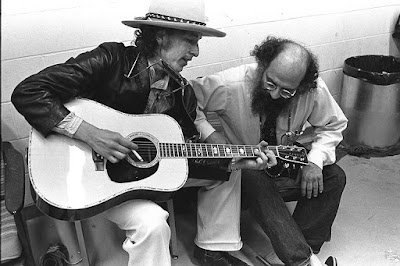 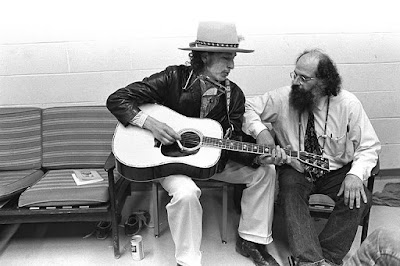 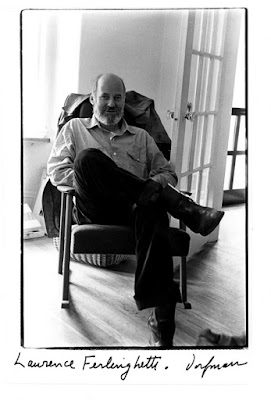 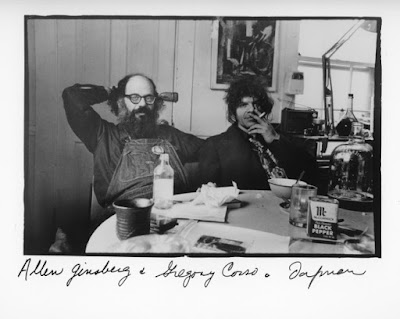 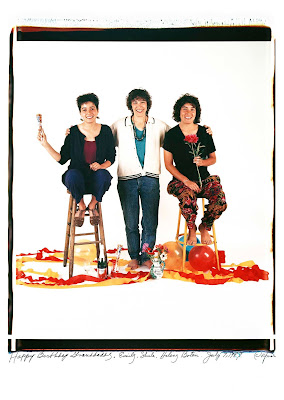 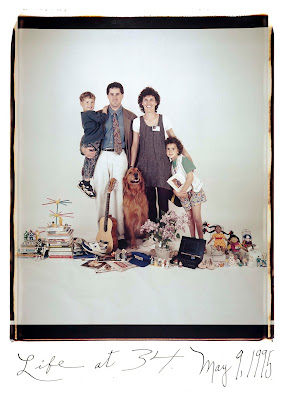 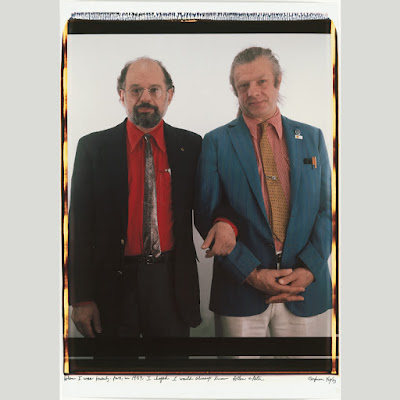 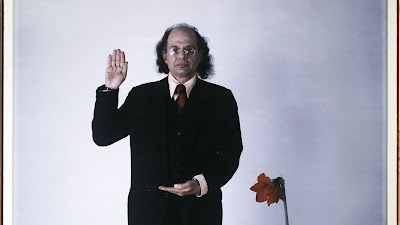 Errol Morris takes a break from his big important subjects, or his examination of the peculiarities of human behavior, and instead focuses on one of his best friends, Elsa Dorfman, a Cambridge, Massachusetts portrait photographer who has shot members of the director’s family 30 or 40 times, someone he has known for more than 25 years, while her husband Harvey Silverglate, a civil rights lawyer, is probably the director’s best friend, where they are godparents to Morris’s son Hamilton.  Be that as it may, this is a fascinating documentary, exploring the ramifications of photography through personalization, as Dorfman welcomes her subjects, often photographing them with clothes or objects that they adore, such as family pets, adding an element of positivism in her work.  “I’m really interested in the surfaces of people.  I am totally not interested in capturing their souls.  I’m only interested in how they seem.”  Often taking a series of pictures, such as year to year, including her own self-portraits, where there is no definitive truth that she captures in images, but something more fleeting, more transitory.  In 1959 she left home and moved to New York, working as a secretary at Grove Press in the heart of Greenwich Village, which paved the way fighting legal censorship battles by publishing D.H. Lawrence’s Lady Chatterly’s Lover, but also Henry Miller’s Tropic of Cancer, and the William S. Burroughs novel Naked Lunch.  They also published many of the Beat writers, including Jack Kerouac and Allen Ginsberg, where she met Ginsberg as she was in charge of the copy machine, claiming he copied everything he wrote.  Some of her most famous photographs are of Ginsberg, who loved to have his picture taken, as he was himself a photographer, who we have to thank for the recorded images of Jack Kerouac, Neal Cassidy, and William S. Burroughs that remain in our memories today, and had a propensity for being photographed naked, developing a lifelong friendship.  Dorfman didn’t pick up a camera until she was 28, returning home to Boston in the mid 70’s to pursue her master’s degree and teach school, arranging readings in Cambridge for many of the Beat poets, maintaining correspondence with them as they traveled the globe, where once a year, piled into a borrowed grocery store shopping cart, she sold snapshots of Allen Ginsberg and Bob Dylan in Harvard Square.

Dorfman started out taking black-and-white photographs in the 60’s and 70’s that additionally included such luminaries as Lawrence Ferlinghetti, Gregory Corso, Robert Lowell, W.H. Auden, Jorge Luis Borges, Robert Creeley, Anne Sexton, Andrea Dworkin, Audre Lorde, Joni Mitchell, Jonathan Richman, Julia Childs, and Anaïs Nin, once attending a Dylan concert where cameras were routinely confiscated, requiring the intervention of the singer himself for her to obtain a backstage pass along with her camera.  What distinguishes Dorfman’s work is her relationship with Polaroid beginning in 1980 when she was introduced to the Polaroid 20/24, one of only six 240-pound cameras that exist anywhere the world, producing instant prints in a large-sized format, where the clarity and detail are reportedly unsurpassed.  The first camera is located at the Film Society of Lincoln Center in New York, the second is in San Francisco, the third is in Prague, the fourth is in the Netherlands, the fifth is on exhibit in the Harvard Museum of Scientific Instruments, while Dorfman owns the 6th in Cambridge.  Polaroid invited only a select group of photographers to experiment with their cameras in exchange for donating photographs to the Polaroid Collection.  Dorfman took thousands of oversized color portraits, usually taking two shots, with the buyer choosing which one they want, where she has kept all the rejected photos that she calls “The B-Side,” a riff on single music releases.  As she carefully pieces her way through her vast archives of photographs, reading the captions that she has written on every one, something to distinguish each from the next, she wonders why they didn’t pick some of the rejects, as she’s certain some are vastly superior to the ones chosen, offering a running commentary about her life along the way, speaking tenderly about the importance of friendships, as her art is a treasure-trove of memories.  Her assessment of her own work is brutally honest, calling a lot of it junk that she doesn’t have the nerve to throw out, as these are the products of what will one day be viewed as a forgotten era, as in 2008 Polaroid went out of business, selling to a company that closed the factory and failed to preserve any of the historic machinery that probably belongs in a scientific museum.  Much of this has the feel of Herzog’s Lo and Behold, Reveries of the Connected World (2016), especially how enamored the science community is about the original machine that sent the very first Internet message, as if this was the dawn of an era.  Dorfman is extremely attached to the largesse of her craft, but has been forced to retire at the age of 79 now that they no longer make any film for her prized camera and she has used the last of her stockpile.  There’s also the question of faded photographs, claiming some have lost a bit of their vibrancy over time, while also declaring a delight in faded things, as their value may only increase over time.

There is a surprising degree of warmth in this film, especially the friendship between Morris and his subject and the thread of Ginsberg, with Dorfman describing him as an “omnivore,” as he devoured every subject with an extraordinary curiosity.  As they study a photograph of Ginsberg in a suit juxtaposed against him in the nude, a practice that was initiated not by the artist but by Ginsberg himself, she sadly acknowledges she believes that’s the suit they buried him in.  Morris plays Dorfman’s recorded phone message from Ginsberg in the hospital informing her of the seriousness of his illness, requesting they call him back, one would never associate Ginsberg with using the expression “Okey-dokey,” though there is an ominous pause as the effects of his death sink in, where Dorfman is obviously extremely moved by the moment, showing unguarded emotions, where she is perhaps caught off guard by Morris, who asks “Does it bring Allen back?”  “Of course,” she replies, as photographs embody the subject, offering a poetic truth about that moment in time, thinking “Maybe that’s when photographs have the ultimate meaning – when the person dies,” where there is a “fugitive beauty” in the fact that the prints themselves are also fading, where all things are perishable.  All the more reason to cherish their memories, as photographs may help extend the power of those reflections.  Dorfman treats each subject with a fresh take, and a kind of child-like innocence, taking great pleasure in making them feel comfortable, where she can find them in happy moments.  She never delves into the mystical to find meaning behind her photographs, but is instead fascinated by what the camera can obtain, connecting to the surfaces, including the less than perfect moments, as even they have a tendency to humanize the subjects and make them perhaps even more recognizable to one another.  Dorfman values existing realities, flaws and all, over some fantasized perfection that doesn’t really exist.  Dorfman claims even Polaroid never really recognized the value in her work, placing her near the bottom of the barrel of their selected artists, much like she endured being under-appreciated during her stint in New York working at Grove Press, yet somehow, modestly maintaining her own moral integrity, she survived intact with a body of work that will only appreciate over time.  Knowing this is what gives her comfort and assurance, as she’s always had a belief in herself, even though she’s never been showcased in the art galleries.  It’s just that now others may have a chance to discover her work on their own, knowing that the technology is dead, give it new life by reassessing its importance.  By getting personal with Dorfman, Morris gets profound by allowing these poster-sized photographs to come to life and speak for themselves.  According to Morris, “Elsa has always said that that these pictures become more and more valuable over time, and she’s absolutely right.  These pictures are some of my most valued possessions, pictures of my mother and stepfather who are dead.  There is something different about these 20×24 Polaroids than a normal snapshot, it’s almost as if the person is really there, standing next to you.  While you can take photographs on hundreds of different media, there is something about this process that was magical and unique.”
Posted by Robert Kennedy at 3:37 AM