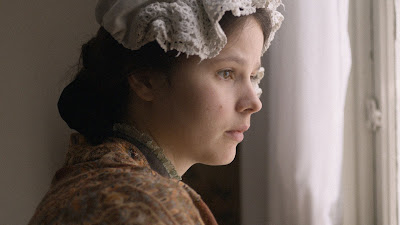 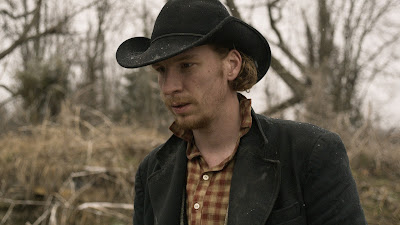 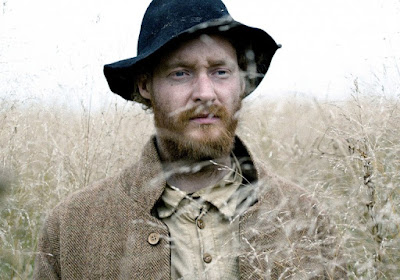 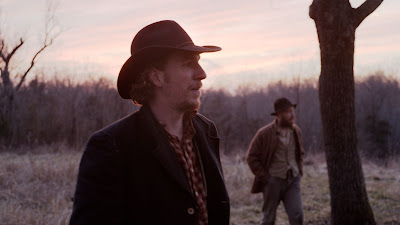 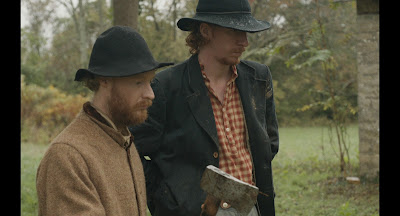 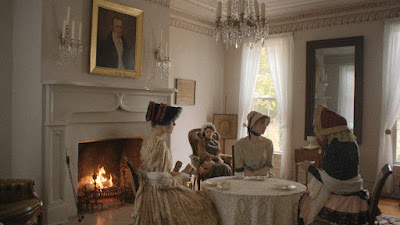 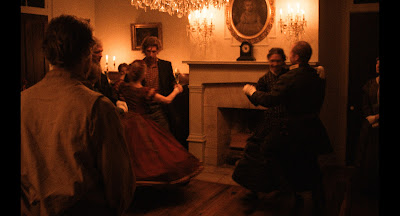 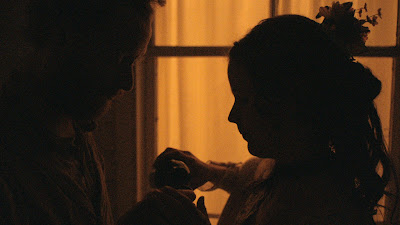 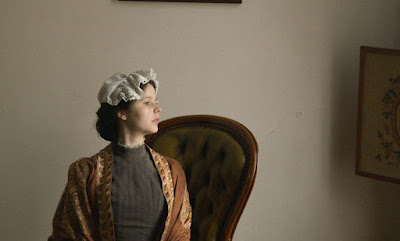 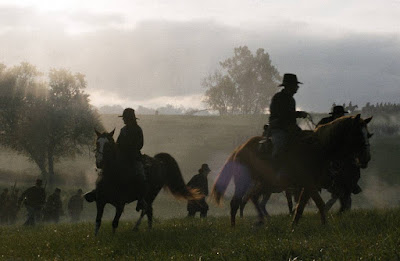 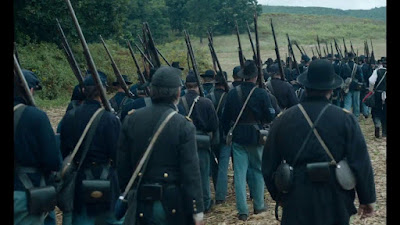 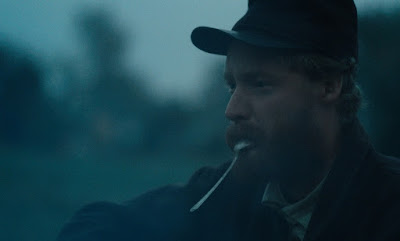 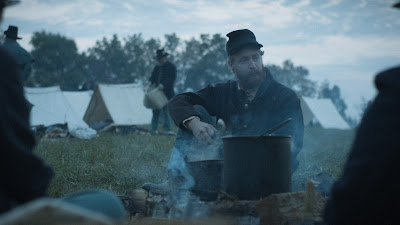 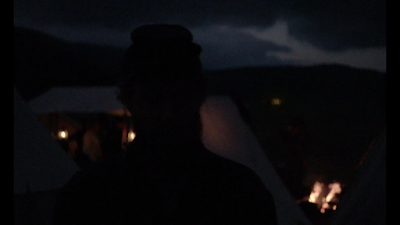 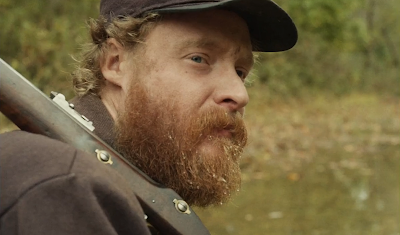 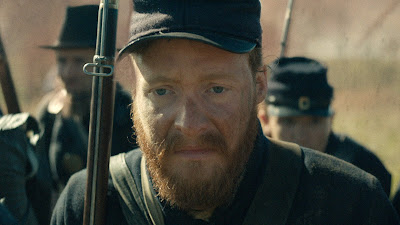 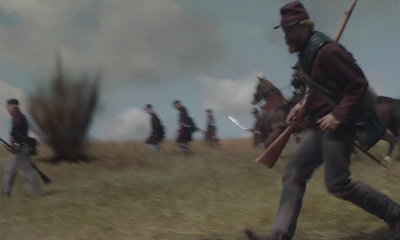 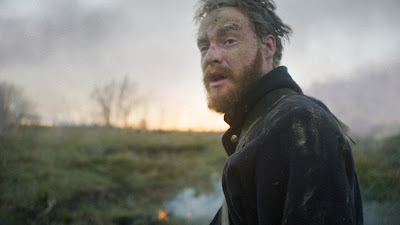 A minimalist film tangentially set during the Civil War, while remaining mostly on the periphery, using a somewhat abstract narrative technique, loosely resembling the more highly acclaimed film set during the Holocaust by László Nemes, Son of Saul (Saul Fia)  (2015), where the artistic stylization actually tells the story.  The rural setting is Smalls Corner, Kentucky in November 1861, where we meet two knuckleheads for brothers, Francis (David Maloney) and Henry (Tim Morton) Mellon, both living inside a claustrophobic one-roomed shack with no windows, apparently on the outskirts of town, where they are tolerated by the rest of society.  Owners of a hundred acres of inherited land that has been grown over by weeds and tall grass, it currently yields no crops and is on the verge of ruin, where Francis is interested in getting what he can for it, while Henry is of the opinion they should work the land.  These guys don’t really discuss the details with each other, but simply act impulsively on their own, often to their own detriment, especially Francis, the older and more reckless of the two, whose aggressive pranks tend to be mean-spirited, usually seen picking on his younger brother for sport.  In this way they are viewed as a couple of numbskulls without any real education between them, but they are part of the landscape, even invited, occasionally, to social functions by the one family of means, the Smalls, owners of the general store in town, and one of the few families that can afford slaves for servants, though it’s clearly evident they don’t trust them.  Nonetheless, the film establishes an easygoing rhythm of life in this small rural community, with the Mellon brothers striving for significance.  At an outdoor festivity organized by the Smalls, Francis doesn’t so much ask Betsy Smalls, Rachel Korine, wife of director Harmony Korine, previously seen in Spring Breakers (2012), to dance, seemingly the only available unattached girl in town, but grabs her instead in a drunken state and starts prancing around like a wild man, eventually losing his balance and falling awkwardly into a mud puddle, embarrassing himself completely.  It’s unclear whether he did this on his own or if Betsy might have shoved him, though he bears the brunt of the humiliation.  When Henry walks into town the next day, just to say hello to Betsy in her father’s store, he may have been trying to save face for his dimwit brother.

Henry has his own embarrassing moments, injuring his hand while roughhousing with Francis, where the brothers are forced to interrupt a lavish party at the Smalls residence in search of a doctor, who pulls Henry aside to mend his wound, while the uninvited Francis makes himself at home at the party.  Afterwards, Henry steps outside and happens upon Rachel, engaging in a kind of absurd Monty Python sketch as both aimlessly discuss the recent weather, a conversation that goes absolutely nowhere until she offers him a drink.  As if an invitation for more, Henry impulsively kisses her on the lips, drawing tears of sorrow from the young girl, as he’s obviously spoiled her romanticized vision of a “first” kiss.  It’s literally weeks afterwards that Francis receives a visit from Rachel, delivering a letter written by his brother Henry, reporting he has run off and joined the Union army, providing a place where he receives regular meals.  As both brothers are illiterate, someone else has to help them read and write all subsequent letters, which play prominently into the rhythm of the film, much like they did in the infamous Ken Burns The Civil War (1990) saga, where the bleak minimalism of this film acts as a crude counterpart to the grace and poetry obtained by Burns.  Not sure if this is intentional, but it’s hard not to think this pales in comparison, which may be a humorous riff by the director.  Made for just half a million dollars, the film has excellent production values, where the costumes in particular have the look of authenticity, including an armed combat unit.  The haphazard look of men bivouacked in the middle of nowhere creates a sense of unbalance, each one a long way from home, where there’s a sense of alienation felt throughout.  So early in the war, there’s also a belief that it will all be over soon, as the sense of utter devastation is yet to come.  One of the better scenes takes place in the quiet of a narrow river, where Johnny Reb and Billy Yank are on opposite shores, yet they have the decency to trade what they have, coffee for tobacco, where there’s an innate feeling that they are all on the same side of humanity separated by arbitrary boundaries.

The film never explores the moral guidelines or political divisiveness of the war, yet the ramifications are explored, as there is talk of rebel soldiers landing in someone’s kitchen one morning, where feeding them breakfast was the only right and natural thing to do.  When Union soldiers, on the other hand, are seen out the window of the Smalls residence arriving in droves, it presents an altogether different feeling—one of an occupying force.  It’s through a letter that we learn the soldiers have commandeered the Smalls home for themselves, where we can only imagine the consequences.  Separated by geography and distance, Henry suddenly finds himself in the middle of a battle scene, which is altogether different from the stress-free marching and preparation time, as here they are walking into the throes of death, literally marching into firing range as both sides unleash volleys of bullets.  It feels a bit like Revolutionary War strategy, as armies are marched out into open battlefields where they are completely exposed, only to become sitting ducks.  It’s interesting that some of this was shot during contemporary Civil War reenactments, as history buffs from all over the country regularly meet at historical sites dressed in authentic military uniforms to restage historical battle scenes.  While this presents a problem, as some are obviously too old or overweight, soldiers at the time were likely to be emaciated teenagers, which is not exactly the demographic of the reenactors.  So the director had to target younger guys, placing his actors in their midst, creating an authentic look.  In order to accomplish this, the director, through cinematographer Brett Jutkiewicz, was influenced by the murky style of Andrea Arnold’s Wuthering Heights (Arnold) (2011), where the landscape is always engulfed in low-lying fog.  Additionally, much of this film is also shot indoors at night illuminated by natural candlelight, so it is often hard to see through the darkened shadows.  With no musical score, or even synchronized sound on the battlefield, this altered sense plays into the experience of the film, which feels multi-layered, given an almost experimental feel, where the shifting moods guide the viewer through the passage of time, offering multiple settings, with chapter headings reminding us of the new locales.  With a minimal storyline, much of it left ambiguous by the end, this only enhances the significance of the heightened mood and atmosphere established throughout.  It’s a small indie film, much of it barely there, and while it happens to focus upon two estranged brothers, it’s surprisingly Rachel Korine who has the strongest impact.
Posted by Robert Kennedy at 12:03 AM