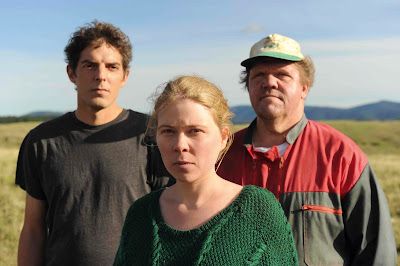 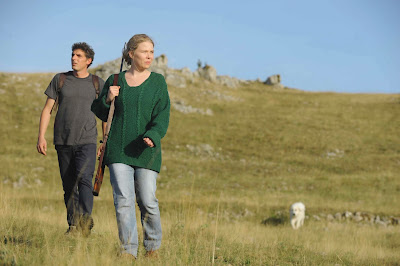 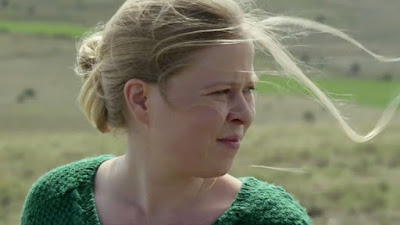 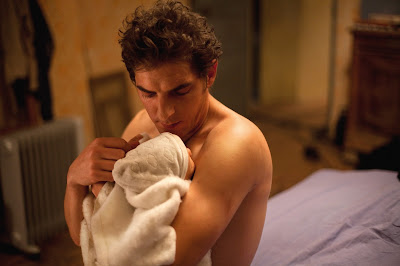 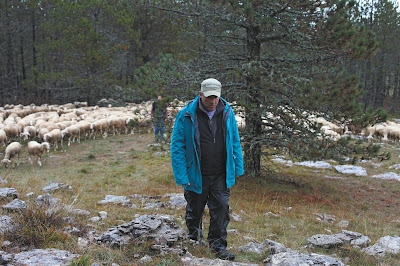 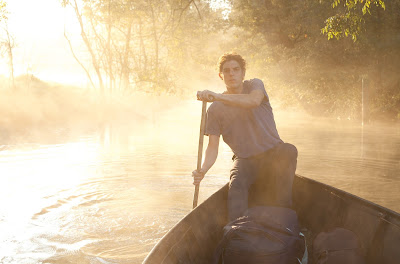 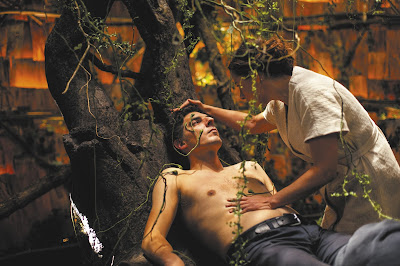 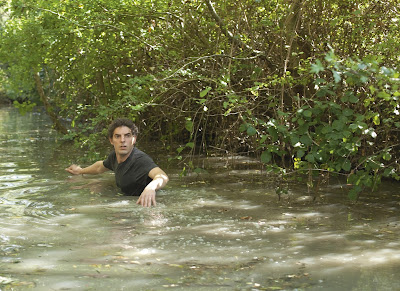 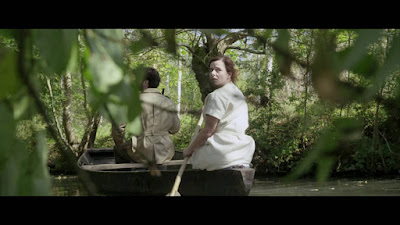 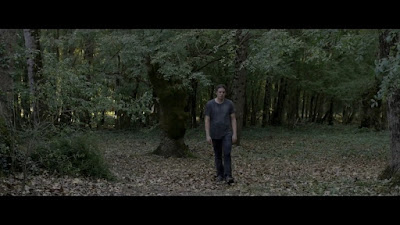 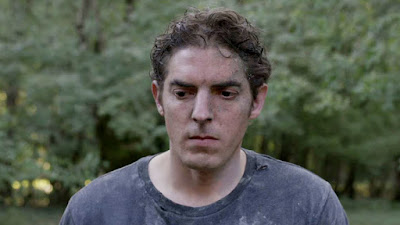 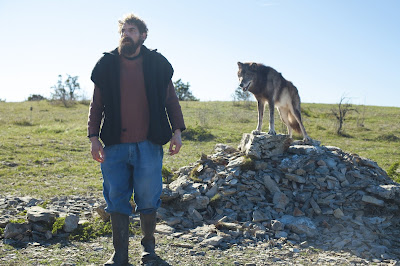 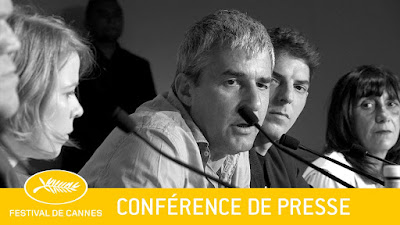 An erratic, hilariously funny, yet extremely bizarre film that goes overboard on sexual indulgence mixed with comic absurdity, that was apparently inspired by news stories of wolves returning to France, where Guiraudie has fashioned himself something of a Charlie Kaufman screenplay featuring a procrastinating screenwriter driving his Renault around the rural country roads of France suffering from writer’s block.  That makes this a road movie, of sorts, though there are plenty of stops along the way, veering into mythological fantasy sequences and an exploration of the surreal.  While the story itself couldn’t be more offbeat and wacky, it retains the same cool precision of the director’s earlier film, Stranger By the Lake (L'inconnu du lac) (2013), using a surgical yet outrageous style to convey an anxiety-ridden, inner turmoil of eccentric characters who are mostly seen in deadpan expressions.  The lead character Léo (Damien Bonnard) is an everyman kind of guy with no distinct personality, known for having recurring telephone conversations with his agent about a long overdue script that he claims is nearly completed, though he hasn’t written a word, that invariably end with Léo asking, “Could you wire me 3000 euros?”  As he travels the roadways, he encounters a young teenage kid on the side of the road, Yoan (Basile Meilleurat), doubling back to ask him if he’d like to be in a film, adding a homoerotic subtext, telling him, “You don’t see too many faces like yours around here,” but is resoundingly rejected.  Not taking no for an answer, it’s clear Léo has something else in mind, but the kid is not interested, so instead he ends up hiking through an open plateau of sheep grazing territory, where he encounters a young shepherdess Marie (Linda Hair), who keeps a rifle by her side on the lookout for wolves.  Léo is ecstatic about the possibility of seeing a wolf, where he thought it might only be rumors.  Marie’s view is vehemently different, claiming they are a pest to the herd, a clear and present danger for farmers in the region.  While she wants to kill them all, he values every life.  Next thing you know, the two are on the ground groping each other and having a frenzied sexual encounter.  Inviting him to stay, their sexual tryst continues under the watchful eyes of her two children along with her haggard-looking father Jean-Louis (Raphaël Thiéry), who looks like a punch drunk boxer well past his prime who’s taken a few too many blows to the head, leaving him constantly looking dazed and confused, like a live version of the ogre Shrek, or something out of a Bruno Dumont movie.

Léo appears to be something of a drifter, a perpetual wanderer, who moves back and forth between the city and the outlying area, seen in a tiny urban apartment slouched over a typewriter, making no progress whatsoever on his screenplay, yet he always returns back to Marie, helping to look after her unruly kids.  Adding to the weirdness, Guiraudie loves to show the nude female anatomy of Marie in a close-up view of her genitalia along with her abdomen and ample breasts while lying in bed, reminiscent of Gustave Courbet’s famous painting L’Origine du monde (11,000 × 9,113 pixels), quickly cutting to a graphically raw, live birth delivery, complete with all the vaginal fluids intact in a scene that may be difficult to forget, that may have some in the audience reeling in shocked surprise.  Cleaned up and wrapped in a blanket, Marie shows little interest in holding her baby, a duty that goes to Léo instead.  Next thing you know, Léo, assuming Marie’s role, is out in the fields guarding the sheep, where off in the distance he can see Marie and her two kids scampering away, abandoning Léo and the baby, apparently suffering from postpartum depression, but also trapped by the claustrophobic existence with her father, where she is clearly unhappy.  When Jean-Louis incredibly uses the crying baby as bait to attract the wolves, placed out in the middle of an open field while he stands nearby with a rifle, Léo, a born wanderer, has little choice except to hit the road with a baby in his arms.  When he returns looking for Yoan, what he discovers appears to be an empty house with Pink Floyd music on full blast, though we learn he’s ripped off the old man he takes care of, Marcel (Christian Bouillette), a cantankerous, foul-mouthed old man who spews racist and homophobic insults, calling the kid a thief and an ungrateful “little faggot” who stole all his savings, among other things, suggesting he may have run off to Australia.  Crushed to be left all alone, Léo befriends him and tries to help out, but he’s still got that baby.  In perhaps the strangest sequence, Léo runs off to an enchanted forest to visit a new age psychotherapist in a white coat using the latest natural methods, Doctor Mirande (Laure Calamy), where she’s able to read his anxieties through the placement of plants on his body, using them like an EKG electrocardiogram chest exam.  As we see him row a canoe upstream through a mythical forest, baby in tow, he hears the calling of his agent (Sébastien Novac) looking for his script.  Like a deeply troubling dream, he panics and hides in the lush foliage, terrified that he might be discovered, only to surface sometime later while the doctor and agent are calmly having afternoon tea.

Léo can’t play the scriptwriting card anymore, leaving him destitute and without income, yet still clinging to this baby, who has a kind of Bressonian Au Hasard Balthazar (1966) effect, as hardships seem to follow the baby carrier, robbed and stripped naked by a group of homeless men, who attack him like a pack of wolves, leaving him to wander the hinterlands completely naked.  With no place else to go, he returns to Marcel, grumpier than ever as he feels abandoned and so close to death, leading to one of the more intently sexualized visions of euthanasia with Léo more than happy to oblige, erect penis and all, set to the rollicking score of Pink Floyd.  It’s a mindblowing moment, the kind you won’t see anywhere else, made even more absurd when he’s back on the run afterwards, yet shocked to discover a tabloid picture of himself on the front page with headlines screaming “Man sodomizes, then euthanizes, elderly man in front of his baby.”  Now thoroughly disgraced in the eyes of the public, his humiliation and fall from grace is not complete until social services comes to take his baby away from him, returning the infant back to the arms of the mother that never wanted him in the first place (now with a familiar new boyfriend), as if that provides some needed societal equilibrium.  Retreating back to the farm, where sexual advances by Jean-Louis were previously rebuffed (though that itch is currently being scratched by someone else), Léo sleeps out in the barn, never parting from the flock of sheep he vows to protect.  “Wolves Kill Here” is a hand-made sign from Jean-Louis, a reminder of a terrible incident where several of his sheep were slaughtered with no one watching over them, which is etched indelibly in Léo’s mind.  In the beginning he expressed a kind of idealistic admiration for wolves, though now he’s come full circle, realizing they are a predator threatening his sheep.  This is a film that boldly creates plenty of dead ends and misdirection, cryptically heading off-road into the mystic, as Léo ends up as a kind of Christ-like mythological wayfarer, always showing more compassion for others than for himself, the kind of person that would never cause harm to anybody else, yet absorbs the constant wrath of others, mirroring society’s pain and discontent.  The shepherding motif remains perplexing throughout, the idea of protecting the lambs from the slaughter, yet equally curious is this idea that the wolf is both within and without, depicting a sexual beast of unsuppressed desire that lies within, contrasted against this surreal view of a dark Buñuelian universe with wolves on the loose ready to devour their pray at any moment, suggesting perhaps that we must learn to protect ourselves against our own predatory instincts.
Posted by Robert Kennedy at 12:03 AM