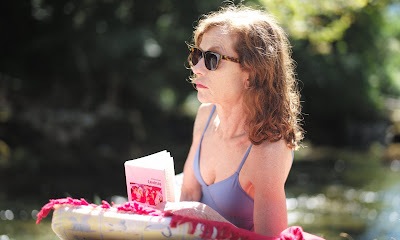 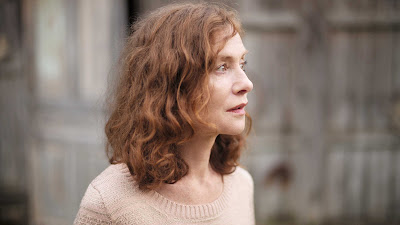 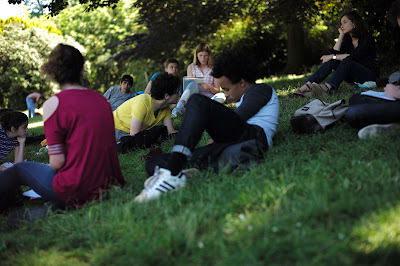 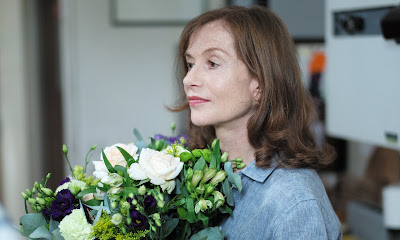 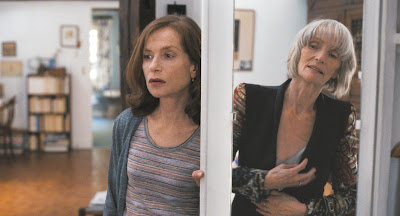 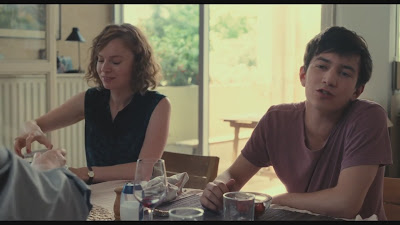 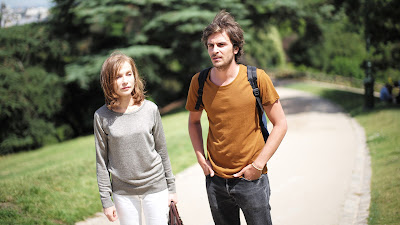 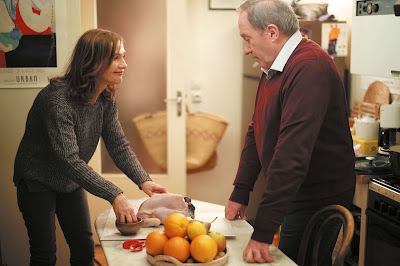 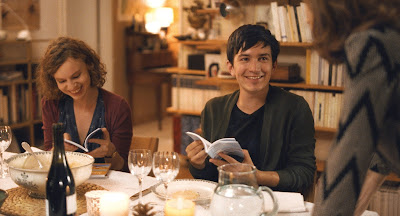 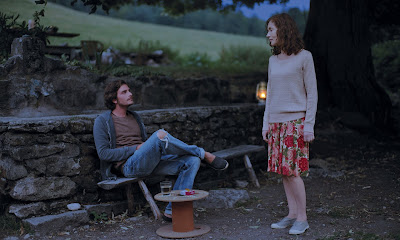 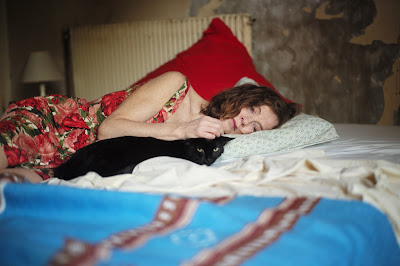 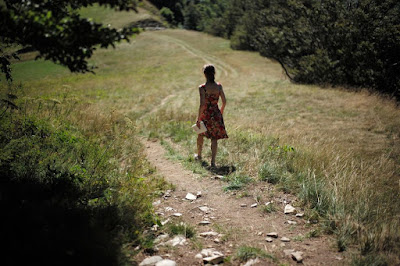 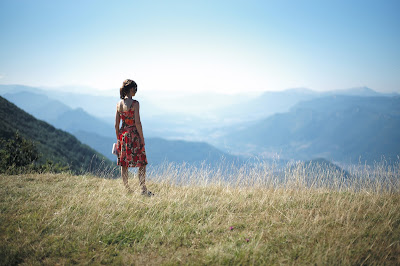 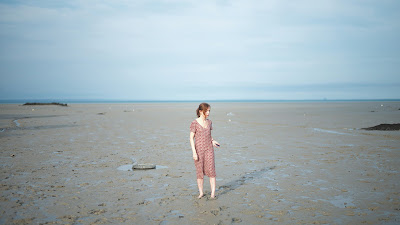 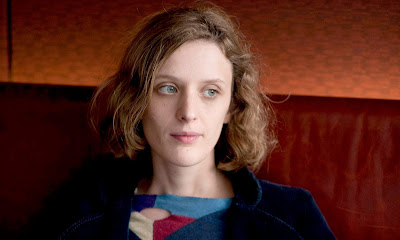 Anyway, after 40 women are fit for the trash.
—Nathalie (Isabelle Huppert)

Despite winning a Silver Bear Best Director award at Berlin from a jury headed by Meryl Streep, this film may be the lone disappointment in the short career of Mia Hansen-Løve, who has built a career making meticulous, observational films that become intimate character studies, where part of the joy of her films is veering into the unexpected, where by the end of the journey, you’ve entered some sort of forbidden or unanticipated territory that would have been impossible to predict from the outset, where in her last two films, for instance, Goodbye First Love (Un Amour de Jeunesse) (2011) and Eden (2014), the primary characters have no way of anticipating how their lives would turn out, as it’s nothing close to what they originally dreamed or imagined.  While that’s partly true here, what’s missing is any hint of the unexpected, as this utterly conventional film couldn’t be more predictable, and while it’s a contemplative portrait of womanhood, where a husband’s mid-life crisis leaves a woman’s marriage on the rocks, finding herself suddenly isolated and alone, there’s never any doubt that the woman in question would land on her feet.  And while she thought she would remain married forever, she’s always been a strong independent thinker, capable of making her own life decisions, exemplified by the fierce independence of actress Isabelle Huppert, whose fearlessness in taking on roles boggles the imagination.  Is there a more commanding screen presence than Isabelle Huppert?  So is it any wonder that she survives so convincingly, with her wounded pride and dignity in tact?  It’s never really an issue.  As a result, there isn’t an ounce of suspense to this film, where instead it meanders into muddled territory, name-dropping books and philosophers without any intellectual curiosity or exploration, where they simply become part of the overall narrative.   What this film lacks is any sense of risk or danger, even in the student radicals portrayed, as they all lead a life of comfort, where their lifestyle, ability to earn a living, or freedom to express themselves is never threatened.  What all the characters in the film have in common is a white middle class, overprotected life of privilege and comfort, where they have every advantage, as all avenues of life are open to them, which they are free to explore.  Where’s the drama in this film?  Where’s the challenge to the viewer?  If it’s about life throwing us a curve, where in midlife we have to alter the direction of our lives, well, honestly, with divorce rates being so high, isn’t that fairly common, and isn’t it worse for those on the economic fringe, as they have so much more to lose?  What about all the people that lost their jobs and their homes in recent years from the worldwide economic crisis, or the flood of refugees leaving their former lives behind?  No one in this film gives a whit about any of them, as they are safely protected in their middle class bubble, where they don’t even have to think about such things.

Essentially a one-woman show, a showcase of a single character, the film concerns a middle-aged Parisian high school philosophy teacher Nathalie Chazeau (Isabelle Huppert), appearing dedicated and comfortable in her role, where her philosophy textbook has been regarded as the standard in schools throughout France for years.  But the film opens off the coast of Brittany where Nathalie, her husband Heinz (André Marcon) who is also a philosophy professor at the same school, and their two younger children are visiting the grave of Chateaubriand, an author who is considered the founder of Romanticism in French literature, which by itself is a mild stab at humor, as there is little fire or romance on display in their relationship which has grown soft and complacent through the years.  The film jumps ahead a few years to Paris in 2010, the Sarkozy era of pension reform strikes that affected universities across France, where we hear President Sarkozy give lip service to the problem in an attempt to quell a rising tide of resentment, “I am aware that people suffer.”  While students are protesting in the streets asking her to join their cause, which will actually benefit her, Nathalie strides right through the picket lines, undaunted by their spirit, sheltering the students in her class as well, indignantly shouting “Your talk of ‘68 is pathetic!”  Well, the idea of a student needing the help of a teacher to get through the picket lines is also fairly incomprehensible, as if students themselves have no free will.  This is one of many strange aspects to this film.  While Nathalie is an inspiring teacher that her students enthusiastically respect, she exhibits little passion in her work, as if it’s all been said before to generations earlier, where she’s simply reworking the same thoughts and phrases into the curriculum, where among her favorites is Jean-Jacques Rousseau, one of the most influential thinkers during the Enlightenment in 18th century Europe, whose political philosophy led to the French revolution and remains at the core of French values today.  As if mirroring the current social unrest, she offers a quote from his seminal work The Social Contract (1762), suggesting “If we take the term in the strict sense, there never has been a real democracy, and there never will be.  It is against the natural order for the many to govern and the few to be governed. […] Were there a people of gods, their government would be democratic.  So perfect a government is not for men.”  Thought and reality merge from the same source for Nathalie, where if a question arises, she picks up a book, as evidenced by the overflowing bookshelf in her living room filled with philosophy books.  Totally dedicated to challenging her students, she sees her role as teaching young minds to think for themselves, to join a collective of similarly educated adults to form a more perfect society, where according to Rousseau, “Liberty is not inherent in any form of government, it is in the heart of the free man.”

However, things start pecking away at her more perfect world, throwing her life into turmoil, none more troubling than her aging mother, Édith Scob, always a delight, from Franju’s horror classic EYES WITHOUT A FACE (1960), who neurotically buys expensive clothes in the wrong size and continually suffers panic attacks at all hours of the day and night, calling her daughter, calling for an ambulance, all signs that she’s unable to care for herself and needs a more professional setting with medical staff on hand.  In another blow, her publisher wants to redesign her philosophy textbook, with marketers discussing a more brightly accommodating color scheme to make it more inviting, eventually deciding to dump it altogether.  But the coup de grâce is the announcement from her philandering husband that he’s in love with someone else and will be moving out of the house, leaving her, effectively, all on her own.  The full effects of this dramatic earth shift is beautifully rendered by the profound sadness of Schubert Lieder, “Auf Dem Wasser Zu Singen (To Sing On Water),” Dietrich Fischer-Dieskau; "Auf dem Wasser zu singen"; Franz Schubert YouTube (3:28), easily the most sublime moment of the film.

Ah, with dewy wings
On the rocking waves, time escapes from me
Tomorrow with shimmering wings
Like yesterday and today may time again escape from me,
Until I on towering, radiant wings
Myself escape from changing time.

The film goes into a freefall of exploratory acts, placing her mother in an assisted living facility while assuming the care of her aging black cat Pandora (which she tries to pawn off on others), while also temporarily joining an overly smug, former classroom student Fabien (Roman Kolinka) who has joined an anarchist collective living in a rural farm commune, interestingly playing the 1944 Woody Guthrie labor song Ship In The Sky - Woody Guthrie - YouTube (2:41) on the car stereo as they approach the mountain retreat, which she enthusiastically embraces, but he’s already sick of it, claiming it’s the only CD that works.  Once they arrive, Pandora immediately gets lost in the wild, with Nathalie amusingly more concerned about the cat than anything else, but Fabien assures her the cat can take care of itself, that survival instincts will kick in.  As if on cue, the cat proudly arrives with a mouse the next morning, demonstrating complete assurance in this new environment.  While an obvious metaphor for her own life, this entire segment feels like a step back in time, feeling overly pretentious, something never associated with a Mia Hansen-Løve film before, including the use of Donovan’s overly repetitive mantra Deep Peace - YouTube (3:11), spouting meaningless platitudes like “Denying reality won’t lead to a new way of thinking,” with books by Slavoj Žižek (Slavoj Žižek: 'Humanity is OK, but 99% of people are boring idiots ...) next to The Unabomber Manifesto in their library, suggesting all points of view are viable options as they attempt to align radical thought with action, yet Nathalie has absolutely no connection to any of them, so other than the cat sequence, much of this feels like a complete waste of time.  Without resorting to dramatics, it’s clear Nathalie isn’t going to suffer an emotional meltdown, but relies upon the solace and security of books, whose ideas have always held a major impact in her life.  There is an earlier tearful scene of her on the train, at a point when her life feels totally out of control, but when she sees her ex-husband with his new girlfriend out the window on the street, she bursts out with laughter, immediately restoring the balance.  This, in essence, is the film, a bourgeois midlife crisis showing equal parts vulnerability and resilience, becoming a feminist rebuke to fatalism.  The director has indicated the film grew out of her own experience with her parents, their ensuing separation, while observing her mother’s subsequent struggle to regain her emotional equilibrium.  In Nathalie’s case, her core foundation of philosophy and her love to inspire new generations of students helps alleviate any emotional crisis, as she’s perfectly comfortable relying on herself.  She does get a kick out of seeing her ex-husband suffer, conveniently leaving him out of family gatherings with their children, which they will always share, but she makes certain they don’t share them together.  Passing the torch to her newborn grandchild, seen crying uncontrollably, she comforts the child to the familiar refrains of “Unchained Melody,” Unchained Melody - The Fleetwoods - YouTube (2:47), which tenderly plays out over the end credits.
Posted by Robert Kennedy at 12:00 AM