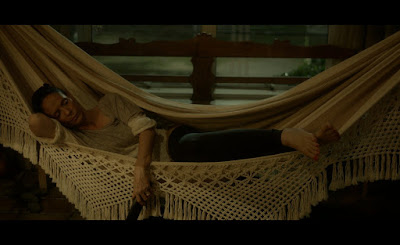 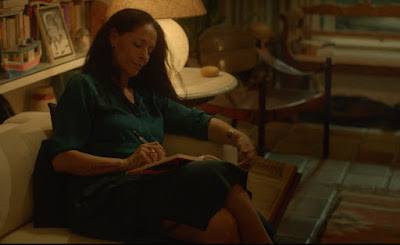 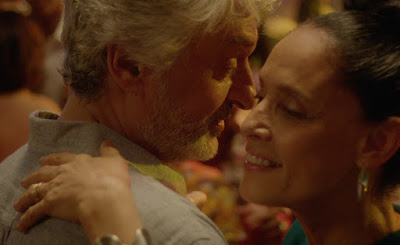 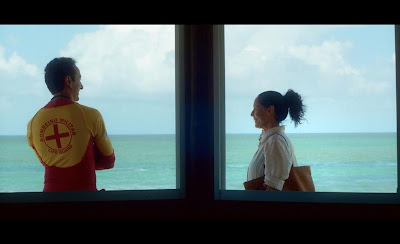 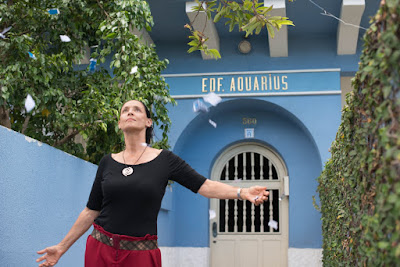 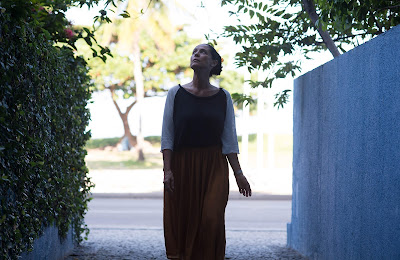 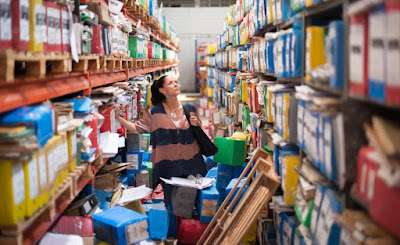 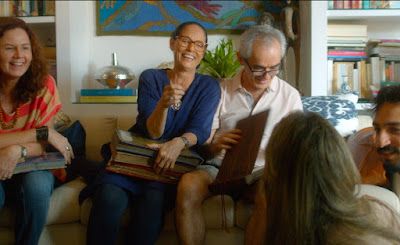 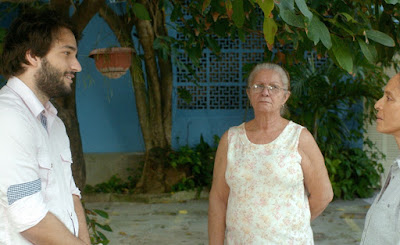 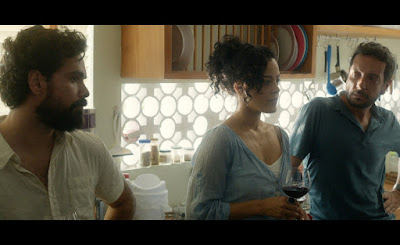 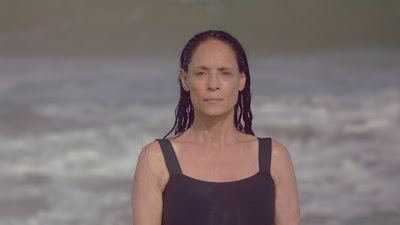 A long, infuriating, and seemingly epic portrait of Brazilian strife, as seen through the eyes of an aging, iconic actress, the brilliant Sônia Braga, now age 66, who was the epitome of Brazilian films during the 70’s, with films like DONA FLOR AND HER TWO HUSBANDS (1976) and I LOVE YOU (Eu Ye Amo) (1981), where she seemed to rejoice in a liberated spirit that allowed her to display a healthy attitude towards nudity and sex (again here in her 60’s!), where without a doubt, she was always the most interesting person in the room.  Retaining that same rejuvenated spirit, she remains a life force, inhabiting the central character who dominates this film, where she is viewed with such love and adoration by her family and friends, not to mention the filmmaker, that she becomes synonymous with THE GODFATHER (1972), not from any ruthless tactics or unscrupulous business practices, but the way people come to worship her, as do many in the viewing audience as well.  While she gives a blistering performance, the film itself does not live up to its potential, remaining flat and indistinguished, with a story that never really goes anywhere, leaving an exasperated audience that wants so much more.  Outside of the lead, the rest are one-dimensional characters who are not really explored, where the interest in the excessively long journey dissipates over time, becoming more of a social portrait than a film, where the power of real estate developers target a lone hold-out in a building that is otherwise empty, who refuses to move, as her storied life took place in this building, yet the powers that be wish to demolish it in order to reconstruct something new, something very profitable.  In this case it’s not pitting the rich against the poor, but the super rich against an eccentric older lady who happens to be wealthy herself, who could easily move elsewhere but chooses to remain where she is, feeling more like an exploration of her personal memoirs.  The film has a storied past coinciding with its release at Cannes, as the director and cast denounced the coup d’état against the Brazilian government where Dilma Rousseff, the democratically elected president, was being impeached, where there is good reason to believe this was to stop a corruption investigation into the business practices of the country’s right wing faction, the very same who were initiating the impeachment and who would assume power afterwards.  The conflict of interest is staggering, yet there it is, that’s Brazilian politics.

Dilma Rousseff's impeachment was led by the white, wealthy men who ...    Manuel Barcia from The Independent, May 15, 2016

New Political Earthquake in Brazil: Is It Now Time for Media Outlets to ...   Glenn Greenwald from The Intercept, May 23, 2016

Additionally, Brazilian film critic Marcos Petrucelli, who was part of the special selection committee choosing Brazil's foreign-language submission for the 2017 Academy Awards, made negatively biased remarks on social media about director Mendonça Filho’s politics, which was viewed as an attempt to undermine the film’s potential in representing Brazil at the Oscars.  Many directors subsequently withdrew their films for nomination in protest, claiming the fairness of the selection process was violated, so a little unseen film Little Secret (2016) was chosen as the country’s submission, where its chances are basically null and void.  To be fair, however, this film is really not very good, despite its laudable intentions and a towering central performance by Braga, arguably the best in her career.  Part of the reason is that it seems the film was written exclusively with her in mind as a showcase for her wondrous talents, but they failed to create an equally compelling drama, as it’s filled with a supporting cast that all seem to be playing to this one central character, as if the moon and the stars revolve around her.  In the end it’s all too much, where there’s not enough of a developed story surrounding her, where it ends up being a one-note film, one woman pitted against sinister corporate interests wishing to make a quick buck at her expense, where the film tries in vain to provide something of a back story.  Told in three parts, set in Recife, the filmmaker’s hometown, in an apartment overlooking the lengthy beach, the film begins in 1980 with a family reunion, seen in flashback, where they all pay tribute to Aunt Lucía (Thaia Perez), the matriarch of the family who broke new grounds in literature and the law, serving time in prison during the 60’s for her beliefs, described in glowing terms as a “firecracker.”  While there is plenty of Brazilian music and dancing and tribute songs, including that oldie but goodie, “Another One Bites the Dust” by Freddie Mercury and Queen, Queen - Another One Bites the Dust (Official Video) - YouTube (3:42), in this segment, Clara (Lucía’s neice), Braga’s character, is a young girl played by Bárbara Colen.  While speeches and accolades compliment Lucía, Clara’s husband also pays tribute to Clara, who has survived a very rough year overcoming breast cancer.  By the second segment, Clara’s husband has died and she lives alone in the same apartment, attended to by her longtime housekeeper and cook Ladjane, Zoraide Coleto.  With a knock on her door, she is enticed by a small committee of men to accept a new proposal for selling her apartment to developers, as all the rest of the units in the building have been sold, though she is adamant about refusing to sell, indicating it is her intention to live the rest of her remaining years in this apartment, as it is filled with all her family memories, AQUARIUS - Kleber Mendonça Filho Film Clip YouTube (1:23).  That will not deter them, however, from resorting to unscrupulous methods in trying to wear her down.

While there are glimpses of Clara’s day-to-day life in Recife, gossiping and going out with girlfriends, receiving loving visits from her adoring children, spending time with her grandchildren, occasional evenings with available men, going to the beach nearly every day, where she is repeatedly warned by the safety conscious lifeguard Roberval (Irandhir Santos) not to go further than waist deep, as there are ferocious rip currents, we also see her playing music at home, as she is a former music critic who prefers listening to LP records that line her living room, along with a hammock by the window where she naps, along with a large Barry Lyndon poster, where the film could easily be considered a musical for all the selections included in the film, where Braga has a memorable scene dancing alone in her apartment.  One of the more curious aspects is the picture of class divide, where the rich and poor are separated in Recife by a sewage drainoff that runs across the sands into the ocean, “This is where the rich part of the town ends and where the poor part of the town starts,” where we’re fortunate enough to visit Ladjane for a birthday celebration with her own family, which has an entirely different feel, as there’s less space and more people, creating a picture of congestion and claustrophobia, yet this is the everyday reality.  In a telling moment, as Clara is showing family photos in her spacious living room with her own family, Ladjane feels like one of them, pulling out a picture of her own child to share, where at least in Clara’s home this is not out of line, as there are no real boundaries between them.  While the developers try to make Clara’s life miserable, which is a concern to her children, she insists upon not letting it bother her anymore than the cultural shift from LP records to MP3’s, where she adjusts to the times, even if those around her don’t.  While she is a force of nature, as much the face of Brazil as Sophia Loren is Italy, the film becomes a study of a woman under duress, where more than just buildings are being stripped from the landscape, as Brazilian society is losing much of its traditional values in its race to the future, where money and expediency are changing not only the look but the values of a nation.  Brazil has always had a heartwarming charm, a country that embraces its beaches, its soccer team, and a quality of life, even as it experiences social turmoil, where Clara wants to stay in her apartment out of a sheer love of the place and all it represents to her, where that’s something you can’t replace.  She is a charismatic figure and a free soul that cannot be bought, yet the developers resort to egregious underhanded methods that seem to reflect what they’re willing to do for money.  Perhaps the divide between good and evil is simply too broad and exaggerated here, becoming something of a compressed time capsule of all that’s good in Brazilian society, as the moneyed interests of the future make plans to strip it all away.
Posted by Robert Kennedy at 12:00 AM