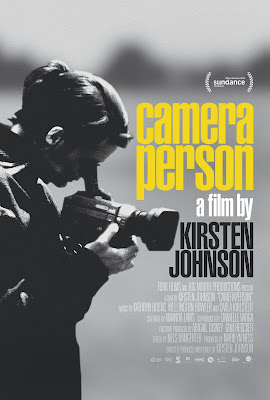 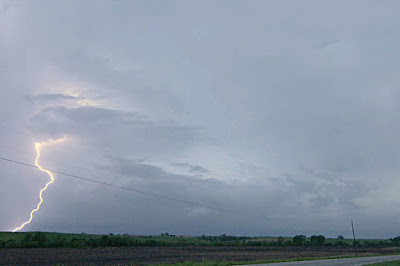 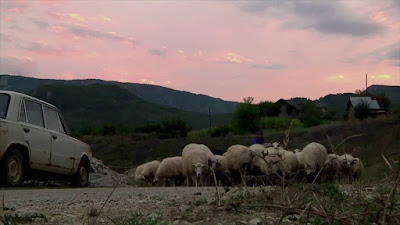 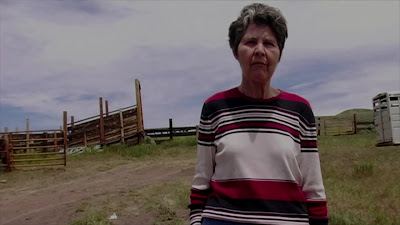 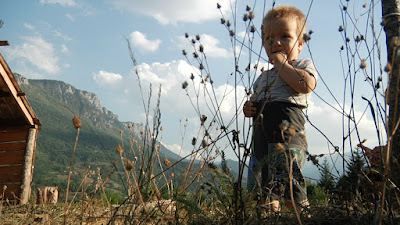 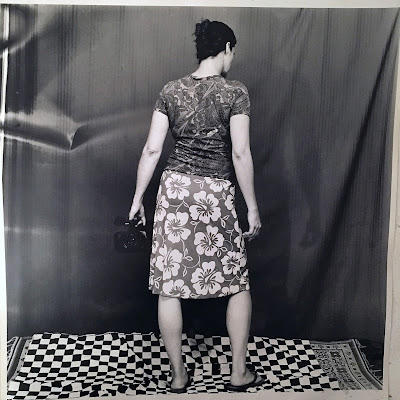 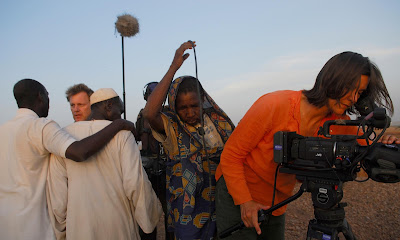 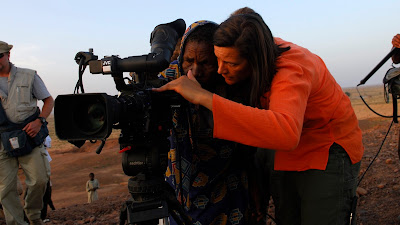 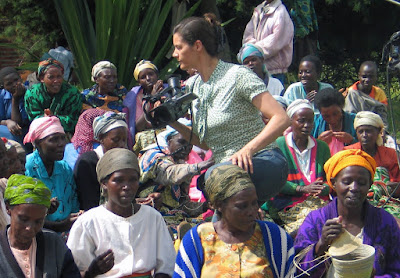 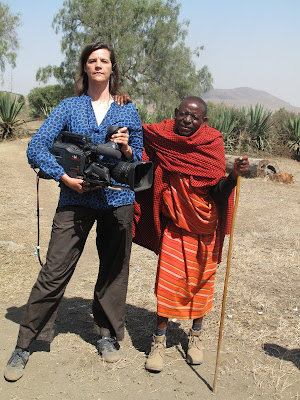 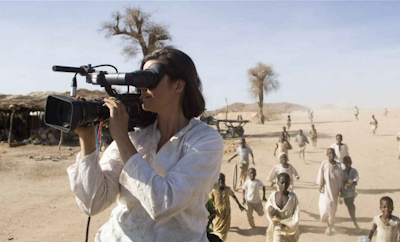 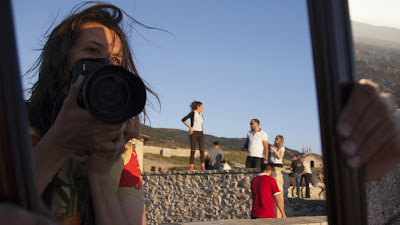 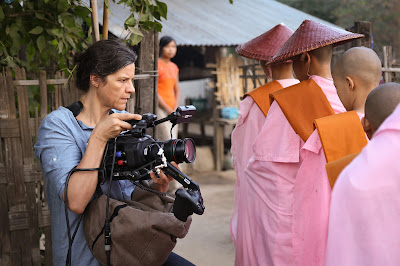 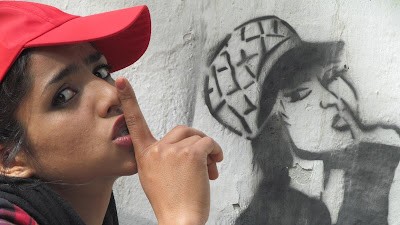 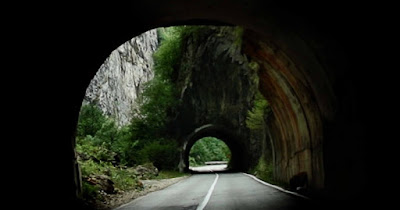 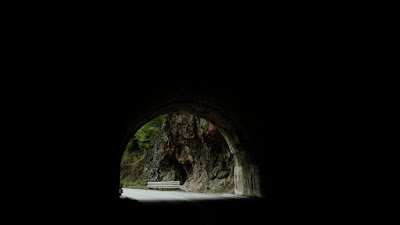 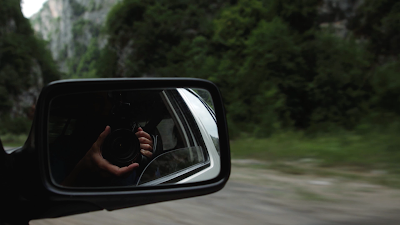 These are the images that have marked me and leave me wondering still.
—Kirsten Johnson

A collection of random outtake scenes shot by a documentary cinematographer over the course of 25 years, all strung together in an impressionistic mosaic, like fragmented memories, identified only by the place where the footage takes place, listed in intertitles on a black background, becoming a memoir and a comprehensive essay on the ethics of cinematography, having shot footage in films such as Laura Poitras’s Citizenfour (2014), Kirby Dick’s 2012 Top Ten Films of the Year: # 5 The Invisible War, Michael Moore’s Fahrenheit 9/11 (2004), and Raoul Peck’s Profit & Nothing But! Or Impolite Thoughts on the Class Struggle (2001), among others.  Kirsten Johnson is a New Yorker who graduated from Brown University in 1987 with a BA in Fine Arts and Literature, spending two years in West Africa on documentary film projects before attending FEMIS (the French National Film School) in Paris, graduating in 1994 from the cinematography department.  While she has earned a reputation for stellar documentation in other people’s films, this is one of her first films that gives voice to her own artistic expression, becoming a meditation on the art of shooting documentary subjects.  By showcasing dozens of scenes from other documentaries, the film resembles Wim Wenders portrait of Brazilian photojournalist Sebastião Salgado in 2015 Top Ten List #4 The Salt of the Earth, though each are uniquely different artists, but they raise the question of permission and consent, especially in harrowing regions around the world, as subjects rarely consent to being filmed, leaving open the question of whether art exploits human tragedy.  There is no question that images play a part in educating human consciousness, as certain images from the Vietnam War continue to haunt us literally decades after the war has ended, the Zapruder tape capturing the assassination of JFK, the first images shot by men from the moon, blacks being subjected to firehoses and attack dogs in the Civil Rights struggles in the South, or the brutal beating of Rodney King at the hands of LA police officers.  These are part of the worldwide images stored deep in the recesses of our own subconscious that reflect a collective humanity, or lack thereof, as some in war-torn regions may be inundated by little more than war, poverty, starvation, death, and trauma.
Like a scrapbook of memories, the film resembles a photo album, yet in each segment the participants mysteriously come to life as we travel around the globe visiting places like Bosnia, Darfur, Kosovo, Afghanistan, a secret prison in Yemen, a church in Rwanda, a maternity ward in Nigeria, a courtroom in Texas, and of course her mother’s sheep ranch in Wyoming.  Initially the film feels random and haphazard, with no real rhyme or reason, viewing her mother and children in her childhood home, but also including landscape shots of an approaching storm, where behind the image we hear a cough, presumably from the person shooting the footage, drawing the viewer’s attention to the woman behind the camera.  In this way she exposes herself as a living force behind the images, as the film explores the extent to which she remains personally invested, questioning the decisions she has made throughout her career, like how close should cameras squeeze in on people recalling traumas that have obviously left emotional scars, how long to hold a shot before it becomes invasive, what specific details are considered too personal, does she need to establish a rapport with subjects before shooting, and what about non cooperative subjects who are alleged to have committed criminal acts?  With her imprint all over this footage, it begins to appear less random after a while and more personal, especially her self-described “montage of horror,” when suddenly more detail is provided that identifies what happened in some of these places, where context means everything, especially a stream of places that were the sites of horrific human atrocities, where civilians were executed in horrific war crimes, such as the town of Foča, a city targeted by the Serbs during the Bosnian War, where ethnic cleansing led to massacres and mass rapes, as we see what was the police headquarters, now the site of children playing ping-pong, and the Sports Hall where women were imprisoned and raped, as we hear rape victims point out the motels used by military forces to rape women, followed by a pickup truck in Jasper, Texas that was used by three men, two avowed white supremists, to drag a black man, James Byrd Jr., for three miles to his death in 1988, dumping his severed torso in a nearby black cemetery.  The Texas District Attorney shows us the chain that was used in the crime while describing the importance of viewing gruesome photographs that captured the harrowing evidence, raising the significance of photography to bear visual witness to particularly heinous acts, as without it, many would refuse to believe the severity of what happened.  What follows are images shot from a car of a heavily protected, secret Al-Qaeda prison facility in Sana’a, Yemen, putting the taxi driver at risk by asking if they could get “closer,” while similar footage appears of torture chambers at Guantánamo, Tahrir Square in Cairo, where more than 900 civilians have been killed since 2011, Nyamata Church in Rwanda where 10,000 Tutsis were massacred, also Wounded Knee and Ground Zero at the World Trade Center, places where images merge with history.

Perhaps it comes as no surprise that Johnson began her career in 1997 shooting over 200 interviews with Holocaust survivors for the Shoah Foundation, as personal an experience as one can imagine when asking the elderly to relive their worst horrors.  While she is practiced in the sensitive art of filming women who have experienced trauma, especially rape victims in Bosnia and the U.S. Armed Forces, where much of her skill is building a trust with the most vulnerable, one of the moral dilemmas is asking them to open up their lives for the world to see while she remains safely concealed behind the camera.  One of the most affecting scenes takes place in a hospital at Kano, Nigeria where the camera observes a midwife attempt to bring an emaciated newborn who is not breathing to life in an unbroken yet prolonged shot, where you can even hear Johnson gasp at one point when the baby’s survival could depend on medical equipment that was not working at the time, yet the midwife goes through extensive maneuvers to move the baby around in different positions, including upside down, patting him on the back until miraculously he starts breathing, but barely has a pulse.  The midwife explains “He needs oxygen now.  And we don’t have oxygen in the clinic.”  Nonetheless, she wraps him in warm blankets and delivers oxygen manually through some kind of man-made device, giving him the help he needs in his first precious moments of life.   In Bosnia, a scene inadvertently veers into horror, as a young boy is playing with an axe, swinging it just inches from his younger brother’s face, an inquisitive toddler who is left on his own to explore the possible dangers of a sharp-edged instrument, a scene Johnson films with palpable anxiety.  In Zalingei, Darfur, two women whose homes were stolen by armed Arab militants secretly ask the person behind the camera if she might intervene in getting them back before returning to their habit of chopping down dead trees for firewood, as the Arabs, who they call Bastards, won’t let them anywhere near the forests, as they’ll forcefully kick them out.  Johnson’s camera was at Penn State at the site of the first football game after sex abuse charges were announced that considerably tarnished the school’s legacy, yet her camera finds the cheerleaders leading the student section in a male chorus singing of the Penn State Alma Mater, “For the glory of old State,” and in Brooklyn, New York at a Golden Glove boxing match where a split decision leaves a young boxer painfully distraught, with Johnson voyeuristically trailing behind his every move as he punches walls in disgust, screams in agony, and calls foul, fretting like a cornered animal before realizing he’s still being filmed, so she follows him stalking back out of the dressing room and into the arena where the camera finds him sobbing in the arms of his mother.  Johnson follows the story of one of the few Muslim families returning to Bosnia years after the war, seen pleasantly growing coffee and picking blueberries, with the filmmaker returning 5 years later to visit them, as despite the horrific memories of war crimes, she had “pleasant” memories of this family, and they are happy to see her as well, exchanging photos of children.  Among the more personal shots are brief scenes of Johnson’s own mother who has been stricken with Alzheimer’s, seen surprised, uncertain who this strange and mysterious person may be, later in a moment of recognition she’s seen brushing her daughter’s hair, where we catch a glimpse of the filmmaker in the mirror.  Yet of all the stories surrounding the film, one stands out, a lone elderly man who survived the Rwandan massacres, who directed her down into a decrepit crypt of wooden caskets in the mud, opening the caskets showing her the dead bodies, insisting that she film it.  He was like a guardian of the graves that wanted the world to know what happened there.  Johnson perhaps surprised herself to learn afterwards that she kept her camera turned off, as some things are not meant to be seen.
Posted by Robert Kennedy at 12:01 AM