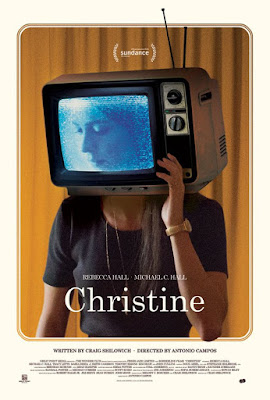 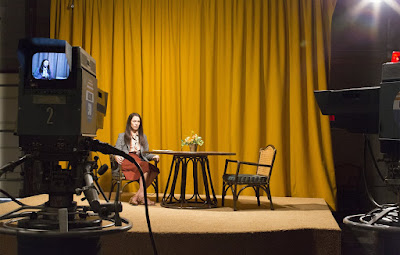 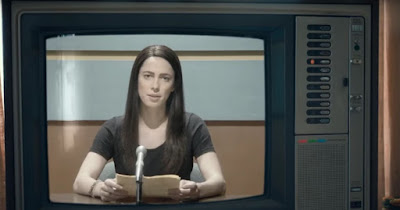 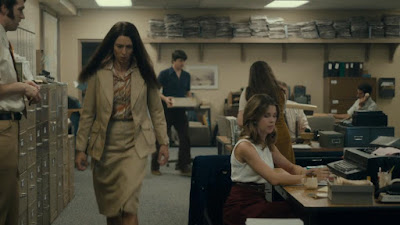 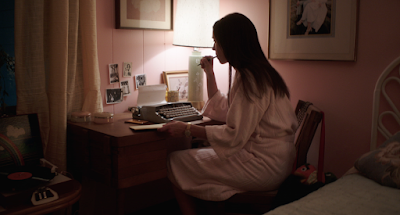 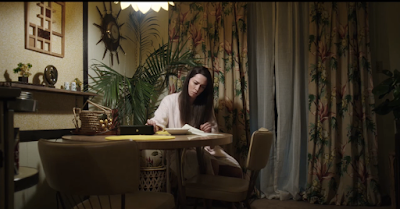 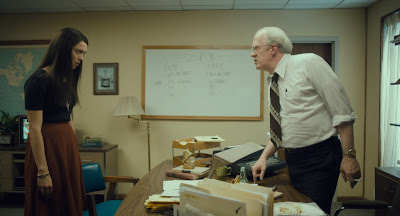 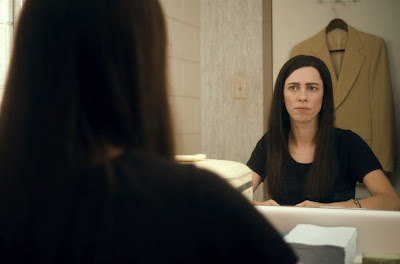 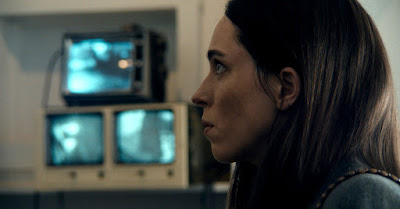 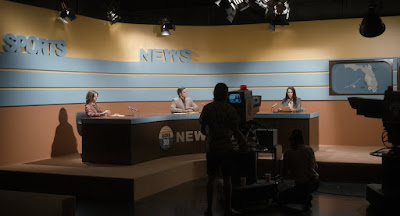 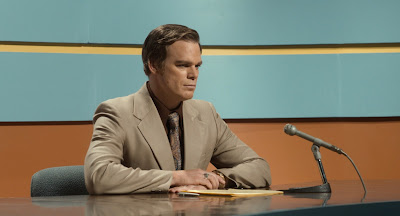 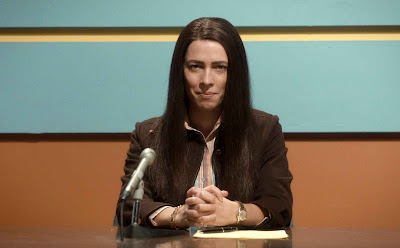 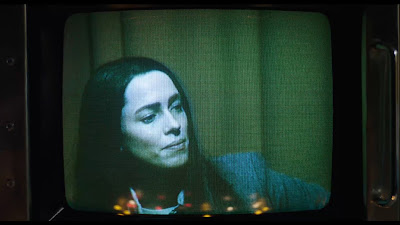 Well, if ever you needed a reason “not” to live in Sarasota, Florida, this would be it, set in the vacuousness of a distant time, with occasional references to the Watergate era, where the insipidness of the period musical selections may make you want to pull out your hair instead of reminisce.  From the director of the eye-raising AFTERSCHOOL (2008), one of the few films that actually understands the YouTube generation and the prominent influence of the Internet in the lives of high school kids, this is an entirely different exploration of dysfunction at work, largely a character study of a single real-life individual, Christine Chubbuck (Rebecca Hall), a Sarasota news reporter who pulled out a gun and shot herself during a live news broadcast in 1974, perhaps the only known example of a suicide captured live on the air.  Rather than react in horror, the film attempts to put the pieces together before it happened, set against the other tragedies that were occurring in the post-Vietnam, Watergate era, where the nation was inundated by a series of catastrophic events, including the continual journalistic exposure of lies and a governmental cover-up from the office of the Presidency, where day by day, new revelations seemed to unravel existing beliefs about the role of government in our lives, eventually leading to a Presidential resignation and an eventual pardon for all crimes committed while in office.  While this only plays out as an annoying backdrop, Chubbuck’s suicide may seem like a small indicator of larger societal ills, yet most likely she was suffering from undiagnosed and untreated mental health issues, which is a reflection of our current government posture to close mental health hospitals state by state in cost cutting measures and then deny the significance of mental health issues until “after” the explosions, as there’s been no remedies from the Columbine-like mass shootings that continue to plague our nation, University of Texas, 1966 (18 killings), Luby’s Cafeteria, 1991 (23 killed), Columbine High School, 1999 (13 killed), Virginia Tech University, 2007 (32 killed), Sandy Hook elementary school, 2012 (27 killed), Pulse Nightclub, 2016 (49 killed), for example, as there are more mass shootings in America than any other country, where each event stands out as a stark American tragedy.  Yet what, if anything, is being done about it?  While this film itself doesn’t ask any of these questions, it doesn’t exist in a vacuum either, where to this day, most urban news reports lead their nightly broadcasts with police blotter information, including the number of deaths that reportedly occurred.  Knowing the outcome before the film begins has a chilling overall effect, much like Gus van Sant’s ELEPHANT (2003), where a sense of dread kicks in as the moment approaches.

While the centerpiece of the film is one of the most shocking moments in television history, the film is comprised of small, absurdly amusing moments mixed with pathos in the harrowing life of Christine Lubbock leading up to that moment, where she has a history of depression, is socially awkward, remains a virgin at age 29, and never really fits in anywhere, yet has this ambitious streak where she has delusions of grandeur, seen in front of cameras doing an imaginary interview with a non-existent President Richard Nixon, who is instead just an empty chair, yet the human interest stories that she’s assigned to are lighthearted puff pieces about ordinary people who raise chickens or grow strawberries.  Her smothering relationship living with her mother (J. Smith-Cameron) is reminiscent of Ruppert Pupkin in Scorsese’s scathing satire KING OF COMEDY (1982), as both are achingly lonely, creating fantasy worlds that help them cope with the psychological schisms in their fractured view of the world around them, where Christine develops a comedy act between two hand sock puppets that she performs to help educate disabled children, which is easily the most outrageously original aspect of the film, as she recreates moral lessons that she performs alone or in front of preschoolers, offering us insight into her psychological mindset, like a secret passageway into her subconscious that is sensitive and highly aware of how people should treat one another.  “How do you know it’s a stranger?” one puppet asks another.  “What if you know them, but you don’t really know them?”  All right, it can get a bit creepy.  Her lesson on how it’s OK to just be quiet with one another is poignant and especially shrewd.  While she jots down notes of her personal objectives, like a must do list in the form of a diary, where she’s repeatedly telling herself the things she needs to do to be more effective, yet she’s continually discouraged on the job, butting heads and remaining at odds with her boss Michael (Tracy Letts), who implements the “If it bleeds, it leads” philosophy, as he wants to spice up the broadcasts due to such horrible ratings that he fears the station will be shut down, as the owner of the affiliate, Bob Anderson (John Cullum), announces he intends to visit the station.  Despite her insistence on barging into Michael’s office whenever she feels like it, irrespective if he’s in the middle of a meeting, this practice doesn’t win her any favors, as Michael has little patience for her antics, and instead just finds her rude and overbearing.  “You know what your problem is, Chubbuck?  You’re a feminist.  You think that the way to get ahead is by talking louder than the other guy.  That’s the whole movement in a nutshell.”

Adapted from an extensive Washington Post article by Sally Quinn in 1974, Sally Quinn's article about Chubbuck for the Washington Post, we learn that George (Michael C. Hall), the news anchor that Christine secretly fantasizes about in the film was actually a stockbroker who came into the studio to read stock reports on the air.  While the director Antonio Campos has a history of realistically portraying the psychologically disturbed, his previous works both male portraits, this film has an awkward feel all around, especially from a male director, who puts the female protagonist in a fish bowl and allows her to sink or swim, feeling exploitive from start to finish, as if it’s showcasing her worst instincts, where in some cases we are laughing at her, as her behavior deviates to the weird and bizarre, never really getting inside her head, showing little sympathy, where viewers are never comfortable in her presence, as the film never reveals much insight into why she is this way, or what happened in the past, only that she feels uncomfortable in her own skin.  Prone to occasional rants, which scream of self-centered middle class entitlement, where she’s not getting what she thinks she deserves, from her job, her mother, existing relationships, never really feeling loved or appreciated, though objectively speaking, her mother is her biggest supporter and always seems to have her best interests at heart, while her job offers her plenty of opportunities, but she fails to take advantage of them, never establishing her own niche that singles her work out as significant.  Her camera operator Jean (Maria Dizzia), probably her best friend, is extremely sympathetic and tries to help her at work, but Christine negates and minimizes the influence of others, thinking exclusively of herself.  Part of the reason she’s not very good doing human interest stories is that she expresses so little human interest, continually thinking she’s better than everybody else.  What really sets her off is the discovery that news anchor George is being promoted, where he’ll be working in a bigger market, something she felt was rightfully hers, where she’s extremely conflicted by the idea that someone other than herself might be more qualified.  In her world that’s simply not possible, feeling there must be some kind of mistake, demanding a recount, of sorts, thinking they must have overlooked what she means to the station.  Veering into a downward trajectory, as if to show them just how important she is, she asks for an opportunity to work at the anchor desk, where she devises this plan to shoot herself on the air, complete with typewritten script notes which she utters verbatim, “In keeping with Channel 40’s policy of bringing you the latest in blood and guts, and in living color, you are going to see another first:  attempted suicide.”  While it’s thought that only a few hundred people saw what occurred, the footage quickly disappeared, never to be seen again, but the story made the rounds of all the nightly news reports, and some think this was the origin of Paddy Chayefsky’s brilliant satire Network (1976), conceived in a post-Watergate decade that cynically invented happy news broadcasts to boost ratings, while similarly producing a cheerful newsroom comedy sitcom like The Mary Tyler Moore Show (1970 – 77), which eerily closes the film with a kind of illusory reality.
Posted by Robert Kennedy at 12:01 AM