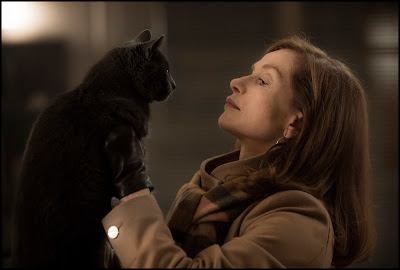 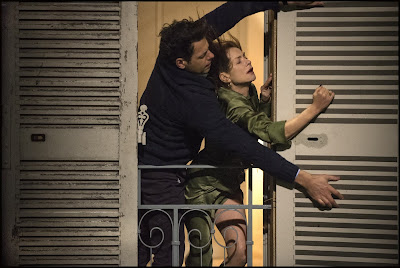 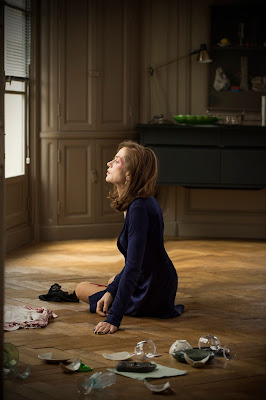 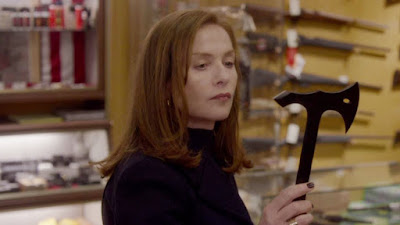 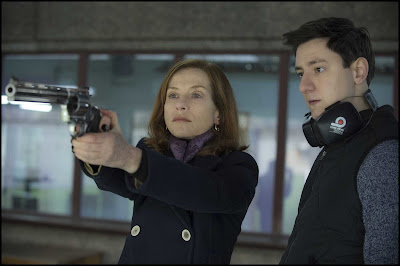 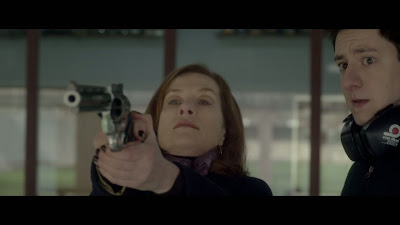 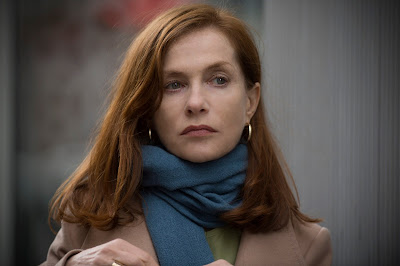 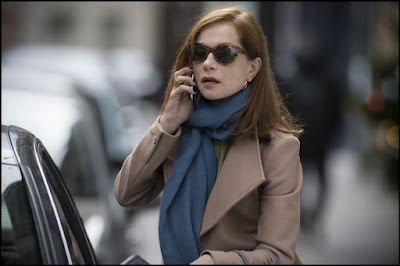 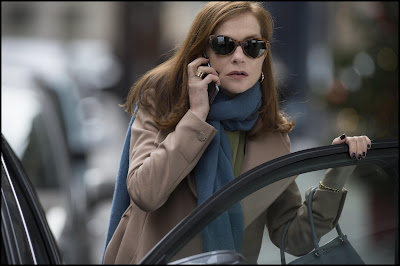 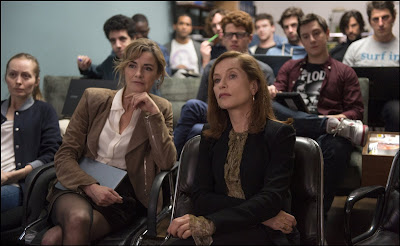 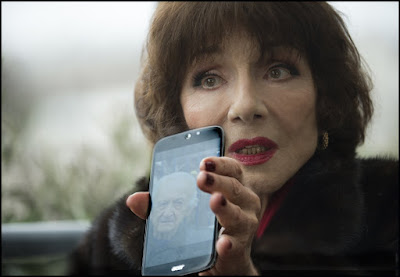 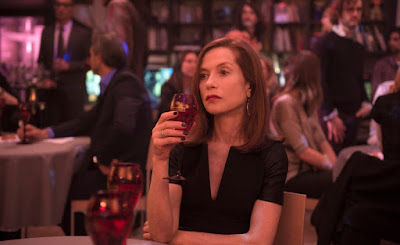 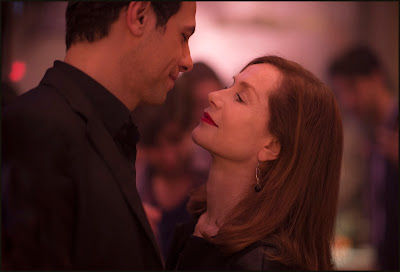 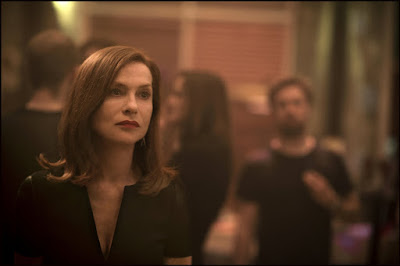 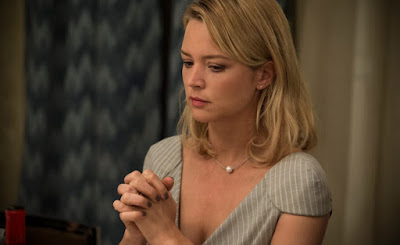 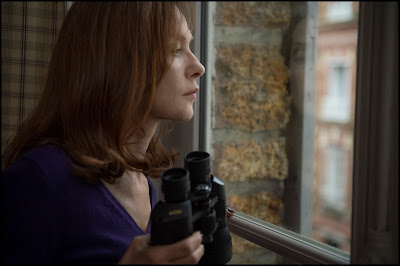 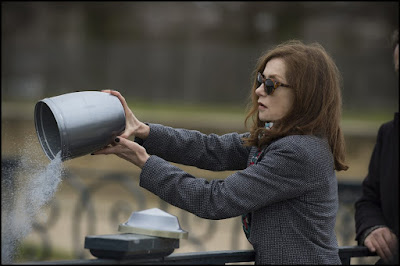 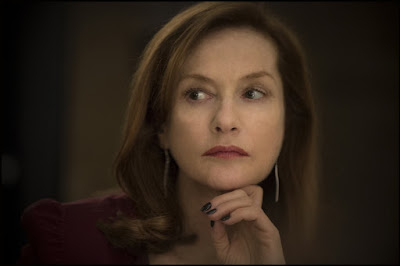 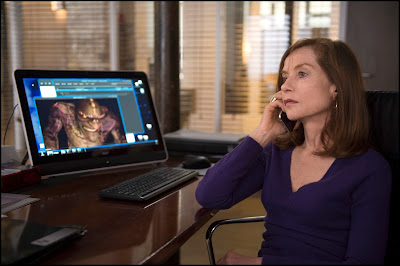 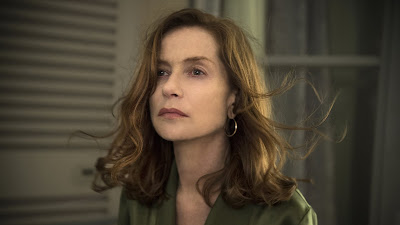 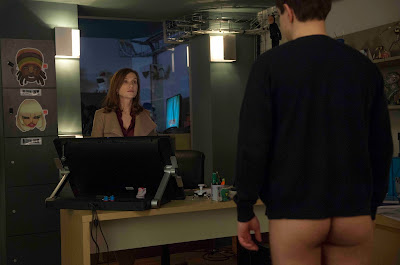 One sick fuck of a movie, one filled with disturbingly violent, adolescent male sex fantasies that degrade women, creating an ugly, highly exploitive, misogynistic atmosphere throughout, that is redeemed somewhat by a stupefyingly dark performance by Isabelle Huppert that is so over-the-top that it has comical elements, but honestly, despite all the accolades, this is a mindlessly excessive provocation that will end up doing more harm than good, as it normalizes criminal behavior, makes it blend in with normal bourgeois society where the participants often can’t tell the difference.  While that should be ridiculous, or hilarious, it is neither, as instead it sets a fatalistic tone of gloom that pervades throughout the entire picture, as if saturated by toxic air.  When considering the source, Dutch film director Paul Verhoeven, this is par for the course, as he seems to specialize in morally transgressive material, usually crossing the line into distasteful territory, where some obviously have no problem with it, but it remains surprising how something this revoltingly emptyheaded can be dressed up in arthouse production values, a stellar cast, and somehow the offensive material is considered acceptable.  Sorry, but it falls into the crassly exploitive territory, where this is one of the overrated films of the year, including Huppert’s performance, which is all show and surface texture, more a display of the grotesque, as the film has little redeeming value.  The film shows a rape scene not once, twice, or even three times, but four times, showcasing it for exploitive purposes, then immediately shifting gears, turning to Huppert’s blasé attitude afterwards, ordering sushi by phone, asking incredibly, “What is a holiday roll?,” before somehow blending rape into normalized sexual relations with people preferring a hard-edged, sadomasochistic kick in the head for their pleasure.  On top of this, the rape victim (Huppert) owns a video-game company that saturates its graphic content with increasingly violent, sadistic rape imagery that she criticizes at one point as “too timid,” where we then have to deal with the startlingly shallow, comic book personalities of the few insipid characters that create this kind of junk for a living. Before long, all of this has been mixed into an acceptable middle class attitude, where repeated rape attacks go unreported to the police, where violent sex becomes normalized in existing relationships, where the bottom line portrayal of men is so cliché driven, as if all they have is a penis, and nothing else matters or defines their character, as if this pervasive culture is contaminated by nothing but sick and disgusting men, suggesting the world would be better off without them, as who really needs them?  End of story.  And to further delineate a line of demarcation, let’s call the picture ELLE (She).

The idea that one can tastefully trivialize and make a mockery of rape culture in glossy arthouse cinema is simply a bad idea, as is the idea of Huppert being an appropriate feminist response to violently inflicted trauma, applying vigilante justice to her perpetrator, encouraging him to do it without the mask on, as her character is too internally damaged to be relatable or believable, but again remains in the comic book world of delusion and adolescent fantasy, where the ridiculous nature of the film simply can’t be taken seriously.  Overall, people are getting sucker punched with this one.  Ostensibly a film about a middle-aged businesswoman Michèle Leblanc (Huppert), seen at the opening getting brutally raped in her own home by a man coming through the window in a ski mask dressed all in black, leaving her battered and bloodied.  But instead of going to the police, we learn she distrusts and despises them due to her past history, as her father is a convicted serial killer from the 1970’s who forced her, at the age of ten, to assist in the burning of all their belongings afterwards, where she was literally covered in ash when discovered by the police, becoming a subject of harassment, with her father serving out the rest of his life in prison, though he does have parole hearings every ten years.  Whenever her father’s infamous deeds appear in the news, Michèle is dragged through the mud as well, with the public reviling her and expressing their scorn.  As if in protest to good taste, Michèle along with her best friend Anna (Anne Consigny) are literary book editors who develop a brutally violent video-game business catering to teenage boys that exploits grotesque rape imagery, complete with ecstatic moans, appealing to the lowest element of male fantasia and delusion, which, of course, makes them highly successful, allowing her to live alone, along with her cat, in a lavish home surrounded by dozens of open windows allowing the intruder to appear.  As if to place her in a moral purgatory for which there is no escape, she is sleeping with her best friend’s husband, Robert (Christian Berkel), while separated from her own, Richard (Charles Berling), while raising an oblivious grown son who seems to have more psychological issues than anyone else in the film, which of course remain completely unaddressed.  At the same time, her elderly mother (Judith Magre) relies upon plastic surgery and paid young male escorts to make her feel young, a habit Michèle finds revolting and disgusting.  While this rapist is on the loose, he chooses to continue to send sick and twisted messages on her phone and in her bed, all of which suggest she remains a target, along with crude, mocking messages from within her own company, affixing her face to the animated female character getting raped, which is sent to the working computers of the entire staff.

Everything described thus far is simply the set-up, the terms of the game from which Michèle must maneuver and operate in order to turn the tables and regain a position of power, changing all the locks in her home, buying a small axe and some toxic spray while taking target practice at a gun range in order to protect herself, while Verhoeven has surrounded her with a myriad of possible subjects, any one of which have a strong reason to hate her, while also protruding into her dreams, where we see various revenge scenarios playing out in her imagination.  As for Michèle herself, she thrives on other people’s discomfort, exploiting their weaknesses, developing a casual disregard for conventional morality and has no problem snooping into the computers of her coworkers searching for clues, masturbating in a Buñuelian moment while watching a neighboring couple set up a Nativity scene, reaching orgasm exactly when the lights come on, or launching into a lengthy discourse on her own personal role in her father’s infamous deeds that she relates dispassionately at a party to one of her neighbors, Patrick (Laurent Lafitte), a stock trader with a beautiful but devoutly Catholic wife, Rebecca (Virginie Efira), where she may as well be describing a list of items on a shopping list, acting as if there is nothing inappropriate about it while at the same time carefully gauging his response.  Rather than offer any relevant comment on rape or societal conventions, Verhoeven is content to see the world through the disfigured life of Michèle, a tragic figure in every respect, considering what happened to her at a young age, yet the director refuses to see her as a victim and instead uses her psychological trauma as an excuse to explore all manner of human degradation, including sexual humiliation or those who are aroused by being beaten and raped, where he is trivializing human behavior, suggesting it’s all part of a wide-ranging collection of bizarre sexual behavior, suggesting I’m OK if you’re OK, yet it’s an excuse to display sadomasochistic male fantasies onscreen, suggesting what’s taking place behind closed doors could be anything, aberrant or otherwise, suggesting it’s all part of the human face.  What this adds to any discussion on human behavior is negligible, as it’s all been done to much better effect by Olivier Assayas in Demonlover (2002), one of the few artists to examine the detrimental effects of brutally violating porn on the Internet, suggesting it goes beyond mere desensitizing but is more about dehumanization, combining the deep-seeded ramifications of a soulless Internet entity with the ruthless ambitions of capitalism.  By comparison, Verhoeven’s revenge saga is deceptively shallow and a major disappointment, working in the French language for the first time in the director’s career, reduced to an offensive onslaught of hateful and demeaning imagery, yet it is a rather faithful adaptation of the 2012 Philippe Djian novel Oh…, the same writer who wrote Betty Blue (37°2 Le Matin) (1986), an author who is extremely popular in Europe but utterly overlooked in the United States, where there are few revelations anywhere to be found that distinguish this from typical male sexist content, instead becoming an opportunity to plaster the screen with exploitation genre, fetishistic rape imagery that is meant to be shocking, all in the name of entertainment.  Perhaps Dr. Verhoeven could move into pedophilia next.
Posted by Robert Kennedy at 12:01 AM