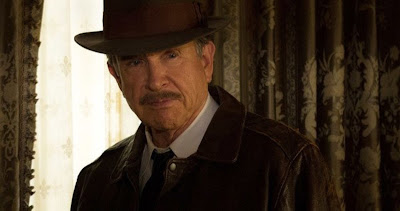 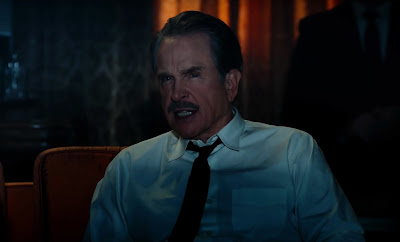 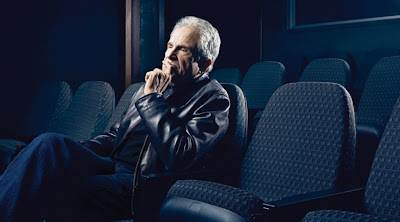 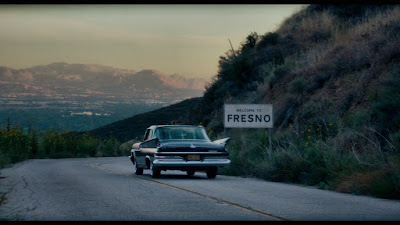 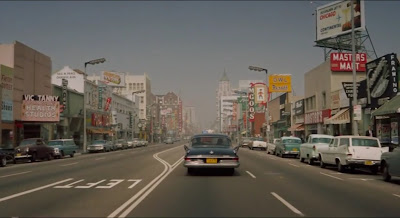 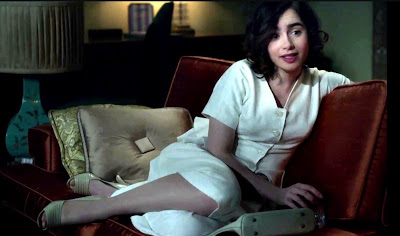 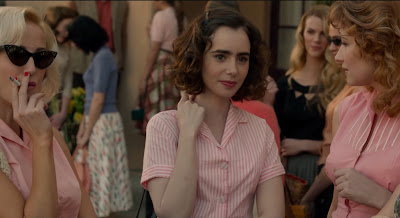 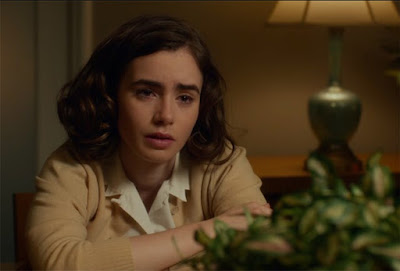 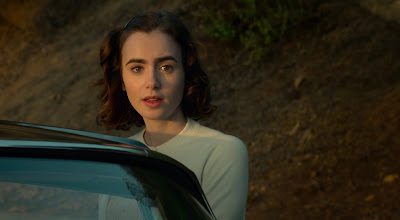 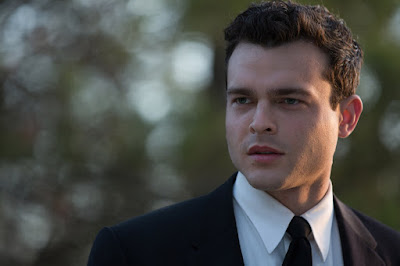 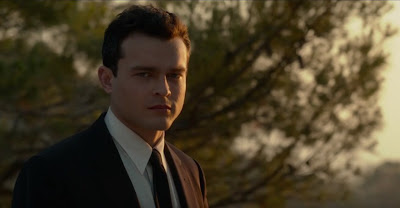 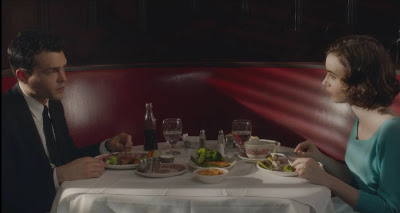 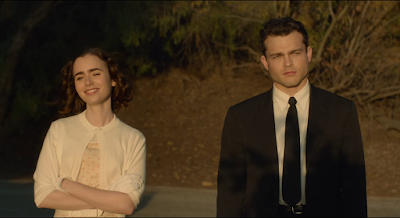 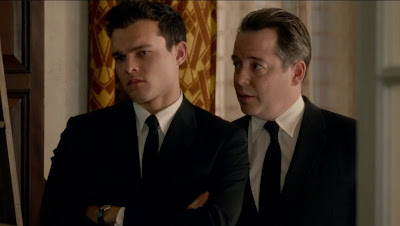 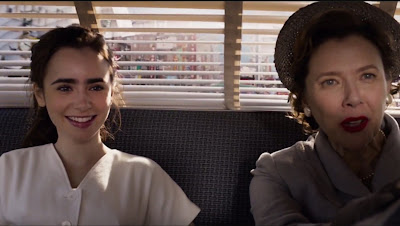 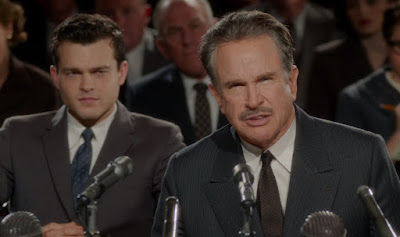 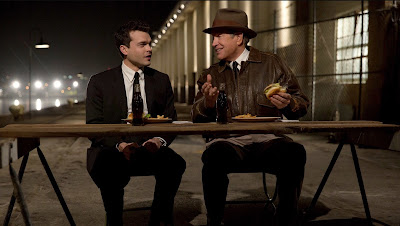 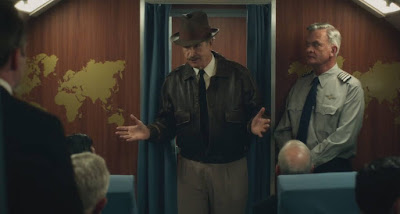 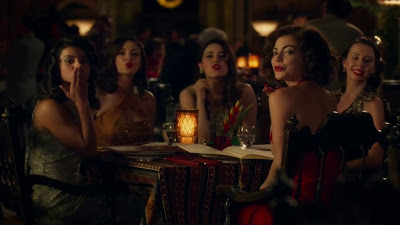 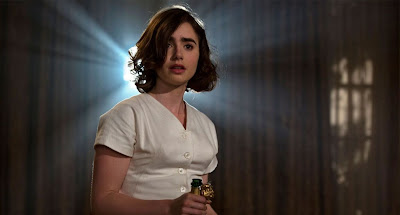 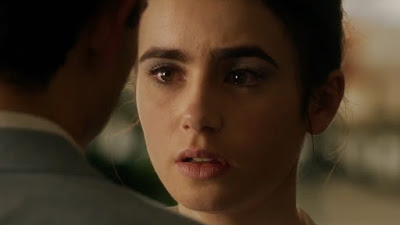 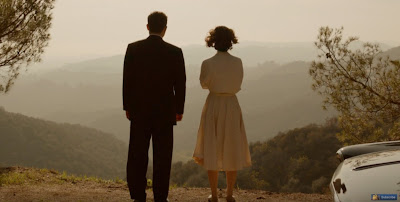 A lighthearted Hollywood romance that aspires to be more, where Warren Beatty comes out of a 15-year absence to play the part of a doddering Howard Hughes near the twilight of his career, as he was making the transition from a semi-recluse in Los Angeles to a total recluse in Las Vegas.  Writing, directing, acting, and producing the film himself, after languishing on the shelf for a few years, you’d think there might be some new revelations about the character, but Beatty goes all ISHTAR (1987) on us, resorting to the same comic absurdity with which we are already quite familiar, where his stumbling eccentricities are key to understanding his overly flawed character, where you wonder how this guy could ever have earned a single dollar, much less a million and/or billion dollar empire, depending upon how much his wealth fluctuated.  The narcissistic view of himself is so over the top that you wonder if Beatty is making a comment on the Hollywood industry itself, where it thinks of itself exclusively at the expense of all other interests, remaining so out of touch with the real world that it’s only real invention is pure fantasy.  Since Hughes is known to us today as someone who went into hiding, where few ever had the chance to actually see him in his final days, it’s only natural that he remains hidden in the opening 30-minutes of the picture, where we hear about him, but never see him.  Instead the story revolves around one of the many rising starlets discovered by Hughes, flying them out to Hollywood, providing beautiful individual homes, maid service, and a private chauffeur taking them to a neverending litany of acting, singing, and dancing lessons, where all were steered into the dream of one day having the chance to appear in one of his RKO Studios motion pictures.  What they all had in common was a full-figured beauty on display, the supposed female desire of all American men, where Hughes was the original Hugh Hefner, displaying the 50’s Playboy magazine mentality even before Hefner started his enterprise.  As described in Charles Higham’s 1993 biography, Howard Hughes: The Secret Life, at least partially used in Scorsese’s depiction of Hughes in THE AVIATOR (2004):

The appropriate actress would be given the use of an elegant house in Beverly Hills or Bel-Air, with a maid. At exactly 7 a.m., she must rise and take a shower and make up. At seven-thirty, the maid would serve her breakfast. At eight, a driver would take her to acting, dancing, and singing lessons. In the afternoon, she must rest or watch TV. Shopping was permitted once a week. In the evening she would go to one of six restaurants Hughes specified. She was forbidden to date. A driver would be her companion for dinner. … The drivers were told never to negotiate bumps in a road at more than two miles an hour as the jolt to the automobile might cause the girls’ breasts to sag.

While this reflected the Hughes rule, anyone failing to adhere to the strict protocol was fired on the spot, including the chauffeurs, who were instructed to have no intimate contact with the girls, with Hughes hiring private detectives to guarantee compliance.  In this restrictive, puritanical atmosphere of the Eisenhower era of the 50’s, a love story develops between an aspiring young actress, Marla Mabrey (Lily Collins), and her assigned chauffeur Frank Forbes, Alden Ahrenreich from Hail, Caesar! (2016), something that is strictly forbidden, but they sneak around corners and learn to live by their own titular mantra.  But initially it’s all eye contact, as Frank is assigned to pick up Marla and her overly possessive mother (Annette Bening) at the airport, learning Marla was crowned the Apple Blossom Queen back in Virginia, as he drives them to a gorgeous mansion overlooking the Hollywood Bowl.  It doesn’t take long before she realizes she’s just one of dozens of girls all striving for the same thing, each one promised a screen test by Hughes.  While they all come from a strict religious background, with Frank already engaged to a high school sweetheart back home in Fresno, not much happens under the watchful eye of her mother, yet Marla, the only vulnerable character in the film, has the kind of dreamy, wild-eyed enthusiasm and innocence that other star-struck actors wish they possessed, where her real intent is not acting, but writing songs.  Part of the comic absurdity is her mother sensing what’s really going on, indignant that no one has actually met Mr. Hughes, or had a screen test, believing it’s all a sham of some kind, as these girls are being exploited without actually having a chance to appear in pictures.  Defiantly, she heads back to Virginia in a huff, leaving Marla on her own, still tapping into her own personal dreams and ambitions, not yet ready to call it quits and head back to the University of Virginia as her fallback plan.  In this opening, Frank steps out of the shadows, another small-town kid with his own dreams, where he’s got his eyes set on some property on Mullholland Drive, but he needs an investor, hoping he can entice Mr. Hughes, if he ever meets him.  In his eyes (and the audience), Marla is perceived as an ideal, a paragon of virtue, expressing exactly the same kind of illusion Hollywood personified back in the 50’s, a good Baptist girl who doesn't drink, smoke, or “go all the way,” informing her she’s not like the others, who are overtly sexual, accentuating their buxom physiques, telling her she’s an exception, that “the rules don’t apply to you.”  Spontaneously writing a song for the occasion, the romantic overtones are inevitable.

What holds the viewer’s attention early on is the complete absence of Howard Hughes, yet Marla has lofty thoughts of the kind of man he must be, extravagantly rich, everyone at his beck and call, so important and all, where she even dreams of him making a good President.  By the time she actually meets him, he appears out of the dark, tongue-tied, not even sure who she is, where they sit and eat Stouffer’s TV dinners on folding trays, peeling back the aluminum foil while Hughes awkwardly tries to think of something to say, invariably excusing himself as he attends to other pressing business, where he’s seen as a man stymied by his own changeable moods, often to the point of paralysis, where he rambles incoherently, repeats himself, and has a pathological fear that TWA executives attempting to purchase his aviation company are secretly trying to find him legally insane so they can take over the company, so he refuses to meet with them, or even reveal where he is.  In this hidden and secretive manner, he continues to conduct his company’s business, growing increasingly erratic.  Beatty seems to relish the idea of playing Hughes for laughs and comic amusement, often seen where he’s crazy as a loon, but watching a feeble old man whose best years are behind him isn’t really funny, especially when he’s obsessed by watching old movie footage of himself when he was an aviator and still a virile young man, continually reliving his youth, playing it out in his head so often he could almost believe it was still real.  This kind of pathetic display is more tragic than anything else, but the film reveals no backstory about Hughes, where we’re not given any details about what led him to this pitiful state.  The film really dovetails in exposing the mad eccentricities of the man, as it’s just not that interesting seeing someone so out of touch with himself gradually losing focus.  If he were a sympathetic figure, it might be different, but Hughes is larger than life, a demanding egomaniac obsessed only with himself, going on an outrageous binge where all he wants is Baskin Robbins banana nut ice cream, where his underlings are forced to buy all the remaining reserves as the company doesn’t make it any more, then just as quickly he changes his mind and wants something else.  The man is an infuriating business partner, where working for him is something of a nightmare.  While there are attempts to show a more intimate side of Hughes, quieter, perhaps more self-possessed, where incredibly he has romantic aspirations with Marla as well, who has grown so frustrated at the lack of progress in her career, overconsuming champagne, drinking alcohol for the first time in her life, allowing her to speak bluntly when she’s finally in the presence of the elusive one, singing a drunken arrangement of her song which plays with archival Hughes footage playing behind her, leaving the man in a trance of sensory overkill.  Out of control passions between the two lead to sex as a comical slapstick routine, becoming one of the true ick factors of the film, where he’s 79 and she looks considerably younger than 27, with more than a 50 year difference between them, where it’s hard not to see Beatty transforming into the aging Maurice Chevalier from GIGI (1958) singing “Thank Heaven for Little Girls” Thank Heaven for Little Girls from Gigi - YouTube (2:36).  While there are a few entertaining moments, mostly this is a coming out party for Lily Collins who dominates the film with her zest for life and youthful Audrey Hepburn appeal, literally stealing the film from a man who was once himself a youthful wonder and the talk of the town, rumored to have slept with nearly every female star in Hollywood, where according to Cher, “Warren has probably been with everybody I know.”  One popular theory on why Beatty turned down so many roles (prior to his marriage to Bening in 1992) was that he didn’t like interrupting his prolific love life to go to work.
Posted by Robert Kennedy at 12:05 AM