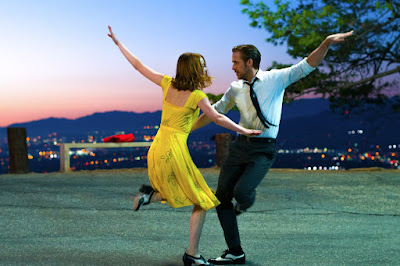 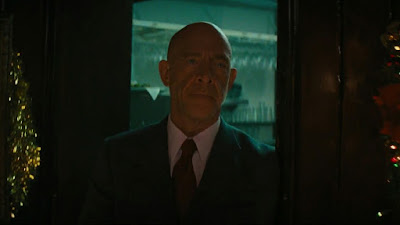 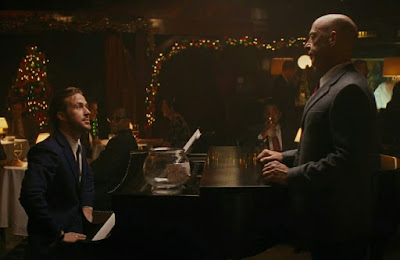 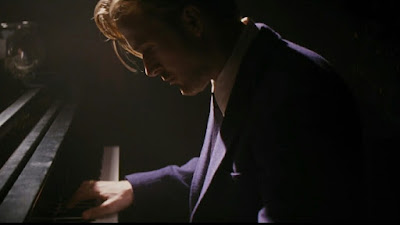 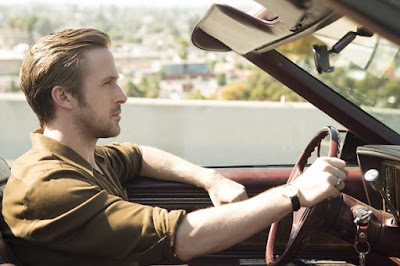 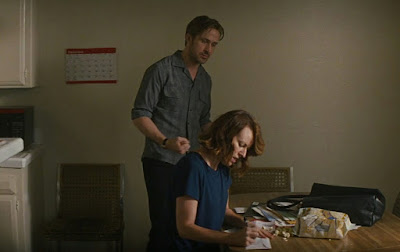 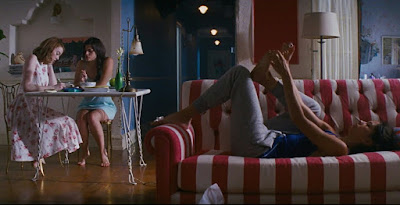 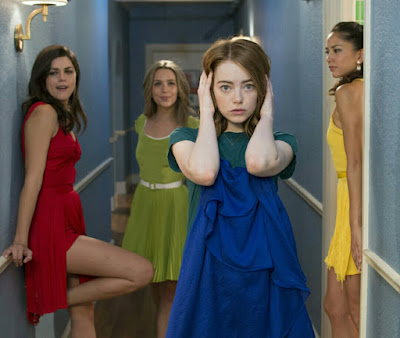 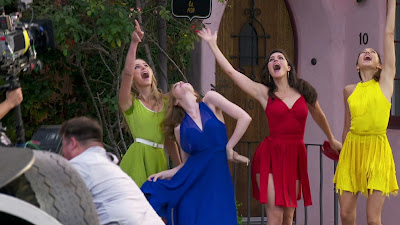 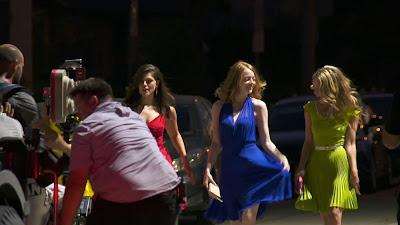 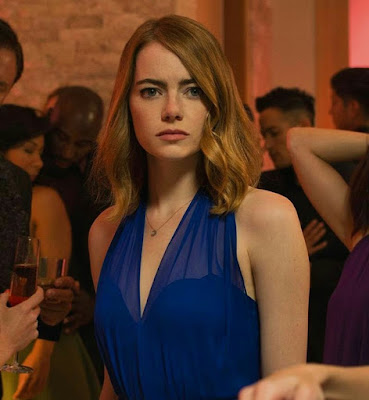 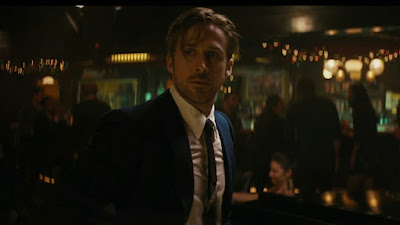 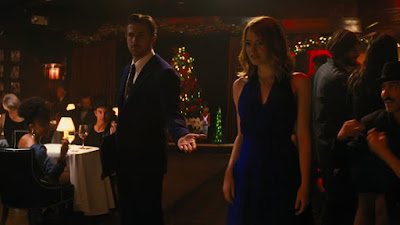 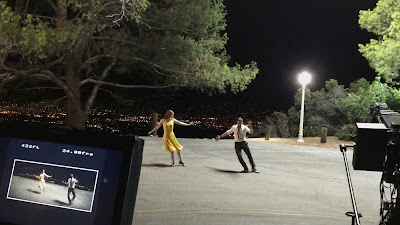 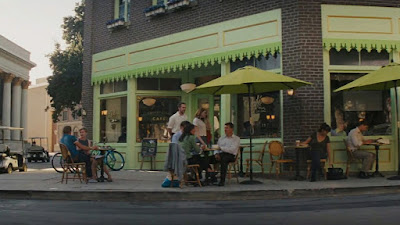 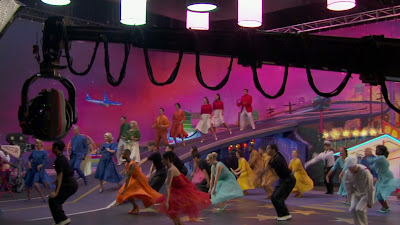 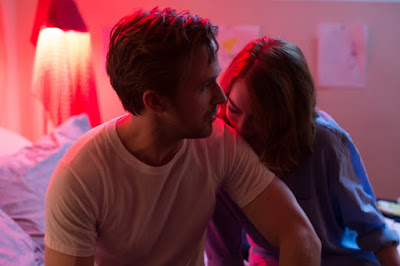 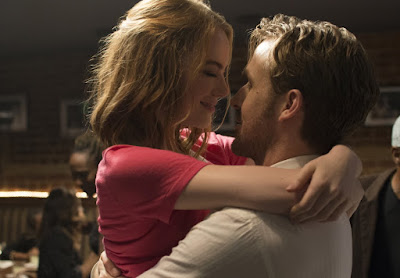 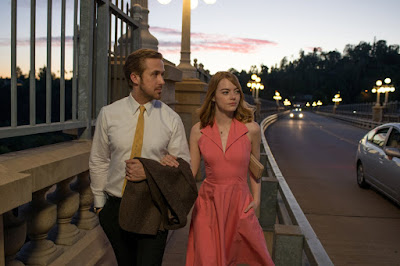 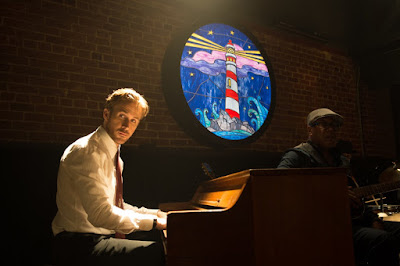 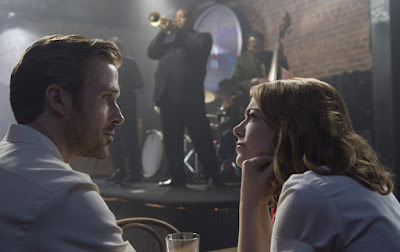 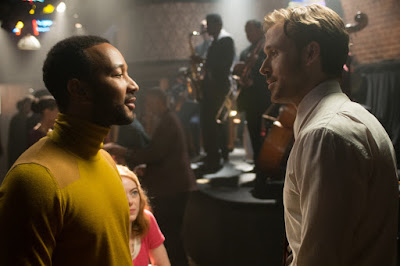 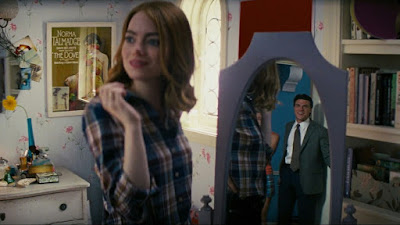 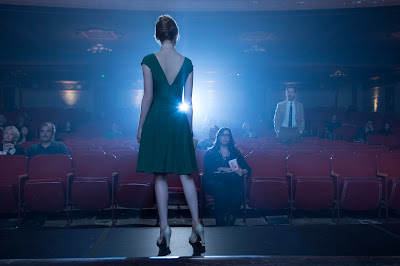 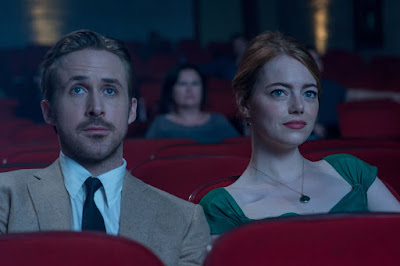 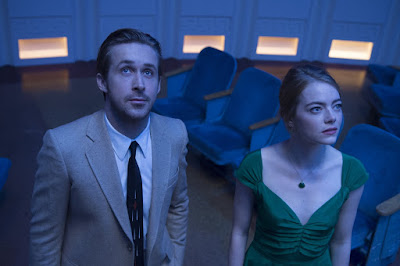 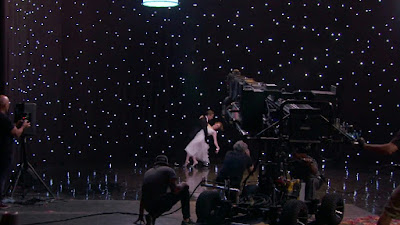 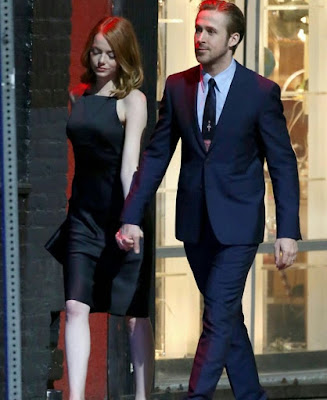 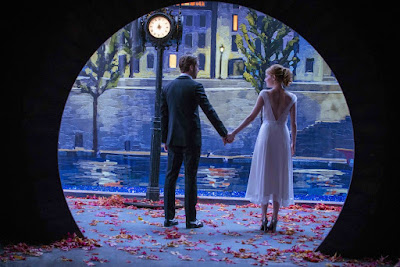 A critically acclaimed Hollywood revival that owes its artistic soul to Jacques Demy and his lavishly colorful musicals of the 60’s, The Umbrellas of Cherbourg (Les Parapluies de Cherbourg) (1964) and The Young Girls of Rochefort (Les demoiselles de Rochefort) (1967), as Demy was a great admirer of the Golden Age of MGM Hollywood musicals, where his films were basically a love letter to the Hollywood movies of the 40’s and 50’s, incorporating the dreamy music of Michel Legrand and bleak elements of poetic realism into his bursting kaleidoscope of colors that vibrantly come alive onscreen through movement and dance.  A key to understanding Demy’s films was the effortless naturalism on display, where he didn’t hire the best choreographer or music instructor, as the singing and dancing were not legendary, but simply incorporated into the rhythm of the picture, part of the DNA of the product, so characters didn’t walk so much as skip and twirl down the street, where this visualized fantasy world included the bit players who simply exited gracefully offscreen, so that the totality onscreen was always greater than the sum of the parts.  With that in mind, this film takes a while for the full effect to kick in, as at least initially it feels forced, opening without an introduction to any of the characters, so there’s no emotional connection established, yet it breaks into a show-stopping opening number that only reluctantly generates interest.  Set in a typical Los Angeles freeway traffic jam where the traffic isn’t moving at all, where one’s patience is at the boiling point, one by one people start coming out of their cars, singing and dancing, climbing on the roofs of cars, creating this fantasized, color-coordinated alternate reality that makes the wasted time feel a little more bearable.  What works is that the misery caused by this kind of freeway logjam is real, something we can all relate to, where our minds tend to wander anyway, so why not allow an outpouring of an over-sized imagination in response?  So while it’s bit contrived, reality quickly kicks back in gear once the cars start moving again, where an unlikely road rage encounter between strangers (the two protagonists) results in typical hostility and disdain.

Only afterwards are the characters introduced, where Mia (Emma Stone) works as a barista in a corner coffee shop on the grounds of a Warner Brothers movie studio, where important people come in and out, people used to being ogled and pampered, often complaining of the service, where the employees are star struck by being so close to movie stars.  When a customer accidentally spills coffee on her white blouse just before an audition, it does not bode well for her getting the job, probably more embarrassed than anything else, yet the rudeness of the people she is trying to impress stands out, cutting her off in mid-sentence, with some not even looking up from their phones.  Meanwhile, Sebastian (Ryan Gosling) lives in a near-empty apartment where none of the boxes are even opened as he wonders how he’ll pay next month’s rent, visited by an over-controlling, financially secure sister (Rosemarie DeWitt) who seems used to bossing him around trying to get his life in order, where she gets under his last nerve before he heads off to work as a jazz pianist forced to play Christmas tunes in an upscale restaurant, the epitome of artistic humiliation, which he endures for as long as he can before breaking into one of his own compositions, defying his boss’s strict instructions, none other than J. K. Simmons from Whiplash (2014).  When Mia returns home, she has a giant Ingrid Bergman poster on the wall next to her bed, with a bedroom filled with Hollywood tributes. Her roommates, all in different colored attire, break out into song trying to cheer her up by inviting her to a posh party that evening.  After initially blowing it off, she decides to join them at the last minute, but feels completely out of place in such an artificially contrived upscale environment.  Making things worse, she’s forced to walk home, as her car has been towed. Hearing a lilting melody as she passes the restaurant, a lovely jazz riff with a beautifully melancholic theme, she is drawn inside at the exact moment Sebastian is getting fired for disobedience, recognizing him from the earlier road incident, but ignoring her complimentary remarks as he steams past her out the door, soon to become a distant memory.

Months pass before they meet again, this time at another poolside Hollywood party where Sebastian’s hiding behind dark sunglasses playing electronic keyboards in an 80’s pop cover band, the evening’s entertainment, so she plays along and offers a song request, doing a blatantly fake dance in response that is actually kind of cute, showing signs of an all but absent personality.  Walking to their cars afterwards, the only emotion they share is utter sarcasm, reaching an overlook showcasing the glimmering city of lights, where despite their pretend contempt, they break out into an elegant song and dance, swinging on a lamplight in a riff of Gene Kelly and Debbie Reynolds in SINGIN IN THE RAIN (1952), lamenting how such “A Lovely Night” is wasted by being with someone who is so clearly not interested, yet for the first time a spark of magic is in the air, where we’re beginning to get the charm of these two delightful characters.  When Sebastian shows up at the coffee shop, all bets are off, as they walk through a studio lot as if they’re gliding on air, suddenly hanging on every word, confessing their innermost dreams, as she’s been striving to become a successful actress since she was a little girl, while he’s always wanted to be the owner of his own jazz club, where the chemistry between them is electric.  When she blurts out “I hate jazz,” suggesting it reminds her of Kenny G and elevator muzak, the kind of stuff that sends you to sleep, he’s compelled to reach into his soul and reveal what makes it so alive for him, suggesting every jazz musician composes their own spontaneously created symphony that is different every night, challenged by the musicians around him, the changing moods, constantly discovering new territory while playing onstage.  It’s a kind of free form poetry that only exists in this intrinsically American art form that began by blacks playing live music in the brothels and bars of New Orleans, including Louis Armstrong, one of the most influential figures whose career spanned five decades, literally introducing a new style of music to the entire world.  His enthusiasm is so apparent she can’t help but be moved by his passion, where he later brings her to a small jazz club where they are literally smitten.  This conversion, of sorts, has a way of persuading the viewers to give this kind of movie a chance, where jazz and cinema are synonymous with a treasure-trove of history, where all you have to do is kick back and enjoy, allowing the artistry to work its wonders.

Much of the film does exactly that, borrowing from the past, replicating some of the wondrous moments of movie history, where couples would fall in love and find themselves transformed by imaginary Hollywood backlot sets that couldn’t be more luxuriously decorated, transcending the limitations of theatrical space, where we watch the couple float through the stars of the Griffith Observatory, waltzing into the air as planets and galaxies roll by.  This is thoroughly enchanting stuff, where it’s hard not to be moved by the changing moods of the romantic couple whose lives become a brilliant mind-altering fantasia that comes to represent their unspoken interior worlds, filled with a dazzling elegance that literally fills the screen, shot by cinematographer Linus Sandgren in extra-wide CinemaScope.  Most of this has been seen before, where it’s like a collection from movie history, but the most poignant moments are reserved for just the two of them, as the viewers become invested in their characters once they reveal themselves to us with such brazen authenticity.  The film uses the changing seasons as chapter headings that invoke different periods of their lives, which don’t always mesh as we might expect.  Perhaps the biggest contrast comes when Sebastian is hired to play keyboards in a popular jazz fusion band called The Messengers lead by an old school friend Keith (John Legend), complete with a singer, scantily clad dancers, and other MTV music video looks, where he’s finally making money, but growing farther away from his dream.  Their onstage performance couldn’t be more hostile to the film’s artistic concept, yet it represents what’s more customarily accepted in the modern world, where the format is to make a record, then go on the road for a year or so promoting the music.  This has a disastrous effect on their relationship, while Mia devotes all her time writing and staging a one-woman play that is an instant flop, sending her back home to the safety net of her parents.  With their dreams deferred, a single event changes the status quo of avoidance and disinterest, offering Mia, and perhaps even their relationship another chance.  Her audition is the most personalized and poignant moment of the film, “The Fools Who Dream,” (“Here’s to the hearts that ache, / Here’s to the mess we make”), becoming a mantra for the thousands of people who have flocked to Hollywood having this exact same dream, just hoping they might get their chance, but the exhilaration of most are left dejected and disillusioned.  The film imagines two completely different endings, where one is like the flip side of the other, where you get your fantasy fairy tale ending as well as a more realistic possibility, where both are one in a million chances, but all it takes is that one lucky break.   Mia’s heartfelt audition is easily the most original aspect of the film and is the one scene that far and away distinguishes it from the rest, as overall the film feels more like a recreative montage of cinematic scenes and styles that came before.  Chazelle has stylishly created a melodramatic tearjerker, a musical film fantasia, and a sure audience pleaser.
Posted by Robert Kennedy at 12:01 AM