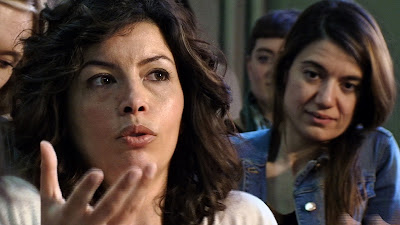 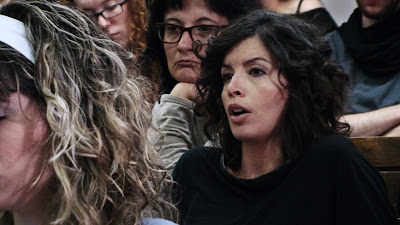 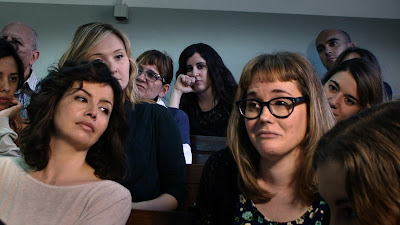 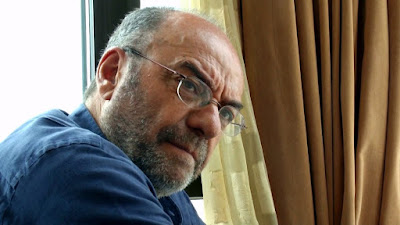 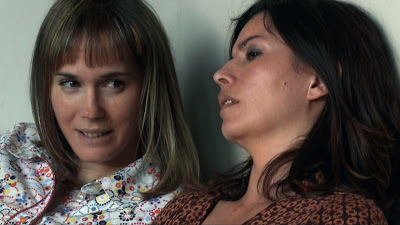 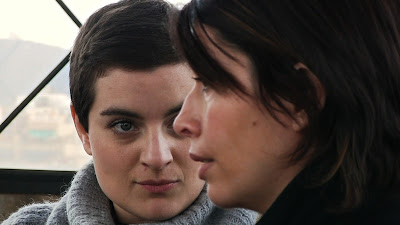 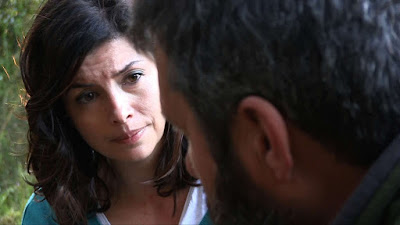 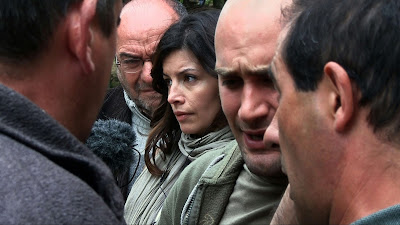 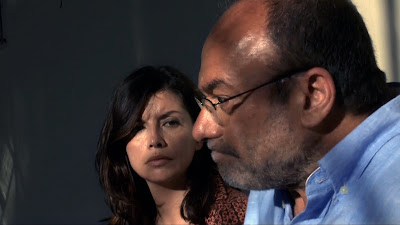 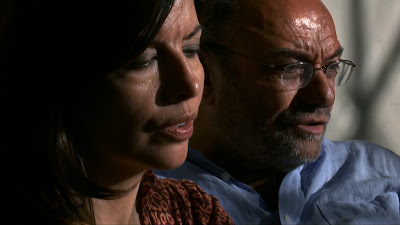 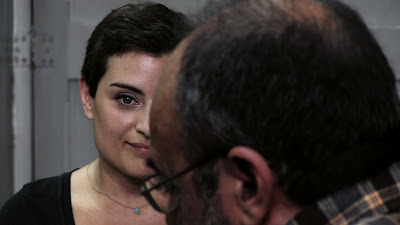 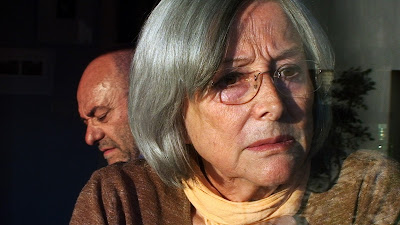 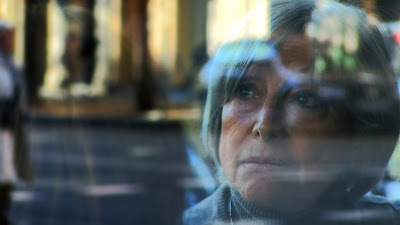 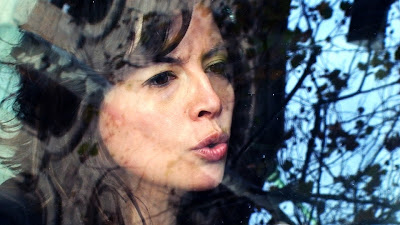 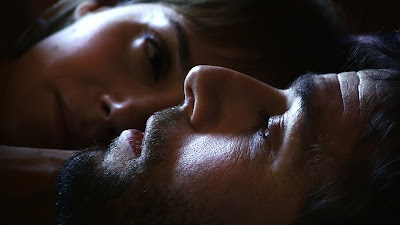 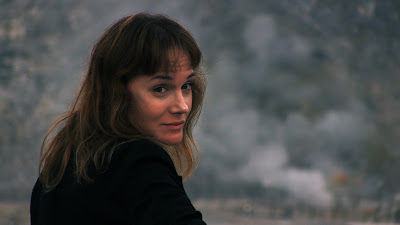 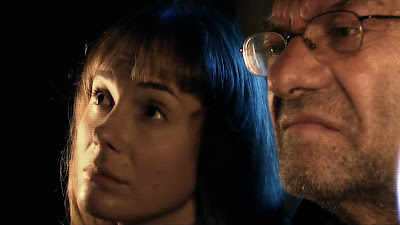 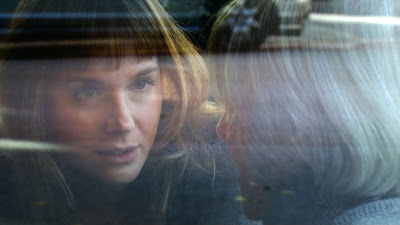 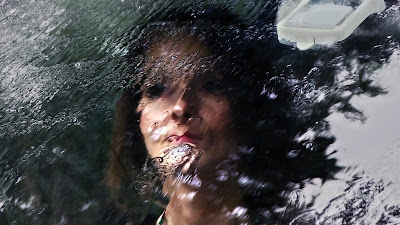 While Guerin is viewed as an experimental filmmaker, often creating images that appear to be a collage from different sources, producing painterly, impressionistic glimpses of life as seen through a fractured prism of light, his unorthodox approach has always been viewed as meditative and intellectually probing.  While that may be true here as well, this film, while its intent may be satiric, smacks of sexism, where it’s hard to get past the blatant moral transgressions being depicted.  Ostensibly an academic lecture of ideas, where Barcelona University philology professor Raffaele Pinto stands before a class of interested students and poses ideas on the origin of love in art, suggesting artists since the dawn of time have always relied upon female muses as a source of inspiration.  His ideas are actually engaging, as he breaks down complicated works of literature like Dante’s Inferno into easily understandable conversation pieces, described as men having a relationship with women, even with their dead spirits, a notion that has been around since the Greek mythology of Orpheus, where poets have carried around “the idea of love.”  What immediately stands out is that only attractive female students ask questions and articulate their positions in class, though the heightened level of classroom discussion is engaging.  What happens afterwards, however, may leave many viewers at a loss, as these attractive women are seen with the professor outside of class as well, often getting into their personal lives, where he’s seen as a father figure and confidante, perhaps even their private confessor, taking on a priestly role.  When we realize he’s having sex with these women, where relationships escalate to his personal lovers, all bets are off, as this is something else altogether.  While Guerín’s films regularly explore the boundaries between documentary and fiction, yet real or not, this is a decidedly troublesome aspect of the film as it clearly crosses into morally forbidden or taboo behavior.  One of the most damning scenes in the film is a prolonged argument between the professor and his Spanish wife Rosa (Rosa Delor Muns), which begins in an animated fury but soon unfolds into utter silence, with Rosa staring blankly out the window, neither one able to acknowledge the other.

Described at the outset as “An educational experience with Professor Raffaele Pinto, filmed by José Luis Guerín,” where you’d think initially that you’re walking into a classroom, like Wiseman’s uncommonly uplifting At Berkeley (2013), but as the word “experience” starts mulling around in your head, the meaning of the word expands into an imaginary concept where we hear the expression, “To teach is to seduce.”  Throughout the centuries poets and writers have felt emboldened in describing fiery love affairs, carnal pleasures, and intense longed-for desires, where this film seems interested in merging academia with the imagination, where there are no boundaries or prohibitions, allowing passions to exist in private dialogues and ordinary moments.  While it’s one thing to theorize, this film takes the lecture out of the classroom and allows it to live and breathe in the real world.  While Pinto is a balding man in his early 60’s, the women in his class are considerably younger and more attractive, yet sharp as a tack, where their intelligence rivals their beauty.  Emanuela (Emanuela Forgetta) is a voluptuous and fiery Italian student who seems as knowledgeable as the professor, while the others are Spanish students, where Mireia (Mireia Iniesta) is seen confiding in her, revealing she is pursuing an online love affair, apparently wondering if words alone can sustain love, where you don’t even have to meet the object of your desires in person.  Carolina (Carolina Llacher) is a short-haired student who seems more interested in challenging the professor’s theories, using more contemporary, free-form verse, for instance, instead of the preferred classical language.  Except for the professor, none of the women are referred to by their names, remaining anonymous throughout, although at least once Carolina is referred to by name from one of the other students.  This tends to minimize any associated reality and instead they are more mythical creatures, existing in the stream of thought, necessary in the pursuit of ideas.  As far as Pinto is concerned the women are real, where his justification to his wife is, “I fall in love within a teaching relationship,” a rationalization that she simply refuses to accept.

In private discussions, student papers are critiqued and evaluated, where he retains his professorial relationship, but especially concerning Carolina, he’s not very open minded to new ideas or concepts.  Who’s to say what she expounds is any less exemplary than his own philosophy, but he excoriates the very notion that she would communicate “outside” the boundaries of “his” guidelines, which at the very least appears to be hypocritical and sexist.  Poetry of any kind remains within the stream of thought and can be used to communicate and express a myriad of ideas, perhaps even more than the professor is willing to consider.  When she is soundly rejected, she again confides with Emanuela, the student/professor among them, who reminds her she knew this would happen, so what did she expect?  Mireia actually travels with the professor to Naples as his mistress, and is the only one seen naked in bed, where they visit various museum artifacts afterwards, reminiscent of Rossellini’s love in the ruins film, Journey to Italy (1954).  Afterwards she meets in a coffee shop with Rosa, hiding nothing, actually defending her right to be the object of the professor’s desires, yet Rosa has a larger overall view, noting that at some point, it is inevitable that the man will tire of her, and in her diminished state, what will she represent then?  Rosa is the only one in the film who seems rational and human, angered by her husband’s actions, bothered by this young girl’s insolence, yet retaining every shred of dignity even in such a compromising situation.  From her position, her husband’s experiment is nothing more than selfish male indulgence, where he’s using his position to manipulate the behavior of younger more attractive girls, where he can claim the ones he wants and reject the ones he’s not interested in, where it’s actually surprising he hasn’t gotten fired.  Despite all the flowery academia, one wonders if any of that actually comes into play when a man finds a woman he’s attracted to.  As the professor and his wife agree to share their extensive wall-sized bookshelf rather than break it in half, there is something to be said for enduring love, the kind that exists beyond all the artifice and youthful bluster, where perhaps this is all a diversionary smokescreen, as ultimately, sexual attraction can never really be explained in a classroom, as it rarely happens the way the poets see it.  Instead we are a smaller microcosm with a much shorter attention span, but we do have the capacity to dream.
Posted by Robert Kennedy at 12:00 AM