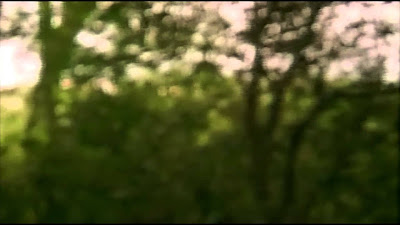 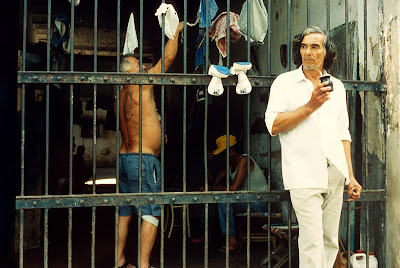 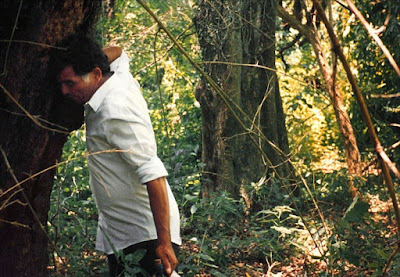 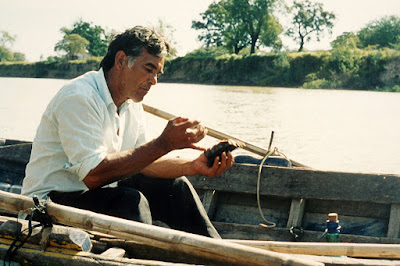 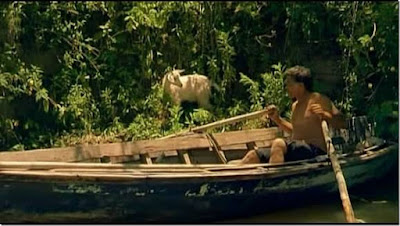 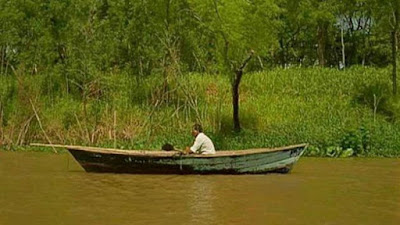 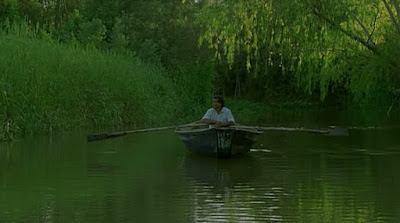 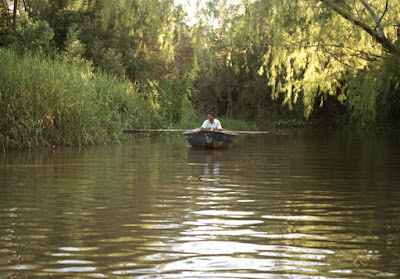 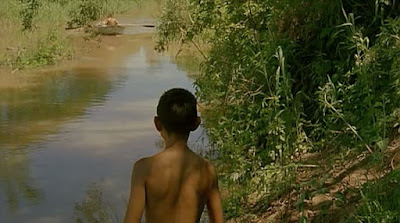 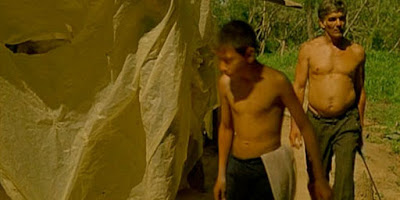 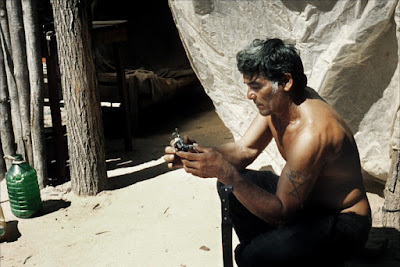 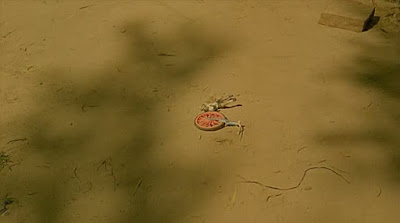 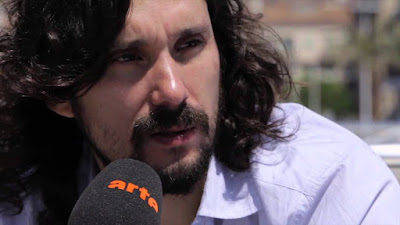 Born in Buenos Aires, raised in the city but fascinated by the countryside, where he worked on his father’s ranch, Alonso studied at the Universidad del Cine (University of Cinema) in the early 90’s, but didn’t graduate, instead learned by being an assistant director to Nicolás Sarquís, an Argentinean filmmaker and screenwriter who made slow, near wordless films and also programmed the legendary Contracampo (reserved for innovative narrative forms) section of the Mar del Plata Film Festival, the only recognized competitive feature festival in Latin America, where Alonso’s job was to deliver film reels and transfer videotapes.  It was Sarquís who introduced Argentina to the films of directors like Kiarostami, Sokurov, and Tsai Ming-liang in the late 90’s before dying of lung cancer in 2003.  By then, Alonso had already released his first film, La Libertad (Freedom) in 2001, a low-budget film made for $50,000 from his family’s money, yet shot on 35 mm, as are all of Alonso’s films.  After spending a few years on land in the country purchased by his father, he was drawn by the less complicated lives, where people spent less time talking, yet were arguably more aware of the natural world around them.  With the director present at the screening, the first thing Alonso does before making a film is search for an interesting location, finding an excuse to film there, where his first film took him into Argentina’s Pampas region, literally immersing himself, bringing a sleeping bag and tent, living alongside locals in the region until he discovers a feature subject, essentially ignoring a traditional narrative.  The three films, La Libertad (Freedom) (2001), LOS MUERTOS (2004), and Liverpool (2008), comprise an aptly named Lonely Men Trilogy, as each examines the solitary lives of the rural poor by following a near wordless journey of isolated protagonists in remote regions who barely utter a word as they journey through unchartered territory that may as well be the end of the world, as one of the director’s interests is to confront the viewer with primitive ways of life that are as far removed from civilization as possible, where the mysterious world they live in becomes the central focus of the film.  Discovering non-professionals in their own environment, his films use long, contemplative takes to observe otherwise unknown and invisible characters in their own natural habitat, using experimental and abstract methods, establishing Alonso as one of the leading proponents of slow and contemplative cinema.

Made three years later for only $29,000, LOS MUERTOS was shot in four weeks using the same crew as his first film, where Alonso’s idea to procure financing was to shoot an opening scene, then show it to prospective buyers in order to secure the needed financing to complete the film.  It took nearly nine months before they could begin shooting in the northern province of Corrientes where native people including the Guaraní were still living in the tropical jungle regions.  Traveling by canoe, he met the film’s subject, Argentino Vargas, while scouting locations, putting up his tent and staying with him for two or three days before asking if he’d want to be in a film.  By understanding that he’d get paid for work, the same as any other job, he agreed.  Opening with a mesmerizing slow burn through a dense jungle, where the camera acts as the eyes of the audience exploring the vicinity, which turns out to be a crime scene, as first one, then two bloodied bodies are seen sprawled on the ground.  Only a brief glimpse of the legs of the perpetrator along with a machete are seen in a portion of the frame before the entire screen fades to the color green.  The opening and closing shots are both spectacular, as is the accompanying sound design, but especially that virtuoso opening sequence, where cinema cohabitates with the outer reaches of the natural world, literally immersing viewers into the uniquely special terrain of the film, planosecuencia02 - Los muertos YouTube (3:39).  More happens in the first half of the film than the second, though little actually happens, almost all of it is wordless, as we watch a man sit, smoke, or drink maté out of a thermos.  Argentino Vargas is serving out his prison term in a work release camp without any mention to the previous images, though at some point we realize his lengthy prison sentence was for killing his younger brothers, and when he gets out, some twenty years after the crime, the film picks him up at the prison’s exit and follows him on his journey downriver to find his daughter, traveling down the Paranà River towards home, delivering a message en route to the family of a prison mate before borrowing their rowboat, where he keeps traveling further and further into the jungle, feeling a strange connection, or is it disconnection (?) to the lurking everpresent physical environment of Conrad’s Heart of Darkness.  What we discover is there was more regimen and purpose while he was in prison, that in freedom he finds himself disconnected to his former self and his life altogether, where one tends to fade in and out of various stages of consciousness while watching due to the hypnotic and somnambulistic quality of the film.

Mostly dialogue free, silent and mysterious, it seems the director has a distinct interest in expanding the edges of human consciousness, using a very non-judgmental, explorative process, where film becomes an avenue for human interaction in regions where little is known, so he simply immerses himself in unknown terrain and waits to see what happens, capturing what he can on film, using only the barest traces of a story, where he’s more interested in finding people that he’d like to shoot, where certainly part of his unique approach to cinema is using an ambiguous style that is meant to be as unreadable as the characters themselves.  As poetically beautiful as it is disconcerting, the film brims with the richly somber mood and unmatched visual attentiveness that defines the director’s oeuvre, where a mysterious aura emanates from Vargas, just as it does from the inscrutable depths of the jungle, so that they meld together in a way that blurs the lines of the man’s identity.  There is a hugely disturbing scene, where Vargas first kills and then skins a goat that he finds onshore, that plays out in real time, but this stark reality amplifies the special skills it takes to survive in this environment, becoming something of a deeply contemplative analysis of the intersection of unflinching natural events with the actions produced by man’s haunting interior psyche.  Interestingly, the film sets up the narrative expectation of a quest in which Vargas will reunite with his daughter, only to thwart those expectations, much as a similar protagonist does in Liverpool (2008), as what his life amounts to are fragments searching to be a part of a whole, returning to the scene of the crime, trying to find out what’s left of his family, but none of these ends ever connect.  In the reverberations of his past actions that spread themselves out before him like invisible waves, a reference to a 2006 film by the same name from Thai director Pen-ek Ratanaruang, he remains lost and displaced.  Screening at the Directors’ Fortnight at Cannes, some have speculated that Vargas is a compulsive murderer who would end up killing his daughter after the film ends, where the end is hugely ambiguous, as after returning back to the region where it all began, nothing has changed after twenty years, where the final shot leaves viewers wondering what happens, as it’s all offscreen, leaving it to the audience to decide. But then an excellent music track plays out over the end credits, expressing more energetic vitality than anything we’ve seen in the film, which turns out to be Argentine punk band Flor Maleva (Malevolent Flower), offering an eerie vibe, and only then does the title pop up, Los Muertos in bold red lettering, giving it an incendiary and menacing effect, where if you weren’t thinking about it before, that and the ominous prevalence of machetes, the possibility that he might have returned to finish the job he started “before” he went to jail is a distinct possibility, yet to this wavering eye he seems perfectly innocent, but we'll never know what happened.  Richly abstract, the film plays out with a puzzling elusiveness, where the dream logic of the dazzling opening sequence continues to shroud the film in mystery.
Posted by Robert Kennedy at 12:00 AM