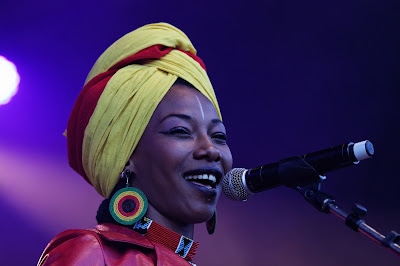 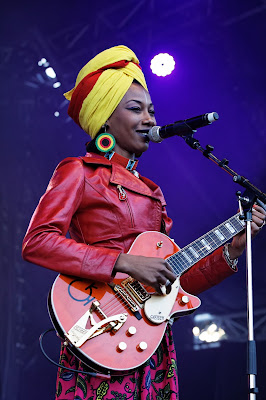 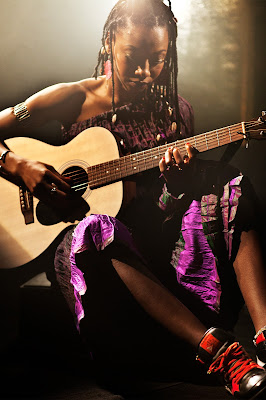 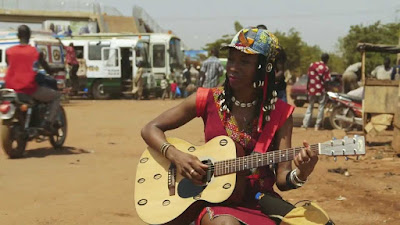 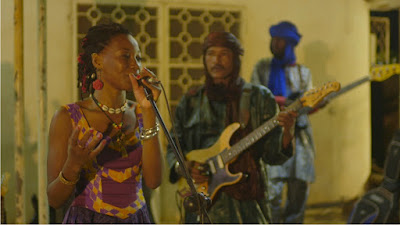 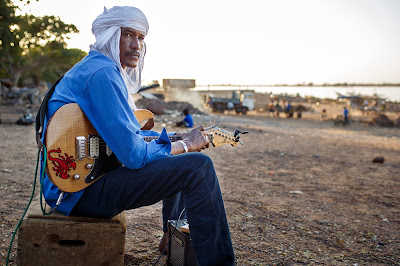 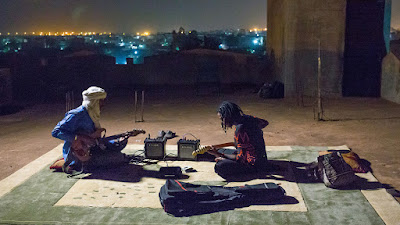 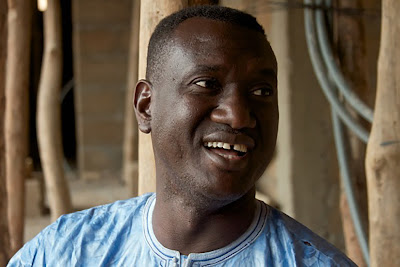 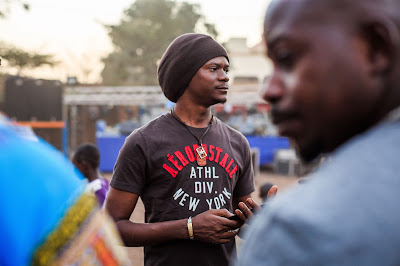 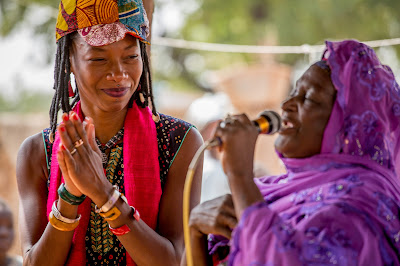 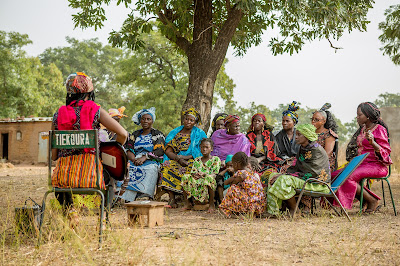 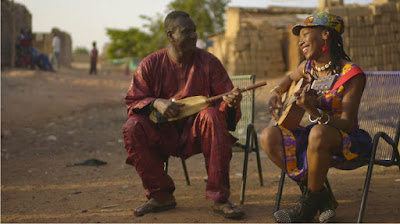 A curiosity of sorts, as it’s a compilation of conversations with several musicians from Mali mixed with concert footage, with a behind-the-scenes backdrop of political upheaval in the northern desert region of Mali where in 2012 an alliance of Tuareg separatists and jihadists from al-Qaeda in the Islamic Maghreb assumed control of the region, implementing their version of Sharian law, and have prohibited dance and forbidden the use of music, eliminating the Festival of the Desert while rounding up and smashing guitars, burning studios, and threatening to kill musicians.  Half a million people, including many performers, fled to the south or to neighboring countries.  A subject touched upon in Abderrahmane Sissako’s earlier film Timbuktu (2014), one of the cities that was overrun by jihadist fanatics, who banned not only the playing but even listening to music.  One of those musicians depicted in the film is basically the star of this film, Fatoumata Diawara, seen here singing in Sissako’s film, TIMBUKTU' - Clip La Musica (2:06), whose colorful outfits and everpresent smile lend a sunny tone to the film, where we hear her say early on, “I can’t imagine a life without music.  It would be like the Earth stopped turning.”  Raised in Mali, but currently living in France, she’s actually better known in Europe, where she was apprehensive about her first solo performance in Mali, as we see her nervously arriving at the Bamako airport, the nation’s southern capital, a city never occupied by the jihadists. The film follows various musicians arriving for the outdoor, open-air, 2015 Niger River Festival in Ségou, an annual 5-day festival of music, attracting an audience of over 35,000 people, suddenly the best place to hear live Malian music.  The stage is actually a floating pontoon sitting just off the banks of the Niger River, where water separates the audience from the musicians, though many hardy souls waded in to dance.  Situated in the heart of West Africa, Mali is one of the poorest countries on earth, but is also the original source of traditional African rhythms transported to America by slaves, giving rise to American blues and jazz.  Music has always been associated with Mali’s cultural identity, where their rich heritage includes Ali Farka Touré, the godfather of desert blues and a superstar on the African continent, along with his son Vieux Farka Touré who has continued his father’s legacy, Fanta Damba, whose career stretched four decades and was primarily responsible for introducing the music of Mali to Europe, Salif Keita, who introduced Afro-pop, usually seen in his colorful African garb, a descendent of Sundiata Keita, one of the founders of the Malian empire in the 13th century, Amadou and Mariam, a husband and wife blind couple specializing in pop fusion, and Oumou Sangaré, perhaps today’s biggest Malian star, a female force popularizing the regional Wassoulou-inflected style practiced by Fatoumata Diawara, who also provided the excruciatingly beautiful music in Sissako’s WAITING FOR HAPPINESS (2002), including what is arguably the most hauntingly beautiful song ever heard, “Djorolen,” Oumou Sangaré - Djorolen - YouTube (8:21).

Upon returning to a beautiful home overlooking the Niger river which cuts through the center of town, with the city of Bamako on the other side, Fatou acknowledges her guitar purchased this house, as she greets other arriving musicians, including Tuareg master guitarist Ahmed Ag Kaedi, leader of the band Amanar, a quietly introspective man who fled the religious persecution in Kidal, part of the northern desert, where extremists burned his home and his guitars before threatening to cut his fingers off.  Now exiled from the desert, he laments being in a big city, with too much pollution, too much noise, and too many people, but it’s no longer safe to return to his hometown.  Accordingly, he sits in open public places dressed in flowing robes and a white turban quietly playing his amplified guitar as people scurry about, moving from place to place around town to practice, with Fatou joining him on a rooftop musical session, both knowing what it is to feel exiled.  Hopping on a bus, Fatou takes off for the southern countryside, returning to her village home near the border of Ivory Coast, where she’s unsure how her family will feel about her, having abruptly left home to avoid a forced marriage, a custom that is part of her Wassoulou culture.  With vendors along the way offering hard-boiled eggs and plastic bags of water, we don’t really get a feel for the passing landscape, as the camera never gets out and explores the territory, missing an opportunity, instead remaining too close to Fatou’s side.  She is openly embraced by the colorfully attired village women, who sit in chairs under a tree and listen to her perform a heartfelt, personalized song “Boloko” pleading to stop the practice of female genital circumcision (“Don’t cut the flower that makes me a woman”), a powerful song directed against a cultural practice in Africa that affects up to 140 million women, including Fatou herself, with 38 out of 54 African states continuing the male-dominated custom, and the subject of an earlier film by Senegalese director Ousmane Sembène, MOOLAADE (2004).  While the shocking practice actually claims the lives of as many as 15% of the young girls, performed by local elders or midwives, often without sterilized medical equipment or even anesthesia, causing infections, infertility, and childbirth complications, a decades-long United Nations campaign against it has done little to stop the practice.  According to a 2014 article from The Guardian (What is female genital mutilation and where does it happen? | Society ...), “In eight countries, almost all young girls are cut.  In Somalia, the prevalence is 98%, in Guinea 96%, in Djibouti 93% and in Egypt, in spite of its partly westernised image, 91%.  In Eritrea and Mali the figure is 89% and a prevalence of 88% was reported in both Sierra Leone and Sudan.”

We are also introduced to Bassékou Kouyaté, who specializes in the ngoni instrument, an ancient traditional lute that he describes as the predecessor to the banjo, though he modernizes the sound, using amplifiers and a wah-wah pedal, allowing him to transform the traditional sound of an acoustic instrument to a powerhouse, near psychedelic electrical force.  Kouyaté and his family are griots, part of an African oral tradition that dates back centuries, a living archive of his people’s customs, masters of the word, responsible for passing down the history of his people, where he toured together with the late Ali Farka Touré, standing out as the only ngoni player.  Because of his distinguished position, he brings both male and female musicians into a mosque, passing through a metal detector, where they are frisked, with uniformed guards present as they meet a Muslim teacher and Imam, first asking permission for the whites to be present to film a documentary.  Asking what Islam has to say about the practice of outlawing music, the Imam claimed the Koran does not forbid music, but he did raise a distinction between different kinds of music, as not all is positive, raising the question of what would be considered culturally destructive or harmful, and who has the power to make that claim.  While Kouyaté was often invited by the nation’s President to play music at state affairs, he envisions himself as a voice of the people, but that honor is likely bestowed upon rap artist Master Soumy, a young rapper in a T-shirt who is the most openly defiant, making angered political statements of social rebellion, claiming that’s the easiest way to promote social change.  Targeting corrupt politicians, he relentlessly attacks the hypocrisy of voices of Islamic intolerance, rallying the audience into a frenzy.

Master Soumy contrasts the protest music of rappers with the more established position of griots, who have been integrated into the culture of Mali for centuries, often singing the praises of rich and powerful patrons, who then shower them with new cars, houses, or airplane tickets, while doing all they can to prevent rappers from performing.  Claiming griots ignore the negative side of society, rappers fill the void by telling the truth, by being the voice of the voiceless.  Disgusted by how easily people sell out for money, rappers are forced to beg for sponsorships, as the Malian record industry has been decimated by piracy.  Still, ignoring the threats leveled against them, which in the volatile political climate of Mali is certainly dangerous, they stand up for what they believe in, suggesting “Rap is music that can change society, that can change mentalities.”  As introductory pieces on the four musicians lead to later concert footage, which feels powerful, but is constantly interrupted with a quick cutting technique, where we only hear fragments, some of which is outstanding, but the film only touches on the surface, never really delving into any prolonged curiosity or discussion, which may leave some viewers infuriated by the choppiness of the editing style, feeling stagnant, with little direction.  Nonetheless, it’s an extraordinary portrait of Fatoumata Diawara, who remains central to the film, and for that footage alone the film is worth seeing.