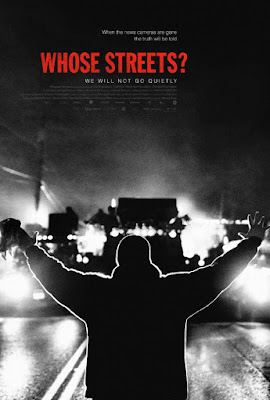 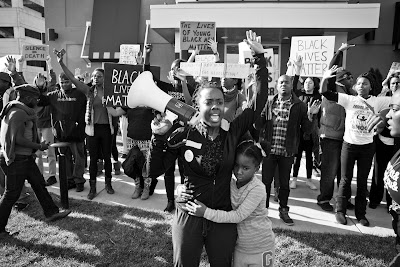 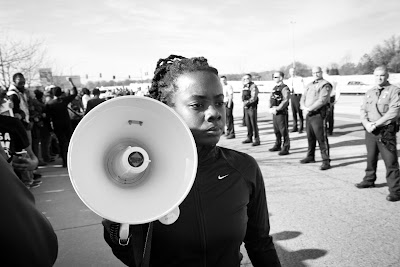 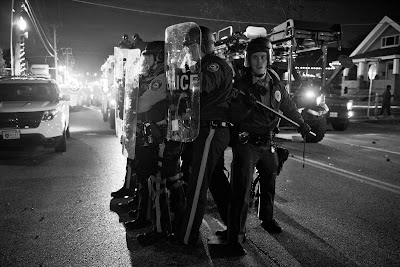 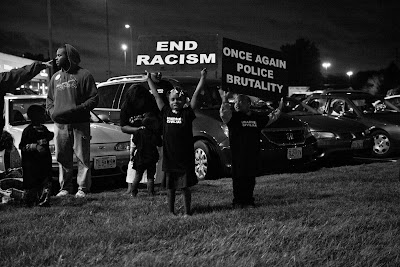 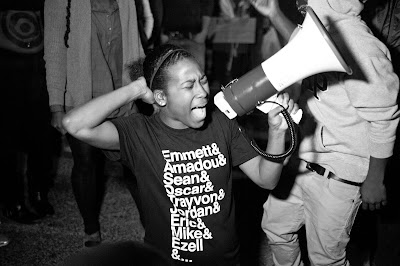 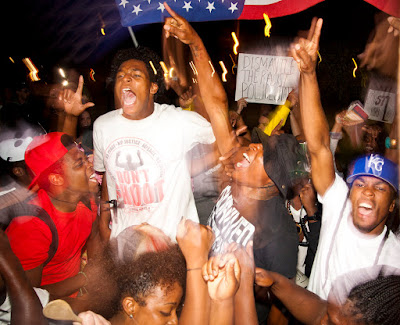 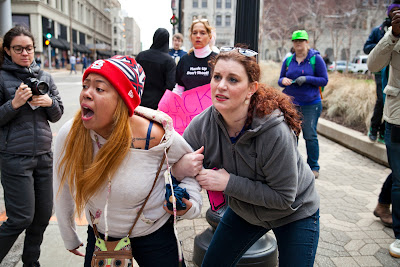 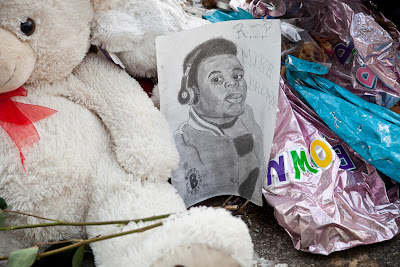 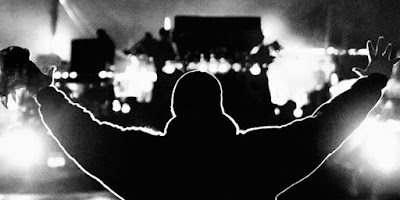 An explosive film that reveals, among other things, that activism is not pretty, or filled with romanticized ideals, but is dedicated and hard corps work that involves confronting constant rejection, continually placing your body in harm’s way, and rarely are you ever allowed to feel the satisfaction of your efforts, as mainstream media minimizes what happened in just a few short seconds, or offers misleading comments and editorials, where much too often it seems like all your efforts are in vain.  Yet that’s just after day one, as the next day you have to get up and do it all over again.  It’s hard to keep the juices flowing and not burn out, as it requires so much energy, as the work continually saps your strength, where you’re on the losing end of most confrontations with police, as they have more brute force, more weaponry, can inflict more serious damage, and the media almost always sides with them, often reporting verbatim what comes from press releases that confirm the police side of the story.  But anyone that’s ever been part of a protest movement knows that’s just the nature of the game, something you must be mindful of, where you can’t let it get you down.  Eternal vigilance is the price of liberty, as democracy must be learned by each new generation.  As Thomas Jefferson once said, “The tree of liberty must be refreshed from time to time with the blood of patriots and tyrants.”  All of which suggests that real democracy is a messy business, where people are liable to be battered and bruised, where it’s easy to get your feelings hurt.  It’s reminiscent of how Tina Turner used to introduce “Proud Mary,” Ike & Tina Turner - Proud Mary - YouTube (6:03), revealing “We never ever do nothin’ nice and easy.”  While the film does have a ragged-around-the-edges feel, which is certainly not conducive to “easy” watching, where this is a film about moral indignation and righteousness and anger, using a scattershot approach that may not be for everyone, as it skips over large chunks of time, but the passion is genuine.

Opening with a quotation from the infamous 1856 Dred Scott Supreme Court decision, a landmark ruling that denied blacks basic human rights, concluding that Americans of African descent, whether free or slave, were not American citizens, instead they were “beings of an inferior order, so far inferior, that they had no rights which the white man was bound to respect.”  As odious as this sounds, this was the law of the land, as it basically divided the country into two halves, one that believed in slavery and one that didn’t, where the case became a lightning rod for sectional bitterness and hostility that was only resolved by war.  More than 150 years later, despite electing our first black President, many institutions, especially the police force, remain thoroughly entrenched with his racially divisive mentality, though refuse to believe it, where this film in particular shows how racism in American society has stayed embedded within our society.  The film provides an on-the-ground view of the Ferguson Uprising, where the fatal shooting of Michael Brown, an unarmed 18-year old black man, by a white policeman sparked an angry response from black residents, especially after leaving his body on the ground for several hours, preventing even his family from coming anywhere near, where hostility was rising almost immediately, eventually met by increased militarization from the police, wearing riot gear during peaceful marches, including leashed dogs, like Alabama and Mississippi in the pre-Civil Rights era, firing rubber bullets and tear gas into the assembled crowds, which only angered them more.  The filmmakers openly side with the marginalized blacks who are protesting against a police cover up, while also pleading to be treated as human beings, basically re-arguing the Dred Scott case, but on the streets of Ferguson.  One of the quotes from Martin Luther King Jr. is especially pertinent, observing that “a riot is the language of the unheard.”  Street protests continued on a daily basis for over two weeks, then started up again when a decision was made whether or not to charge the police officer, where every night the city was transformed into what resembled a war zone, where people were tear gassed even while standing on their own front lawns.

One of the biggest advances in fighting for social justice has been the use of the cell phone camera, allowing average citizens around the world to become film documentarians, much like Haskell Wexler’s brilliant film, Medium Cool (1969), where protesters on the streets of Chicago in 1968 chanted “The whole world is watching” in front of television cameras covering the events, where their actions became front page news.  In this film, the directors use their own footage of marches, looting, and police confrontations, where coverage is mixed with interviews with other activists, local TV news reports, and social media tweets, which include a participating public, with someone chillingly mentioning “I just saw someone die, OMFG.”  Adding to this are frequent characters seen returning to the front lines, including Brittany Farrell, a nursing student and single mom who brings along her 6-year old daughter Kenna.  In a strange twist, after dropping her daughter off at school, we see Brittany get married at City Hall to her activist lover, Alexis Templeton, both of whom place social activism at the top of their agenda, and together they form Millennial Activists United.  David Whitt is a Ferguson resident who lives in the Canfield Green apartments directly across the street from where Michael Brown was gunned down, who indicates the security camera from his building was pointed at the street, but has been mysteriously replaced by a different camera.  Whitt is a constant presence and has taken it upon himself to become a professional observer, joining a national organization called Copwatch, where he uses his camera as a surveillace device to monitor police brutality and document police interactions.  Due to his notoriety, his lease was not renewed and he along with his family were forced to move to a different neighborhood.

Perhaps the spokesperson for the Ferguson Uprising is local hip-hop artist Tef Poe, whose passionate and fiery oratory provides an alternative urban narrative that resonates deeply, questioning where black leaders, and specifically black clergy are during this recent rebellion, as they failed to show up.  Unsurprisingly, no charges are brought against the police officer, which happens so often that it already feels like a throwback to another era, yet it’s a continuation of the present, with a disenchanted crowd once again assembled outside police headquarters.  As we see and hear the chants on the front lines, with placards that read “Don’t Shoot,” keeping their hands up in unison, as Brown allegedly had his hands up when he was shot, perhaps the chant that feels most synonymous with the making of this film is “This is what democracy looks like,” as this film documents what seems like a neverending standoff between police and angered community residents who simply refuse to continue being oppressed.  This hit home with the sole black officer lined up in front of the police station, a young woman in a sea of white cops, who seemed to clearly understand the plea for justice, as this has been a long time coming.  Whatever progress might be made always takes place long afterwards, where there’s never any guarantee something good will come of it.  Parts of the untold story are the effects of repeatedly getting gassed, or being slammed to the ground and arrested, with many individuals losing their jobs or receiving a flood of death threats, where a sad truth, unfortunately, is that Ferguson remains an impoverished and segregated community.  While the film may feel a bit indulgent, like patting themselves on the back, yet withstanding all, Maya Angelou has suggested, “You may encounter many defeats, but you must not be defeated.”  The film is dedicated to Darren Seals, a leading Black Lives Matter activist who was found shot dead in a burning car shortly afterwards, and Josh Williams, a black teen who was sentenced to eight years in prison for admitting to starting a fire inside a Quick Mart during a 2014 protest, acknowledging, however, that the store was completely demolished before he lit the fire.  Just as a note of comparison, a day earlier a retired white St. Louis policeman, Ronald Oldani, age 66, was sentenced to five years in prison for possessing more than 100 computer files containing child pornography.
Posted by Robert Kennedy at 12:01 AM