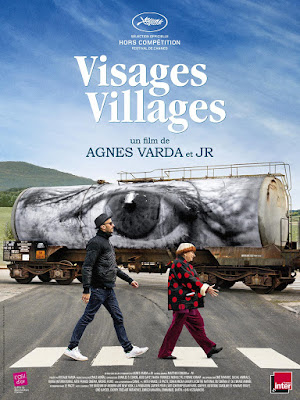 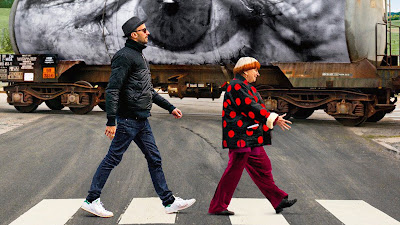 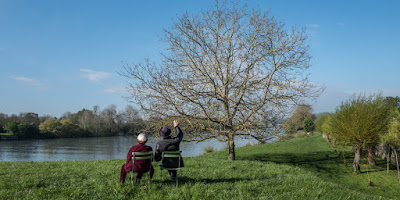 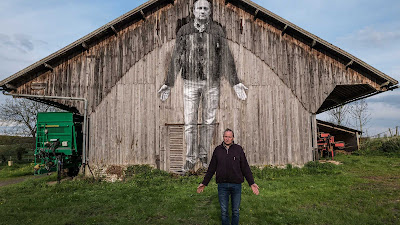 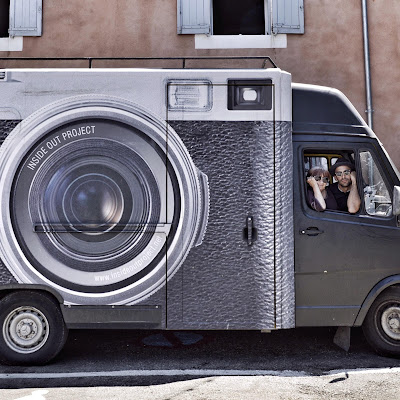 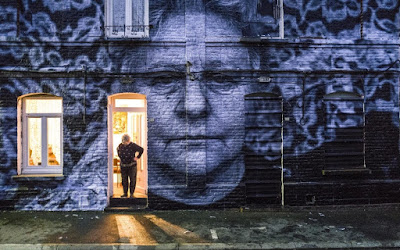 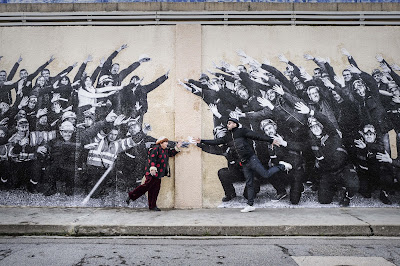 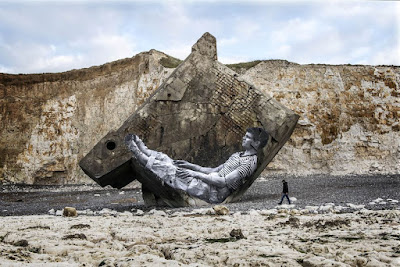 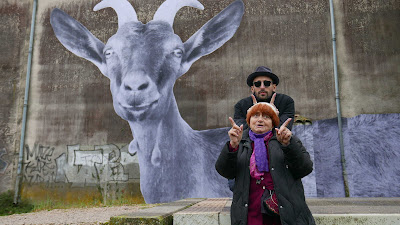 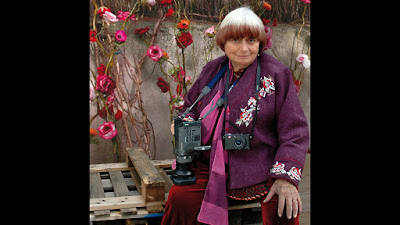 Like the French crowdpleaser AMÉLIE (2001) that warmed the hearts of patrons around the globe, this is a feel-good film exploring how art imitates life, becoming a source of inspiration to local villages visited en route in this quasi road movie where 88-year old filmmaker Agnès Varda and 33-year old photographer and wall muralist JR join forces to scour the countrysides, visiting towns with working class histories, then photographing the locals and enlarging their portraits into giant-size black and white photographs that are then pasted onto the walls of the town, creating a starkly recognizable kind of art instillation that pays tribute to their work.  It’s curious that JR, always seen in dark glasses and wearing the same hat, is the same age as Varda when she shot CLEO FROM 5 TO 7 in 1962, as his youth and energy is regularly contrasted against her deteriorating health, including failing eyesight, constantly teasing her about her diminutive size and her inability to climb up and down the scaffolds used in their work.  While both have backgrounds in photography, what sets them apart in this film is their interaction with local residents, and while no doubt much of it is staged, their encouragement nonetheless feels genuine, something the locals appreciate, as they are being honored in their own communities, bringing pride, but also in some cases a great deal of embarrassment when the enlarged figure is more socially reclusive, where all the attention also brings a certain element of discomfort, yet the artists themselves are motivated by an uplifting spirit of joy, bringing a bit of whimsical happiness into the dreary routines of ordinary lives.  Opening and closing in animated sequences, featuring original music by French musician Matthieu Chedid (stage name –M-), that perfectly matches the overall mood of the film, playful and lighthearted, yet pleasantly upbeat.  After the obligatory meet, where each is introduced to the other, cleverly expressing a variety of ways in which they did “not” meet, an interesting choreography of misdirection, both have a special affection for the other, where Varga recognizes right away that JR has a unique relationship with the elderly, as he’s patient and respectful, always showing respect, something she appreciates and values, so their chemistry throughout the film is sparked by their differences, but also a mutual interest in working together, as what they’re capable of producing is nothing less than remarkable.

As they choose places to visit, they travel in a kind of wayback machine, a vehicle that looks right out of Wim Wenders’ Kings of the Road (Im Lauf der Zeit) Road Trilogy Pt. 3 (1976), yet it houses a photography studio inside as well as a developing machine that generates epic, giant-sized photographs that become eye-popping visual statements, similar to album cover art designs on classic LP records, like the Beatles Sgt. Pepper’s Lonely Hearts Club Band released in 1967, which is designed to capture the imagination.  In this way, the past is integrated into the present, using modernist techniques, which in this case literally alter the French landscape, creating iconic works that people will travel to visit, much like they do works created by landscape sculptor Andy Goldsworthy, the subject of the film RIVERS AND TIDES (2001) (Rivers and Tides), creating monumental works of ephemeral art that exist within the natural world, such as carefully placed rock or leaf formations, capturing a photograph upon completion, though his work will eventually be swept away by the winds of time.  Similarly, Varda and JR contemplate what to do with a giant rock formation lying on the beach, a German machine-gun fortress built on the top of the cliffs during WWII, pushed over the edge half a century ago when it was hanging precipitously over the edge, representing a clear danger to residents, suddenly alone and out of place while standing on edge.  Having to work during low tide, as the ocean would otherwise sweep them away, they produce a moving image on this giant rock, a fleeting memory of Varda working with one of her favorite models earlier in her career, yet it’s all washed away by the thunderous tides by the very next day.  This sense of transience mirrors Varda’s dominating thoughts as she approaches her own mortality, claiming she’s not afraid of death, and even looks forward to it, claiming when the inevitable happens, “That’ll be that.”  Obviously, her approach is far different than JR, who still feels invincible at his young age, as if he’ll never die, leaving his imprint on the landscape wherever he goes, like an urban graffiti artist, something that captured Varda’s eye in the first place, marveling at his quirky inventiveness.  Initially they travel into a mining community, revealing a strip of tenement housing that was formerly utilized by miners and their families, that has been all but abandoned except for one stubborn hold out, paying homage to the profession, where they cover the walls with blown-up vintage photographs of miners from Varda’s collection of old postcards, while also photographing that final resident, blowing it up so it covers the entire wall of her apartment, where she is overcome by emotion when she sees what they’ve produced, never imagining such a thing could ever happen.

As they encounter farmers, waitresses, and factory workers, this becomes a working class travelogue where people are asked to offer their reflections about what they do for a living, with Varda and JR countering their thoughts through a combination of memory and artistic design, as Varda often recalls earlier experiences in some of these towns, where she is reminded of friends that are no longer with us, rummaging through old photographs, where these visits offer a kind of therapy, summoning up ghosts of the past, then re-integrating them onto a modern landscape.  A common element that appears in her films is the everpresent image of cats, like the resurrection of the ghost of Chris Marker, where some of the better shots in the film involve cats that couldn’t look any happier, completely content where they are.  At one farm, there are more than a dozen hovering around the owner as she opens the shutters to feed her bevy of cats at dinnertime, each one more lively and alert than the next, but all exerting a strange and mysterious force.  JR is brilliant in his spatial conception, exerting a quick mind that easily adapts to challenges, while Varda takes her time and ruminates over things, exploring her memory banks, finding common connections, recalling things that are most important to her, where subjectivity is the key to her art, but both, in their own way, leave their imprint.  One of the delights of the film is hearing Agnès Varda sing “Ring My Bell” Anita Ward - Ring My Bell - YouTube (2:40), a disco song from the 70’s, while driving through the French countryside.  While there are a few clips from earlier Varda films, there are not many, as it’s interesting that they choose images that JR recalls.  For Varda, she can’t get it out of her head that this guy never removes his sunglasses, day or night, believing they are a wall that separates them, finding it difficult to get past that.  It reminds her of an earlier short slapstick film she made with filmmaker Jean-Luc Godard in 1961, "Les Fiancés Du Pont Macdonald" short film by Agnès ... - Dailymotion (4:56), which briefly interrupts her feature film, CLEO FROM 5 TO 7 (1962), adding comic levity, eliciting a smile from Cleo, where for her, he took off his everpresent dark glasses and allowed her to film him “exposed,” so to speak, something that obviously means a great deal to her, as it never really happened with anyone else.  Varda gets the idea to go visit Godard at his home, including him in her picture, like bookends at different phases of her life, but when they arrive at his door, they are surprised by the elaborate security measures taken where a locked glass shield prevents them from even ringing the doorbell, finding instead a cryptic message written on the glass window.  On the surface, the message doesn’t appear hurtful, but that’s not the way Varda sees it, as she’s extremely hurt by what she thinks are cruel intentions, perhaps revealing something we’ve always known about Godard, being something of an asshole, but never heard anyone actually say.  This is an emotional haymaker from which the film never recovers, knocking Varda and the viewers off balance, wondering what could possibly be the source of such a disappointment in her eyes, as throughout her career, few are seen as more openly generous than she is, but a charming little animated sequence closes the film with more music by –M-.
Posted by Robert Kennedy at 12:17 AM