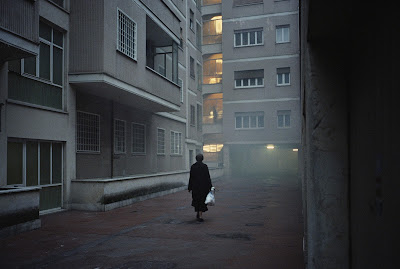 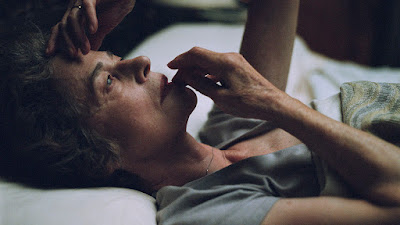 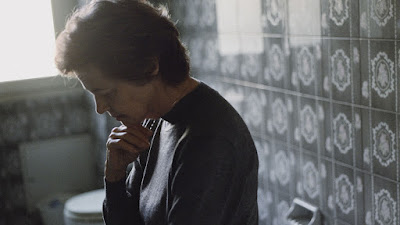 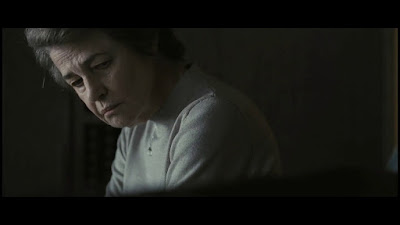 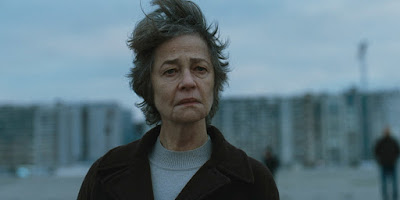 Why do elderly women roles always go to Charlotte Rampling, or Judy Dench if there’s sly humor involved, and perhaps Helen Mirren for a more ballsy performance, but that’s pretty much it.  No one else gets these roles.  Rampling plays it straight, no muss, no fuss, rarely overacting, though this film is the exception, much more overwrought than usual, largely due to the need to fill the empty spaces of an underwritten film, where nearly every shot feels like acting, or overacting, as this film is so slight, narratively speaking, that without a “performance,” there’d be no film.  And therein lies the problem.  It becomes all about a performance, which carries the entire weight of the film.  This kind of thing wins awards and critical acclaim, but unlike in Jeanne Dielman, 23, quai du Commerce,1080 Bruxelles (1976), for instance, who similarly goes through repetitive physical motions, Rampling’s actions feel much more forced and mechanically driven than natural, where she’s constantly putting on a show.  Some may love this kind of character building in a stage performance, but in a film, where Rampling dominates nearly every shot, it’s all too much for such an underwhelming film, as it feels totally out of balance, never hiding its downward spiral, as things go from awful to even worse, a wretchedly miserablist film with no in-between.  Not only is this difficult to endure, witnessing the shunning of a single character due to no fault of her own, but there is added guilt by association, as she’s blamed for her husband’s crimes, which are apparently too heinous to mention, as no one will even broach the subject.  In this way, it bears a close resemblance to particular scenes from Todd Field’s LITTLE CHILDREN (2006), particularly the entire town’s snubbing of the Jackie Earle Haley character, though Field clearly establishes the root of the crime, which is pedophilia.  It may be the same here, though it’s never mentioned, where the young Italian writer/director is simply not talented enough yet to get away with this kind of bare-bones outline of a story, requiring the work of a heralded actress to carry the brunt of the labor.  If this seems coldly calculated, that’s the way it feels.

This is an exceedingly dark film, spending nearly all its time in the shadows of the living, though it opens oddly with screams and yells, as actors, Rampling among them, are warming up their vocal chords, rehearsing their craft, but it sounds more like they’re attempting to imitate mating calls of exotic birds, with each sound weirder than the next.  “Acting” seems to be what this film is about, as Rampling spends the entire film pretending all is well when this obviously is not the case, but in order to get along without alarming anyone, she prefers to keep that matter to herself.  Mum’s the word, so to speak, as a good three-quarters of this film is wordless, where viewers watch Rampling go about her business, walking endlessly, riding public transportation, busses and trains, working as a cleaning lady in an upscale home of a wealthy mother, taking delight in the small moments she can spend with her boss’s young son, who happens to be blind, a hammy metaphor for the only one who cannot see what the trouble is.  Viewers get a glimpse, however, without it ever being spelled out, as after a final meal where next to nothing is said, Rampling accompanies her husband to prison, but only she returns home.  Sadly, the cocker spaniel dog waits by the door for her master to return, only to pine away, growing depressed, refusing to eat in his absence.  That’s the kind of film this is – even the dog gets depressed.  From that point on, the film couldn’t be more downbeat.  All that we’re missing is a torrent of rain, with dark clouds hovering over her every move, making her even more miserable.  It’s clear right away where this film is going, and it simply never gets any better, with overly transparent intentions.  Working on dual tracks, where she finds herself all alone, without a friend in the world, yet there is another track of societal rejection that is even more punishing.

While the film follows her ordinary routines, one wonders if Rampling really needed to do nude scenes.  While there’s nothing remotely wrong with showing the human anatomy, in this case it appears completely unnecessary, as she’s essentially naked already, walking around the city completely exposed, where her dour mood detaches and disassociates herself from the world around her, including the bustling street life or the youthful kids surrounding her when taking public transportation, or running up the stairs in her building, all avoiding her as if she’s got the plague.  She makes no attempt to communicate with others, but simply keeps to herself, where her life plods on, becoming pure drudgery.  Not sure, then, why we need to spend so much time with her, as we get the point, but is that all there is?  And the answer is no, as there’s more to the downward spiral, as her family has to reject her as well, and not just in any ordinary fashion, but with a display of cruelty that couldn’t be uglier, literally banishing her from her grandson’s birthday party for some crime that will remain unmentioned.  With that, she breaks down in a public lavatory, finding it overwhelming and too much to take, but we get the idea.  After that she goes swimming at a health center, only to discover they’ve revoked her privileges, that she’s no longer welcome there any more.  It’s here that the director creates a scene for Rampling to walk down a set of stairs, which leads to more descending stairs, until it feels like she’s finally reached the bottom of the world.  One wonders if she’s contemplating throwing herself in front of a subway train, as the finality keeps moving in that direction.  Despite the minimalist structure, creating enormous space for Ms. Rampling to fill, the downbeat tone is simply too heavy-handed, where audiences reach a saturation point, with thoughts moving “away” from the screen, wandering somewhere else entirely, even while watching this film.  It felt like a wasted opportunity, as Rampling deserved better, but this storyline of slowly starving herself to death, emotionally, mirroring what transpired with the dog, is simply too pathetic.  Unfortunately, this misery porn is among the worst film experiences of the year.
Posted by Robert Kennedy at 12:03 AM