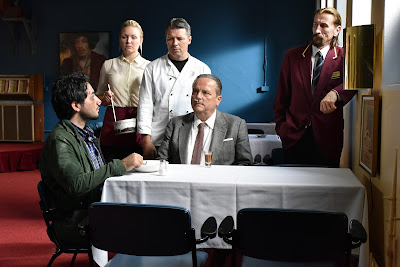 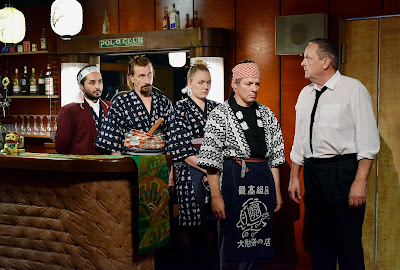 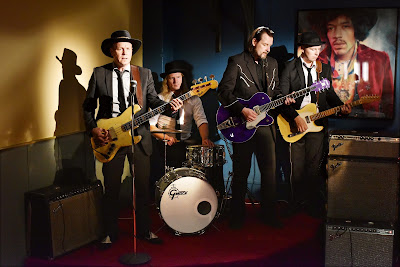 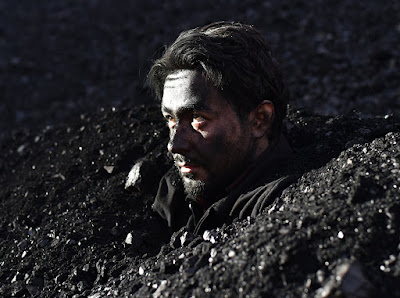 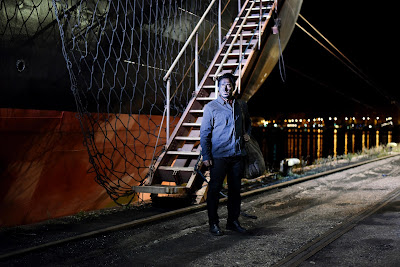 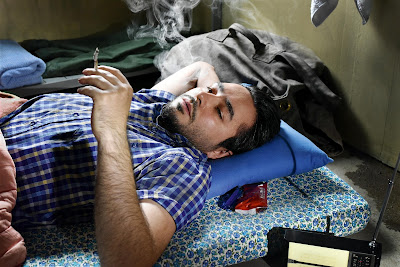 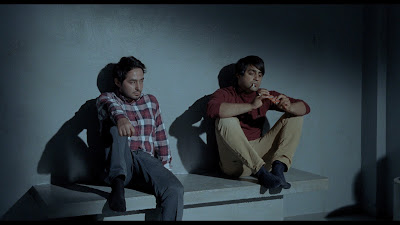 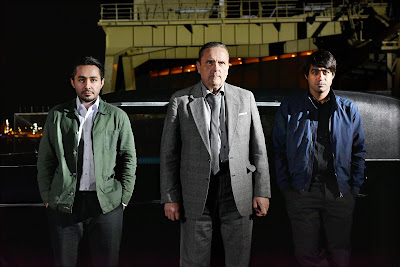 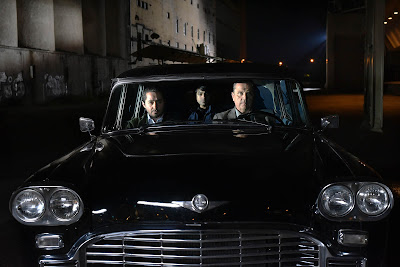 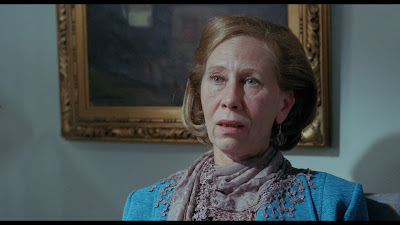 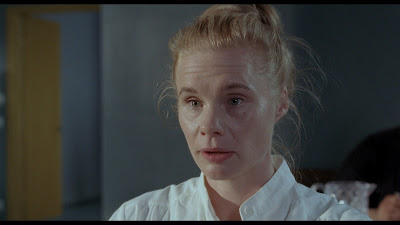 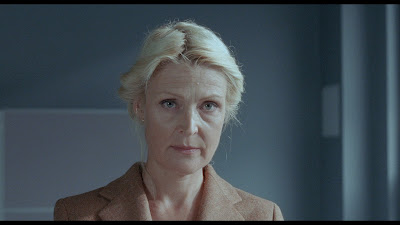 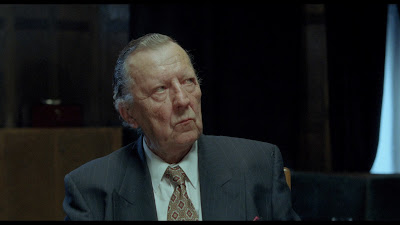 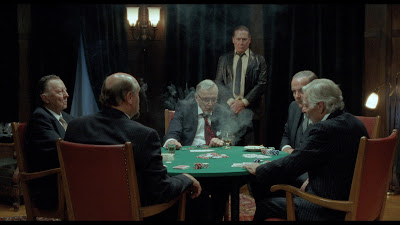 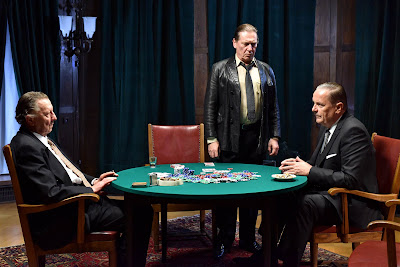 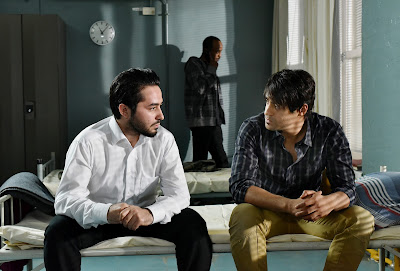 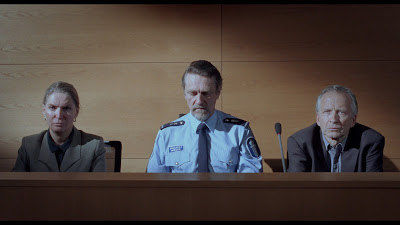 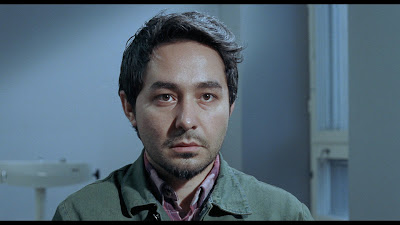 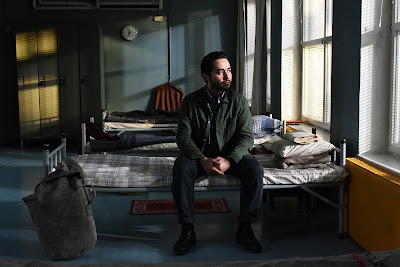 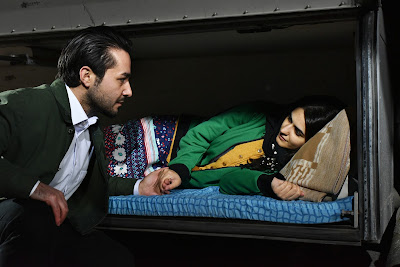 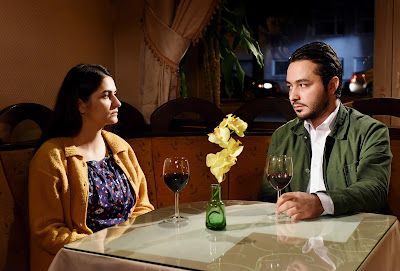 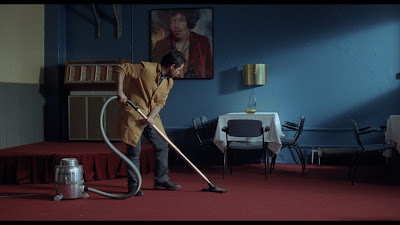 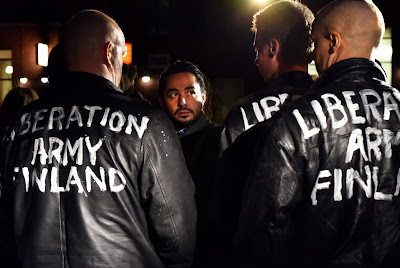 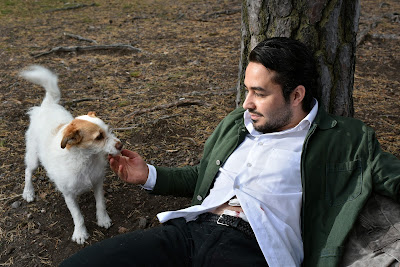 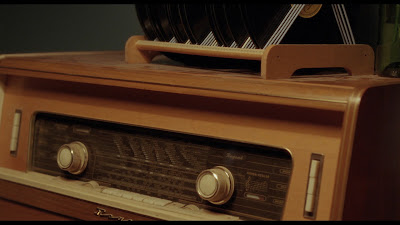 Kaurismäki’s first film in half a dozen years is a follow-up to Le Havre (2011), a major port city in northern France where the Seine River meets the English Channel, and the first film in his projected Harbor Trilogy.  This new film, winning the Silver Bear at the Berlin Film Festival for Best Director, takes place in Helsinki, Kaurismäki’s normal stomping grounds, as evidenced by his earlier film Lights in the Dusk (Laitakaupungin Valot) (2006), a brilliant comment on Finnish miserablism and gloom, accentuating the absurdity of the authoritative no man’s land the Soviets left behind, where the city resembles an industrial wasteland.  A dog bearing the same name appears in each film, suggesting a kind of continuity.  In this trilogy, Kaurismäki imagines the bleak fate that awaits those refugees arriving with the hope for a better life, where the Finnish title is better translated as “Beyond Hope,” which better fits the acerbic tone of the film.  While undoubtedly a comedy, finding humor in the depiction of a perpetual state of mind of Finnish miserablism, Kaurismäki has found the perfect antidote in Keatonesque deadpan humor, which is so overly exaggerated that it’s hard not to smile, with characters that couldn’t be more endearing to the audience, feeling like ordinary folks, the kinds of people you’d like to go out and have a drink with afterwards, just to see a more jubilant side of them that’s never presented onscreen, as they are often used like mannequins in beautifully set-up tableaux shots.  Even the opening credit for Kaurismäki's production company Sputnik is funny, as it’s a throwback to another age, while the opening sequence taking place in the dark of night in a shipping harbor turns out to be a sight gag, yet it introduces us to a man without a country, Khaled (Sherwan Haji), an undocumented Syrian refugee who has lost his entire family, with the exception of a sister that he’s lost track of, in a bomb blast that levelled his family home in Aleppo with his family in it.  When a human face emerges from the darkness, he is covered from head to toe in the black soot from a pile of coal that kept him hidden, shaking himself off, like a dog stepping out of water, and simply walking into a new world.  The next sequence is utterly hilarious, entirely wordless, with a woman in curlers sitting at a table smoking a cigarette with a bottle of vodka and a glass sitting on the table, while her husband, evidently, hands her his house keys while also removing his wedding ring and placing that on the table, as the two take one long last look at one another before he steps out the door with his packed bag.  She throws the keys and the ring in the ashtray and pours herself another drink.  No one does scenes like this as well as this director, as he squeezes every last ounce of emotion out of it as a rock ‘n’ roll musical soundtrack takes over, where it may as well be an opening shoot-out in a western where only one of them rides off into the sunset.  In this case, that would be Wikström (Sakari Kuosmanen), a middle-aged Finnish shirt salesman whose vintage classic car has a trunk filled with perfectly packaged brand new shirts.  Think of this man as the Finnish Willy Loman from Arthur Miller’s play Death of a Salesman, a traveling salesman that lives on the road, yet has no children to speak of, only a dead-end life that offers him little comfort.

Selling his entire inventory to an interested customer, Wikström abandons his former life for something entirely new, finding his way into a high stakes poker game and betting it all, where he inconceivably walks out a winner, paying cash to invest in a reputable restaurant with already established employees, becoming the boss overnight, but the place is little more than a dive, certainly less than advertised, where his staff hadn’t been paid in the last three months by their former boss, last seen quickly heading for the airport.  While heavily stylized, the beauty of the film is how it’s filled with black market profiteers just trying to make a buck on the side, as there’s apparently no conventional way to make a living, so they have to get creative.  To this end, a rock ‘n’ roll band plays throughout in different settings, from a lone guitarist playing on the street to club settings in dive bars playing before an audience, but in each case the grim lyrics couldn’t be more dire, including a drunkard singing about his anticipated demise, as if death is his only friend left in the world.  With a kind of raw, rockabilly sound, juxtaposed against a giant painting of Jimi Hendrix on the restaurant wall, these songs are extremely effective, like a singing Greek chorus, as they express the tragic themes taking place in the film, offering a bleak and fatalistic narrative throughout.  Khaled on the other hand, couldn’t be more sincere, as he truly believes the world is not a cruel and indifferent place, turning himself in to the cops while claiming refugee status in Finland, where he is photographed and fingerprinted, with one telling him “Welcome, you are not the first,” while the other types out height and weight on an old ancient typewriter, suggesting not just primitive but archaic methods.  Sent to a welcoming center with other refugees, they await formal hearings to decide their fates, each commiserating with the other, where they have little to do other than smoke cigarettes and stare out into the night.  Borrowing a cellphone from one of the residents, there is no word from his sister, causing him considerable anxiety, as these men have little left to connect to, as everything in their lives has been taken away, no home, no country, and no family.  Despite the everpresent humor, there is a tragic undertone of suffering throughout, where the downbeat Finns and the outcast refugees seeking asylum seem to have much in common, as their plights are similar, surrounded by bleak and penniless lives, each striving to hold onto what’s left of their humanity.  Enter the Liberation Army of Finland, a neo-Nazi motorcycle gang, thugs in black leather jackets targeting immigrants with racist taunts, starting fights over nothing, battering them with kicks and fists, while enjoying pounding heads onto concrete.  This kind of derelict element terrorizes the defenseless, hoping to drive them out of the country, all in the name of patriotism.  They seem to follow Khaled wherever he goes, turning up unexpectedly.  In one instance, cripples and street bums rise up to his defense, thwarting an attack by driving the gang away, suggesting a solidarity among the lowest class, which may, in its own way, offer a thin strand of hope.

Khaled’s immigration hearing is a farce, with the sovereign state of Finland declaring conditions in Aleppo are not serious enough to obtain refugee status, becoming mired in a Kafkaesque delusion, blind to the conditions that actually do exist, simply ignoring them for their own convenience, as otherwise they’d actually be called upon to offer help, preferring to remain callously indifferent.  Ordered out of the country the following morning, he watches a televised newscast of the continual bombings in Aleppo, including targeted hospitals, pulling dead children out of the rubble, where it’s hard to believe Europe would collectively start closing their borders.  Khaled defies the deportation order and sneaks away, finding himself battered and bruised, hiding near the restaurant dumpsters, where it’s inevitable that these two narratives would eventually intersect, with Wikström inviting him in for a meal, offering him what little help he can offer, which includes a place to sleep in a storage area of a parking garage.  The restaurant itself goes through several transformations, serving perhaps the most revolting food in cinema history, as they try a sushi concept, but herring is apparently the only fish on hand, or an Indian restaurant named after Gandhi, but meatballs and sardines out of a can is about all the cook can offer, where beer is their biggest seller, with the hired staff eventually wondering why they even offer food at all.  Despite the tragic circumstances affecting refugees in Europe, this is one of the few films that dares to humanize their character, making them part of the story, but the systemized rejection is appalling, forcing them to wander the ends of the earth without a home, where they are treated as criminals.  Kaurismäki bridges the gap with a cute and adorable dog, the kind that will befriend anyone that treats it nice, which seems to be basic animal behavior, yet somewhere along the line, warped by hatred and self-interest, humans lost their ability to reach out and help others in need.  Even in this film, it’s only Khaled, who is nearly destitute himself, that offers a few coins for the beggars on the street, while the rest of the population simply ignores them, where they may as well be invisible, as if they’re not even there.  The cast of characters throughout are typically standouts, initially aloof and stand-offish, yet feeling like long-lost friends after awhile, where they simply walk to the beat of a different drum, yet there’s a warmhearted affection on display, even as they attempt to con the new boss into giving them advance pay, where he himself doesn’t want to be a bad guy.  After all, from the outset, Wikström is a guy who is defined by not having a friend in the world, where he’s all alone, embarking on a new adventure, where this eccentric staff is his real family.  There’s a telling scene where some young computer experts, just teenagers really, have their own electronic fingerprint machine and can actually produce phony identity cards within minutes, literally blowing the minds of the old guard, who wouldn’t have a clue how to pull that off.  This kind of home-grown tenderness gives the film needed warmth, while adding depth to the characters, as all are profoundly alone trying to make their way through this world, each finding their own path.  While one wants to like this film more, as it has plenty of heart, yet it’s not the most profound film, but Kaurismäki demonstrates such a terrific attitude about life in general, where his greatest trait is a tolerance for others who are different or unconventional, accepting all known hipsters, misfits, and con artists as members of his universal family.
Posted by Robert Kennedy at 12:54 AM