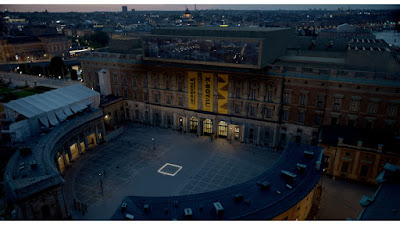 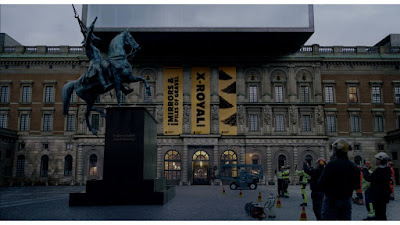 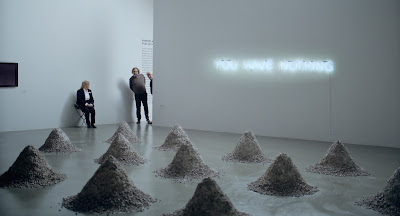 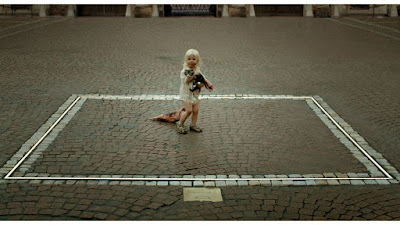 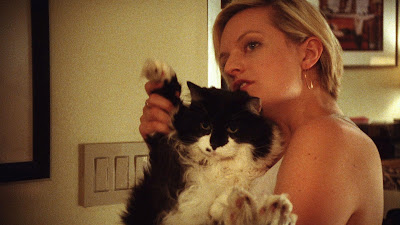 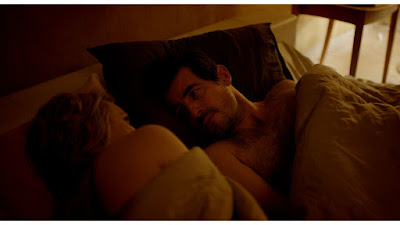 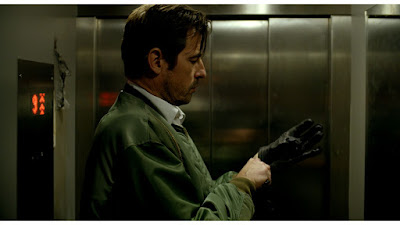 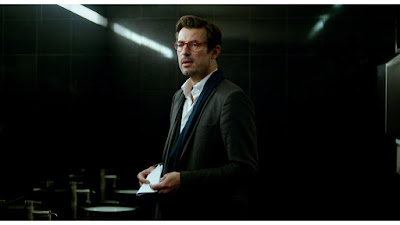 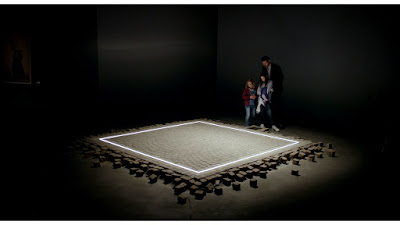 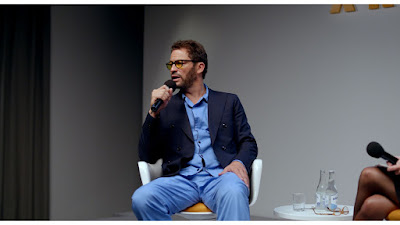 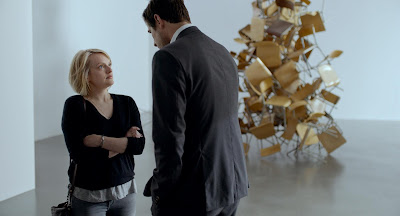 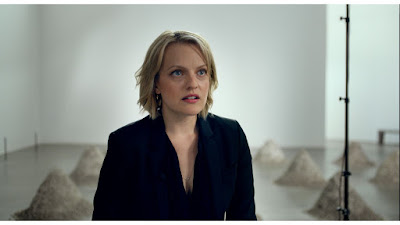 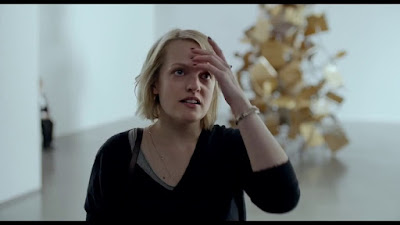 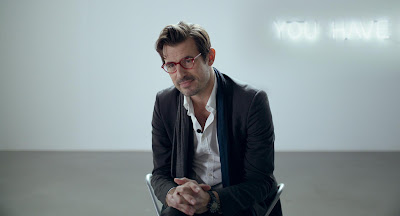 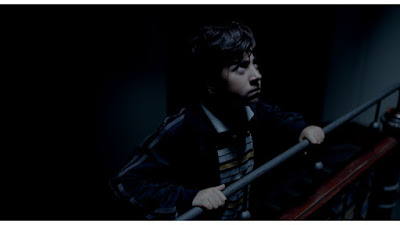 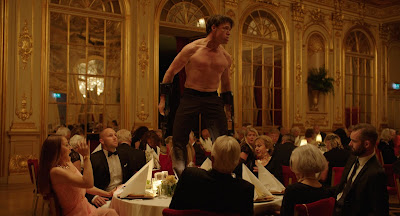 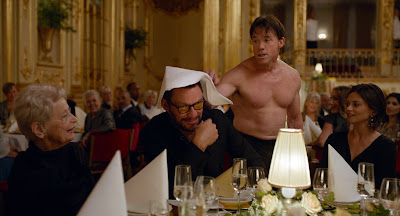 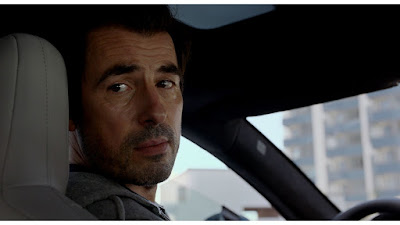 How much inhumanity does it take before we access your humanity?
—Marketing slogan showing a child being blown to smithereens while in “The Square” for an upcoming art exhibit

Ruben Östlund has an extremely provocative style of satirical filmmaking, bordering on cruel, that is not for everyone, known as an overcontrolling director specializing in what might be described as a theater of discomfort, where he’s intentionally creating cringe-inducing set-ups that will make viewers squirm.  While in his earlier films, Play (2011) and Force Majeure (Turist) (2014), he is very adept in tapping into humiliating personal circumstances, enlarging them into a broader societal context, actually making an incisive social comment about how easily we misjudge the world around us, which might look a little differently when seen in this light.  With THE SQUARE, however, all bets are off, as he takes aim at the wealthy, specifically how privilege allows them to live in an artificial bubble of the culturally elite, completely protected from the outside world, living by values they pretend to believe in, but completely abandon when threatened or when the moment suits them, becoming not an indictment of those values, but their misappropriation by the privileged and powerful in a Western society that depends upon them.  The film centers on Christian (Claes Bang), an erudite and educated man of manners who is the chief curator of a modern art museum, Stockholm’s X-Royal Museum, while also divorced, a devoted father of two daughters, living in an upscale apartment, driving an environment-friendly electric car, and a supporter of liberal causes.  While you’d think he’s in an enviable position, wielding power and influence, through a series of unfortunate incidents, for which he has no one but himself to blame, he is reduced to a cowardly mush before the film is through, exposed as a total hypocrite in every respect, thinking he’s the smartest man in the room and can weasel his way out of tight jams due to his privileged status as a man of letters, but ends up thoroughly disgraced.  With a screenplay written by the director himself, the film moves from one outrageous set piece to the next, bordering on the surreal, clearly crossing the line of bad taste, growing deliriously out of control in a grotesque spectacle by the end, revealing a darker underside of the human condition, suggesting complacency leads to an overall cowardice in Western democratic societies to actually stand up for what’s right, forcing others to fight your battles for you.  Christian is in the middle of it all, thinking he is above the fray, yet is powerless to exert his so-called influence when it matters, losing all perspective of what it means to be a decent and respectable citizen.

At issue is one of the museum’s upcoming installations known as “The Square,” which is simply a small designated space in front of the museum which is continually lit up and marked off as a safe zone.  Along with the artist’s name, an inscription around it reads, “The Square is a sanctuary of trust and caring. Within it, we all share equal rights and obligations.”  While this kind of hollow manifesto rings false, as it’s largely meaningless, yet the museum is forced to promote it like it would any other exhibit, requiring resources and ingenuity, hiring a team of young media experts to find the best way to draw in an interested public.  Mirroring this exhibit is one already taking up an entire room in the museum, with the constant presence of a lone security guard hovering nearby, comprised of small pyramid-like piles of gravel.  The irony of that exhibit is that people tend to peep around the corner to have a look, but inevitably walk away without so much as a visit, as it simply doesn’t catch their eye.  What makes this a truly modern era movie, however, is the promotion campaign thinks the bigger the better, as the exhibit will draw more attention that way.  But this covers up the soulless superficiality of modern existence, where opinion polls define the issues, and instead of a well-written article enhancing interest, word gets spread through social media, reducing analytic thought to a herd mentality of what’s currently liked on Facebook, where people respond to other like-minded views, never really challenging themselves, but simply agreeing with others that agree with them.  This comfortable aloofness may reflect an inherent emptiness at the heart of modern sensibility, defined by a short attention span, and a detached inability to capture one’s interest unless something goes viral on the Internet, which for many constitutes approval, as without that brief flair of artificially generated interest, no one would be paying attention.  If much of this feels like an advertising technique, it is.  Much of the film is told with that in mind, filled with an obsession with performance art that is littered throughout the film, actually becoming one giant spectacle of performance art, using cinema as the provocation.

Winner of the prestigious Palme d’Or (First prize) at Cannes, which is certainly an honor, but it seems like a make-up call for not awarding Maren Ade’s Toni Erdmann (2016) the year before, an equally cringeworthy effort, a dazzling choreography of awkward and uncomfortable moments, reaching unseen heights of comic farce and outrageous spectacle, the likes of which we haven’t seen in decades, which left the festival emptyhanded.  While decidedly unfair, the world works like this.  Away from the spectacle that is Cannes, however, this film may not play so well, though much of it is hilariously funny, well written and acted, and the director exerts his usual mastery behind the camera, but the ostentatiousness of the director is a bit like the Wizard in THE WIZARD OF OZ (1939), who presents himself as all-powerful, but is little more than a middle-aged man behind a curtain pulling the levers, where the derisive tone may leave many viewers thinking the joke is on them, as if the director on high is making fun of the little people below, where viewers are reduced to peons that can be easily controlled and manipulated.  This ultimately takes the fun out of the picture, where many viewers may find this smug and overly pretentious, perhaps even cruel.  The problem is the uncomfortable feel of emotional manipulation, as viewers become rats in a cage, a behavior experiment taking place in the lab intending to provoke a reaction, using crass, mass-market advertisement techniques that amount to bullying, feeling similarly manipulative and emotionally contrived, using his characters (and the audience as well) as a punching bag, sending wave after wave of what amounts to the most humiliating and degrading situations possible, and then asking everyone what they would do under similar circumstances?  This actually feels more like a game than a film, like Haneke’s Funny Games (1997), where the director already knows the answers, or has some preconceived idea, but pushes the buttons beyond any point of social acceptability, like being subjected to electric shock treatments, each one a bigger jolt than the last, which actually changes the rules of the game, as the director wants his audience to suffer uncontrollably, like wetting one’s pants, and only then will he feel satisfied.  If people reject his idea, as they refuse to play along, claiming free will, he’ll simply call them part of the status quo, claiming we’re all numbed into complacency, suggesting we need to wake up.  Occasionally this method works, just not when it’s so overly contrived and obvious, as it feels like the director is pulling the strings, and we’re being used as his puppets.  He’s actually cramming it down the audience’s throat, premiering at Cannes with an elite, upper echelon patron audience comprised very much like the invited-guests-only awards gala dinner depicted in the film, where they apparently ate it up.  Audiences apparently love to see themselves depicted onscreen.  As it turns out, often the film that screams the loudest is the only one heard.
Posted by Robert Kennedy at 12:21 AM