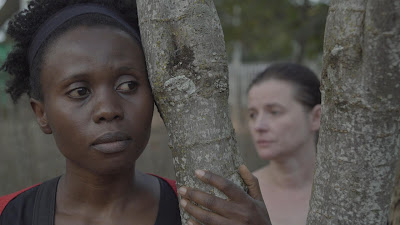 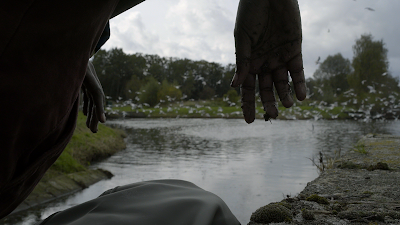 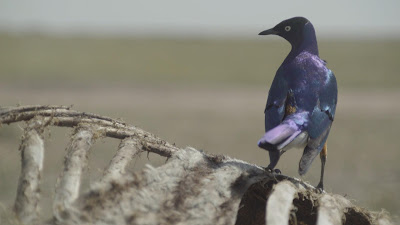 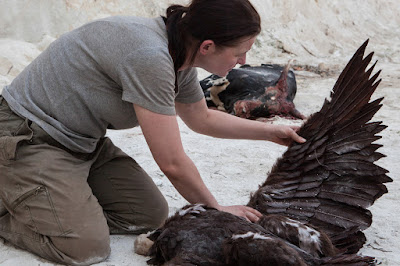 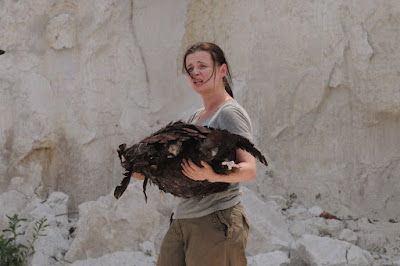 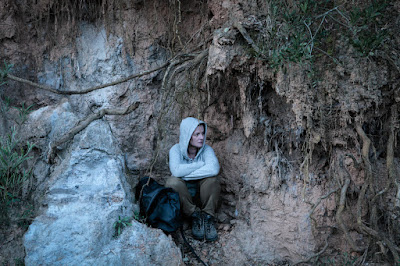 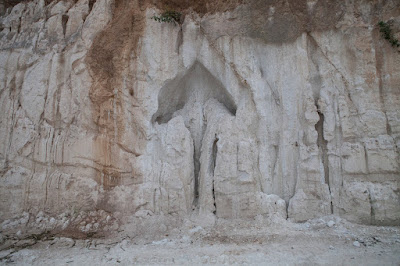 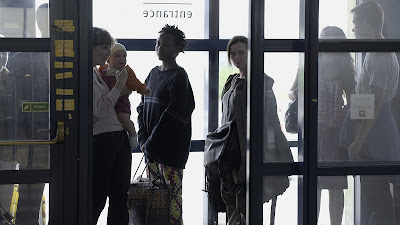 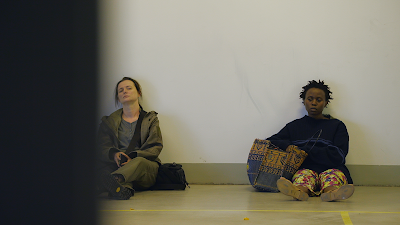 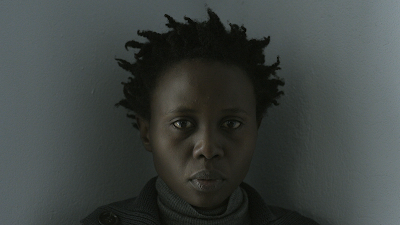 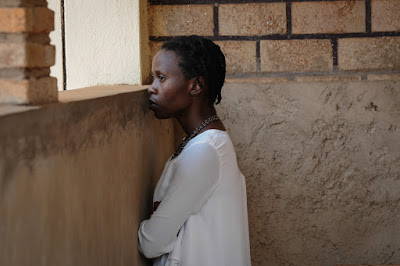 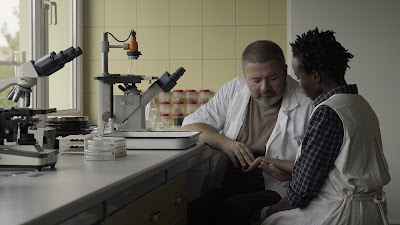 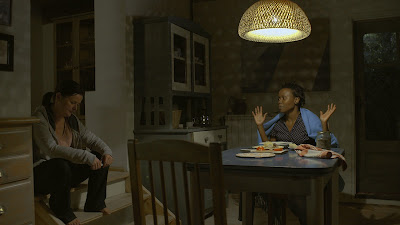 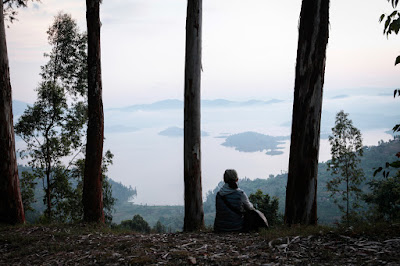 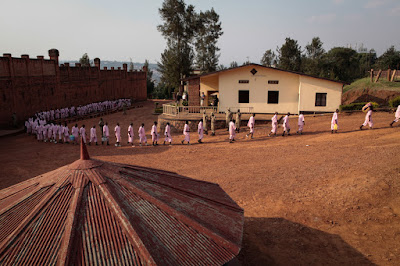 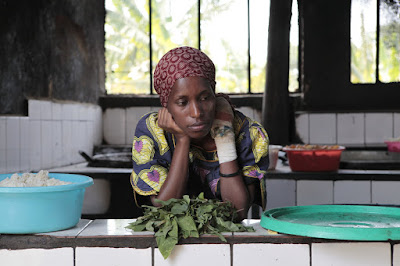 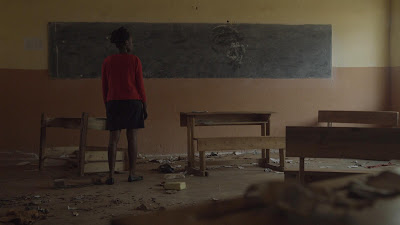 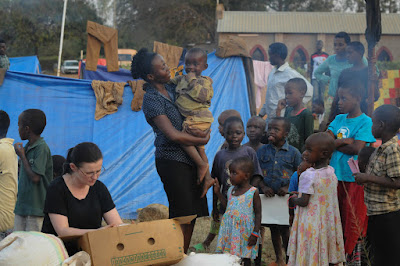 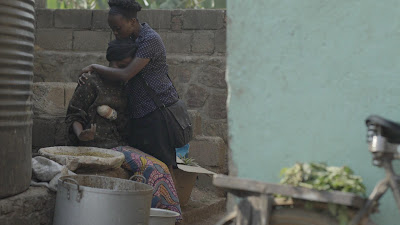 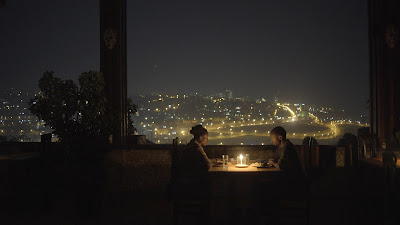 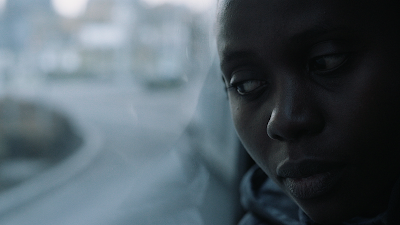 BIRDS ARE SINGING IN KIGALI (Ptaki śpiewaja w Kigali)                  B+
Poland  (113 mi)  2017  d:  Joanna Kos-Krauze           co-director:  Krzysztof Krauze
We come from a land where the Holocaust occurred. The consequences of genocide in Poland can be felt even today. It is simply our duty to revisit, in every generation, the fundamental questions of how it could have happened and how to live after the genocide. That is why it is so important to preserve the memory and the realization of where the cycle of violence begins. In the history of civilization genocide has never been a spontaneous act. It is something for which societies have to be prepped. The prepping usually begins with words.

We spent several years in Africa. The first time we went over we had no idea we would go on to spend the most difficult years there – the years of illness, departure, mourning, but also hope. We lived in South Africa the longest. Krzysztof spent his time in cancer treatment, but we also worked, closely watching the society which was so different from our own – scarred by the legacy of apartheid, unimaginable violence, racial tensions, shocking economical differences – yet, at the same time, much more tolerant than ours in many respects. Rwanda was initially a traumatic experience; I spent many weeks there attending exhumations and memorial sites. Everyone has their own story there. Everyone is either a victim or a killer there, or a killer’s descendant. It is all very complicated. All those emotions have not cooled there yet. It is still an experience of collective trauma, and going through it is a task for many generations. Journeys like that one of ours really make you re-evaluate everything.
We knew that those years of our experience would sooner or later find their reflection in film.

Originally the project of Polish director Krzysztof Krauze, whose film MY NIKIFOR (2004) won the Chicago Film Festival Gold Hugo 1st Prize for best film that year, but he unexpectedly died from cancer in 2014, leaving his wife to complete the film.  Not just the director, but cinematographer Krzysztof Ptak also died while shooting.  While one could complain about the extended wildlife sequences of vultures feeding on a dead animal, with certain alpha-birds exerting dominance over others, this is a distinctly gruesome metaphor for the horrific Rwanda genocide in 1994, the largest since WWII, where over the course of 100 days nearly one million Rwandans, mostly of Tutsi origin, were slaughtered on the spot by the empowered Hutus, all killed by hand, largely using machetes, claiming the use of a bullet was a wasted bullet on a Tutsi “cockroach.”  While there are surprisingly few films that seriously address this subject, up until now the best has probably been Raoul Peck’s SOMETIMES IN APRIL (2005), a made-for-TV film that returned to Rwanda for the shoot, casting villagers who endured the massacre, recreating what actually happened where it happened, offering a kind of healing catharsis a decade later.  Again recreating the horror of the times, this film relives the panic and confusion over the mass exodus of two million people seeking asylum elsewhere, who had to face roadblocks and mass rapes just to escape, leaving those that managed to survive severely scarred and traumatized, and while they were the fortunate ones, many became ghosts of their former selves, retreating into a psychologically damaged, personal hell.  The film follows two companions, Anna (Jowita Budnik), a Polish ornithologist studying vultures in Rwanda as part of her scientific research, and Claudine (Eliane Umehire), a young Tutsi woman who flees her home town and escapes.  Anna was living in the home of Claudine’s father, working together as he was a specialist in the field, but forced to witness his humiliating execution prior to her escape.  Both women return to Poland and attempt to maintain some semblance of normalcy, yet their sanity is challenged hourly and daily, exhibiting abrupt mood swings, little patience, and a quick condemnation of others, as reintegrating into society has its difficulties, with both encountering roadblocks.  In addition, the film does not shy away from the racist views of intolerance in her own country, as black African refugees living in Poland are unwelcome over time and urged to return back to their homeland.

The film is not without moments of humor, where the foreign language tape used by Claudine to learn the Polish language is infuriatingly ridiculous, recreating absurdly superficial conversations that make little sense, bordering on the ludicrous.  Perhaps the one moment that suggests this isn’t any ordinary film comes when Anna is interviewed about Claudine at the Polish consulate, where they are not just bureaucratically indifferent but blind to the repugnant historical realities leading to an asylum request, where she’s asked if she knows what might have caused such an outbreak.  “The war?  It happened because of little white dicks like yours, only those happened to be educated at the Sorbonne.”  Her testy attitude is key to understanding the film, as she’s exceedingly bright, but blunt, showing no patience for clueless nitwits.  Nonetheless, over time, things at least improve, even the way they dress, taking greater care of themselves.  When a letter arrives indicating one of Claudine’s relatives is alive and living in a refugee camp, she is compelled to return, but is informed by returning to Rwanda she would lose her refugee status, as there is no longer any threat of danger, and could only travel freely as a citizen, a process that takes years.  In order to expedite the procedure, out of desperation Anna sells her father’s research photos to another scientist, in hopes of both preserving her father’s memory as well as helping accommodate Claudine, as she is issued a passport before their joint departure back to Rwanda, where the bustling street scenes in Africa couldn’t be more starkly different, literally packed with people selling anything they can get their hands on for money.  As Anna visits memorial sites honoring the dead in Rwanda, one immediately recognizes the connection between Poland and Rwanda, as Poland is the site of Auschwitz and other extermination camps, and make no mistake about it, this is a Holocaust film.  The similarity is striking, as they are eerily familiar, where it’s here the film takes on deeper meaning, as it is somber and quietly respectful.  Beautifully directed throughout, though with a few excessively graphic animal/organ images, the film has an arthouse sensibility, which suggests it’s never rushed, pays attention to minor details, and offers deeply humanist performances by both women.

While the film explores the lingering impact of trauma in our lives, we also see the upcoming, next generation in Rwanda, deterred from achieving their full potential, spending their childhoods in refugee camps, many of them orphans, singled out by their ethnic heritage, the result of neighbors turning against neighbors, deluded by power, inflicting rape and slaughter on their parents, where it is estimated that between 250,000 and 500,000 women were raped, eliminating the very concept of family bonds.  Upon her return, Claudine notices how grimly silent everything is, as the birds are gone, where human events have literally altered the course of nature.  When Claudine finds her cousin, she is so profoundly traumatized that she adamantly wants to be left alone, mutilated on one side of her head, where she simply doesn’t feel like part of the human race.  This sense of alienation is unlike anything most of us can imagine, where it can takes years to rediscover any hint of humanity, yet we are acutely aware of how refugees are greeted by the tone-deaf, nationalistic world of today, closing their borders, turning a blind eye, often attacked and treated with xenophobic hatred and contempt, as if “they” are the problem.  Restoring any equilibrium in their lives requires time and patience, with as few confrontations as possible, as there is no medicine that can treat what ails refugees, with one character claiming “hatred is incurable.”  Avoiding cliché’s and sentimentality, this intensely intimate film keeps a minimalist distance, mostly telling the story through the evocative power of images, where viewers can observe for themselves what to make of the impact.  Often at odds with each other, these two women represent what friendship is about, offering help when you can.  When Claudine unexpectedly discovers another living relative, their greeting is like meeting a creature from another planet, as it feels so unbelievable, like it could never happen, where both remain hesitant, simply staring intently, taking it all in, before finally embracing.  It’s a powerful moment, one that sticks with you afterwards, as it expresses total disbelief.  Wanting to find her family’s remains and offer them a proper burial proves impossible, as bodies were literally bulldozed into mass graves, where one character says, “This land will not be at peace for hundreds of years.”  This film is a mournful meditation of the inexpressible, exploring the extremes of emotions, never really understanding, groping to discover how much has been lost, finding instead an emptiness in ourselves, a hole that will never heal.
Posted by Robert Kennedy at 12:01 AM