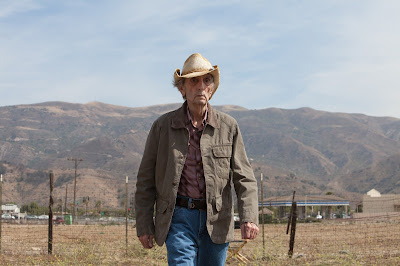 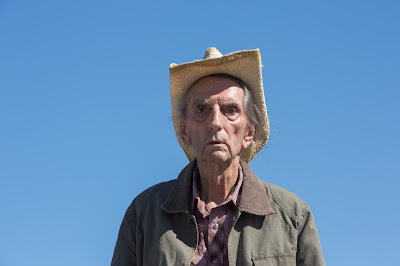 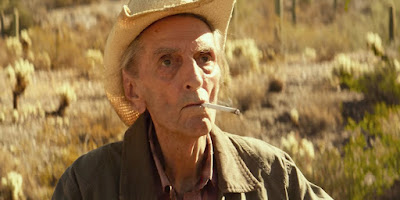 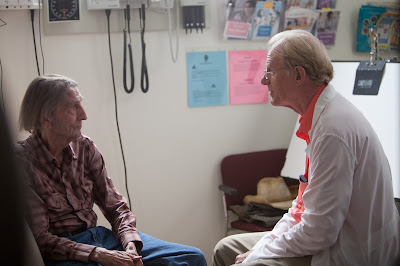 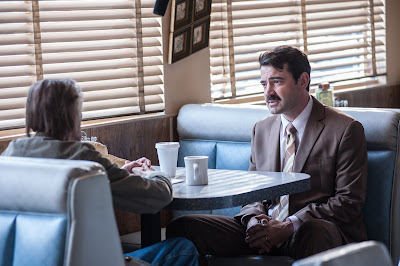 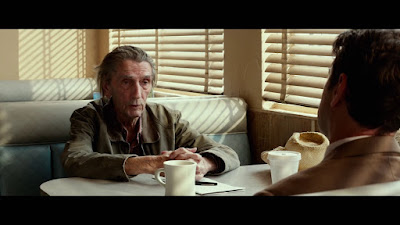 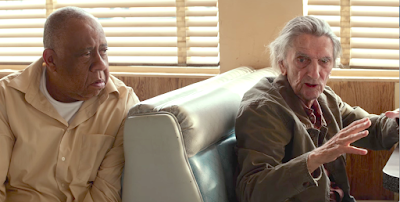 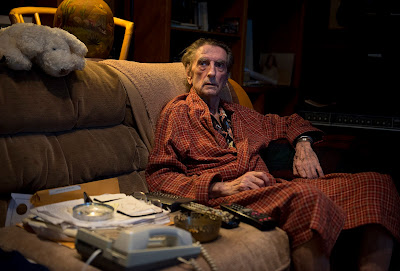 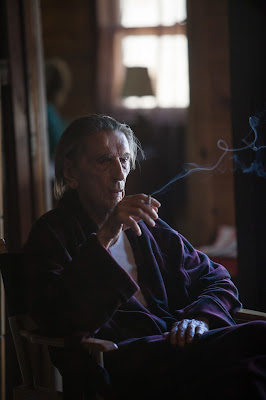 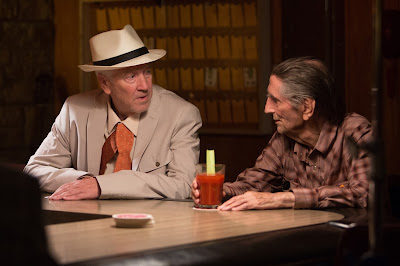 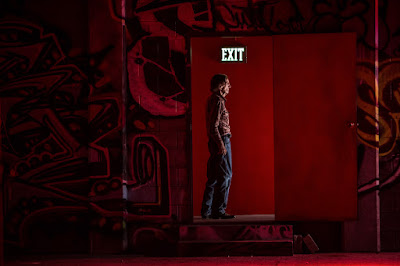 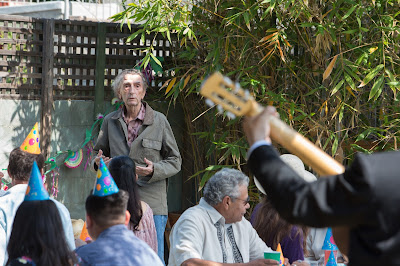 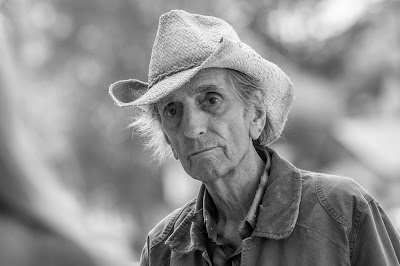 Well, I gotta go, my shows are on.
—Lucky (Harry Dean Stanton)

A slow and meandering tale about the journey of life, as seen through the eyes of an aging character who has been fortunate to remain healthy through his waning years, none other than 90-year old actor Harry Dean Stanton, someone known affectionately as Lucky throughout the small Southwestern town he lives in, where it follows in the footsteps of other outstanding films on the subject, namely David Lynch’s Disney film THE STRAIGHT STORY (1999), starring 79-year old Richard Farnsworth in his final role, with Harry Dean Stanton making an appearance at the end of that film which couldn’t be more appropriate.  Amusingly, David Lynch makes an appearance here as a man suffering from the profound effects of losing his best friend, a 100-year old tortoise that goes by the name of President Roosevelt who makes an escape through an open gate and scoots away, adding a touch of personal intimacy throughout, the kind of characterization that defines the film.  Much of it emblematic of Stanton’s own life, Lucky is seen doing crossword puzzles, watching old game shows on TV, while exhibiting a passion for singing Mexican songs, yet what’s most poignant is the actor’s own death coming just weeks prior to the release of the film, making this a stunning final farewell, becoming the centerpiece of his own film, where he is viewed as a national treasure, with the camera following his every move.  With nearly two-hundred credits in a career spanning six decades, Stanton was a regular on various westerns on TV in the late 50’s and 60’s, was the best man at Jack Nicholson’s wedding in 1962, and even lived together for more than two years after his divorce, while also singing “Danny Boy” at the funeral of Hunter S. Thompson.  Working with eclectic directors from Monte Hellman in Two-Lane Blacktop (1971), Sam Peckinpah in Pat Garrett & Billy the Kid (1973), Ridley Scott in Alien (1979), and John Carpenter in Escape from New York (1981), always playing a character actor in secondary roles, Stanton is among the best to ever do it, where his big breakthrough came with Wim Wenders strange American odyssey film, Paris, Texas (1984), with Stanton finally playing a starring role, a psychologically damaged character who was mostly silent, but whose stunning monologue near the end is a thing of legends, written by Sam Shepard, backtracking through the most painful moments of his life in dreamlike flashback sequences, actually improved upon in Robert Altman’s Fool for Love (1985), another Shepard effort, where Stanton’s profound eloquence speaking over the flashbacks is simply mind-altering.  To his credit, Stanton has become an endearing character on the American cinematic landscape playing primarily isolated or lonesome characters, building his reputation as something of an outcast or an outlaw, a man on the fringe of society who always speaks his mind, uncensored, yet inevitably ends up alone, having spent a lifetime accumulating memories filled with regrets.  According to Shepard, Stanton didn’t really have to act in order to tell a story, reminding us “His face is the story.”

While David Lynch has developed a particular fondness for casting Stanton, appearing in several shorts, four of his feature films, while also featuring him in five episodes of his revamped television series of Twin Peaks (2017), where he is seen here singing “Red River Valley,” Harry Dean Stanton - Red River Valley - YouTube (1:09), this same tune becomes the predominate theme with Stanton on the harmonica playing throughout this new film, where we watch him follow his daily routine, waking up, turning on a Spanish music radio station, washing his face and armpits, brushing his teeth, combing his hair, lighting a cigarette, doing morning yoga exercises in his underwear between puffs, drinking the only thing he has in his refrigerator, a chilled, already poured glass of milk, with several cartons lined up to be next, before finally selecting what he’s going to wear.  As he walks out the door to face a new day, it looks pretty much like every other day, where his established routines define his life.  Heading for the local diner, he orders coffee and works the local newspaper crossword puzzle, frequently asking customers for assistance, where he’s well looked after by the cook, Barry Shabaka Henley, the bartender playing a similar role in Jarmusch’s Paterson (2016), while a doting waitress, Yvonne Huff as Loretta, takes a personal interest, treating him as if he’s family, expressing one of the joys of small towns, where people tend to look after one another.  Afterwards, he heads around the corner to a local market, buying cigarettes and his carton of milk from the Mexican proprietor (Bertila Damas), exchanging pleasantries in a combination of English and Spanish before disappearing back home to watch his quiz shows.  Each evening, he drinks Bloody Mary’s at the local bar, owned and operated by Elaine (Beth Grant) and her husband Paulie (James Darren), often meeting his best friend Howard (David Lynch), commiserating over his missing tortoise, who happens to be Howard’s best friend.  This little touch offers a glimpse into the lives of the elderly, or just lonely people, as often the only friend they have in the world is their pet, heaping all their social skills onto that one animal, not knowing what to do with themselves when the animal is gone.  Howard is particularly effected, making what might be the most heartfelt defense of his missing friend during an anguished moment of exposed vulnerability, yet it’s especially affecting, small and tender, the kind of moment you’ll only find in a film like this, Lucky clip - Gone  (2:29).  It’s always fun to share moments with film directors “in front of” the camera, as it feels like a rare privilege.

About as intimate as you can get, there are deafening silences in this film, small and large, but there’s also an understated humanness in every sequence, including Ed Begley Jr. as his physician, where Lucky visits him in his office after suffering an inexplicable fall, indicating the tests reveal no lingering issues, who simply has no medical answers for how one man can smoke nearly every day of his life and his lungs are completely clear, reporting Lucky is amazingly healthy for a man of his age, informing him, “You know most people don’t get to where you are, they never get to the moment you’re in right now, where you have the ability to witness what you’re going through and clearly examine it.”  One of the sweeter moments is a visit from Loretta, who simply stops by one day unannounced, checking up on him, catching him in an awkward moment watering his plants in his underwear.  With no ulterior motive other than pure friendship, they sit down and share a joint together while watching Liberace on TV, an entertainer so flamboyantly different he may as well be from outer space, yet it leads to a stunning personal confession, revealing for perhaps the first time in his entire life that “I’m scared,” a universal truth when it comes to aging.  Tom Skerritt shows up in the diner one morning wearing a Marine insignia on his cap, drawing the interest of Lucky, who was in the Navy, as the two rehash old war stories about World War II, but certainly not the kind we’re used to hearing.  While there are moments between moments that are filled only by the presence and personality of Stanton, who easily fills the screen with his monumentally recognizable face, there are a few stand-out moments, one of which is a lengthy scene simply watching Lucky at home alone smoking a cigarette as we hear the somber tones of Johnny Cash calling out to us from the grave, Johnny Cash - I See A Darkness. - YouTube (3:42), a particularly haunting song that sends chills up the spine contemplating one’s own mortality.  Lucky is extremely aware he’s closer to the end, but that doesn’t seem to bother him, instead he shares what little wisdom he has with others while remaining true to himself, laughing in the face of the void, even offering a singular moment when that look is directly at the camera, a cinematic tribute to none other than Giulietta Masina who does the same near the end of Fellini’s THE NIGHTS OF CABIRIA (1957), easily one of her most poignant moments.  But perhaps the scene of the film belongs to Stanton, invited to a young boy’s birthday party, “Juan Wayne,” the son of the grocery lady, where they have food, flan, a piñata, and even a mariachi band, when suddenly out of nowhere Lucky breaks into a traditional mariachi song, “Volver, volver,” dramatically singing in what appears to be perfect Spanish, Exclusive Lucky Clip “Mariachi” - Harry Dean Stanton - YouTube (1:19), surprising everyone, including those in the audience, providing a kind of effortless poetry that is a beautiful tribute to his memory.

As a kind of bonus video from an earlier documentary, HARRY DEAN STANTON: PARTLY FICTION (2012), Actor Harry Dean Stanton sings (Bonus video) | Kentucky Muse | KET ... YouTube (4:10), Stanton can be seen joyously singing more songs in his living room with Michelle Phillips of The Mamas and the Papas.
Posted by Robert Kennedy at 12:00 AM