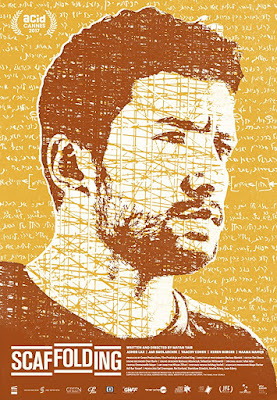 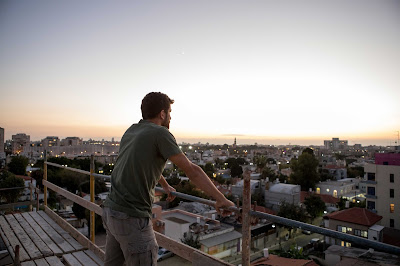 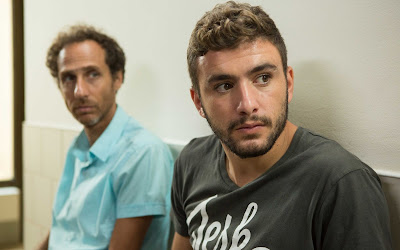 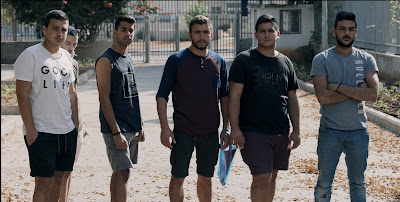 A film that explores a different aspect of Jewish life in Israel, namely a working underclass.  Within that background, the film takes us into a remedial educational high school class where we find 17-year old Asher (Asher Lux) in a literature class with other kids with behavior issues, most of whom joke that they can barely read.  Without ever specifying a medical diagnosis, Asher likely has attention deficit disorder (ADD) issues, where he impulsively blurts out questions without waiting to be called, often viewed as a classroom disturbance, as he has what are called temperament issues, while he’s also prone to violence, but that’s another issue.  The film is directed by Matan Yair, who’s also a novelist, having spent nearly ten years teaching a literature class, where Asher is a non-professional actor who was chosen from his classroom, who’s onscreen nearly the entire film, becoming an extremely compelling character study due to his inherent authenticity, which is really the centerpiece of the film.  Shot on a $400,000 budget, the film is interestingly a joint Israeli and Polish production, using a Polish cinematographer, Bartosz Bieniek, which offers a more expressive look to the film, moving from close-ups and handheld camerawork to recurring outdoor shots of Asher working on a building scaffold at all hours of the day with other laborers, as he’s being groomed to inherit his father’s scaffolding business.  The director’s use of time gaps and jump cuts often feel jarring to viewers, using abrasive moments to emulate the often unpredictable behavior of the central character.  Only one other film like this comes to mind, Sam Fleischner’s Stand Clear of the Closing Doors (2013), which uses an autistic actor in a film that accentuates the heightened sensory aspects of his personality disorder — a really beautiful film, by the way.  But if Asher is a compelling character, so too is his teacher, Rami (Ami Smolarchik), who projects an intelligent calm throughout all the interruptions, showing infinite patience, asking provocative questions, and always having the student’s best interests in mind, knowing they may never advance to college, that this may be the last time most will ever have any contact with poems, short stories, or great literature.

Surprisingly, Asher’s father, Milo (Yaacov Cohen), shows little interest in his son continuing his education, finding it a waste of time, as instead he’s grooming him to take over the family business and has him regularly working on the scaffolds, believing hard labor is what’s good for him, as it saps his aggression and helps stabilize his behavior issues, though he’s concerned about Asher’s ability to manage other employees, many of whom tend to be older immigrants with complicated backgrounds.  Milo is an ex-con who wants his son to stay out of trouble even after he’s gone, thinking work is the best medicine.  There is no mention of a mother, with women almost entirely absent from his life, surrounding himself exclusively with male friends, like fellow laborers or teammates on the soccer field, where women are typically depicted through negative stereotypes and derogatory language.  So this is largely an examination of male behavior through a prism of a learning disability, where Rami becomes an alternate father figure, offering contradictory views from his own father, suggesting there are other options besides the family business, where education has its advantages, as it builds a healthier society.  But Asher is like a bull in a China shop, belligerent and continually exhibiting inappropriate behavior, where in the eyes of others he’s a troublemaker.  But Rami sees him as an earnest and sincere kid, easily sidetracked and losing concentration, no doubt, but with constant guidance he accepts instructions, as he’s willing to learn.  In class, few do any homework or take actual interest in the material, as they quickly lose focus and go off on tangents, but Rami patiently reels them back in, reading the material himself to make sure they’re acquainted with the classics, where the teacher feels it’s his obligation to help them navigate their way through the material.  It doesn’t always work, but sometimes it does, like Asher walking up to him in the hallways afterwards and urgently recalling one of the lessons.

By chance, Asher overhears Rami ask another class to think of questions they might want to ask their fathers but never would, and write them down for class the next day, which prompts Asher to write his own questions for his overly stern father that he dutifully gives to his teacher.  What’s most intriguing about Asher is there is no filter, as he simply blurts out what’s on his mind, wearing his heart on his sleeve, making it clear what he’s thinking, as he’s totally transparent, with no secrets or ulterior motives.  Rami sees the goodness in this kid, and continually helps steer him on the right path, helping him pass one of his oral final examinations by being flexible enough to ask the same question in another way, as what he was interested in was knowing whether or not he knew the correct answer.  Always told in a naturalistic light, the contrast between father figures is intriguing, as both want what’s best for him, but they pursue it by taking such different paths.  His father grows ill, needing to have an operation, while Rami has his own personal issues that dramatically alter the narrative path of the film in a spellbinding sequence of its own, leaving Asher stranded, as if on an island, at least temporarily, perhaps for the first time in his life, having to navigate his own way through the final exams.  Other teachers are not as helpful as Rami, remaining rigidly authoritative, offering no guidance whatsoever, allowing him simply to sink or swim on his own, where he’s more inclined to fail.  Asher brings a tightly wound intensity to the role, where his confrontational manner, however, feels intimidating to other teachers and administrators, where misbehaving is part of his personality, often veering out of control, where there’s a thin line that separates him from criminal behavior, at times crossing it, as he has no internal mechanism to stop him from going there.  Nonetheless, this film offers extraordinary scrutiny into the examination of a male psyche that is damaged, viewed as throwaway goods, representing a near invisible underclass that is marginalized, suddenly thrust into the mainstream, fully integrated into the fabric of society.
Posted by Robert Kennedy at 12:01 AM