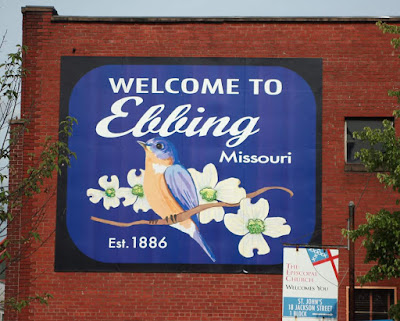 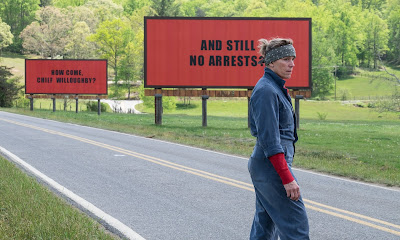 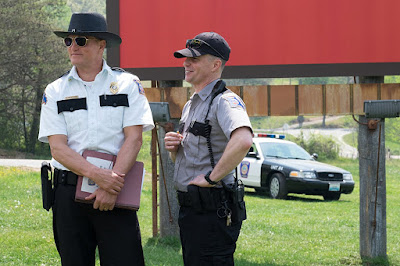 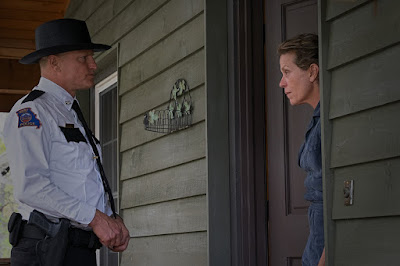 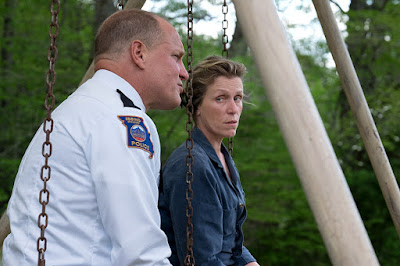 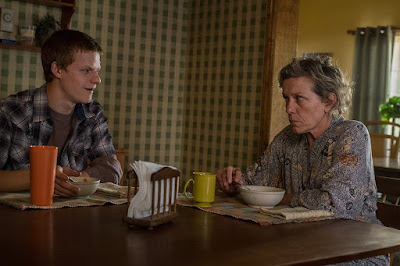 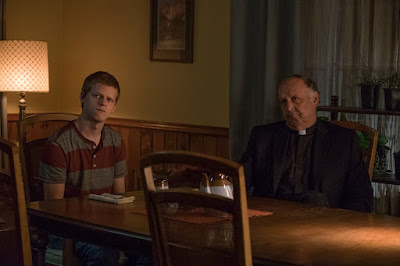 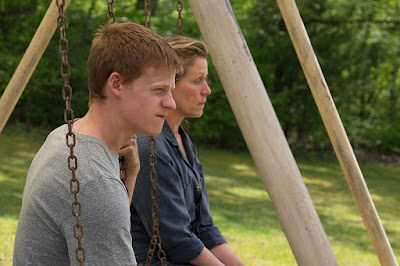 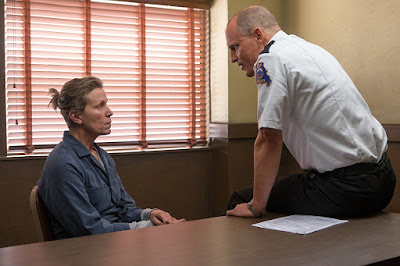 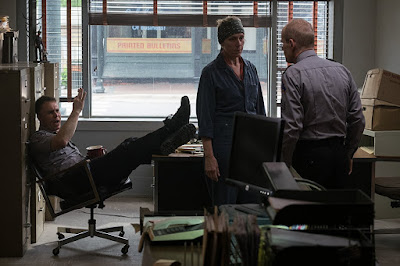 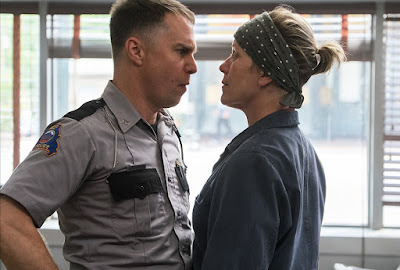 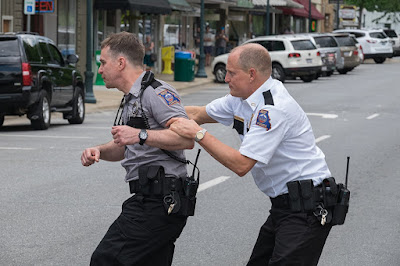 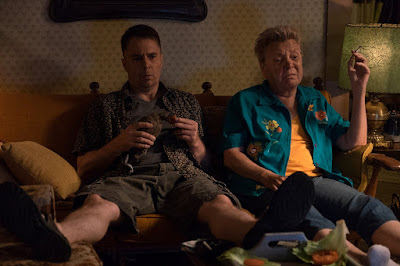 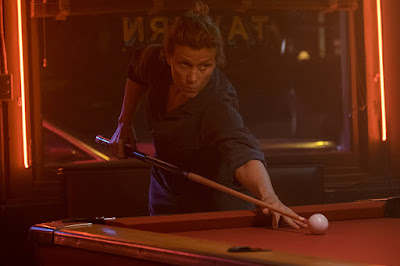 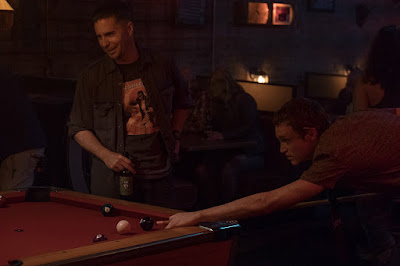 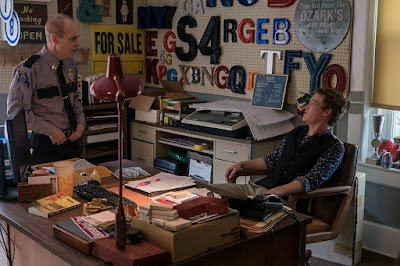 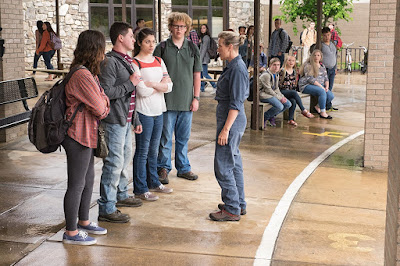 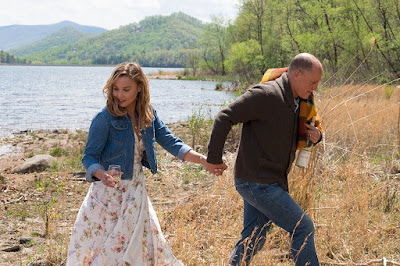 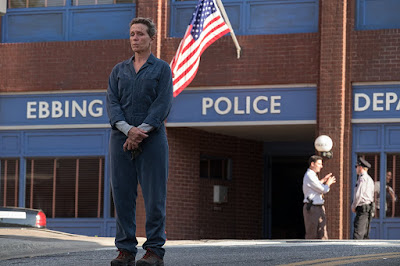 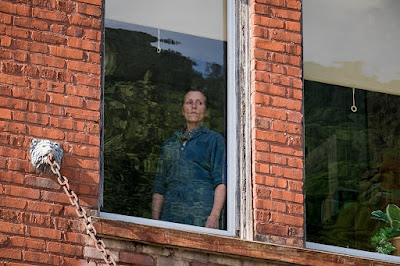 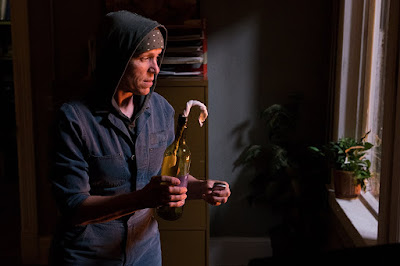 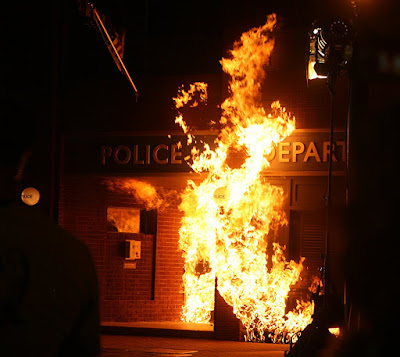 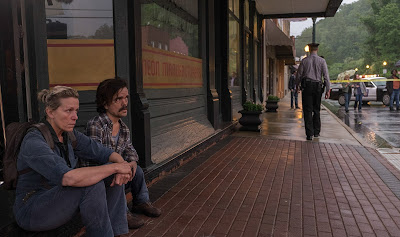 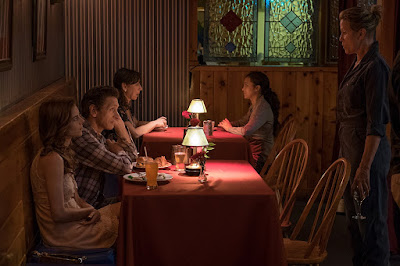 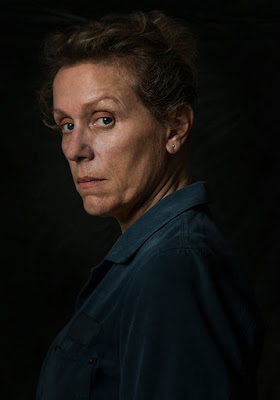 Irish playwright Martin McDonagh broke onto the scene with the hilariously inventive In Bruges (2008), an absurd comic drama filled with repulsive dwarf jokes, ridiculous race humor, and a flurry of ethnic slurs, where the marvelously inventive dialogue is so brilliantly written that it serves as a catharsis for all modern ills.  His follow up Seven Psychopaths (2012), while thoroughly enjoyable, seemed to run off the rails, finding itself getting continually sidetracked.  In addition to movies, however, McDonagh has written four other Tony nominated plays, The Beauty Queen of Leenane (1998), The Lonesome West (1999), The Pillowman (2005), and The Lieutenant of Irishmore (2006), where he along with older brother John Michael McDonagh, The Guard (2011) and Calvary (2014), have demonstrated a niche for a scathingly incendiary, free-wheeling writing style that has all the makings of some of the best writing found anywhere in the world today.  And wherever you find writing of this caliber, unmatched, high quality performances are bound to follow.  Enter Frances McDormand, whose riveting work with the Coen brothers in Blood Simple (1984) and Fargo (1996) have elevated her into actress royalty, where this film only confirms her status as one of America’s greatest actresses.  Written with her in mind, McDormand epitomizes an actress fully inhabiting her role, always playing fiercely independent, no-nonsense characters, where in this film, she’s tough enough to stand up to any man, and then proceeds to do so throughout the film, showing uncommon fortitude, which eventually grates on those closest to her, feeling like they already have enough of a load to carry.  As Mildred Hayes, a single mother raising two high school age kids in a tiny rural setting in Missouri not far from the Ozarks (though actually shot in the mountainous hills of North Carolina), whose ex-husband Charlie (John Hawkes) ran off with a lame-brained 19-year old who’s closer to a daughter than a girlfriend, making a sick statement about the maturity of the men in the vicinity, yet her biggest ordeal was losing her daughter to a brutally vicious sex crime that remains unsolved after seven months, with no possible leads in sight.  Seeing three broken-down billboards along an isolated country road exactly where the crime occurred, Mildred gets the idea of using the billboards to make a provocative statement (much like the catchy Burma Shave billboard advertisements in the days of yore), going on local TV telling the public, “My daughter Angela was murdered 7 months ago, it seems to me the police department is too busy torturing black folk to solve actual crimes.”  It is no minor coincidence that the notorious racial disturbances of Ferguson just happen to be in the same state.  And lest we forget, Missouri was a late addition to the Southern Confederacy.

What we have in the police department is a permanent state of dysfunction, with the relatively decent Chief Willoughby (Woody Harrelson) overseeing a bunch a derelicts, led by the hapless Jason Dixon (Sam Rockwell), a numbskull officer with a hair-trigger temper and a reputation for crossing the line into racist mistreatment of black suspects, which is conveniently overlooked by the other members of the department.  At home, living on the outskirts of town, Dixon is a Mama’s boy, urged on by his hateful mother, Sandy Martin, always seen with a cocktail in her hand, browbeating her inept son to be more aggressively intimidating, making a statement by his very presence, but actually making others around him more nervous, as he’s a hothead, viewed as a constant embarrassment, going overboard on the most trivial matters, yet he has an endearing habit of confessing his shortcomings, even if unintentionally, and telling the exasperated truth, as if he’s always answering to his mother.  No doubt motivated by all the attention the billboards cause in town, Willoughby pays a visit to Mildred, whose initial response is classic, “The time it took you to get out here whining like a bitch, Willoughby, some other poor girl’s probably out there being butchered.”  Reporting there is no blood match in any national DNA database, Willoughby even acknowledges he’s dying of cancer, but Mildred is unsympathetic, claiming they could be doing more, as they’re hardly the picture of a dedicated and hard-working police department, especially with a goofball on the loose like Dixon.  The entire town, it seems, turns against Mildred, as their sympathies lie with Willoughby, a popular family man, but the more they try to get her to back down, the more resolute she is, knowing there is a greater chance of success in breaking the case if the event remains in the public headlines.  Mildred’s own son, however, Robbie (Lucas Hedges), is disgusted by his mother’s antics, as it’s a constant reminder of his sister’s loss, something already dominating his thoughts, where he seems to have no peace from the subject when its continually being shoved into his face.  At school, after her car windshield is egged by anonymous students unhappy with her tactics, she kicks the shit out of a few of the closest suspects, fully demonstrating how a bad ass behaves, much to Robbie’s displeasure, as that’s only adding more fuel to the fire.  When the police start arresting her friends for some trumped up charge, this only escalates the terms of engagement for Mildred, who goes on the warpath.

While there is a prevailing sense of humor throughout, much of it surprisingly offbeat, which typifies the director’s earlier works, but this one has greater dramatic reach, mirroring a prevailing feeling that there is something flawed about our criminal justice system, as so often the wrong criminals are charged, often languishing in prison for decades for crimes they didn’t commit, while the guilty parties are never charged, including a host of white police officers that are exonerated after killing unarmed black teenagers, a customary practice that never seems to end.  Mildred’s outrage at the lack of accountability for such a heinous crime taps into a similar mood felt throughout the country where there is no appearance of justice anymore, as no one is held accountable for some of the biggest crimes, like corporate theft and the layers of lawyers and lies that protect the guilty parties from prosecution.  In Mildred’s case, it’s like a hit and run, with no one witnessing the crime, where the culprit gets away scot free.  In a brief flashback sequence, there is an extra layer of guilt heaped upon Mildred for the last words coming out of her mouth just before Angela was raped and murdered, which only add to what is already an excruciating pain that never dissipates.  Mildred is an angry women, apparently mad at everyone, cursing out everyone she encounters with a mouth like a sailor, where she just feels like there is no justice left in the world.  Yet there are moments when her anger subsides and she turns instantly tender and understanding, where her mood shifts on a dime, such as when Willoughby coughs up blood during an interrogation, where a shock of mortality brings us all to our knees, becoming instantly sympathetic, no matter our beliefs.  These moments occur throughout the film, having a humanizing effect, even as it comically grows even more absurd.  There’s an interesting use of music, particularly a mournful Joan Baez rendition of a Civil War lament, Joan Baez - The Night They Drove Old Dixie Down - YouTube (3:26), which comes at a particularly incendiary moment, adding yet another layer of Civil War madness and grief, recounting the escalating saga of brother against brother unending violence that seems to perpetuate itself when every act is retaliated against, leading to a neverending stream of aggression and hostility, leaving hordes of victims in the wake, each one an inconsolable loss exactly like Angela.  There’s also an interesting use of letters in the film, each one coming from the grave, which are read out loud, offering a reservoir of wisdom and humor that seems to catch viewers by surprise, if only due to how unorthodox this technique seems to be, unearthing formidable emotions that have a healing effect on the community, where the anger and bitterness remain, but there is a chance it may subside into something else altogether, like forgiveness, perhaps even a friendship.
Posted by Robert Kennedy at 12:03 AM