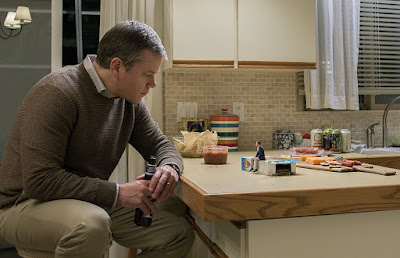 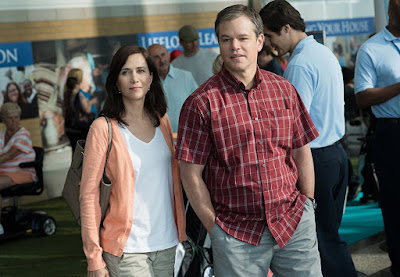 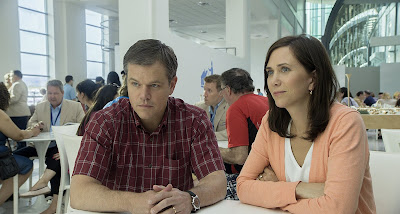 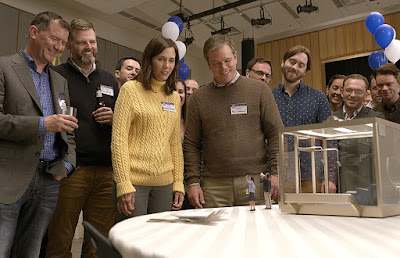 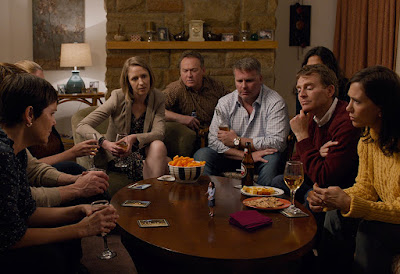 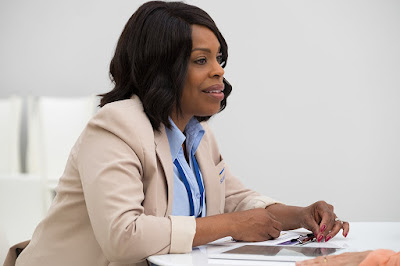 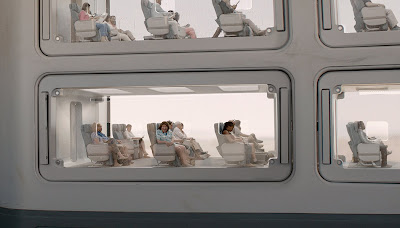 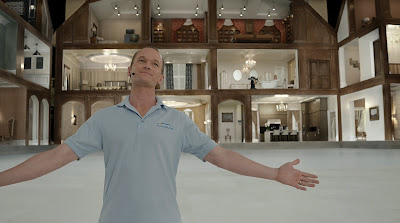 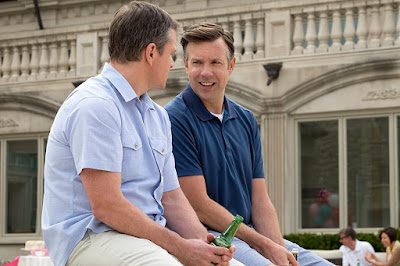 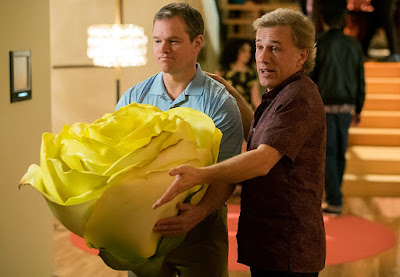 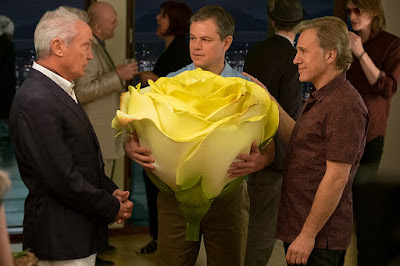 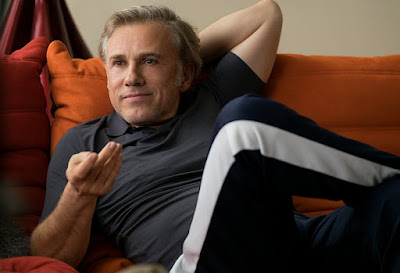 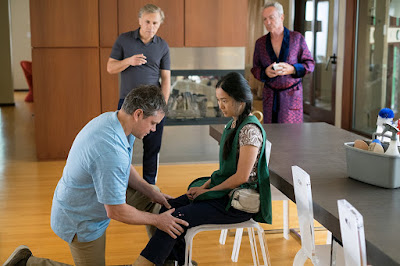 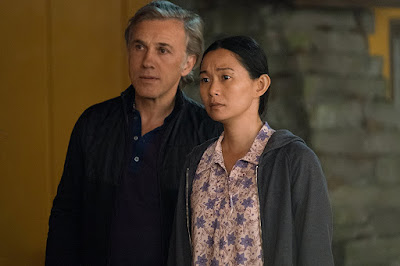 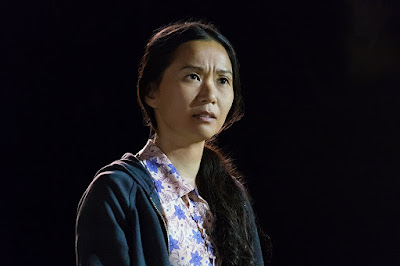 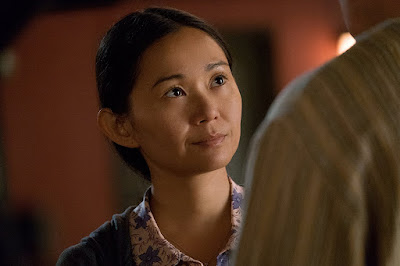 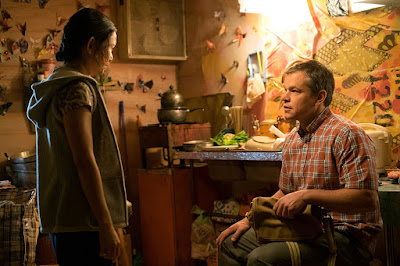 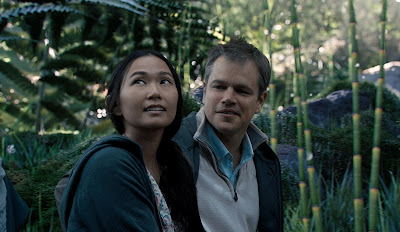 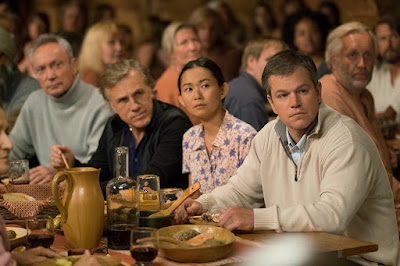 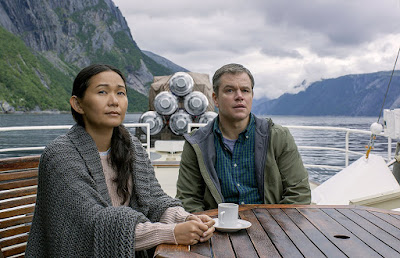 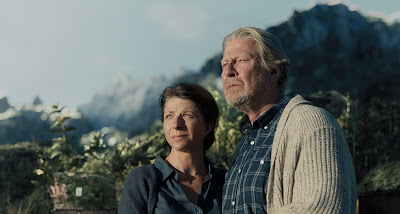 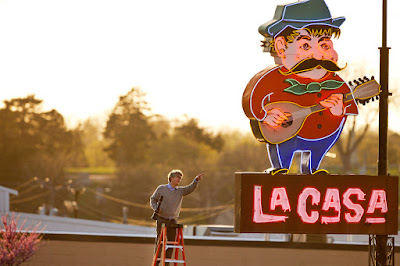 Thoroughly disappointing, feeling like a bad Disney film, this overly bright and cheerful film breathes optimism and good fortune despite its downbeat tone about an apocalyptic end of the world, with Christoph Waltz and Udo Kier playing a couple of “wild and crazy guys,” as there’s always some that take advantage of other’s misfortune.  A healthy bit of skepticism apparently ruins this film, populated by despicable people throughout, this film just never gets going, where the concept of shrinking people to five inches tall and going small to eradicate overpopulation is funny for about a minute, but then there’s two more hours left to go, feeling like it takes an eternity to get there.  Like a liberal ecological dream that goes haywire, becoming the world’s worst nightmare, this film starts out with a rush of energy but ends up mired in its own depression and gloom, feeling off-target, even preposterous, failing to generate even an ounce of sympathy, becoming one of the more distinctly banal and unnecessary films seen all year, where one wonders what Alexander Payne ever saw in this film, as it never materializes.  Whatever stabs are meant as satire simply get lost in the incessantly broad stylization, where no one will ever mistake this for serious social commentary, but it lacks humor as well, where the initial positive outlook slowly dissipates, forcing viewers to grit and bear it.  Enter Paul Safranek (Matt Damon, where the joke is nobody can ever pronounce his name correctly), an overly enthusiastic middle class dupe from Omaha who works as an occupational therapist at a local steak manufacturer, basically treating people on the assembly line that use repeated motions to the point of injuring themselves.  Viewed in the best possible light, Paul offers magical elixir cures to ordinary workers through various exercise techniques, advice that never works in the real world, but he receives plenty of thanks here, so already we’re getting this breezy and uplifting version of a life that doesn’t really exist.  That’s the first problem, as there’s no essential reality to speak of that anyone can relate to, instead it’s a sanitized version of harmonious middle class happiness, as if that really exists.  Paul and his wife Audrey (Kristen Wiig) complain of being mired in debt, seeing no way out, but then fall for this ridiculous advertising scheme for a miniaturized world where everyone is a King, living excessively large, free of all worldly concerns, as your money is enormously large in Leisureland, where you can kick back and enjoy all the things you’ve never been able to do in the real world.  Or so goes the pitch.  The problem is, Paul falls for it, especially when an old high school friend, Dave Johnson (Jason Sudeikis) and his wife Carol (Maribeth Monroe) are wheeled out in miniature at one of those boring high school reunions and are an instant hit, basically sealing the deal.  Omaha never looked more exasperatingly dull.

While researching the pros and cons, Paul is introduced to the work of Norwegian scientist Dr. Jørgen Asbjørnsen (Rolf Lassgard), whose visionary solution to the world’s population problem has become accepted around the world, with miniaturized communities consuming only a fraction of the resources, yet the catch to Paul and his American cohorts is a lifestyle of opulence, where you can afford to buy luxurious things and literally pamper yourself.  Finally agreeing to take the plunge, which involves an extensive procedure, Paul is surprised to learn his wife hasn’t followed him, that she backed out at the last moment, unwilling to leave her family, which obviously leaves Paul in the lurch, especially when he arrives all alone to his luxurious mansion with gorgeous chandeliers and plenty of closet space, all the things he never had before, suddenly unimportant, as his life is in shambles.  A year later his divorce is finalized, having moved into a new apartment complex, Paul is working as a Land’s End telemarketer, very ironic since that’s basically what got him interested in making the “change.”  His new life is dull and uninteresting, going on dates with women he’s barely interested in, having dinner with a new prospect when his upstairs neighbor starts blasting music.  Yelling out the window to keep it down, his neighbor arrives at his door to apologize, none other than Christopher Waltz as Dusan, a Serbian black marketeer, providing items where people don’t ask where they came from, selling Cuban cigars, for instance, suggesting “People become small to have the things only the rich could afford.”  Inviting him to a small gathering of friends that turns out to be a hundred people, Paul’s dinner is a bust anyway, but he couldn’t be more out of place in this chic oversized penthouse suite of the nouveau riche until someone slips him some ecstasy pills, going on a dreamlike adventure into an exotic new world, waking up on the floor the next morning as the cleaning crew arrives.  Dusan finds Paul a hapless loser, as he sweats the small stuff while ignoring the big picture, as he, along with his partner Udo Kier as Konrad, an aging playboy who also happens to be a ship captain, live the good life, free of all worries, where champagne and beautiful women seem enticed by their easygoing, freewheeling style.  Paul is instantly drawn to Ngoc Lan Tran (Hong Chau), one of the cleaning crew, whose notorious story made all the papers, as she was a jailed Vietnamese dissident who was downsized by the government against her will, eventually smuggled out of the country in a television, where all other companions were killed, and she was seriously injured, losing the lower part of her leg, using a prosthetic limb and walking with a noticeable limp.  Calling upon his previous profession, he takes a look at her, believing he can improve her mobility, much to Dusan’s cynical amusement.

Ngoc Lan Tran speaks broken English throughout, becoming a walking stereotype for a bracingly obnoxious Asian immigrant, as she orders Paul around like a nagging wife, thinking he’s a doctor, or at least the closest thing to it, taking him into her world, which is an overcrowded ghetto just outside the walls of Leisureland, an impoverished wasteland where people are sick with no medical care, or don’t have enough to eat, but exist as if in a state of limbo, not part of the world above or below, aliens or nonentities who are declared persona non grata everywhere else.  This international slum stymies Paul, as he’s never seen anything like this before, yet Ngoc Lan Tran orders him to the bedside of a dying patient, which is certainly beyond his capabilities, but provides opioid pain medicine stolen from the medicine cabinets of Dusan, which helps relieve the pain.  In a gesture that perhaps describes him to a T, Paul accidentally breaks her prosthetic limb when trying to tighten it, making her unable to work, ordering Paul to take her place on the cleaning crew, which Dusan finds hysterical (really moving down the career ladder!), while also gathering food for various residents in need that she regularly distributes.  This essentially alters Paul’s mission in life, becoming Ngoc Lan Tran’s ambassador of good will, helping people in need.  Attempting to offer a way out of this dire situation, Dusan asks Paul to join him and Konrad on a trip to Norway at the invite of Dr. Asbjørnsen, the site of the first successful miniaturized community, as he has an important announcement to make.  Ngoc Lan Tran, in her typical brazen manner, adds her name to the list, claiming Asbjørnsen extended her an open invitation when he first heard about her.  Despite her overcontrolling manner, basically ordering him around like he’s a child (though she tries to be a Vietnamese saint), Paul is a sucker for this woman, actually getting romantically involved, but perhaps an ocean trek into the Norwegian fjords will have that effect upon anyone.  While the imagery is a bit cheesy, where the miniaturization always feels like noticeable CGI effects, Asbjørnsen announces that humanity is doomed, that the toxic levels are irreversible, and human life on the planet will come to an end, offering an underground porthole that has been built to preserve life in the event of this outcome.  Paul jumps at the opportunity, asking Ngoc Lan Tran to join him, as this appears to be their only option for a viable future.  Ngoc Lan Tran, however, is committed to her slum community, while Dusan and Konrad are more skeptical, claiming this apocalypse will be years away, suggesting there’s plenty of life to enjoy in the meantime.  Where does that leave Paul?  Unfortunately this Brave New World is presented like some Twilight Zone episode, as who would really want to get stuck underground in an insulated artificial environment for decades to come?  The Norwegians, apparently, as they are ecstatic at the thought, providing a jubilant and celebratory exit before they freely march down the rabbit hole.  This outcome, however, is never really coherently presented, feeling more like sci-fi, as people take for granted they will survive, yet once in, there’s no way out, as they must be completely sealed into their hermetic existence.  This life or death dilemma is not much to ponder, as no one really knows what to expect in either outcome, leaving an audience perplexed, wondering what all the fuss is about.
Posted by Robert Kennedy at 12:00 AM