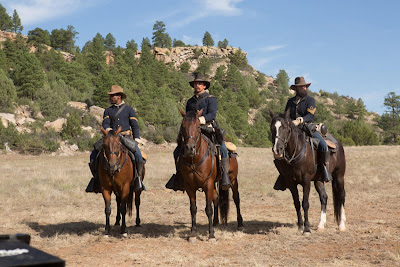 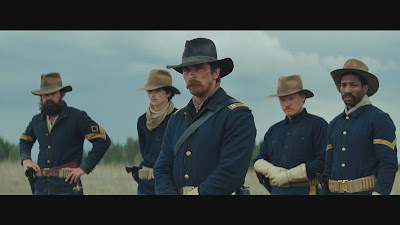 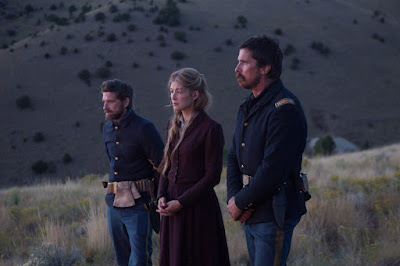 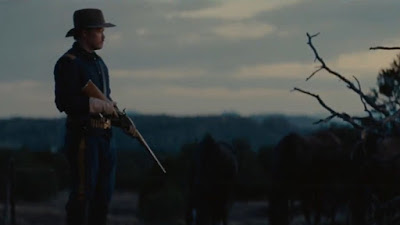 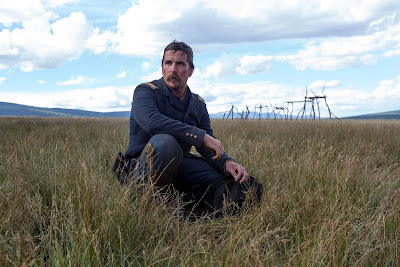 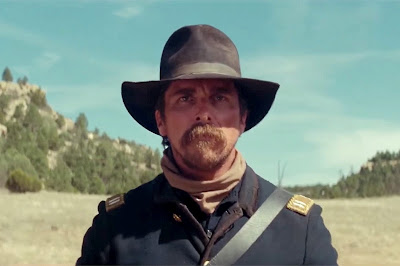 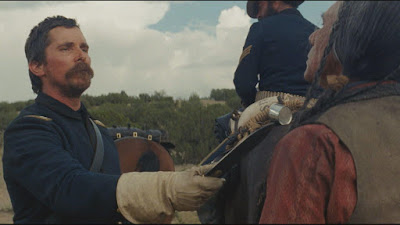 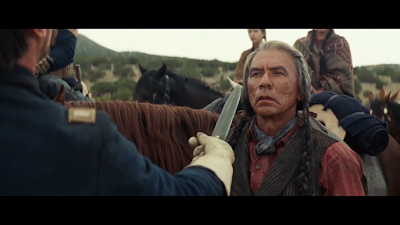 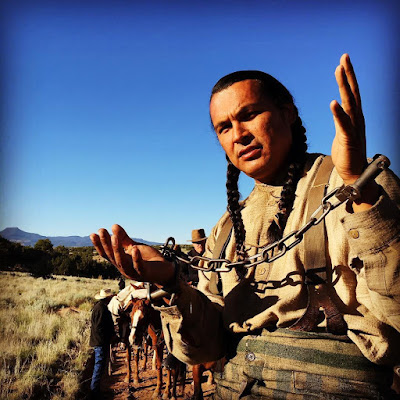 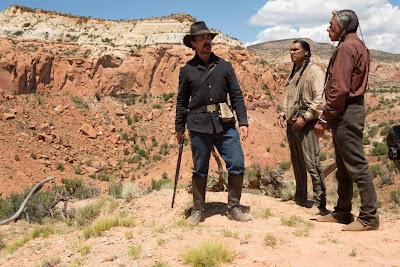 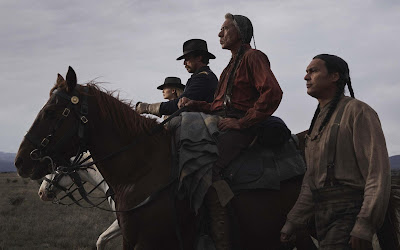 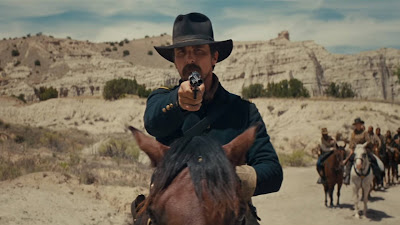 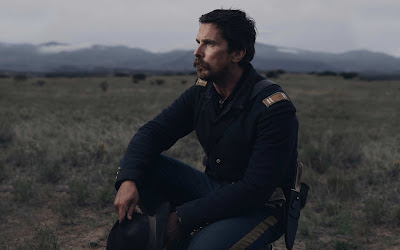 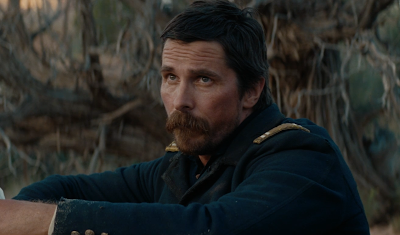 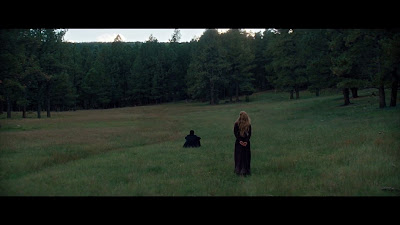 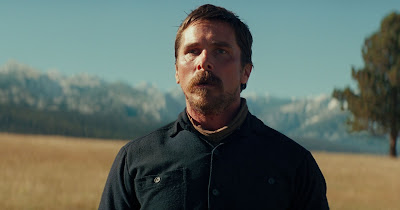 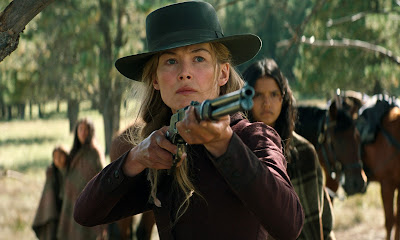 The essential American soul is hard, isolate, stoic, and a killer.  It has never yet melted.
—D.H. Lawrence

Like a kick in the face, the film starts out as just another white revisionist view of Manifest Destiny, revisiting New Mexico in 1892 as the Indian wars are coming to an end, with a multitude of Indian prisoners languishing in cages, surrounded by cavalry units who spent their careers in endless slaughter and retribution, serving as the living examples of men used to viewing Indians as savages, which more than anything represents a savagery within the American experience itself, as frontier settlers living on what for centuries had been undisputed Indian territory were subject to sporadic raids, with Indians violently attacking them, leaving no one spared in an effort to steal their horses.  Even before the opening credits we experience one such incident, a horrific incident of gruesome violence, with renegade Comanche’s tracking down each man, woman, and child, expressed as a visceral experience through a hail of bullets and arrows, with one woman getting away (Rosamund Pike), holding a dead baby in her arms, all that’s left of her family, long afterwards showing the ferocity and madness that accompany the incident, but also playing into all the stereotypes to justify what for centuries has been a scathingly racist portrait of American history, which leaves out Indian history, telling the story only from one side, excusing America’s own brutality in order to justify wiping out Indians with a policy of genocide.  Even today, history has not been rewritten, but continues to be told from the white perspective only, where racist and demeaning slurs in the names of popular sports mascots and team names, such as the Washington “Redskins” football team, generates millions of dollars in revenue, none of which goes to Native people.  America has not been reeducated on this history, despite scholarly works by Indians and others that tell a different story, but school curriculums haven’t changed, as our perceptions of history have instead largely been formed by the myths and stereotypes generated by John Ford westerns for the last hundred years, including THE SEARCHERS (1956) starring John Wayne, an avowed Indian hater, which is on the pantheon of films listed as the greatest western of them all.  Despite our knowledge and education, what’s changed?  Which is why it’s surprising to begin exactly where previous westerns left off, with Christian Bale as Army captain Joseph Blocker, another openly unforgiving Indian hater, having spent years on the western plains witnessing multiple atrocities, some by his own hand, with no one questioning his use of “wretched savages” to express his outright contempt for Indians of all tribes and nations.  Before anyone is comfortable in their seats, the battle lines have been drawn, with Bale playing the familiar John Wayne character, firm, resolute, irrepressible, and reflective, reading about Julius Caesar’s Gallic Wars (in Latin) by the light of the campfire.

Director Scott Cooper adapted the film from an unpublished story by Donald E. Stewart (who died in 1999, a manuscript discovered by his wife afterwards, choosing Cooper to make the film), integrating familiar actors into the story, having previously worked with Christian Bale in Out of the Furnace (2013), and before that Jeff Bridges (who won Best Actor and Best Song at the Academy Awards) as a down and out country singer on the road in CRAZY HEART (2009), two films that ache with authenticity.  It’s well worth mentioning that Cooper also brought his cinematographer Masanobu Takayanagi to this film, who also shot Spotlight (2015), Silver Linings Playbook (2012), and The Grey (2011), whose unmatched artistry of filming panoramic vistas reaches superb heights, becoming the singlemost important element of the film, as the land is an unspoken character of supreme power, having been there long before white settlers arrived, even before a single human ever set foot upon its shores.  Any historical tribute to the immeasurable American landscape deserves to pay homage to its enormity and beauty, as this element alone provides somber food for thought.  To that end this film is a success, though the immensity of the entire journey tells the story, evolving into something altogether different by the end than it was at the beginning.  In that sense it’s something of a welcome surprise.  Blocker is the heart of the film, as everything revolves around him, and Bale does not disappoint, having worked familiar territory in Terrence Malick’s The New World (2005), though his outwardly racist outbursts in the beginning fall on deaf ears, as he’s known as an honorable soldier, one of the few in command to be trusted with an important mission, in this case a directive from the President of the United States, President Benjamin Harrison, who orders Blocker to accompany released Cheyenne Indian prisoner Chief Yellow Hawk (Wes Studi), stricken with terminal cancer, whose dying wish is to return with his family to his original homeland in the Valley of the Bears in Montana, a wish granted by the President as an expression of good will.  With his retirement looming, Blocker has a history with Yellow Hawk, as mortal enemies, having been on opposite sides of many battles, losing plenty of good men to his “butchery,” retaliating in kind by brutally targeting the Cheyenne with a vengeance, developing an open hatred, but despite his protestations, he’s the one placed in charge of the detail.  No sooner are they out of sight but Blocker places Yellow Hawk and his son Black Hawk (Adam Beach) in irons, looking him in the eye and stating “I know who you are,” though nothing could be further from the truth, while their women, including Black Hawk’s wife, Q’orianka Kilcher from The New World as Elk Woman, walk alongside the men on horses.  As in nearly all westerns, the Indian characters are underwritten, as we barely get a glimpse of their mistreatment and marginalization, even though they play a central part of the film’s development.

Over time this becomes a redemption tale and a story of forgiveness, fueled by powerful performances, with the mood of the film slowly changing when they discover Rosalie Quaid (Rosamund Pike), a lone homesteader who survived a Comanche raid, losing her husband and four children, still in shock, having temporarily lost her mind, taking care of fictitious children that are already dead, then insisting upon burying them herself, uselessly scratching the dirt with her own fingers before giving way to the soldiers.  Blocker goes to great lengths to give her space and show a calm respect to this woman, promising not to hurt her, offering his tent, fully respecting her gargantuan loss, where she again goes into shock upon seeing the other Indians, literally recoiling at the sight.  Out of sympathy and respect for her obvious pain, the Indian women offer a mourning dress and blankets, with Yellow Hawk calling the Comanche acts repugnant, claiming the rogue warriors are “not of sound mind,” warning the captain however that they will return, asking to be released from irons.  When the attack comes, several men are lost, with the Cheyenne aiding in the battle, with the captain releasing the irons begrudgingly afterwards, as it’s now all hands on deck.  When they discover the last of the Comanche perpetrators dead along the wayside, it’s suggested that Yellow Hawk and his son might have been responsible, secretly acting under cover of darkness, paving the way for safe travel.  By the time they get to Colorado, Blocker agrees to transport a prisoner, Sergeant Charles Wills (Ben Foster), a convicted ax murderer, to a fort where he’ll be hanged, having slaughtered an innocent Indian family.  Rosalie prefers to continue the journey, with no train or stagecoach in the vicinity, at one point asking Blocker if he has faith, contending without it, she’d otherwise have nothing.  His telling response, “Yes I do.  But he’s been blind to what’s been going on here for a long time.”  It’s a tender moment that becomes part of a slow healing process, as the hate eventually subsides, replaced by an altogether different element of earned respect, mirrored in Rosalie as well, who quickly befriends their Indian counterparts.  Adding reinforcements to the detail, one is Ryan Bingham, a singer and actor who previously appeared in CRAZY HEART, actually writing the Best Song, performing another song by campfire, Ryan Bingham - “How Shall A Sparrow Fly” (From HOSTILES ... YouTube (2:57).  The journey is treacherous and costly, a descent into the heart of darkness, a rude awakening thinning the ranks, threatened by a lawlessness that defines the frontier, still uncivilized, yet beautifully photographed, where each has time to examine their own souls, including the prisoner who once rode with the captain in many of his campaigns, suggesting their positions could be reversed, with Blocker reminding him he was always just “doing his job,” a familiar refrain to justify murderous acts (the Adolf Eichmann defense), where viewers can weigh the cost of history and judge for themselves.  Filled with contentious obstacles faced along the way, finally arriving with a view of Yellow Hawk’s homeland, his end is near, with Blocker gently reminding him of the many friends who died by the hand of Yellow Hawk, yet “A part of me dies with you.”  While violence and hatred continue to plague this budding new nation, with open defiance a phony stand-in for freedom, it’s clear law is a concept that has not yet taken hold, where even a President’s decree is just a piece of paper, easily ignored, but what’s clearly evident is a poetry and grace in the final acts, a transformative spirit, with the vitriol cleansed amongst the dead and the weary, replaced by human decency and a noble kindness of the heart, part of the changing interior landscape, with humanity still weighing in the balance.
Note
Despite the glimpse of hope expressed in the final shot (from a white perspective, like the beginning of a long, redemptive journey), it should be pointed out that from an Indian point of view there is a complete absence of hope, instead a shock of horror, a reference to “the stolen generations” in Australia and Phillip Noyce’s RABBIT-PROOF FENCE (2002), where from 1910 to 1970 Aboriginal children were removed from their homes by force and raised as Christian whites, with their Native dress, customs, and history purged from their collective memories, leaving little doubt what will happen to that surviving Indian child, whose Native history certainly won’t be part of his Anglicized reeducation, with little honor paid to him for being the grandson of a Cheyenne Indian chief, a despised figure in American culture at that time.
Posted by Robert Kennedy at 12:00 AM