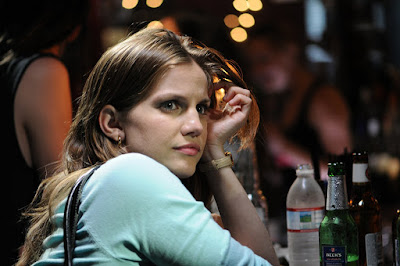 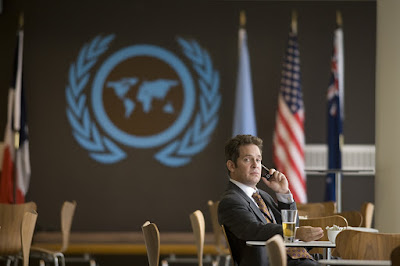 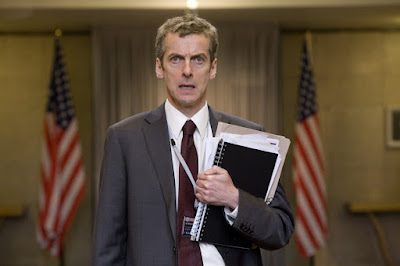 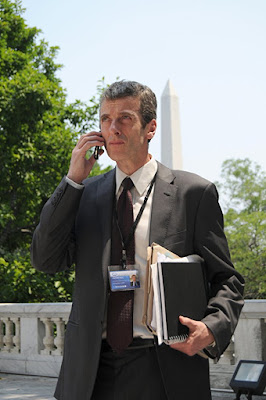 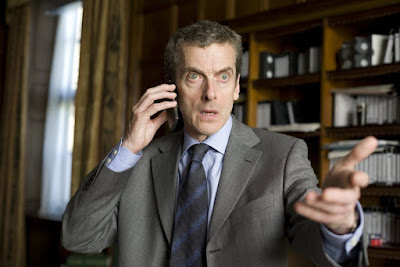 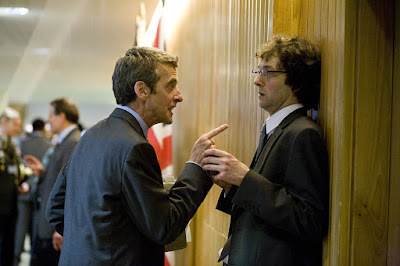 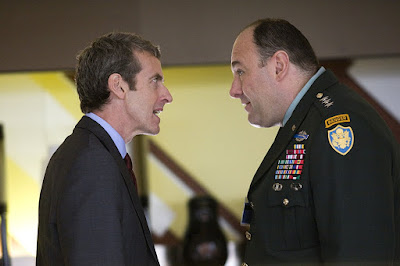 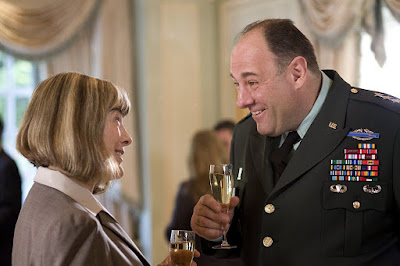 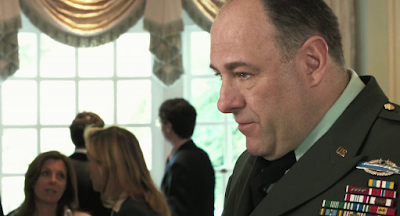 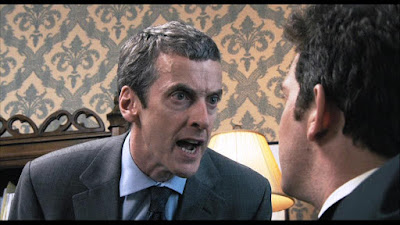 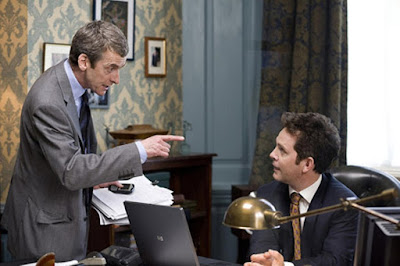 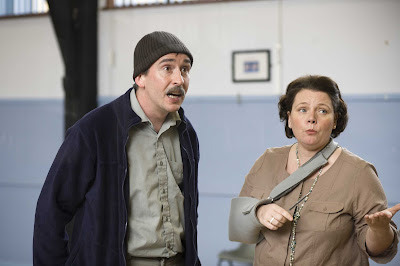 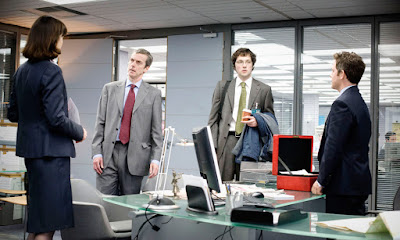 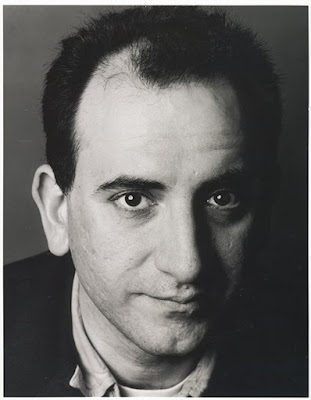 Given a sense from someone who’s been writing TV shows all his life, this first feature film is no different, as it has the feel of a free-wheeling, expletive-driven cable TV show, fueled by plenty of nonstop profanity that explode like bombs in and around the rooms of government with such frequency they may as well be heat-seeking missiles.  Without ever mentioning names, this adrenaline-laced political farce resembles the behind-the-scenes shenanigans in the Bush White House leading up to the Iraqi invasion, as no one wants to go on record as talking about an impending war, so they disguise every word they use with subterfuge, denying anything remotely resembling the truth while inventing theories or spreading false rumors to send reporters scurrying in the wrong direction.  Based on a British TV show The Thick of It, which uses a similar (the most foul-mouthed) main character and has been running since 2005, this film mixes the bumbling political operatives working on both sides of the ocean, both the British and the Americans, each more dysfunctional than the next.  Starting with Tom Hollander as Simon Foster, British Minister for International Development, a low level bureaucrat who doesn’t stand for anything, who’s always on the verge of standing for something, but when the cameras are rolling has a tendency to offer delectable sound bites that instantly pique the interest of the opposite shores.  When asked during a live BBC broadcast about impending war in the Middle East, Foster blurts out “war is unforeseeable,” a seemingly innocuous phrase that is immediately seized upon as a break from the Prime Minister’s views, where attack dog Malcolm Tucker (Peter Capaldi, from the TV show), communications director from the Prime Minister’s office, hurls the first of his series of neverending invectives to shut him up, as well as anyone else that stands in his way.  Tucker’s character is easily the most hilarious, as in typical John Cleese fashion, he never tires of inventing the most personalized profanity-laden insults ever hurled.  The phrase has already captured the attention of a liberal American cabinet assistant Karen Clarke (Mimi Kennedy) and her bright assistant, Anna Chlumsky, who actually authored a paper outlining the pros and cons of going to war, heavier on the reasons to avoid invasion.  A political firestorm ensues.

Foster, however, after getting thoroughly chewed out, in an attempt to backtrack and sound completely ambiguous, utters the phrase “Britain must be ready to climb the mountain of conflict,” which puts him at the center of the conflict and gets him an invite to a Congressional committee hearing room led by the Rumsfeld-like warmonger David Rasche playing state department secretary Linton Barwick, whose first order of business after the meeting is over is to officially change the notes from what was actually said to what he felt they intended to say.  Added into the mix is James Gandolfini as a Colin Powell-esque Lt. General Miller, who is adamantly against war, claiming:  ”Once you’ve been there, once you’ve seen it, you never want to go back unless you have to—like France,” using his intelligence sources just to find where the meeting was held, as it was disguised under a fictitious name.  Gandolfini can hurl the invectives as good as the next guy, so for awhile this feels like a testosterone heavy profanity contest, creating an entirely new language spoken behind closed doors in the halls of government.  While it is outrageously funny, the tone moves from manic to screwball comedy to farce, the one-liner zingers are uttered fast and furiously, where after awhile you reach a saturation point as it all starts to sound the same.  While there’s little actual politics in evidence, or any real discussion, instead everything takes place behind the scenes in an attempt to undermine, outmaneuver, or even annihilate the opposition, as it’s all about being top dog, forcing others to be subservient to you.  This is the role Barwick cherishes, even as he has no qualms using fabricated intelligence, which, for sheer idiocy, turns out to be a rewritten hack job of Chlumsky’s paper now advocating going to war, claiming this is classified British intelligence.  This film exposes the lunacy of this kind of secrecy and backstabbing, where they’re so busy falsifying evidence and bullying the opposition that the world of deceit and power is all they understand, not the one the rest of us live in.

While this is obviously a satirical spoof, where the frenetic pace of the film is a nonstop charade of getting the jump on the next guy, continuously feeding others a pile of lies and misdirection, it’s also uttering only meaningless phrases on camera while maintaining an undetected secret agenda behind the scenes, spending one’s entire career mastering deceit, having no interest whatsoever in one’s constituency, as real people may not like what you’re doing.  Instead, this accurately describes how people invent the kind of world they live in, building a simulated parallel universe, one that is acceptable to the TV public, while behind the scenes fucking over anyone that gets in their way.  This film specializes in those close up, behind the scene moments, which are a rare glimpse at just how vulgar our leaders can be, as they likely got to where they are by being better at intimidating and browbeating others.  In the world of government, it’s all about who can threaten others successfully and get away with it, or who’s the biggest bully on the block.  Showing tenacious insight into comic material, where the key is the relentless use of ever more colorful profanity, there is a myriad of characters that collectively become a combustible force, as there’s something more powerful here than any of us realize.  That’s the part that doesn’t get written about, or examined, or subject to investigative scrutiny, and that’s the raw verbiage of high-powered political operators as they try to outscheme their opponents “by any means necessary, ” a phrase popularized by Malcolm X and the Black Panthers in the 1960’s.   Never in their wildest dreams did they think it would be the reactionary right wing law and order advocates who would secretly usurp their methodology in advancing the nation’s case for going to war.
Posted by Robert Kennedy at 12:01 AM