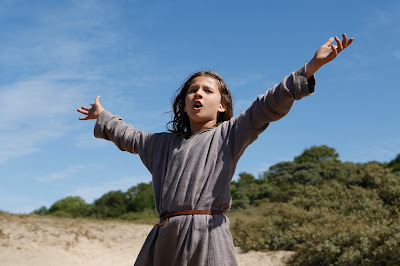 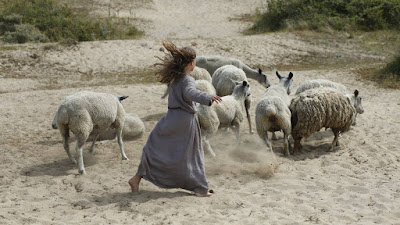 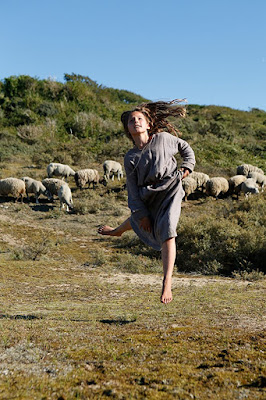 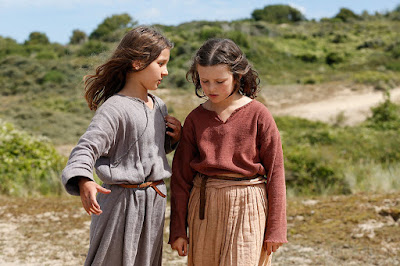 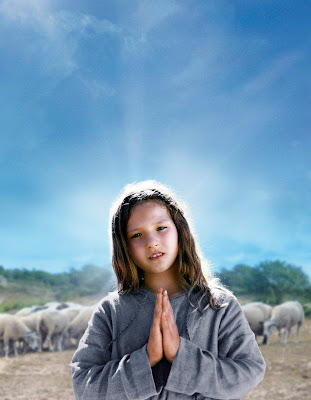 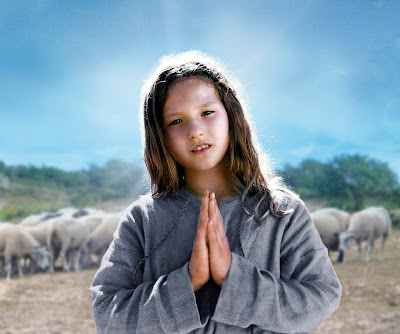 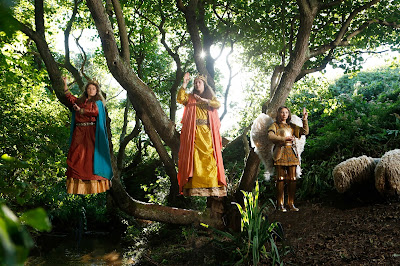 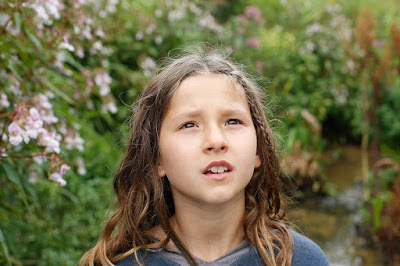 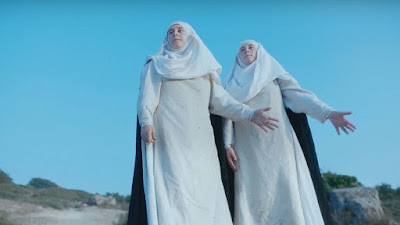 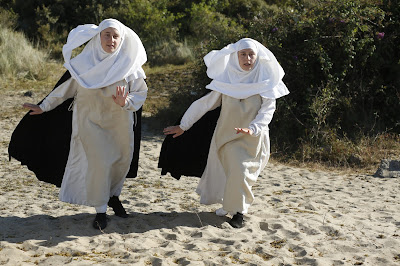 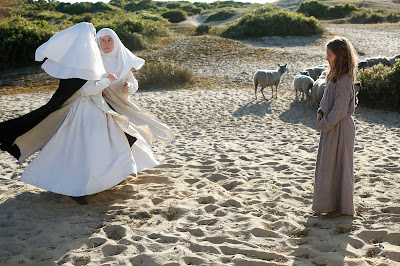 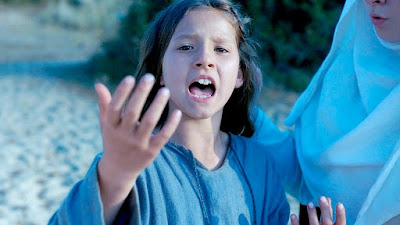 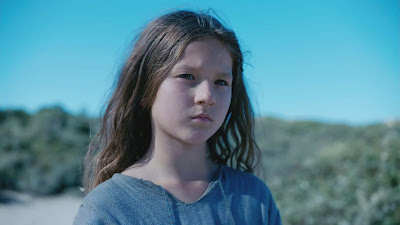 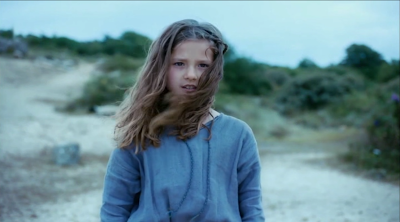 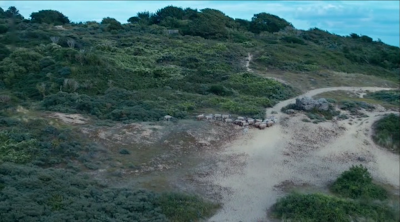 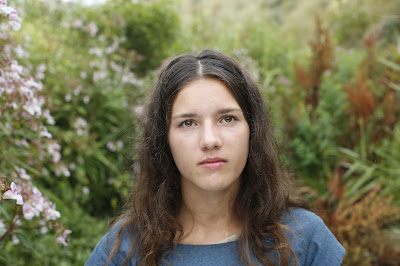 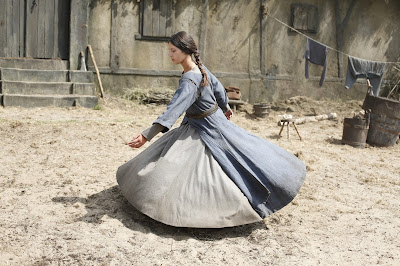 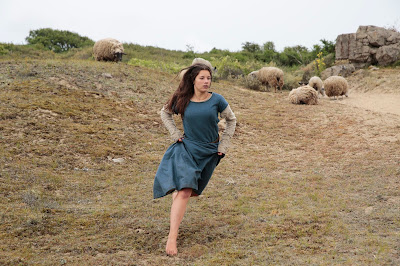 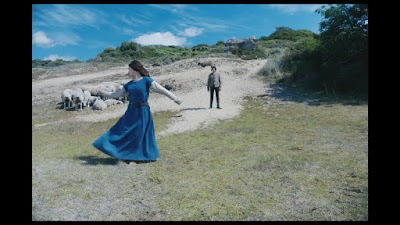 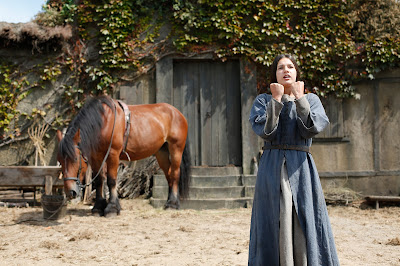 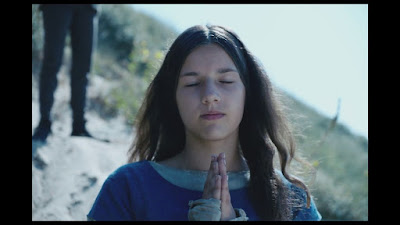 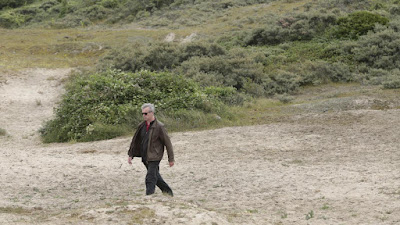 Director Bruno Dumont on the set 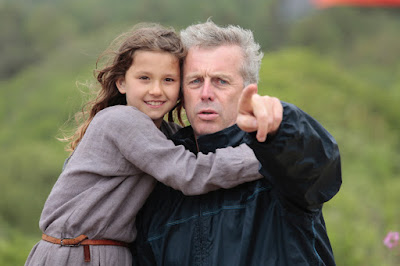 Dumont’s dark parable Hors Satan (2011) took the film about as far as it could go, philosophically speaking, much like Béla Tarr in The Turin Horse (2011), reaching the end of the road.  His resurgence with a provincial crime drama, L'il Quinquin (P'tit Quinquin) – Made for TV (2015), and comic farce, Slack Bay (Ma Loute) (2016), have seemed like an odd detour, basically challenging what was an austere director to work in a more whimsical style, where it would be difficult to call this new direction a success, as these are wildly offbeat efforts that defy audiences to like them.  Dumont is back to using non-professional actors that few have heard of, skimping on production detail, seemingly making a film on the fly, like a stream-of-conscious effort, where the challenge is on Dumont to produce something out of nothing.  The results are mixed.  Some are offering high praise for sheer bonkers originality.  Don’t expect that here.  While clearly he has created something unlike anything else he’s ever done before, this is also absurdly exaggerated, inert filmmaking, an overly staged song and dance production set in a natural world, but completely artificialized, performed entirely for the camera, becoming a style over substance film.  The story of Joan of Arc is one of the most often depicted throughout the annals of cinema, with the most infamous being Dreyer’s silent masterwork, THE PASSION OF JOAN OF ARC (1928), Rivette’s six-hour JOAN THE MAID (1994), and Bresson’s The Trial of Joan of Arc (Procès de Jeanne d'Arc) (1962), where the French in particular find this among the most treasured moments in history, as a teenage shepherdess inspired by communions with God and visions of holy saints actually joins the battlefield, turning the tide of history, leading the charge to drive the British out of France, where she was arrested by the enemy, tried and charged with heresy, eventually burned at the stake.  Her sainthood is an inspirational story of the miraculous power of divine faith, as Jeanne was herself a commoner, a farm girl, uneducated and illiterate, yet she was challenged by the most brilliant legal minds and scholars in England, and held her own, remaining defiant until the end, reaffirming her faith in God, not the English.  Dumont has already filmed a Joan of Arc parable taking place in the modern world, 2010 Top Ten Films of the Year: #5 Hadewijch (2009), which remains one of his best films, but his interest here is with the historical figure herself, not in her most valiant moments, but in what came before, the prequel of what led to her transformation into becoming such an iconic figure.  Turning this into a rock opera, staged outdoors near Domrémy, the birthplace of Jeanne, this is a no frills reproduction, using electronic music largely composed by French musician Gautier Serre, aka Igorrr.

Set in 1425, we are immediately introduced to an 8-year old Jeanne (Lise Leplat Prudhomme), tending to her small flock of sheep roaming the sandy hillsides of the Meuse River, between the villages of Maxey and Domrémy, where Jeanne is seen wading through a small creek, facing the camera, breaking out into song, praying to God to provide a warlord that will drive the English occupying force out of France.  This pretty much describes the rest of the film, as it is exactly the same.  While there are a few moments of spoken words, mostly everything is sung, with characters standing still, facing the camera, occasionally using arm gestures in rhythm with the music or breaking out into a brief spontaneous dance (choreography by Philippe Decouflé).  The static repetition becomes stifling after a while, presented in tableaux format, mostly in close-up, though the changing camera angles often move to high above, gazing upon the world below.  Inspired by the Charles Péguy play published in 1910, Les Mystères de la Charité de Jeanne d’Arc, the film examines the origins of her spiritual conversion, though the words and music are not particularly challenging or inspirational, but are just as repetitive as the static imagery.  So what we’re viewing resembles an animated still-life painting absurdly springing to life, like a choreographed fantasia, fueled by a fairly mediocre musical soundtrack that produces no memorable songs.  If not for the historical importance of the central figure, there would be no interest whatsoever in this work.  Much of it feels amateurish and silly, not always hitting the right notes, with moments of jaw-dropping absurdity at how unaccomplished it is, much like an elementary school production, where the film takes place almost entirely at the same location, using intertitles to announce the passage of time, but the place, somewhat humorously, doesn’t change.  A handful of characters are introduced, mostly relatives, a lone friend, a pair of nuns, and of course the saintly vision, but mostly we are treated to close-ups of this innocent new face.  With the Hundred Years’ War (Hundred Years' War | Britannica.com) weighing heavily upon her shoulders, Jeanne is overwhelmed by a pervasive feeling of sadness, as France has tragically succumbed, with many accepting their fate, lost in the hopelessness of endless perdition, praying to break the English siege of Orléans, for an end to the darkness.  Jeanne is able to speak freely with her same-age friend Hauviette (Lucile Gauthier), who has already entered a convent, so they are on a similar spiritual plane, both strong religious advocates, perhaps even considered extremists.  They are soon joined by Madame Gervaise, an influential nun from the convent, played by two sisters, Elise and Aloine Charles, who add their own unique dance choreography to the mix, all of which figure into Jeanne’s spiritual awakening.

It must be said that whatever transcendent spiritual aspirations Dumont might have been going for are constantly undermined by the simplicity of the words and the banality of the music, where only the absurdity of the distorted body movements hold any viewer interest at all.  In fact, one could step out of the theater for twenty minutes or so and return later, and you’d have missed nothing important, as it all feels exactly the same, where the overall tone never changes.  The same can’t be said for more compelling films.  Turning Jeanne into a childhood rock star may be a fanciful notion, much like the Broadway hit Jesus Christ Superstar, but cinematically nothing of note actually happens, as the characters simply stand around and sing music that is instantly forgettable.  Despite a fierce Christian devotion, not a hint of it is expressed onscreen.  One might argue this is the Brechtian method, using flat performances where the emotion must be provided by viewers, but Brechtian theater is also accompanied by well-written and powerful language that has the capacity to dramatically move an audience.  Not so here.  Always one of the key moments in her radicalization is Jeanne’s early mystical visions of saints, played here by Saints Margaret and Catherine (the Charles sisters again), both wearing crowns, and Archangel Michael (Anaїs Rivière) with wings, each digitally levitating, hovering over a nearby tree branch, instilling courage in the young girl to break the siege herself, something she finds impossible at her age.  Jumping ahead three years, Jeanne is played by a new actress (Jeanne Voisin), who summons her uncle (Nicolas Leclaire) in a plot to deceive her parents in order to escape her village and finally lead the French resistance.  (There is a Monty Python pratfall when the uncle attempts to mount a horse just behind Jeanne, but instead misses and falls to the ground.)  Plagued by the idea of family betrayal, lying to her family in order to obey God, Jeanne lingers in personal anguish, claiming she didn’t understand the message of the saints until now, but as there is no one else, she believes she is the one called upon by God to reassert France’s rightful sovereignty, leaving town by horseback, ending where other portrayals are just getting started.  Traditionally France has always been a devoutly Catholic nation (more than 80% just a decade ago) with a rich heritage, one of the first countries to adopt Catholicism as its official religion, as evidenced by the multitude of church spires that hold the highest vantage point in nearly every rural village across the nation, or Rohmer’s My Night at Maud's (Ma Nuit Chez Maud) (1969), but the numbers are grim, with more than one-third of France’s population and almost two-thirds of its youth declaring no religion at all, with only about 5% regularly attending Mass anymore (The Church In Decline: France's Vanishing Catholics).  An avowed atheist with an obsession for matters of the spirit and the flesh, perhaps Dumont is attempting to tap into this apathetic youth rebellion by enticing them with an outlandishly bizarre and awkwardly weird made-for TV film that plays in living rooms across the nation, already indicating he wants to make a sequel to the prequel.
Posted by Robert Kennedy at 12:07 AM