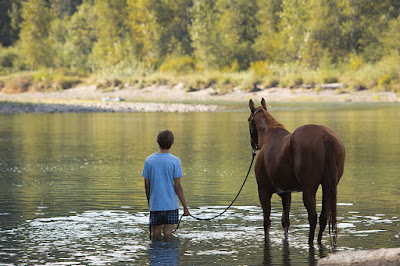 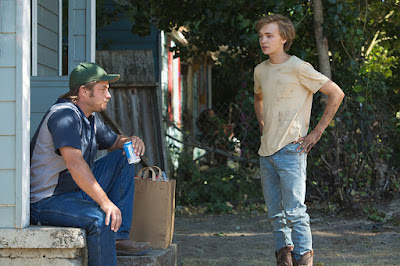 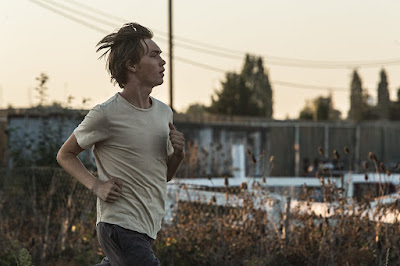 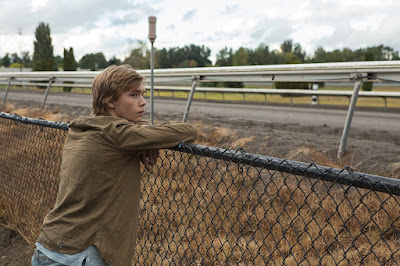 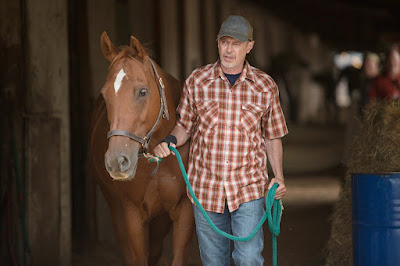 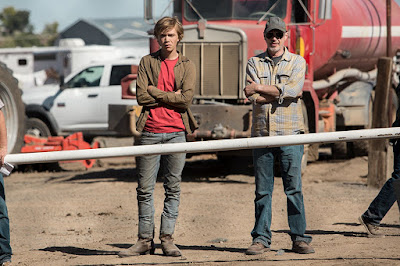 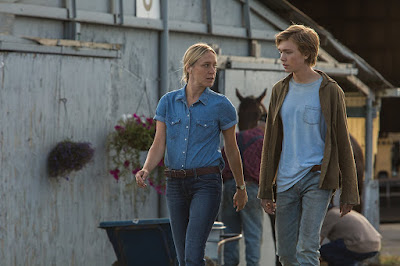 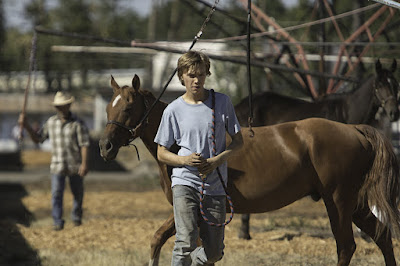 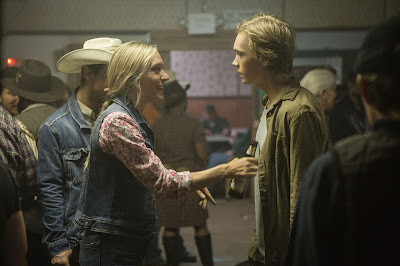 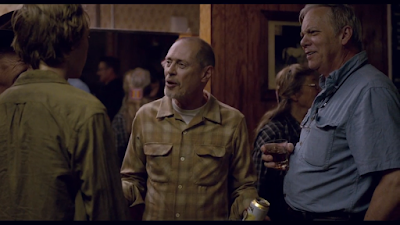 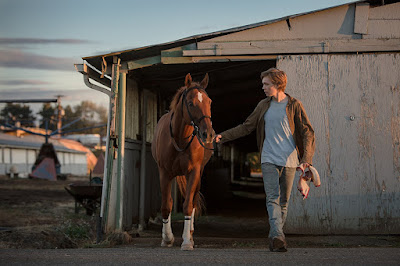 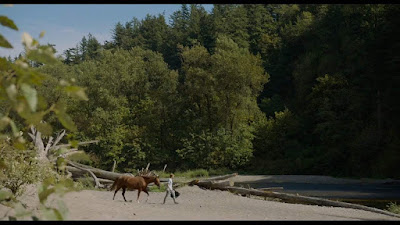 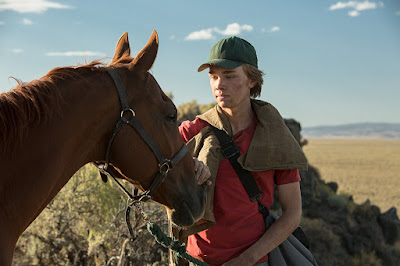 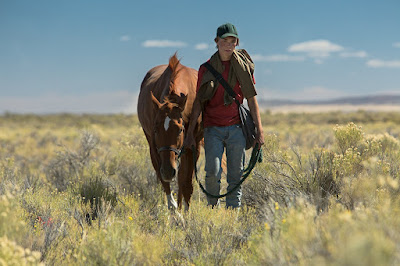 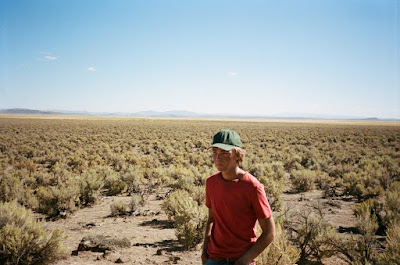 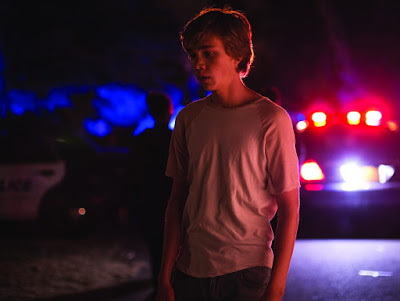 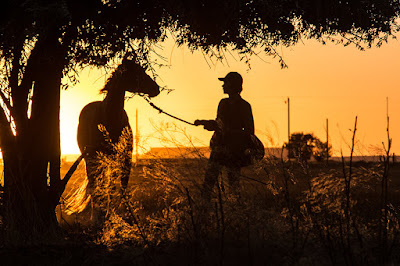 It is true that we are weak and sick and ugly and quarrelsome but if that is all we ever were, we would millenniums ago have disappeared from the face of the earth.
—Journal of a Novel, from letters written in 1951 by John Steinbeck about his longest novel, East of Eden, published a year later, also quoted in Willy Vlautin’s 2010 novel

British-born writer/director Andrew Haigh, creator of Weekend (2011) and 45 Years (2016), is known for making naturalistic relationship movies, probing character studies that intimately explore the human drama at different stages of life, both young and old.  What’s different here is the film was not written by Haigh, but adapted from Willy Vlautin’s 2010 novel Lean on Pete, set on the backroads of Oregon, exploring people near the bottom of America’s social and economic spectrum.  Vlautin doubles as a singer/songwriter/guitarist for the Portland indie band The Delines, where this film, at least, resembles an oddly beautiful portrait of the kind of people who have been left behind in the American underclass, ordinary people affected by the downturn in the economy, who live day to day, with little thought about what happens tomorrow.  Deluged in personal turmoil, the film reaches for territory explored by Oregon filmmaker Kelly Reichardt, particularly Wendy and Lucy (2008), exploring a world of hard knocks.  At the center of this universe is Charlie Plummer as 15-year old Charley Thompson, a River Phoenix kind of role in a coming-of-age story about a troubled kid living with his alcoholic father Ray (Travis Fimmel) in a run-down house on the outskirts of Portland.  Charley’s mother abandoned him at an early age, just left one day and never came back, most likely due to Ray’s drinking and carousing, always cheating with somebody else’s wife, just like Paul Newman in Martin Ritt’s Hud (1963), a guy with questionable moral ethics.  Charley, on the other hand, is a good-natured kid, honest and hard-working, proud of being on the high school football team with friends back in Spokane before work led them to Portland.  Now he can be seen running through a myriad of streets each morning, which is the way he begins each day.  Cereal is kept in the refrigerator along with beer, as they’ve got roaches.  In hearftfelt, man-to-man talks, Ray’s fatherly advice is that the best women were all waitresses once, supposedly words to live by, but it may simply mean Ray spent in inordinate amount of time in diners chasing after skirts.  While it might seem peculiar to have a British director express the open frontier spirit of the American West, like many European directors before him, Antonioni with Zabriskie Point (1970), Wim Wenders with Paris, Texas (1984), Paolo Sorrentino with This Must Be the Place (2011), though this one may have more in common with British director Andrea Arnold’s American Honey (2016), a wrenching vision of throwaway kids in America, Haigh provides what amounts to a landscape view, beautifully shot by Danish cinematographer Magnus Nordenhof Jønck, as the enormity of the country eventually engulfs Charley, who embarks on a personal odyssey of heartbreak and misfortune.

Spotted on his morning jogs is the nearby Portland Meadows racetrack, asking around if there are any jobs, where he runs into an unscrupulous character, Del Montgomery (Steve Buscemi), a gruff, world weary horse trainer with a gutter mouth who seems perpetually down on his luck and embroiled in a world of trouble, but prefers keeping the kid out of it, racing quarter horses for a living, where he follows the circuit.  Using the kid as cheap labor, he brings him along to look after the horses while he drinks and commiserates about his fate, racing two horses, neither one any good.  Overjoyed that he’s finally got a few dollars in his pocket to buy food, as he’s perpetualy hungry, like most teenage boys, as his father can disappear for days on end.  This job takes him on the road, where he sleeps on the back of the truck underneath the stars, but feels grateful, as despite everyone’s warnings, he develops a close relationship with one of the horses, Lean on Pete, who’s probably too old to keep racing.  Along with a veteran female jockey Bonnie (Chloë Sevigny), who’s been through the business, with Del being one of the few offering her a chance to work, they comprise a temporary family filling a void in his own life, which takes a downturn when a man breaks into their home and assaults Ray for sleeping with his wife, ending up with a bullet in his belly, along with broken glass in his intestines when he fell through a glass window.  While there are indications that he might survive, he’s in intensive care, eventually succumbing while Charley is on the road, leaving him in a state of flux, where he moves into the horse stable next to Lean on Pete, telling him his troubles while sleeping at the racetrack.  This allows him to escape into the racing circuit where Del resorts to unethical methods, injecting drugs or using an electric buzzer, selling one of the horses while overracing the other, literally running him into the ground, where he’s fated to be sold to Mexico where he’ll be ground into horsemeat, the same fate that awaits the wild mustangs at the end of The Misfits (1961).  Disgusted by this, Charley seeks another option, but has no leverage in the situation, so instead of pulling the horse around for Del, he just keeps driving into the night, with no plan whatsoever, just running on fumes.

Short of cash, Charley can only get so far in a truck that runs on gasoline, getting into a few touchy situations where he orders food, including something to go for the horse, but gets caught trying to escape without paying.  While held for the police, the manager gets distracted, allowing Charley to escape, but this is a sign of what lies ahead.  Eventually the boy and his horse trek across the country on foot, with Charley telling Pete the story of his life en route, stopping from time to time for food or water along the way, knocking on doors.  While some reach out with a helping hand, others are so caught up in their own lives that they barely notice his existence, including a pair of returning war veterans who are more addicted to their video games than hospitality.  But they keep Charley around out of curiosity, inviting him to dinner with their racist and demeaning uncle, routinely describing some of the gruesome horrors they witnessed, hardly appropriate for dinner conversation, but it is a portrait of life on the margins, where cruelty is an everyday existence.  Slipping out in the night, he continues his journey, by now setting his sights on an aunt in Wyoming, but when he calls, she’s moved away from her last known address.  The journey becomes more grueling, wearing the same clothes across a hot and dusty landscape, where his endless stream-of-conscious narration feels like a metaphor for the life he’s missing, becoming more perilous when the film descends into bleakness and criminality, breaking into homes, becoming ever more desperate, eventually hanging out with drunks and dopers on the city streets of Denver, finding free meals at a mission, picking up any available work to put money in his pocket, but his cut-throat existence is a precarious one, surrounded by petty criminals and thieves who’ve been at it much longer than he has, taking advantage of his youthful naïveté, respecting absolutely nothing, taking whatever they can, caring nothing about him.  Smartly written, told in a realist manner, it’s a tragic turn of events without an ounce of self-pity, literally immersed into a world of skid row, with damnation and starvation in every direction, seemingly with no way out.  It’s a tale of redemption, though, however hard-earned, where the trauma incurred along the way gets its hooks in him, leaving him a broken version of his former self, visibly imperceptable, perhaps, though internally he’s a million miles from where he was, reflected in the stripped down acoustical refrains of an R. Kelly song that leads to the end credits, The Worlds Greatest - Bonnie Prince Billy - YouTube (2:26), transformed by the artist formerly known as Will Oldham from Old Joy (2006).
Posted by Robert Kennedy at 12:28 AM