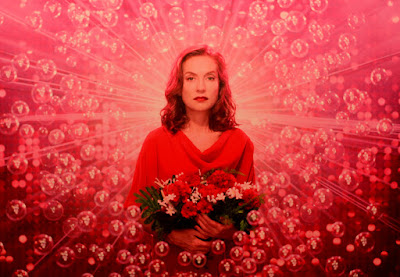 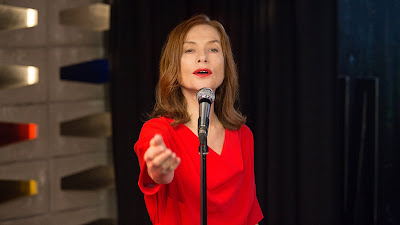 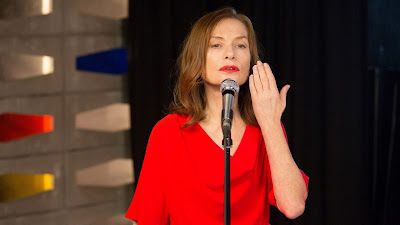 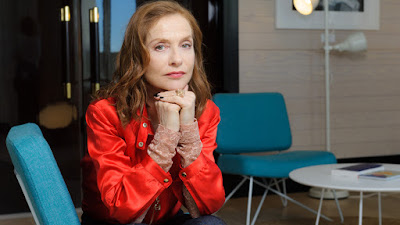 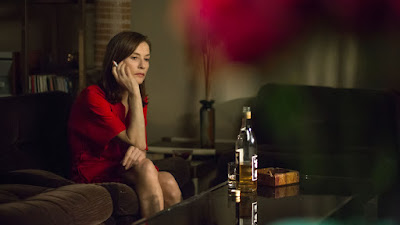 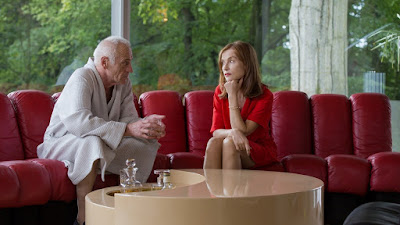 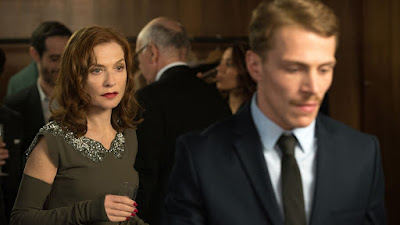 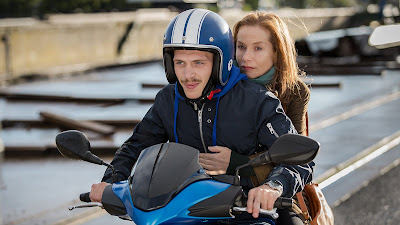 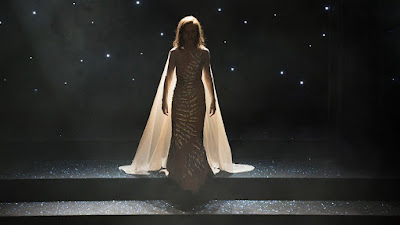 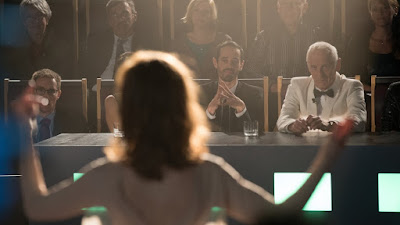 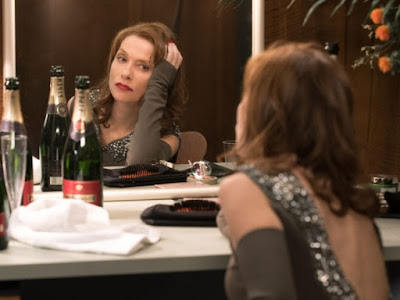 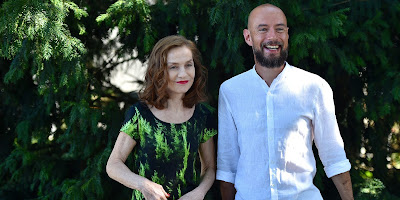 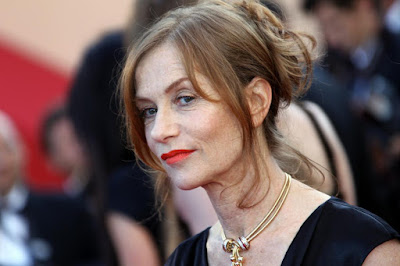 An utterly forgettable work, a wretched little offbeat romantic comedy that couldn’t be more conventional, so slight that it’s barely worth remembering, that continually defies logic with bad choices, becoming more and more uncomfortable to watch throughout, not because of content, but due to the amateurishness of the production.  This lame effort is a reminder of the kinds of French films that never get exported, that remain in-house fodder for late-night TV viewing, as this cliché-ridden trifle is simply an embarrassment, arguably the worst film ever seen featuring legendary star Isabelle Huppert.  Not sure whether this is meant as comic satire, or comes anywhere close to what was initially envisioned, but this is about as dull and uninspiring as filmmaking gets, so bad that you actually start laughing at just how bad it is.  Like Björk in Lars von Trier’s DANCING IN THE DARK (2000), Huppert as Liliane is inexplicably working in a factory assembly line, wearing a required smock and hairnet, charged with placing the final decorative touches in a paté factory, mindlessly repeating the same task over and over again from morning to night, breaking out the same homemade sandwich for lunch.  Expecting fellow factory workers to break out into song at any moment, altering the stifling mood, sadly, this is not the case.  Instead, catching a bus to and from work, it’s a dreary life, eating meals alone at home watching TV quiz shows, pouring herself a libation to help pass the time.  A new temp worker alters the routine, Jean Leloup (Kévin Azaïs), a 21-year old still living at home, seen training at a gym in his off hours as a boxer, scheduled to fight a Russian for the lightweight championship.  Sitting next to her at lunch, he notices how she resembles “Laura,” a former Eurovision music contest winner for France who lost to Sweden’s ABBA decades ago.  Claiming a case of mistaken identity, she awkwardly dismisses any similarities.  By chance, he views “Laura” again on television, someone no one could recall on one of the quiz shows, which only confirms his suspicions, refusing to take no for an answer, ambushing her after work the next day, telling her “My father thinks you’re great—and that bugs my mother.” The commotion causes her to miss her bus.   No problem, he offers a ride on his motor scooter, where he’s invited in for a drink, quickly becoming fast friends.

Not really wanting to dredge up the past, Jean’s youthful eagerness and naiveté encourage Liliane to open things up for a sexual liaison, despite a forty year age difference between them. As improbable as this sounds, they barely know each other, yet Jean is head over heels in love, suddenly dedicated to resurrecting her career, asking her to sing at a celebratory party for his father.  She agrees, so long as there is no press coverage.  While the performance itself is all schmaltz, pretty much a karaoke act, it does feature Huppert’s own voice and his father does end up dancing with her, which is like a dream come true for him.  Viewed as a complete success, when Jean returns home to his family late the next morning, his mother figures out where he’s been, finding it all pretty preposterous, while his father is duly impressed.  When a camera crew arrives at work, flooding her with questions about her past, Liliane is done with Jean, feeling betrayed, reviving tabloid stories about her manager/husband running off with all her money, while she “sank into oblivion.”  This was not something she needed to be reminded of and may explain why she drinks.  Apologizing profusely, claiming he had nothing to do with the news team interview, nonetheless she’s back in the headlines.  When Jean is knocked silly in his fight, he abandons his career, claiming he’s not cut out for the ring.  Wondering whether he gives up so easily, Jean immediately jump starts a new career as her manager, showing up in nursing homes, country fairs, or veteran groups, her act is just overwhelmingly amateurish, where every move of her hands is carefully choreographed, without an ounce of spontaneity, seemingly going through the motions.  While Jean is impressed, no one else is, seemingly stalled in the unlikely position of yesterday’s news, not really catching any impetus for starting a new career.  Undeterred, Jean suggests she register for the latest Eurovision contest, like a whirlwind blast of nostalgia from yesteryear.  Not really a Sirkean melodrama from the 50’s, as there’s nothing subversive underneath the surface, or a satriric homage, like Peyton Reed’s DOWN WITH LOVE (2003), this feels more like the simpleminded emptiness of those 50’s movies with Doris Day, where a simple kiss leads to instantaneous love, and an entire life and career are planned from that moment onward, with no actual substance anywhere to be found.

With no character development whatsoever, as neither one has a life, and a storyline for television viewers only, apparently, there is simply nothing here that rises to a level of interest, bogged down in utter artifice and conventionality.   Emboldened by all the attention paid to her by Jean, which makes little sense from such a young guy fighting for a boxing championship, never seen with anyone else his own age, where he seems obsessed by her and oblivious to everything else.  A bit more grounded in reality, and unknown to Jean, Liliane pays a visit to her former flame, Tony Jones (Johan Leysen), still living a life of wealth and luxury, suggesting she’s on a comeback and needs some new songs.  Somewhat impressed in her gumption after all these years, he willingly obliges.  While this should be the centerpiece of the film, a showcase of a rising star, Liliane’s resurgence as “Laura” is fraught with cliché’s, where the insipid lyrics are mindless and laughably suggestive, yet come across as a complete success (with Tony as a judge!), and the audience enchanted, yet this is a dizzying parody on performance, little more than a karaoke show with over-produced music drowning out her voice, where her bizarre hand movements all in synch suggest comic satire, as this kind of kitsch is nearly unwatchable, yet this is done straight, given a sugar-coated glossy coating, dressed up in floodlights.  While she advances to the next round, her success is shared in a little party thrown by Tony backstage that edges Jean out of the picture.  Seeing through the façade, Jean disappears from sight after calling her a traitor and an aging alcoholic.  The bubble has apparently burst.  Steps to retrieve her former manager are all in vain, while her actual voice, heard rehearsing without all the engineering and production, feels amazingly flat, like she can’t carry a tune.  In the finals, Laura is literally on her own, thrown into the spotlight where she lifelessly repeats the exact same song, using the exact same mannerisms, where there isn’t an ounce of authenticity.  Waiting in her dressing room afterwards as other groups perform, she drinks herself into a stupor, only to be called back onstage as the winner for a final rendition, by now completely drunk, unable to walk, falling flat on her face, immediately sent to the hospital for recovery, with Jean, watching intently on the television, racing to meet her there.  Despite the fact Huppert probably took the role due to the ever more unbalanced nature of a screwed-up relationship, presented more like a fractured fairy tale, the repetition of the banal musical themes sound more and more like disco drivel, the kind of stuff you can’t get out of your head, no matter how hard you try.
Posted by Robert Kennedy at 12:06 AM