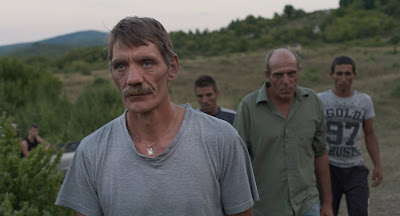 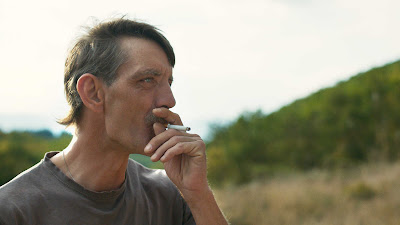 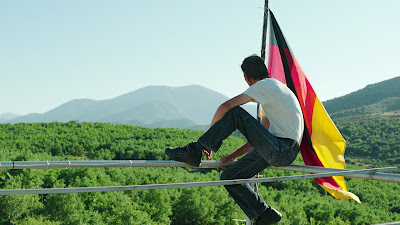 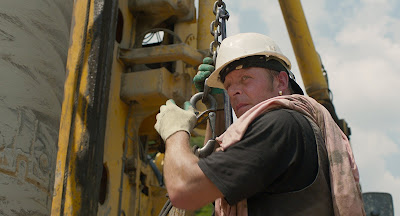 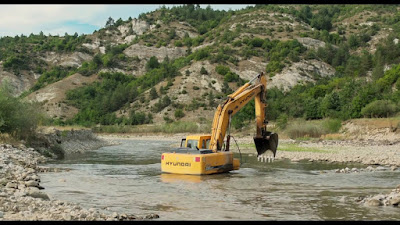 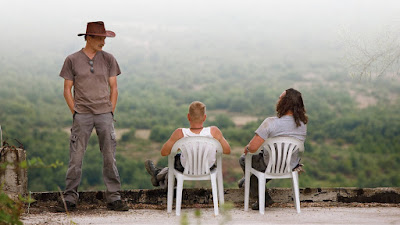 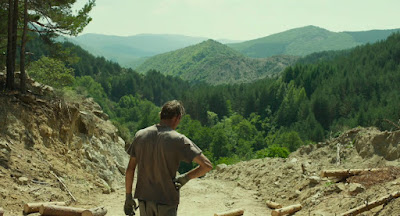 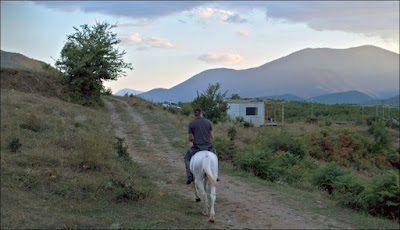 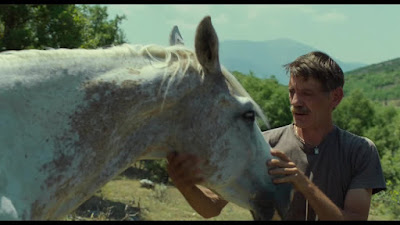 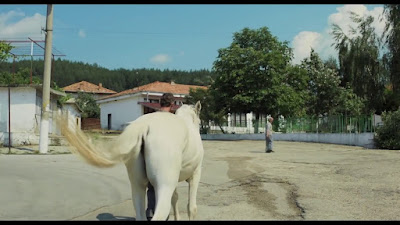 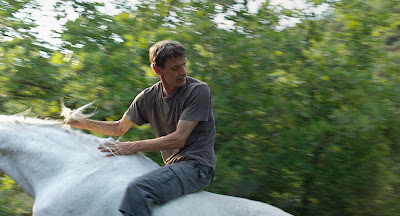 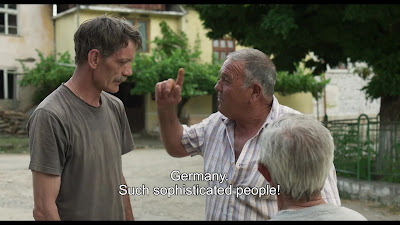 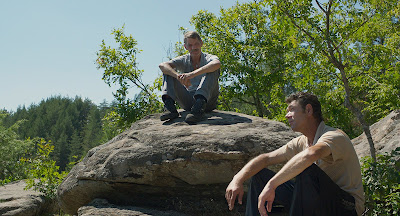 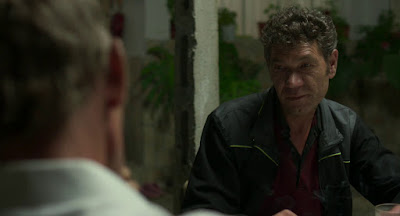 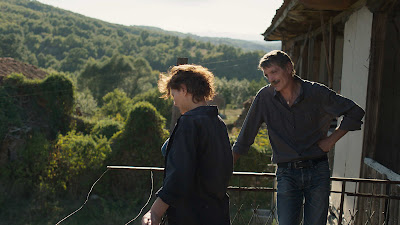 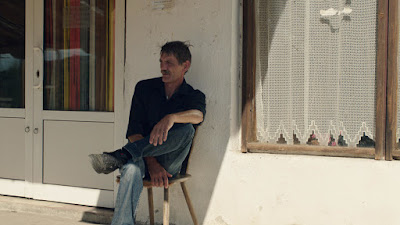 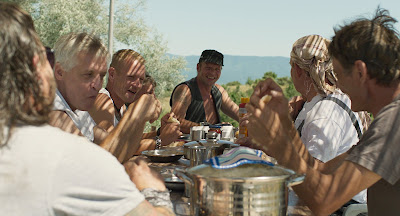 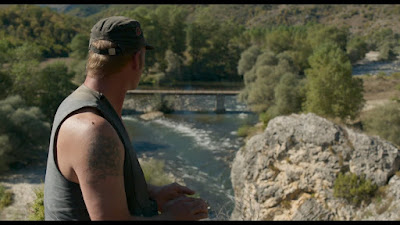 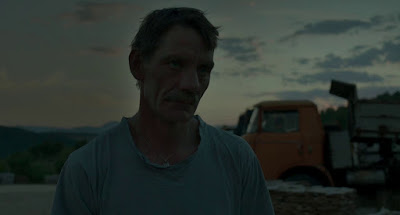 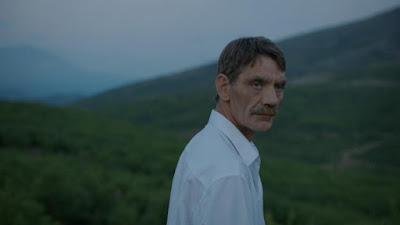 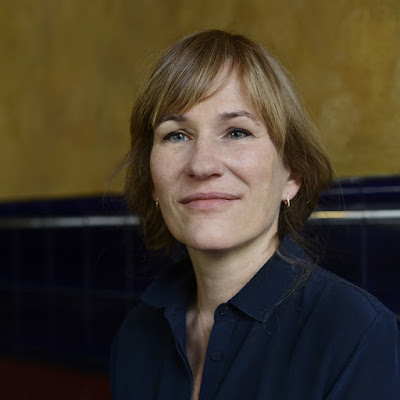 These villages are like time travel.
—Vincent (Reinhardt Wetrek)

While the title might be misleading, German director Valeska Grisebach, from the Berlin school of filmmakers, eleven years since her last film LONGING (2006), takes her camera crew to the unexplored frontier inside Bulgaria and literally immerses herself into a foreign country, which includes the typical feeling out periods, trying to get the lay of the land, approaching the locals, which includes all the difficulties involved with language barriers, but then trying to find a rhythm of life in unexplored territory.  A small crew of German workers are sent abroad into southwest Bulgaria near the Greek border to build a hydroelectric plant in a remote riverside setting, bringing in heavy equipment, establishing a camp outpost that includes electrically lit living quarters for the workers, whose first order of business is raising a German flag to announce their presence, much like a cavalry outpost in the open frontier of the American West.  Often compared to Claire Denis’s beautifully poetic Beau Travail (1999) or Kelly Reichardt’s ode to male disillusionment, Old Joy (2006), other examples of female directors taking aim at exploring the male psyche in a culture of toxic masculinity.  This all-male group provides plenty of brash bravado and trash talking, openly displaying their manhood as a symbol of male arrogance and pride.  When several local women walk down to the river to take a dip, they are rudely harassed by the men, taunted and whistled at, with one of them rescuing a women’s hat from floating downstream, but then refuses to give it back to her, playing a game of keep away, then dunking the woman underwater.  This episode is talked about in town, arousing open hostility against the boorish behavior of the men.  An unusually subtle film in that it slowly meanders into a story, never approaching it head on, appearing to allow things to develop organically, without much intervention, where the filmmaker’s journey into a foreign land becomes the prominent theme of the film.  While some locals are friendly, easy to get to know, others remain more aloof and suspicious, holding long-standing grudges that reflect historical inequities, as Bulgaria was occupied by Germany during the war, where rampant feelings of xenophobia exist on both sides, with a German feeling of superiority being met by hostile locals who would like to bring the high and mighty Germans down a notch.

Shot in a near documentary, social realist style by Bernhard Keller, using a non-professional cast, the film centers on two of the middle-aged German men, Meinhard (Meinhard Neumann, a builder and car mechanic in real-life), a Gary Cooper type who has a tendency to go it alone, an anti-hero embarrassed by the behavior of the group and its openly hostile tendencies, and Vincent (Reinhardt Wetrek, a scaffolder), the de facto leader of the work crew and the one guilty of bullying the girl in the river,  Both offer differing degrees of macho culture, as Vincent is easily more openly aggressive, willing to take matters into his own hands, including morally gray areas, cutting any corners necessary to complete his assigned project, while Meinhard is more passively curious, mingling with the locals, eager to establish friendships outside his work team, having extensive travel experience in his life, but no wife or family, where he’s not rooted to any particular place, but has the freedom to explore the open road.  Meinhard is like a character out of a Fassbinder film, bearing a striking similarity to actor Gottfried John, gaunt features with sad and forlorn eyes on a weather-beaten face that looks like it’s witnessed its fair share of misery.  Because of the extensive language problem, much of the shared time is spent drinking beer and smoking cigarettes, with Germans and Bulgarians speaking their own native language, which viewers can understand through subtitling, but remains an obstacle for each side throughout the film, as only basic concepts can be understood, even with the aid of a lone interpreter from the village who is rarely around.  As a result, plenty remains misunderstood, which remains the focus of underlying tensions and hostility.  Meinhard openly embraces Bulgarian people and their culture, easily mingling among them, where the time he takes to establish trusting relationships is a compelling aspect of the film, particularly the patience required to overcome the language barrier, though it’s surprising that he relates better to the villagers, sharing no common language, than his coworkers.  That doesn’t mean there isn’t an angry reaction to his presence, however, as he’s a German in their midst, an outsider, an interloper, someone who does not belong, where someone will always find a reason to protest his very existence, especially when he becomes friendly with Bulgarian women, with some feeling it is their inherent duty to protect their own women.

Of course, one of the first things to happen is the German flag is mysteriously stolen in the night, creating a me-against-them mentality, suggesting the work crew has unseen adversaries in their midst who protest against their presence.  Instead of alleviating these tensions, sending ambassadors of good will into town explaining their purpose right from the outset, instead they arrogantly assume what they’re doing is for the public good and should be appreciated, claiming “We’re bringing them infrastructure,” like we’re doing them a favor.  This condescension is at the heart of the film, as Germans continually feel they are the dominant culture, that their interests should supersede any local interests, which they believe is a backwater culture, despite its peacefully idyllic natural setting among rolling hills and mountains.  When sharing water rights becomes an issue, rationed between three small villages, Vincent takes matters into his own hands, basically stealing what he needs without asking permission, showing absolute contempt for the little people living in the vicinity, claiming unconditional authority.   In some parts of the world, this would get a bullet through his head, but here the outrage is internalized, with a seething anger spreading as a result, with locals showing outright hostility to anything German.  Meinhard, on the other hand, persistently works to establish open friendships, spending time with anyone who will give him the chance, becoming fast friends with Adrian (Syuleyman Alilov Letifov), the owner of a beautiful white horse he appropriates to make his journey into town a little easier, a symbol of purity and innocence that becomes sullied by nefarious forces, which only inflames the tensions already brewing in such a tenuous relationship.   While Meinhard has more in common with the locals, becoming welcomed and accepted to some degree, which is well earned, but his assumptions about being on friendly terms are put to the test, perhaps thinking he’s closer than he really is, where the film is really a choreography of misunderstandings, expressing an understated poignancy that lasts long after the film has ended.  Produced by Maren Ade, director of the hysterical film 2017 Top Ten List #2 Toni Erdmann, itself a critique of German globalization in Romania, Grisebach draws a stark contrast between the patronizing condescension of the German crew and the Bulgarian locals who are justifiably wary of Germans, whose Nazi occupation plunged the nation into authoritarian rule, becoming part of the Soviet empire until it collapsed in 1989, remaining part of the Eastern bloc that never matched the economic progress with the West, eventually joining the European Union in 2007, though the media, television and radio, continue to be state-controlled.
Posted by Robert Kennedy at 12:01 AM