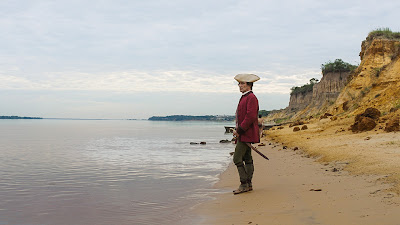 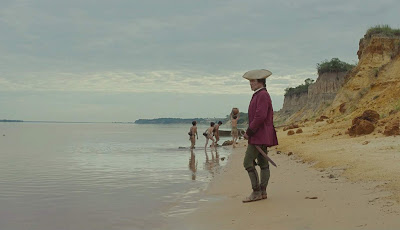 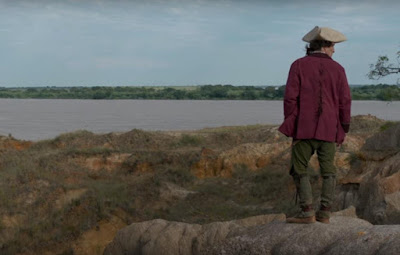 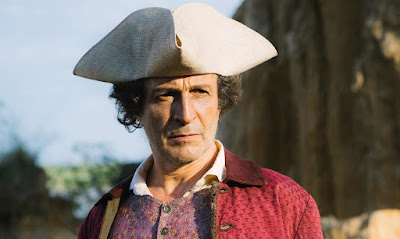 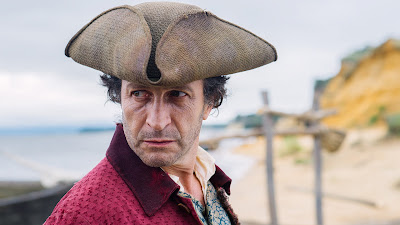 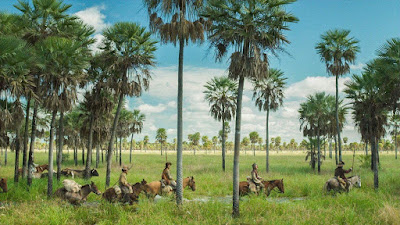 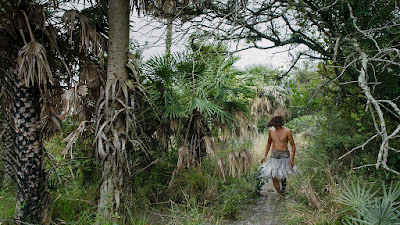 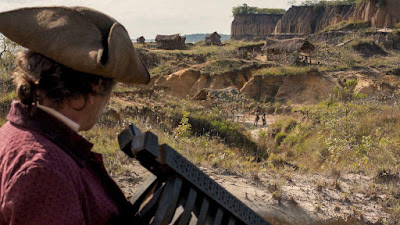 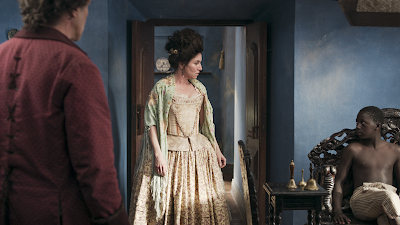 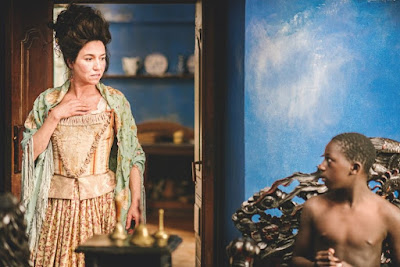 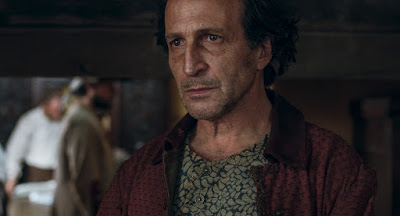 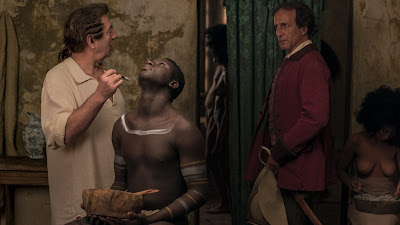 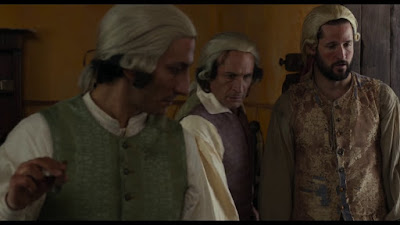 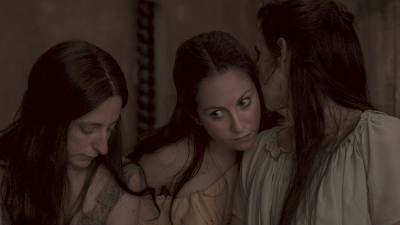 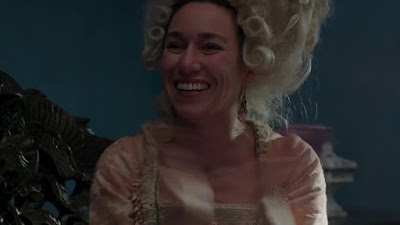 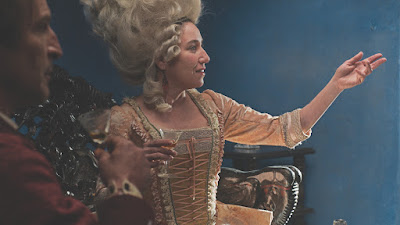 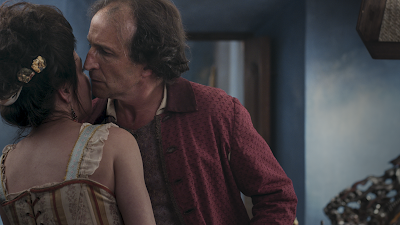 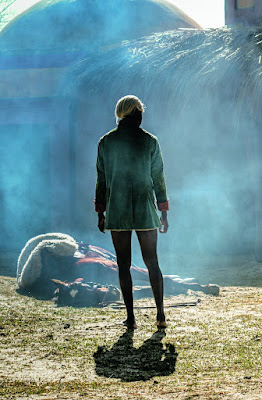 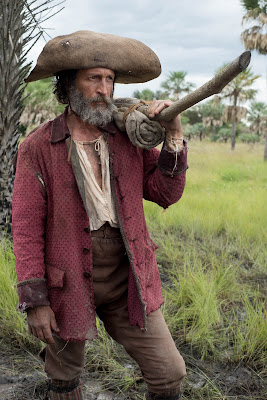 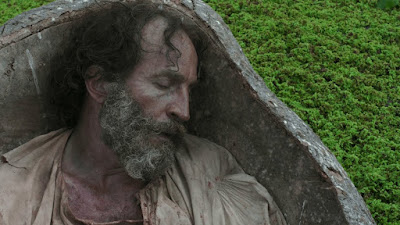 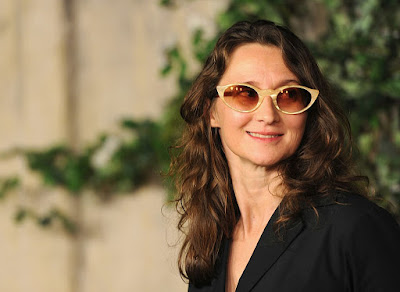 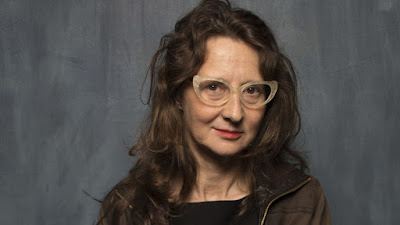 Europe is best remembered by those who were never there.
—Luciana Piñares de Luenga (Lola Dueñas)

Martel’s first film in nine years, bearing more than a passing resemblance to the ostentatiousness of Herzog’s AGUIRRE: THE WRATH OF GOD (1972), this is an oddly mystifying and morbidly detached film about being lost and stuck in time, like a weary time traveler who loses his ability to freely move back in time, feeling somehow forgotten, abandoned, humiliated, and ultimately defeated.  Any plot is superfluous, instead delving into an interior state of mind where every character seems to be speaking directly to you, laughing or shaming you, like taunting voices from a Fellini movie, leaving you helpless, in a state of paralysis, yet seething with each incendiary comment.  Examining the aftereffects of the era of Conquistadors, sent by the King of Spain to vanquish the indigenous Indians and pilfer precious resources, this offers a somewhat comedic look at the so-called civilized stability left behind, seen through a Kafkaesque lens of exaggerated absurdity, where an 18th century Spanish officer, Don Diego de Zama (Daniel Giménez Cacho), is the picture of nobility and success, but also, apparently, a laughingstock to the locals, offering a picture of dignity and reserve that is undermined at every step along the way.  Adapting a 1956 Argentine novel by Antonio di Benedetto, Martel satirizes the myths of noble white privilege and heroicism, challenging the ideas frequently taught in textbooks, offering a less than civilized exposé of colonial times.   Bathed in the pretense of class status, wearing a three-cornered hat and a white wig, Zama holds the prestigious position of a Corregidor, an official appointed by the crown in an oversea empire to represent the interests of Spain, whose duties combined police investigations with judicial powers, while also serving as marriage counselors or trade ambassadors, paving the way for illicit profiteering, allowing a wealthy class to prevail with unhindered access.  While it’s easy to see how they could easily extort money from the profiteers, taking payoffs and bribes, Zama is supposedly above all that, yet his underlings are rewarded for their common failings, transferred to prestigious locations, with recommendations from the crown, while the inscrutable Zama sits and waits for his opportunity.  Set in a backwater village of Asunción in what is now Paraguay, Zama dreams of being transferred to a bigger city where he’ll have more influence, leaving a wife and infant child behind in Spain, believing they might join him, but he sits instead in a state of limbo patiently waiting for the transfer that will never come.

While there’s little involvement with character, yet this is a film that creeps up on you through sheer style alone, where one of the intriguing aspects is the separation of nobility, with all its extravagance, from the rest of the villagers, which includes an indigenous presence as servants.  This social model exists in Argentina even today, with an exclusive middle and upper class that is mostly white and a much larger lower class that is indigenous, where some are deluded enough to believe they are actually Europeans, as that’s the social class they identify with, refusing to accept the indigenous as part of the Argentine community.  Squabbles over land rights have existed for 200 years and are no closer to resolution today, with a ruling class refusing to cede anything to the indigenous people, dominated by a racially tinged superiority complex that suggests supreme arrogance.  Spending a great deal of time inside his head in a collective stream-of-conscious voiceover that becomes a singular identity, Martel transfers a modern era existential viewpoint to the hapless Zama, turning him into a colonial era Marcello Mastroianni from Fellini’s 8½ (1963), literally bombarded by a random series of collective thoughts that may not be his own, that come from a communal Greek Chorus of anonymous villagers, mostly heard but not seen, with Martel utilizing an eccentric sound design (by Guido Berenblum) that is an assault to the senses, whose mere audacity has a way of ridiculing his every move.  Zama is attracted to Spanish noblewoman Luciana (Lola Dueñas), wife of the Treasury Minister who is always on the road, whose sensual physique is the object of his dreams, yet she has him wrapped around her little finger, hilariously remaining flirtatious and coy, using any flimsy excuse to keep him at a distance while continuously sipping exotic brandy (likely a bribe) smuggled in under his watch.  Because the story itself is so preposterous, identifying a mythical enemy as Vicuña Porto, who may be dead, may be alive, or may not exist at all, associated with every evil crime apparently in the last hundred years, where people still fear his presence, despite legendary tales of his demise, with the governor wearing a prized necklace that purportedly includes one of his ears, taken before the scoundrel was burned to death, setting a surreal tone for a whirlwind of continuing misadventures in an otherwise heroic saga like The Three Musketeers or THE SARAGOSSA MANUSCRIPT (1965), where legendary feats are continually stated and restated, yet anything resembling the truth is nowhere to be found.  At least initially, Zama identifies with the virile masculinity associated with these tales, where his name is synonymous with a moral strength of character.

Shot by Portuguese cinematographer Rui Poças, who also shot 2013 Top Ten List #4 Tabu (2012), featuring occasional musical interludes, like Los Indios Tabajaras - Maria Elena - YouTube (3:09), the slow pace and bewilderingly unfathomable aspect of the film has a way of suggesting Zama is sleepwalking his way through time and history, as the period covers ten years, still languishing in the exact same place, with no real prospects that he’ll ever amount to anything more.  In a sign of his growing impotence, one of the more amusing scenes has Zama straining for significance in the corridors of power, where a stray llama on the loose garners much more attention than he does, reducing him to second tier status.  With rampant corruption seemingly the norm, thinking he needs to build some acclaim associated with his name, as if that would garner the King’s attention, Zama joins a rag-tag militia group assigned to eradicate Vicuña Porto from the territory once and for all, expecting they’ll be welcomed back as victorious heroes.  But plans are never what they seem, languishing in the swamps for what seems like an eternity, with each effort leaving them no closer to their goal, his masculinity constantly subverted, becoming ridiculously absurd after a while, humiliated by having their horses taken from them, right from under their noses, becoming utterly demoralized when an indigenous force literally runs circles around them, outmaneuvering them on every flank, comically speeding up the film, making them everywhere all at once, using their own horses to express dominance, leaving them slavish prisoners who are scoffed and laughed at with contemptible derision, revealed to be whimpering cowards.  This excursion into the heart of darkness is mindnumbingly surreal and hard to make sense out of, where the whole idea may only be taking place in his head, as it seems like a boneheaded plan.  Nonetheless, one of the strangest moments occurs when one of his own men identifies himself as Vicuña Porto, mixed in with his own, though cleverly concealing his identity.  While the entire adventure feels like a myth, an Odyssean journey into the unknown, a glimpse into the void, Zama remains powerless to do anything about it, as their dwindling team has been met by superior forces throughout, left in tatters, leaving them vanquished and thoroughly humiliated.  Zama chooses this lowest moment to reveal the identity of Vicuña Porto, thinking he will be captured, but he quickly turns the tables, shown to be a ruthless brute who savagely renders his own form of justice, representative of the same kind of barbaric treatment levelled by the Conquistadors against the Indians.  Thoroughly disgraced and defeated, Zama’s downfall becomes the stuff of legends.
Posted by Robert Kennedy at 12:01 AM