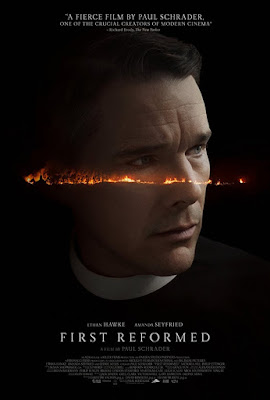 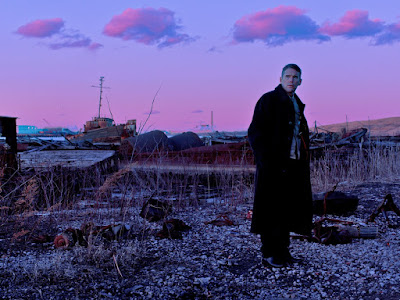 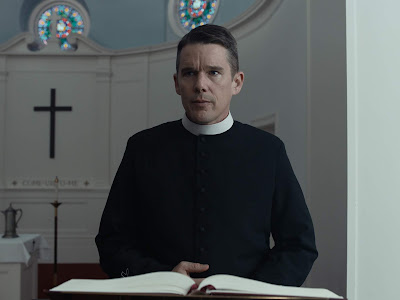 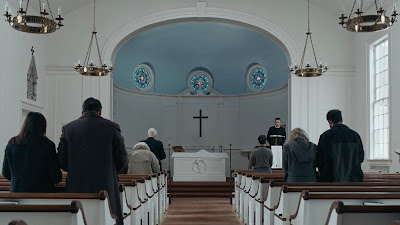 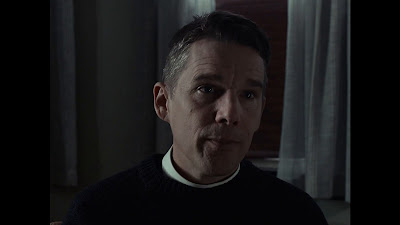 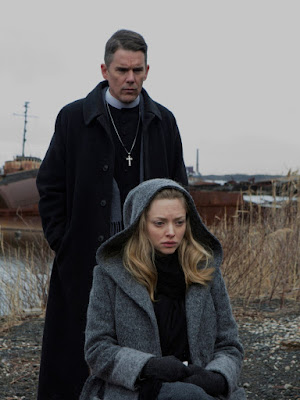 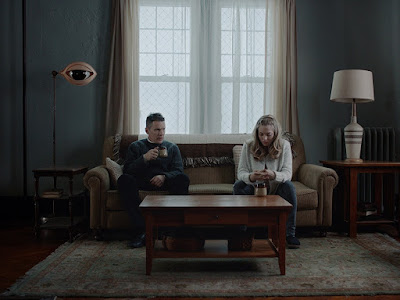 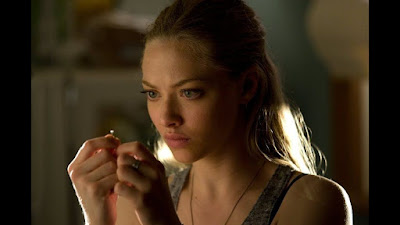 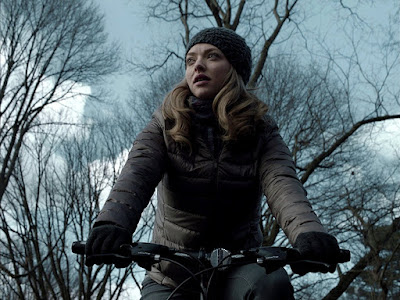 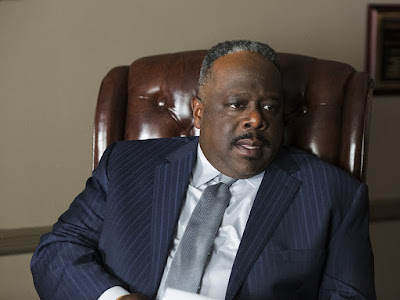 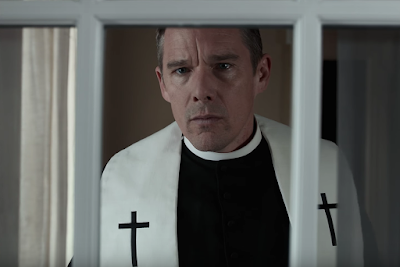 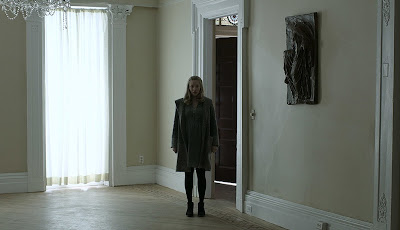 A crisis in faith film, made for people who feel suffocated by an overly repressive church, who prefer, like writer/director Paul Schrader, a tortuous existence, with suffering a stand-in for religious commitment, as if it could wipe away the sins of the world.  Associated with Scorsese as a screenwriter in films like Taxi Driver (1976), RAGING BULL (1980), and THE LAST TEMPTATION OF CHRIST (1988), Schrader grew up attending the Calvinist Christian Reformed Church, never seeing a film until he was in his late teens, early on training to become a minister, where it is significant that roughly three out of 10 Protestant leaders describe their church as “Calvinist or Reformed,” a proportion statistically unchanged from a decade earlier (according to a 2010 Barna poll, So there is no NeoReformed/New Calvinist movement - Patheos).  The Christian Reformed Church is the American embodiment of the original 16th century reformation movement that became necessary as the Catholic Church spawned corruption and failed to respond to its parishioners, examples being widespread corruption among the Catholic clergy, especially at the top, the practice of torturing people suspected of holding non-orthodox beliefs until they confessed or died, encouraging parishioners to pray to Mary and to the saints (instead of Jesus Christ), also church sales pitches, including fake letters from the Pope, that promised heavenly redemption once money was received.  While popular in the Netherlands and Germany, later an American version arose, becoming the Christian Reformed Church (currently 300,000 members in the United States and Canada).  While narratively modeled after Bresson’s Diary of a Country Priest (Journal d'un curé de campagne) (1951) and Bergman’s WINTER LIGHT (1963), the film lacks the sparseness and transcendent poetry, bearing more of a resemblance to Bruno Dumont’s 2010 Top Ten Films of the Year: #5 Hadewijch, as it tries to be a modern parable, complete with contemporary themes, but all in all, it’s overly fatalistic, bearing a gloominess that resembles the tortuous anguish of Scorcese’s Silence (2016).  Ethan Hawke plays Reverend Toller, a pastor with a dwindling congregation at an old Protestant New England parish that’s been around since 1767, part of the Underground Railway, whose historical significance is diminished by being a subsidiary of a much larger modern megachurch.  Leading a solitary existence, giving little thought to his own health or well-being, the film is a morose tale of a despondent priest who grapples with his own existential malaise, himself a former military chaplain, having lost a son in the Iraq War that destroyed his marriage, his road to redemption lies in service to others by practicing his faith, though he’s constantly challenged at every turn, recorded in his yearlong diary, where his bleak inner narration provides the outline of the story, basically a reflection of God’s silence expressed through acute self-loathing, describing an “all-consuming knowledge of the emptiness of all things.”

One of the aspects of neo-Calvinism is a youthful trend of fiery rhetoric that seems rooted by the insular nature of college universities, like think tanks, which have a way of consolidating like-minded thinking, but remain isolated, protecting their inner core while combatting or even condemning outsiders.  This film seems dedicated to the idea of opening up the church to deeply rooted modern era problems that affect us all but seemingly have no answers, which includes ecological nightmare predictions as well as the influence of money in serving the church’s social mission, as the church is often connected to powerful technological interests that may be creating many of the toxic hazards that could diminish or deteriorate any future quality of life.  The church tends to reflect a status quo position, seemingly above the fray, yet may privately be partnering with some of the biggest offenders of toxic waste.  Reverend Toller gets involved in the life of a young married couple at the behest of an ardent believer, Mary (Amanda Seyfried, actually pregnant during the shoot), who is worried about the deteriorating mental state of her non-believing husband Michael (Philip Ettinger), an avowed radical environmentalist who has been arrested, preventing him from continuing to help the cause, losing his faith in the apathy surrounding global consciousness, as there’s little interest in saving the planet, creating nightmare scenarios that he’s all too familiar with, struggling with the notion of losing all hope.  While Reverend Toller makes a genuine attempt to counsel a lost soul, laying the foundation of the internal struggle, “Wisdom is holding two contradictory truths in our mind at the same time: hope and despair,” suggesting despair exists so that God’s hope is that much more meaningful, where overcoming doubt is the real struggle, yet he is himself facing a losing battle with his own inner torment, drinking heavily while eating sparingly, weakened by his own self-inflicted choices, yet carries on to face a new day with revived spiritual interest, as he identifies with Michael’s predicament, himself something of a black sheep among the flock of the devoted, where the parent church, run by Pastor Jeffers (Cedric the Entertainer), couldn’t be more financially successful, viewed throughout the community as a pillar of society.  Exploring the darker regions of society may come naturally for Toller, as he has his own unique familiarity, yet he’s equally as troubled himself, even as he offers guidance and counsel.

The scenes between Toller and Michael form the inner core of the pastor’s dilemma, with Michael asking, “Can God forgive us for what we’ve done to this world?”  While this question reverberates and echoes throughout the rest of the film, their conversation is intriguing but pales in comparison with Steve McQueen’s HUNGER (2008), for instance, a thoroughly complex film that at its center becomes a twenty-minute uninterrupted dramatic scene contemplating the 1981 Irish hunger strike between prison inmate IRA activist Bobby Sands and a Catholic priest arguing the life and death moral implications.  That is a thoroughly riveting first rate drama, while here, perhaps the most surprising scene is a moment of stark cruelty that occurs out of nowhere (there were audible gasps in the audience) between a former husband and wife, with Toller demeaning and humiliating his ex-wife Esther (Victoria Hill) for expressing an interest in his well-being, egotistic actions that undermine all else, calling into question any other motivations he may have.  In other words, what good is it to find forgiveness with God if you can’t forgive your wife?  She’s a member of his flock that needs shepherding as well.  To utterly give up on her equates him with spewing toxic venom, a parallel with the oil and chemical manufacturers who think only of themselves and their own self-term interests and financial gain, all but ignoring the long-term needs of the planet.  The whole thing feels like a moralist trap, a test of absolutism, vying off to explore just a single branch on the tree of sin, yet becoming consumed by the ramifications, clouded by errant judgment, never really seeing the forest through the trees, arguably accepting martyrism as a way out (more short-term speculation), which in the full scope of things only diminishes the overall impact, leaving more to be done by future generations to clean up the mess you left behind.  While Toller’s plan of action remains initially ambiguous, where rational thought turns metaphysical and surreal, with doubts swirling around his head, moving from one possibility to another, with lingering afterthoughts, yet the final implications are clear, whiffing in his moment of truth, coming up empty, ultimately drowning in his own self-pity, lost in the vacuousness of an ethical collapse.  While it’s commendable taking a moral interest in difficult and all-encompassing social positions, similar to Father Daniel Berrigan, a Catholic priest who worked actively in the 60’s against the Vietnam War, putting him on the FBI’s Ten Most Wanted list (eventually  serving two years in prison), the first priest to make the list, yet this film never rises to that level of plausibility, as few American priests ever put themselves on the line like that (unlike the many Baptist pastors in the Civil Rights movement), where the moral convictions would have to be more than mere speculation.  The idea of equating radical environmental activism with extreme religious conviction seems misguided, having more in common with martyrdom and Islamic jihadism along with other radical misadventures that when put into action would only destabilize a polarized public, where democracy requires convincing an otherwise disinterested public about the merits of your argument.  While this film portrays a wayward priest’s struggle with faith and moral servitude, the chosen path convinces no one, basically betraying his own calling, becoming instead an off-the-rails horror story, with the finale set to a raw and bare-bones rendition (sung by Esther) of the hymn “Leaning on the Everlasting Arms,” chillingly recalled being sung by Robert Mitchum as the phony predator priest in The Night of the Hunter (1955).
Posted by Robert Kennedy at 12:04 AM