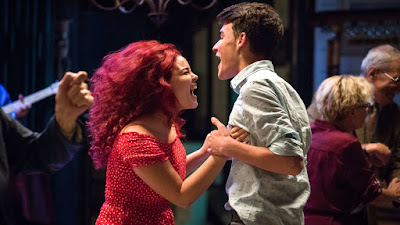 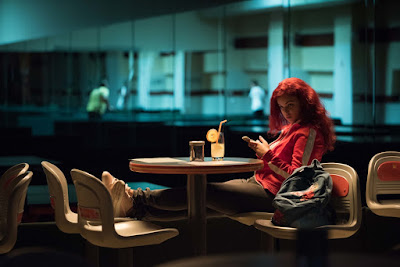 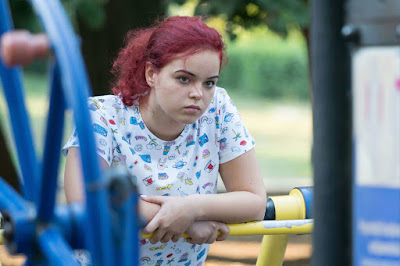 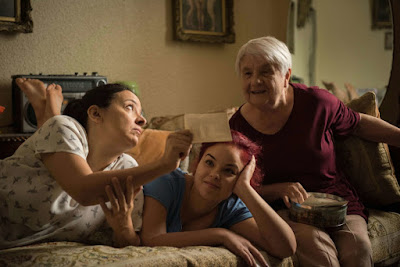 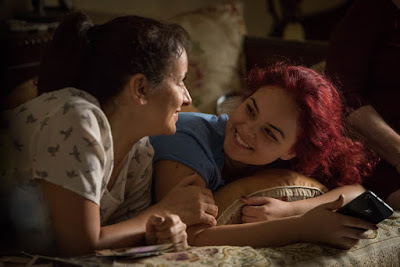 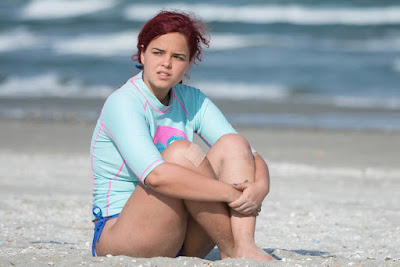 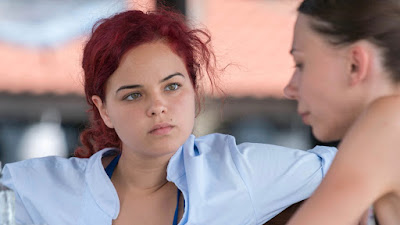 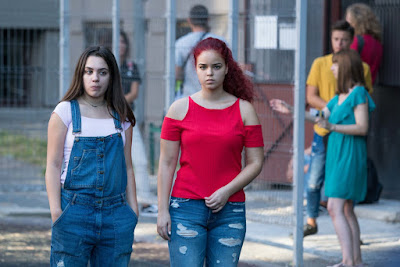 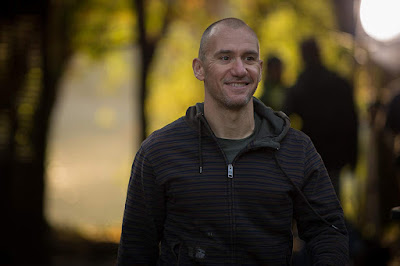 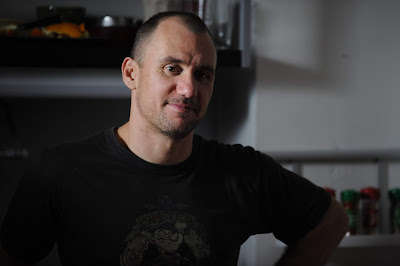 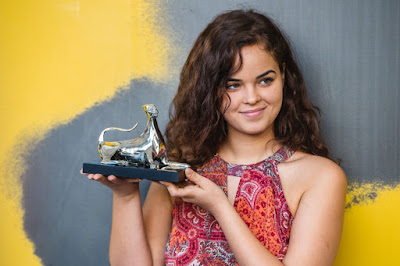 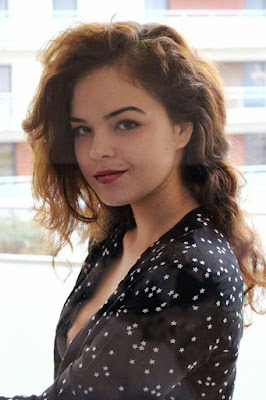 One of the directors associated with the Romanian New Wave which began with Cristi Puiu’s The Death of Mr. Lazarescu (2005), winner of the Un Certain Regard section at Cannes, followed by Cristian Mungiu’s Palme d’Or winning film 4 Months, 3 Weeks, and 2 Days (4 luni, 3 saptamâni si 2 zile) (2007), while Muntean contributed his own brand of social realism with TUESDAY, AFTER CHRISTMAS (2010), a scathing examination of the Romanian middle class which was acclaimed, but never reached the same international status of those earlier films.  The same can be said for this film as well, winner of the Best Actress award at the Locarno Film Festival featuring 18-year old newcomer Andra Guti in the titular role of a fiery 16-year old teenager Alice in flaming red hair who is constantly at odds with her adoptive mother Bogdana (Mihaela Sirbu).  Viewed as something of a problem child, Alice’s world revolves around herself, having a few close-knit friends at school who are tightly connected by the Internet, but basically shutting everyone else out, including her mother, where home life is a scream fest of defiance and disobedience, where her insolence constantly takes center stage.  While the film is not without moments of comedy, it’s curious to feature a lead character who is so unlikable, but her mother is equally cold and tyrannical, though viewers are immediately drawn into their dysfunctional relationship, where the intensity level is off the charts.  Veering into a cinema of discomfort, Alice grows nastier by the minute, lying constantly to her mother, always playing the innocent victim who goes on the rampage against some unforgivable sin, as if the world is always against her, but the truth is she simply wants to do what she wants and couldn’t care less about anybody else.  The relationship with her disapproving stepfather Sorin (Serban Pavlu) is even worse, as he has no tolerance for her childish antics, viewing her as a spoiled brat who needs to be reined in.  Things spiral totally out of control when Bogdana confiscates her cellphone, which is the nucleus of her universe, viewed as essential, the be all and end all of every teenager, as all things stem from that original source.  Rudely flipping through her private emails, finding a message with a stork carrying a baby with the message “bummer” attached, Alice goes berserk when accused of being pregnant, trying to pass it off like some kind of joke with her friends, but Bogdana stands firm, ordering her to take a pregnancy test right in front of her, standing alongside her in the bathroom so there is no room for error, but Alice sabotages the test, flushing it down the toilet before the results can be read.  Rather than go through that ordeal all over again, she finally confesses she is pregnant, but wants to keep the child.  Her mother is flabbergasted, contending she can’t even take a shower without her mother reminding her, so how will she ever take care of a baby.

While Alice is a typically defiant daughter who lives to make her mother’s life a living hell, Bogdana doesn’t really trust what her daughter is saying until she can confirm the pregnancy via an ultrasound test, which then completely changes the landscape, as she grows more sympathetic of the idea of her own daughter having the baby that she could never have herself, allowing her maternal instincts kick in.  Alice, however, takes advantage of every situation that presents itself to her, missing days of school, not really showing much interest in class, feigning illness, then refusing to go to the nurse when directed, putting up such a fuss that a meeting is arranged with the school principal and her mother, with the principal laying out all the complaints from teachers about her daughter, who’s nearly failing in all her classes, barely even bothering to attend school.  Despite the accusations, Bogdana defends her daughter, revealing she’s pregnant and may need to be excused more often, suggesting they simply allow her to leave without objection, so long as she has her mother’s approval.  What follows are mother and daughter shopping sprees buying maternity outfits and a thawing of the deep freeze between them.  Alice’s cavalier attitude never changes, however, especially after the father expresses no interest whatsoever, revealing a secret strategy with her girlfriends of going on the Internet to find ways to abort the pregnancy.  This backhanded approach could easily backfire, but kids think they know it all with the help of social media, though this comes with extreme health risks that she simply ignores.  In typical fashion, Alice extorts money from the baby’s father, Horatiu (Octavian Strunila), but never has any intentions of going to a clinic, taking matters into her own hands, spending as much time away from home as she can, hanging out in the homes of friends when their parents aren’t there, continually thinking it’s no big deal.  Not wanting to live a life where she’s not the center of attention, she takes abortion inducing pills found on the Internet, with uncontrolled bleeding occurring while she’s casually sitting around and watching TV, where this film shies away from nothing, showing an extremely graphic event in real time that is nearly unwatchable, as there is blood everywhere, looking more like a crime scene than a friendly visit, freaking out her friends, where Alice can’t mop it up fast enough, with the feel of the film starting to resemble a war zone.  The searing realism of this moment is the centerpiece of the film, as it’s much more than Alice can handle, yet she and she alone brought this upon herself, putting herself in harm’s way, risking more than she can possibly comprehend.

Putting up a front to her family that she’s still pregnant, Alice continues to live out her carefully constructed lie, even during family events where the extended family is actually quite supportive, suddenly treated like she’s someone special, as heaps of attention are paid to her.   But she continues to go through life without a concern in the world, routinely bullying others with her quick temper, showing little interest in her own future.  The camera, however, follows her wherever she goes, where she is the focus of the film throughout, becoming tedious after a while as she remains clueless, displaying abhorrent and mischievous behavior, where she’s simply on a road to nowhere.  In a Romanian film, a loathsome child who is such a hellraiser reflects upon the transition from communism to capitalism, where her fierce independent streak goes largely unchecked, eventually running amok, which is a sign of the recklessness and shocking irresponsibility of this new generation.  Still, her mother warmly reaches out to her, spending an afternoon at the beach, something Alice always wanted to do, but they never had time for, moving from the busy street scenes of Bucharest to the more tranquil shores of the coast, adding a touch of serene calmness.  But it’s short-lived, as they’re soon back in the rat race, where Guti is terrific as Alice, easily capturing the ever-shifting mood swings of a teenager, sullen and rebellious one moment, a manipulating shrew in another, and even pleasant company when all her worries disappear, yet this is an unflinching character study of a typical family dilemma that goes back generations, reflecting a welfare state in transition that can’t seem to find the proper balance between the old and the new.  Unable to view the Ceaușescu years without outrage and harsh negative criticism, this effectively eliminates a nation’s recent past, all but wiping out any respect for an entire generation, followed by an offspring hooked on social media with too much self-centered freedom that leads to a complete disregard for the consequences of their behavior.  Accordingly, Alice continually tries to put off her next scheduled medical visit, but when that day finally arises, the results are devastating, closing the film in abject turmoil, where the promise of a future never arrives.  Less minimalist than previous Romanian films, though featuring the long, static shots that are a hallmark of the nation’s film culture, this is nonetheless a probing drama with an almost brutal look at life in Eastern Europe, challenging viewers to identify with this young subject, as she exists without a past or even a future, living only in the present, in a state of limbo, unable to navigate her way out of this existential void that represents the struggles of everyday life.
Posted by Robert Kennedy at 12:03 AM