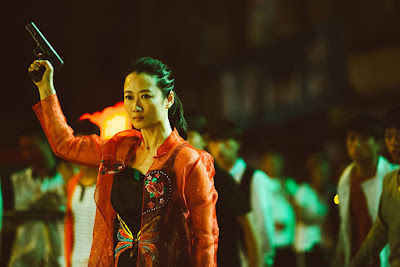 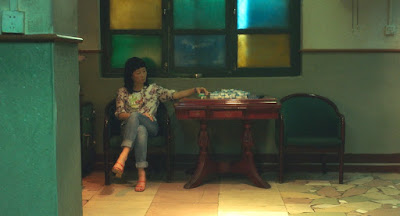 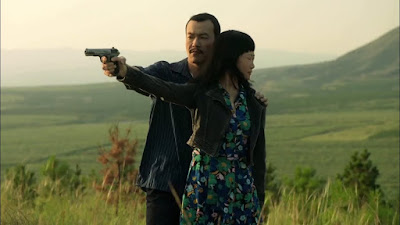 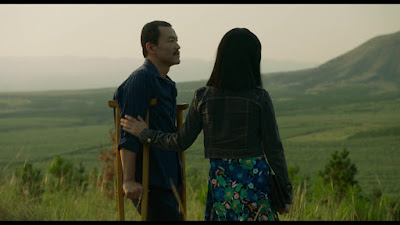 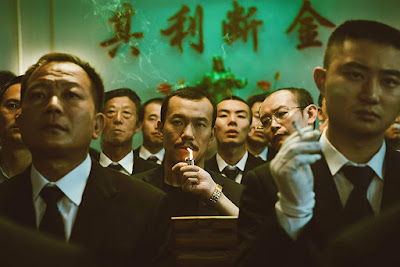 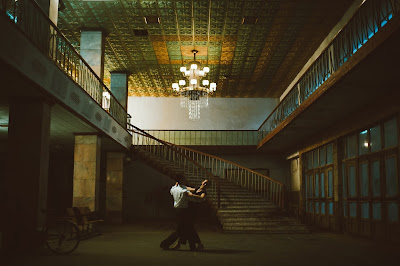 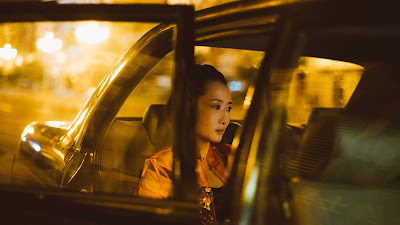 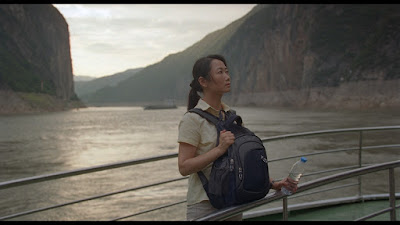 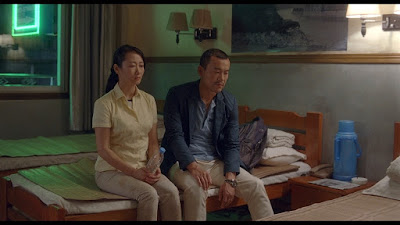 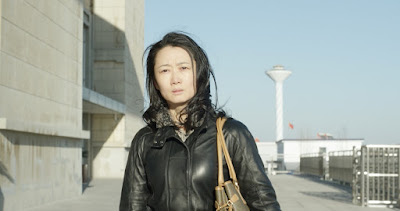 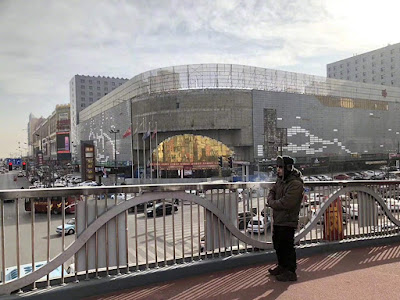 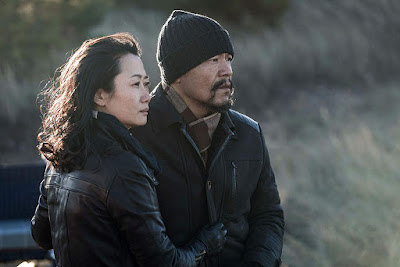 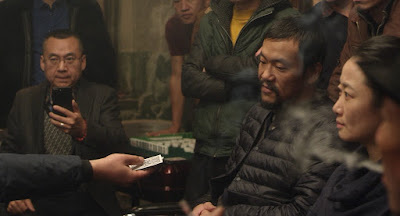 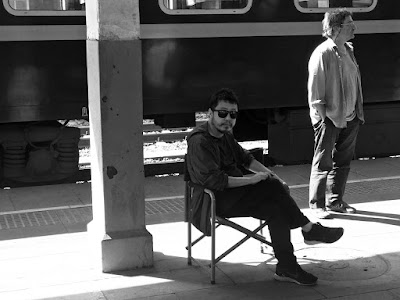 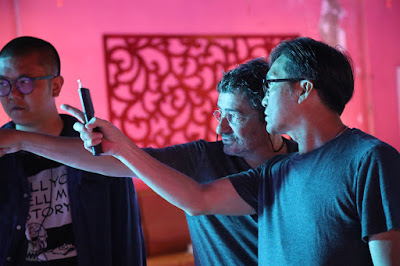 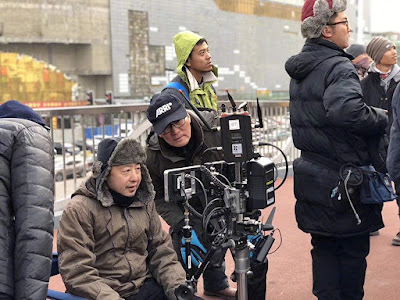 Jia Zhang-ke on the set 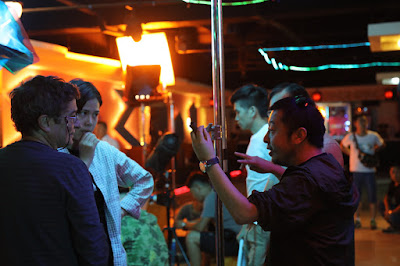 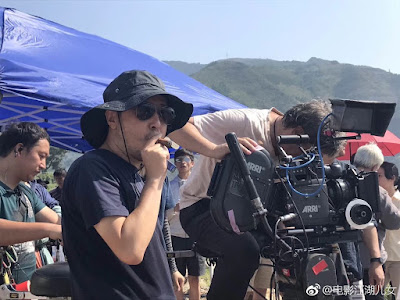 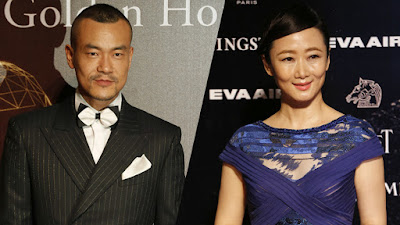 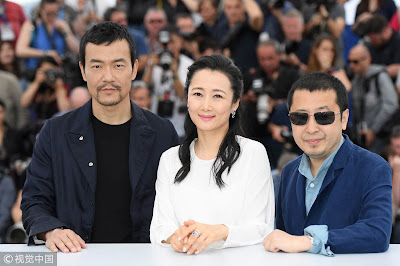 Jia with his two lead actors 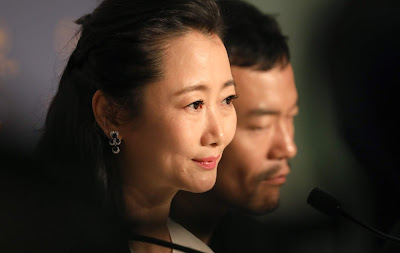 An inflated Hollywood melodrama in the style of George Stevens’ GIANT (1956) or Douglas Sirk’s MAGNIFICENT OBSESSION (1954), featuring sumptuously beautiful cinematography from Eric Gautier, who has worked regularly with French directors Assayas, Desplechin and Resnais, shooting much of it on film instead of digitally (including the entire 2nd part), and enthralling music from Hou Hsiao-hsein’s musical composer Lim Giong, where especially effective is the punctuating pounding of drums that add emphasis to the developing storyline.  Also of interest, several noted Chinese directors play small roles in the film, mostly as heavies, including Zhang Yibai, Diao Yinan, Xu Zheng, while Feng Xiaogang plays a physician, though his part was cut from the film in the recent release in China, no doubt due to the controversy surrounding actress Fan Bingbing, as he allegedly helped her hide part of her income in a brewing tax scandal where she allegedly owes $129 million dollars.  As a director known for chronicling the rapidly changing face of China as it transforms into the 21st century, this film eschews all that with a nostalgic tale that looks backwards into the past, covering nearly two decades, like a throwback to the Hong Kong triad movies of John Woo or Johnny To, featuring the title song from Woo’s THE KILLER (1989), The Killer - Main Theme (Sally Yeh) - YouTube (3:06), creating an epic gangland drama once again told in three parts.  It has the look of the most expensive budget Jia has ever had to work with, and while it’s beautifully executed, it lacks some of the emotional authenticity of his earlier films, like his much more intimate 2015 Top Ten List #2 Mountains May Depart (Shan he gu ren) or the biting criticism charting the effects of dehumanization in 2013 Top Ten List #3 A Touch of Sin (Tian zhu ding).  Featuring a slew of complex characters in the small town setting of Datong, the backdrop of UNKNOWN PLEASURES (2002), located in the northern Shanxi Province where Jia was born and where he shoots almost all his films, it opens in the criminal underworld of the jianghu in 2001, with Zhao Tao in PULP FICTION style bangs as the strong-willed, quick-witted young Qiao, a noirish femme fatale who seems to have the world at her feet and may be the brains behind the operation, madly in love with her mobster boyfriend, Bin, Liao Fan from Black Coal, Thin Ice (Bai ri yan huo) (2014), Datong’s crime boss who runs the gaming tables, where another extraordinary set piece simply dazzles the audience, a party celebration saturated in red set to the music of the Village People’s “YMCA,” reflective of the disco era with bare-chested men showing off their dragon tattoos, with the almost taunting lyrics, “Young man, there’s a place you can go.”  While Qiao accommodates all the guests, she slips into the backroom where a high stakes game of mahjong is taking place, with Bin presiding over his underlings, but spends a few speculative moments with financial backers considering areas of expansion, as investment opportunities are seemingly limitless, ASH IS PUREST WHITE Clip | TIFF 2018  YouTube (1:07), with both of them throwing money around afterwards like it’s nothing.  One of the more peculiar aspects is a famous ballroom dance couple who perform at all special occasions, even funerals, at the behest of Bin, who lords over his kingdom like a mafia boss.

Qiao seems to have risen to the top by owning and operating coal mines, where the man voicing the loudest condemnation of protest against her turns out to be her father, but the economic tides shift, as the closure of mines in the region result in workers being sent away into the far ends of China.  Bin’s rule is also challenged by a couple of young thugs who club his shins, making it difficult for him to walk, showing them leniency, not really viewing them as a threat.  What follows however, as they are on a tour viewing their investment property, their car is intercepted by a group on motorbikes, stopping them by the time they reach town, surrounded by a gang of thirty or more who start pounding on the car.  First the driver and then Bin get out to smash a few of them before they are overwhelmed by an angry mob, a brutally violent fight scene where they have the intent to kick him to death, but Qiao gets out and fires a few rounds from Bin’s revolver, putting an end to the shock and mayhem.  This incident reverses the roles of Bin and Qiao and changes their relationship forever.  In the next scene she is in prison being interrogated about how she obtained the gun, refusing to place the blame on Bin, so she takes the fall, resulting in a 5-year sentence, while Bin himself was released a year earlier.  But once she’s released, there’s no greeting party, as she’s forced to find her way back home, which includes scamming local businessmen for some quick cash, among the cleverest scenes of the film, simply exuding personality and verve, seen traveling through the Hubei Province where the Three Gorges Dam on the Yangtze River is located, the most powerful hydroelectric plant in the world, built between 2006 and 2009, causing water levels on existing towns to rise and completely submerge the towns underwater, where they are still at the midway point, resulting in the displacement of 1.5 million people, the subject of Jia’s majestic film STILL LIFE (2006).  Bin’s new home is near the dam, but he’s ignoring Qiao’s calls, supposedly with a new girlfriend, so she goes to great lengths to draw him out, cleverly creating a diversion so he appears unexpectedly, meeting in a nondescript hotel room, all captured in a single take, as their changed personas merge, where he seems to be a changed man, completely humbled by prison and his fall from grace, no longer showing an ounce of ambition.  While she’s willing to lift him up and start over, claiming “I’ve been living as a jianghu just to find you.”  “Am I that important?” he counters. “If not that, then what is?”   Bin basically disappears into the night without a whimper, a devastating moment of surrender.  Finding herself back on the train, she meets someone who may change her life, who bravely announces, “We’re all prisoners of this world,” but he only leads her to the outer regions of the Gobi Desert, talking a good game with little show for it.  As she travels across the country, however, buildings spring up everywhere, showing a rapid transition to new technology, but floods of people are still trying to eke out a living.

Among the more interesting scenes are the mix of ordinary families and working class faces on the trains, many lost in solitude, seen smoking relentlessly until they reach their next destination, a mirror image of the opening shot with Qiao in a sea of faces on a crowded bus, scenes that recall Jia’s very first feature, THE PICKPOCKET (Xiao Wu) in 1997, shot on 16mm for about $50,000.  While the first two sections are in summer, the final third is set ten years later during the frigid winter celebrating the New Year of 2018, becoming slower in pace as the film progresses, as Qiao finds herself back in her life in Datong, running the same old gambling house, reigning over the others who haven’t changed a bit, as it’s the same clientele, but a more meager and ordinary existence, with Bin in a wheelchair from a stroke caused by excessive drinking, hardly recognizable by his own brothers, subject to new taunts and humiliation due to his physical limitations, which only leave him embittered and demoralized.  By contrast, Qiao has reassumed her natural identity as a leader in charge, showing fortitude and staying power, able to adapt and survive in the changing winds, while Bin has been crippled by the ordeal.  While Qiao silently looks after him, she also finds a doctor who works to rehab his ability to walk, a painstakingly slow process requiring a lot of work, but he steadily improves.  In this film men are inevitably corrupt and bankrupt, where the excessively violent macho films of the 80’s or 90’s may have inadvertently led to false impressions, a misjudged view of strength, always replacing the old with the new, a viciously repeating cycle reflected by the up and down economic cycles of the nation, as each inconstant vision is replaced by a new vision that will likely falter as well, where there’s a tendency that what’s built at some point must be rebuilt, as it will inevitably wear or be torn down, replaced by something new.  This could just as easily be the same reality for crime bosses under the jianghu code, as their rise is always followed by an inevitable fall, where they are constantly being replaced.  Qiao, on the other hand, in a feminist take on the women of China who bear the strongest burdens and do the bulk of the work, are viewed as a dependable and reliable force not corrupted by time or change, outlasting the flash and burn life cycles of the men, as evidenced by the half-built sports arena that has finally come to Datong, or the railroad station that is all steel and glass, a vision of something shiny and new, where its time will also come.  Commenting on a dormant volcano seen earlier in the film, Qiao quizzically notes, “Something that burns so much is more pure.”  This may be a metaphor for the female-dominated engine the drives China, outlasting all social experiments as the driving force behind a more stabilized nation, as women may be the unseen face on the country.  In many ways this film feels like the summation of an entire career up to this point, continually referencing earlier films, emphatically repeating himself, something we’re simply not used to seeing from this director.
Posted by Robert Kennedy at 12:21 AM