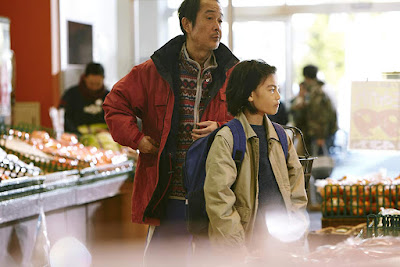 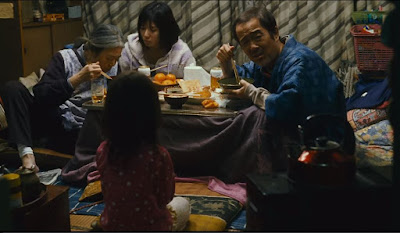 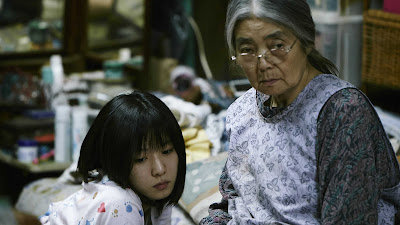 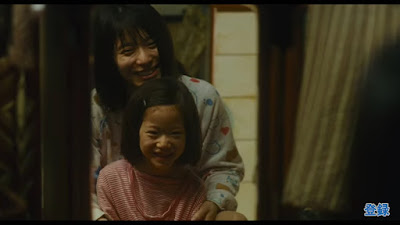 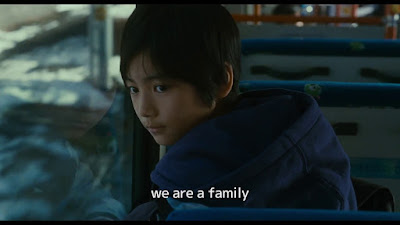 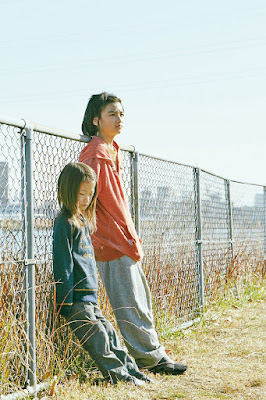 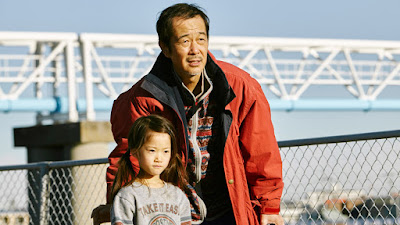 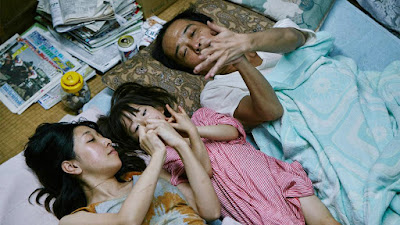 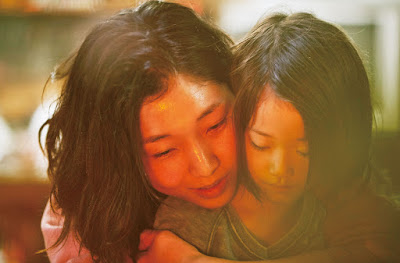 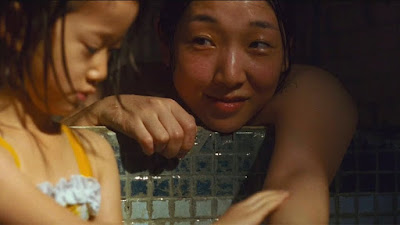 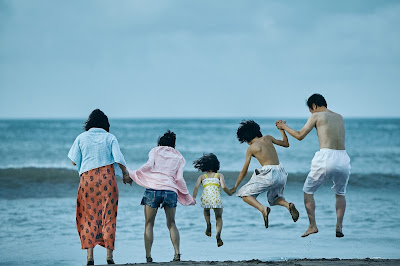 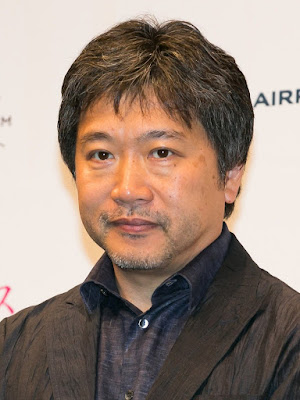 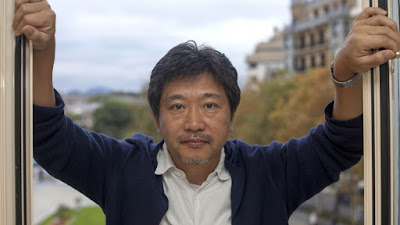 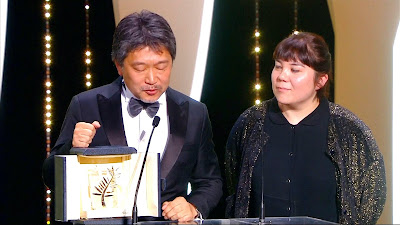 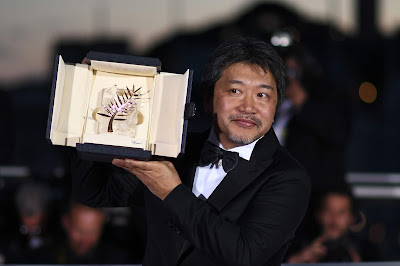 Unlike the first films made by this director that all felt so uniquely different, never knowing what to expect, believing this was one of the greatest filmmakers alive at that point, his more recent films since STILL WALKING (2008) like I Wish (Kiseki) (2011), Like Father, Like Son (Soshite Chichi Ni Naru) (2013), or After the Storm (Umi yori mo mada fukaku) (2016) have all felt like more traditional versions of the same film, as every single film feels like a traditional Ozu-like family drama veering towards the saccharine quality of Spielberg.  Winner of the Palme d’Or (1st place) at Cannes in the director’s sixth appearance there, Jury president Cate Blanchett explained to the press, “It was one of the quietest, loveliest and most emotionally enduring films in the competition.”  What separates this from his more recent films is the quality of the writing, which is absolutely superb, one of Koreeda’s better screenplays, compassionate and socially conscious to the core, where the conversational flow feels totally genuine and authentic, filled with warmth and affection, even though the focus of the film is on a dysfunctional family of social outcasts.  Perhaps even more surprising, it feels like a family reunion of the parentless kids from NOBODY KNOWS (2004), as if they have reunited again after the passage of years, as we haven’t seen this kind of social realism since that film more than a decade ago, both similarly inspired by local news stories.  Without providing a backstory, viewers are introduced to the family in midstream, as we see the middle-aged father figure, Osamu (Lily Franky), in a carefully choreographed shoplifting sequence with a young boy, Shota (Jyo Kairi), all playfully shown with hand signals suggesting a little ingenuity goes a long way, particularly in such a conformist-oriented society where behavior is uniform.  As they view their booty afterwards, as if on a pirate expedition, they have reason to celebrate, sharing what they’ve gathered in their tiny, claustrophobic home, squeezing five into what appears to be one room, including Osamu’s partner-in-crime/wife, Nobuyo (Sakura Andô, an absolute treasure and the true heart of this film, the kind of weighty character that’s been missing from recent Koreeda films), a college aged adult sister-in-law Aki (Mayu Matsuoka), and an elderly grandmother Hatsue (Kirin Kiki).  Over time we realize none of them are related, but have instead come together by choice, defying the traditional family unit, deciding this best meets their needs, developing a happy equilibrium, as they routinely joke and tease one another in a good-hearted manner, making each one feel appreciated.  Returning home in the cold one wintry night, the father and son combo notice a 5-year old girl seemingly abandoned, alone in the cold on an outdoor balcony while her parents are yelling and screaming at one another in an endless fight, with the mother suggesting she never wanted a child, and neither did he, both completely disinterested in her welfare, so they simply take the child home with them.  She turns out to be Yuri (Miyu Sasaki), perhaps the unsung star of the show, astonishing in her range, exhibiting once again that Koreeda is simply an uncanny director of children.

While they thoroughly intend to return her back home after a warm family meal, they don’t realize the full extent of her abuse until they notice scars on both arms, suggesting maybe it’s better if she spends the night, only to discover she’s a bed wetter, all the more reason to sympathize with her.  Weeks go by and the family hasn’t even reported the girl missing, so their rather goofy, self-fulfilling philosophy becomes, “It’s not really kidnapping if you don’t ask for a ransom.”  Unlike the father and son in Kurosawa’s underrated DODES’KA DEN (1970) living on the margins of society in the empty shell of a rusted out car, this is not a depiction of miserablism, instead theft feels like part of a daily routine to supplement their meager income, revealing how easily people adapt to their shortcomings, perhaps influenced by the Japanese Recession where for years the economy has been in a downward spiral.  In this rousing Three Musketeer “one for all, and all for one” philosophy, where all collectively contribute, Osamu occasionally works day labor jobs on a construction site, Nobuyo works in an industrial laundry, pilfering what she can from what’s left in pockets, while Aki does soft-core porn shows that seem right out of Paris, Texas (1984), giggling how much attention she gets just by showing a side boob, while Yuri joins Shota on shoplifting excursions, though their tactics are so lame that one of the corner store owners simply hands them a few items, urging Shota not to teach his little sister how to steal.  While Yuri is used to apologizing for everything, as if everything bad that happens is all her fault, they quickly rid her of that habit, claiming there’s no need, with Nobuyo explaining that families who love each other don’t hit, wrapping her arms around her head and holding her, suggesting they do this, which is a momentous moment in the young girl’s life, as it’s obviously the very first time anyone’s ever showed her affection.  What makes them a family is that they actually enjoy each other’s company and share experiences, where each willingly sacrifices for the others without hesitation.  And while Shota has a little trouble sharing excursions with her that were formerly father and son occasions, he pouts for a while, but gets over it, especially when he understands that they all have to look out for each other, as that is the tie that binds, as they’re stronger as a family than all alone on their own.  Grandmother illegally drawing her pension from her deceased husband is the only reliable source of income, which she herself supplements by visiting his family from time to time, which always gives her a little something extra.  There’s no room to spare in their little bungalow, with Shota sleeping in a closet, and everyone else bundled together on the floor, nice and snug.

Television reports finally announce Yuri as missing, so they cut her hair and give her a new look, even call her by a new name, Rin, but have no intention of returning her back to a family that doesn’t want her.  Aki expresses an interest in how Osamu and Nobuyo came together, thinking it was probably over money, but is surprised to learn it was a matter of their hearts, which makes her rethink her own occupation and developing a better rapport with her clients.  This cues a key love scene between Osamu and Nobuyo that couldn’t be more flattering to them both, especially Nobuyo’s down to earth style, as both are surprised they’ve still got it, preening like proud peacocks afterwards, spirits elevated, as if rejuvenated.  The entire group spends an afternoon at the beach cavorting in the water and having fun, yet Granny takes a moment to remark upon the beauty of Nobuyo’s face while joyfully thanking them all for granting her wish to never die alone.  To capture the warmth the director was looking for, cinematographer Ryûto Kondô shot the film on 35mm, which does wonders for the look of the film, offering a softer sheen and more pronounced colors.  After the sunny moment of the family outing, they discover Granny died in the night, which seems to alter the family dynamic, as it’s never the same afterwards.  Quickly covering their tracks, they resume to normalcy, but it seems more half-hearted, lacking the necessary precautions, as Shota is caught stealing a bag of oranges, with the police catching up to him.  Their cover exposed, all are arrested, making headline news, as the stark shift in tone observes some of the interrogation scenes, as the world judges them from a criminal perspective, blaming them for kidnapping and for their lifestyle of petty crime, shown through a near documentary lens, where all the cute familiarity has been ripped away, replaced by dour confessions and a great deal of humility, as it’s impossible for the police to comprehend what they did was anything but wrong.  The hard edge of exposure is difficult, as the audience knows them in a way the investigating officials don’t, so a little of us dies right along with them as they face the consequences.  Surprisingly, Nobuyo takes the fall for all of them, assuming total responsibility, getting five years in jail, where her eloquent prison monologue is nothing less than stunning, one of the most powerful scenes Koreeda has ever written, where few could pull it off with the ease and dexterity of Andô.  The film concludes with what could be multiple endings, showing a brief postscript of life returning to normal, but the final shot is devastating, as Yuri has been returned to her abusive mother, once again getting blamed and ordered to say she’s sorry, where that blank look on her face conveys complete and utter surprise, yet she is totally imprisoned with no way out, looking out over the balcony at the world of possibilities she will miss.
Posted by Robert Kennedy at 12:04 AM