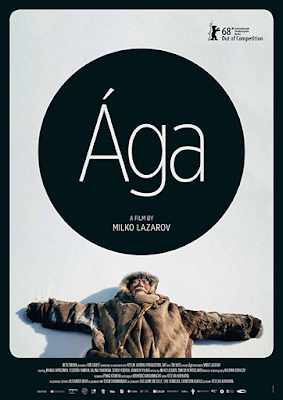 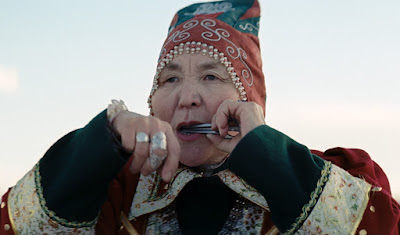 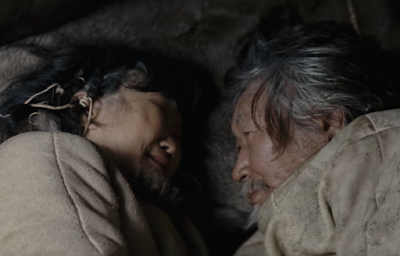 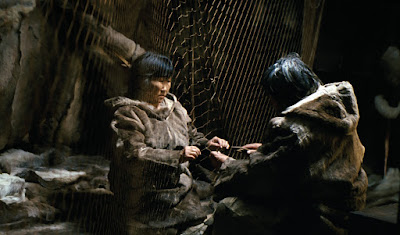 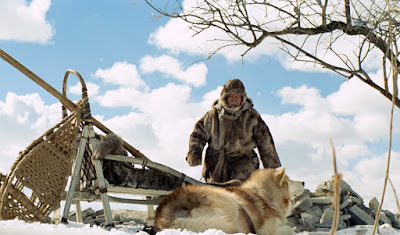 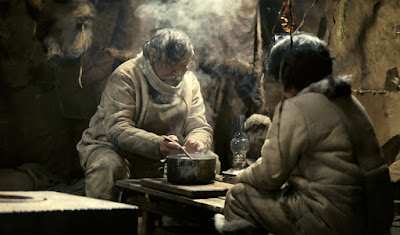 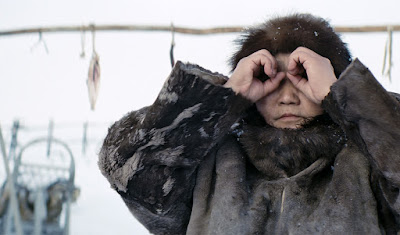 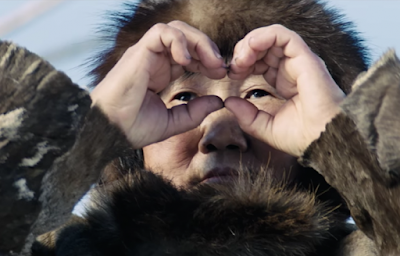 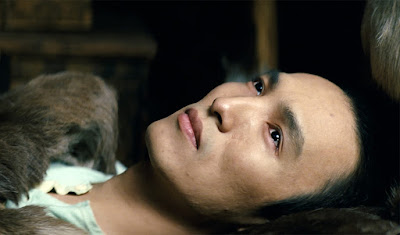 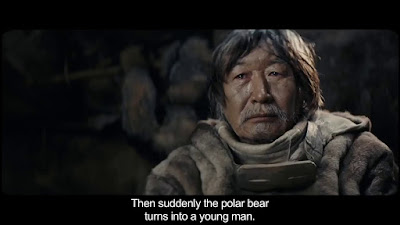 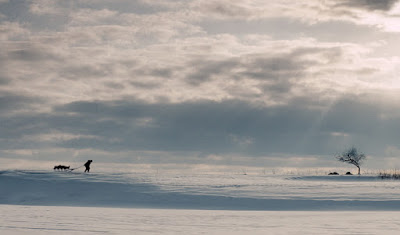 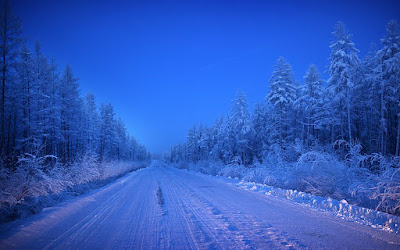 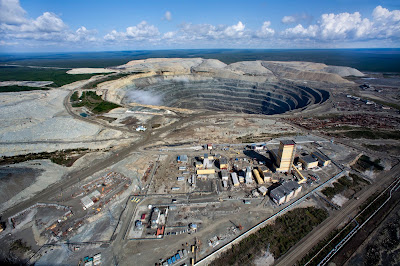 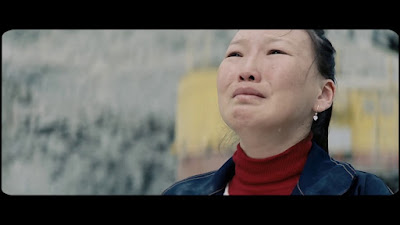 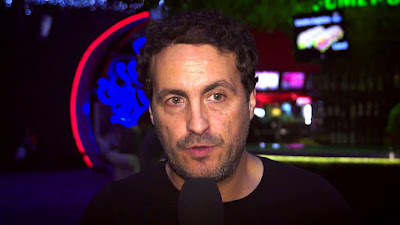 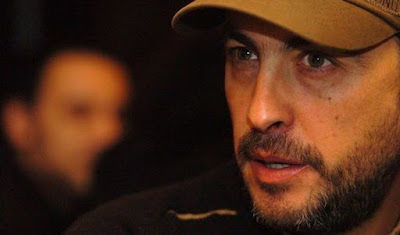 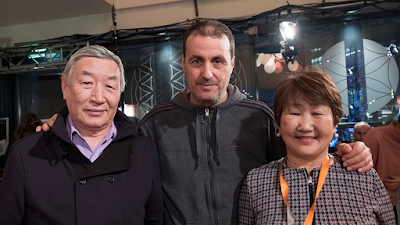 The director with his leads, Mikhail Aprosimov (left) and Feodosia Ivanova 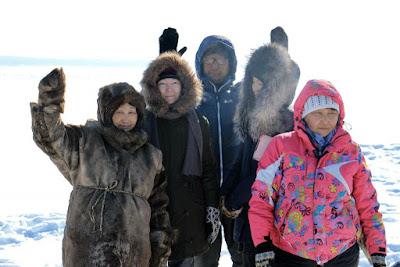 The Arctic cast and crew

Sort of a companion piece to Québécois filmmaker François Jacob’s A Moon of Nickel and Ice (2017) which took viewers to the ends of the earth, showing life in the small town of Norilsk, Siberia, the northernmost city on earth, built by Gulag prison camps dating back to 1935 as slave labor working the nickel mines which run 24/hours a day, as this eye-opening film takes place in the frozen tundra of Yakutia in Russia (officially called the Sakha Republic), one of the most remote regions on earth, where a lone road (built by Gulag inmates, many of whom died in the process) travels 1200 miles to the Pacific Ocean, but is only traversable in winter when the rivers freeze over, with no year-round transport connection to 90% of the region, where 40% of the territory lies within the Arctic Circle and winter lasts 8 to 9 months, with spring and fall basically eliminated.  While it is home to Russia’s largest diamond mines, responsible for a fifth of the world’s production of diamonds, with Yakut diamonds bringing a much higher price than other regions, where a quarter of the world’s high-quality diamonds are extracted, leaving behind an immeasurable toll on the environment, it is also home to the Yakuts, who are the indigenous people living in northeast Siberia who live far away from the cities, populated today by about 400,000 Yakuts who breed reindeer, trap fur, fish, and raise horses and cattle.  It is their culture and nomadic lifestyle that this film explores, with Bulgarian writer/director Milko Lazarov crafting a fictional almost mythological story of ice and isolation in the frozen expanse of one of the coldest regions on earth, where the lowest recorded temperature was −83.9F (−64.4C) while the highest was 101.1F (38.4C), with locals warning against wearing eye-glasses outdoors in the winter.  Paying tribute to Flaherty’s NANOOK OF THE NORTH (1922), which explored the lives of the indigenous Inuit people of Canada’s northern Québec region, this film follows Nanook (Mikhail Aprosimov) and his wife Sedna (Feodosia Ivanova), who live in a yurt tethered to the snow-covered ground that allows them to move around during the changing seasons, living off the land, ice-fishing, trapping small animals, or following the habitat of reindeer and migrating fish.  While Nanook is the hunter and provider, he travels on a sled led by a single dog across the icy landscape, viewed as a solitary endeavor of one man against the elements.

Opening with an old woman dressed in a colorfully ornate costume playing an indigenous song on a khomus, or Jews harp, viewers are inclined to clap afterwards, as that’s the way the opening is framed, as if she’s giving a performance.  This immediately reminds viewers that we’re watching a staged movie, that it’s not a documentary, though it resembles one, following the daily rituals and routines of an aging indigenous couple, chronicling life in the wilderness as they survive on the land even in this inhospitable terrain.  During the winter, Nanook takes his dog sled to nearby rivers, carving out an ice hole and fishes for their daily meals, while Sedna prepares the meals or sings to him, cutting his beard and hair with a knife, telling each other mythical tales or dreams afterwards, surviving much like their elders.  But they are a dying breed, as global warming has melted the ice and made it more difficult to travel the regions, leading to a scarcity of prey, as reindeer have all but disappeared, and much of the youth have been drawn to work in the factories and towns, leaving behind their native way of life that has lasted for centuries, including their daughter Ága (Galina Tikhonova), who works in the diamond mines of the nearest town that may as well be lightyears away.  Because of their relationship with the surrounding world, the immensity of the landscape becomes the main feature of the film, shot by cinematographer Kaloyan Bozhilov, where people are secondary, feeling utterly timeless, as there are few signs of the modern age intruding and threatening their traditional existence, though one of the more intriguing shots is of a jet flying through the skies leaving its gaseous contrail behind, a reminder of the damage man is inflicting on the planet.  In a stunning contrast, Nanook has a radio where late at night he can sit and listen to Russian airwaves, where a prominent theme heard throughout, much like Visconti in DEATH IN VENICE (1971), also Leonard Bernstein at the funeral of Robert F. Kennedy, is the Adagietto from Mahler’s 5th Symphony, Gustav Mahler - Adagietto from 5th Symphony | Vienna ... - YouTube (12:07), which totally expands what’s viewed onscreen, with its tragic and foreboding overtones, adding a sense of the unworldly and the sublime, but also an impending sense of death.

While the film feels overly simplistic and uneven in spots, dramatically inert at times and riveting in others, just the idea of a Bulgarian director tackling this subject matter is interesting, mixing reality and myth into a single narrative, where the dialogue feels functional at best, though there are heightened moments which astound.  Like something from out of this world, they actually receive a visitor, Chena (Sergey Egorov), a somewhat melancholy guy who arrives by snowmobile, offering firewood and kerosene, and news of their daughter, which irks Nanook, who hasn’t spoken to her in years, having done something he apparently found unforgivable, asserting, “Legs are like family, one can’t do without the other.” Sedna believes the rift should be healed, urging forgiveness from her husband even as she’s making her daughter a fox fur hat.  But the visitor leaves as quickly as he arrived, retreating into the whiteness of the horizon.  But the winds pick up, threatening to blow away their temporary home, as a major storm develops, where both are physically tested like never before and pushed to the limits.  The tone of the film shifts when we realize Sedna has a deep wound in her belly that she’s been treating with medicinal herbs, a revelation that is a shock to viewers.  They look at an old back and white photograph of the three of them together, Ága in long braids, smiling, which is a happy reminder of earlier times before Sedna takes a turn for the worse, recounting a dream in vivid language filed with symbolism, where perhaps only Nanook understands the depths of its underlying meaning, but it’s her final monologue before succumbing to her wound.  The end sequence is surprisingly good, with Nanook leaving everything behind except the family photograph, seemingly walking for days on end, getting a ride from an eccentric truck driver on the frozen road to the mines, where the look of the town, with this gigantic hole in the earth, as if struck by a meteor, is like no place else on earth (Mirny mine, closed since 2004, more than half a mile wide and 1000 feet deep, where it’s a no-fly zone, as the sheer depth of the mine can suck helicopters into it), an example of the dehumanized hand of man leaving such an unnatural yet devastating imprint, where it’s hard to fathom just how humans dug a hole that deeply into the earth (Was it built by Gulag labor as well?).  Visually, it’s a stunning image that plays in the head of viewers long afterwards, as we’ve simply never seen anything like that before, but that’s only the backdrop for a phenomenally affecting finale, beautifully written, wordless and concise, where there is no way to misunderstand the impact of this moment, as it’s simply shattering.
Posted by Robert Kennedy at 12:01 AM