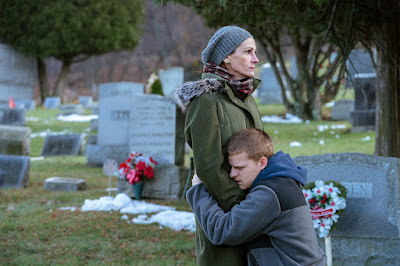 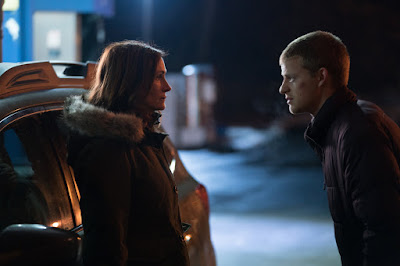 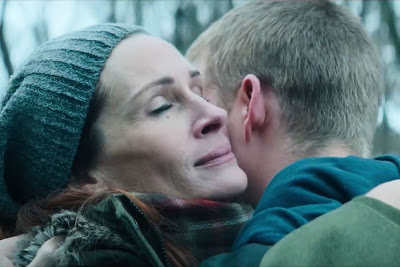 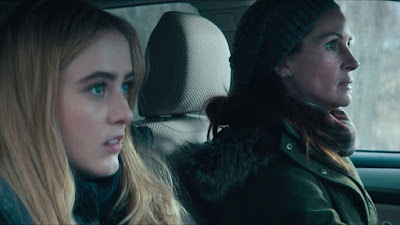 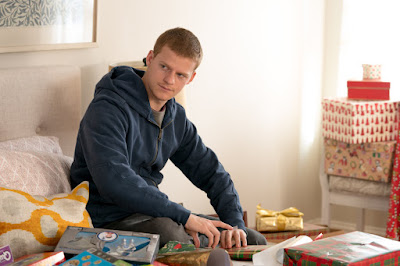 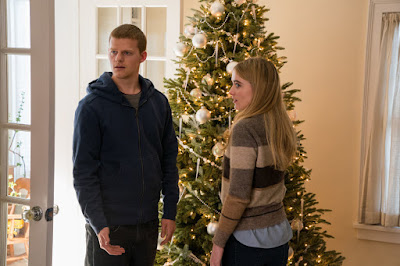 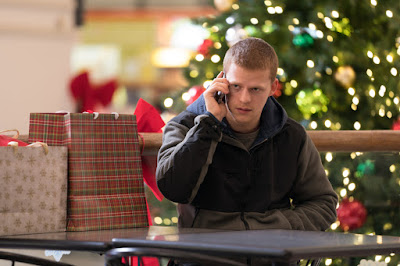 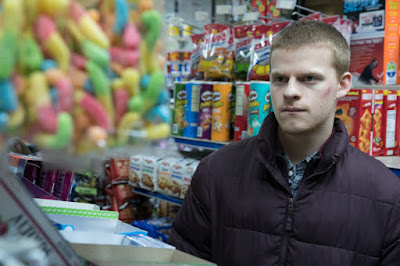 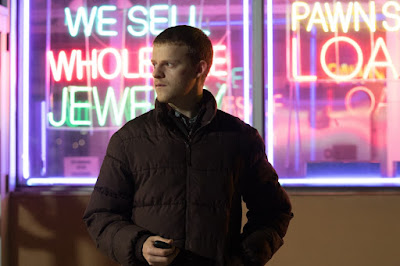 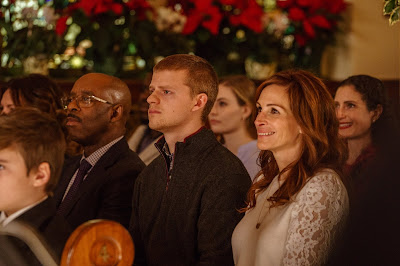 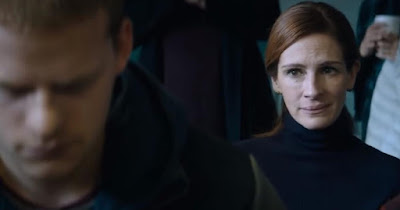 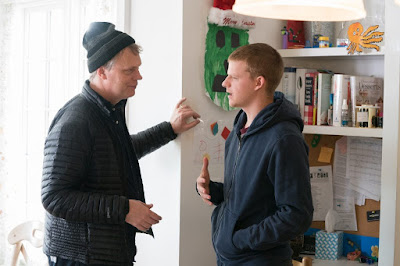 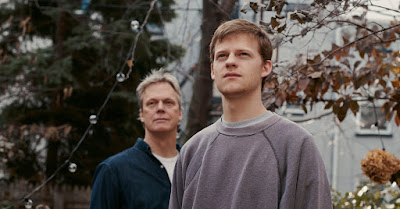 About as downbeat a subject as possible, especially set during the Christmas holidays, yet as upbeat and quirky as PIECES OF APRIL (2003) is as a Thanksgiving movie, this couldn’t delve into more miserablist territory for Christmas.  An interesting subject for a father and son movie, as the writer/director Peter Hedges features his own son Lucas Hedges as the ghost of Christmas past, whose violently painful experiences as a lying and cheating junkie infest an otherwise likeable family with dour memories of yesteryear.  Tinged with gloomy elements of stark realism about addiction that simply overwhelm your typical Hollywood family melodrama starring celebrity darling Julia Roberts as the spirited (and foul-mouthed) mother determined to see it through with her troubled son on the verge of relapse and contaminating yet another Christmas for this family.  While the director is also the author of the masterfully distinctive first novel What’s Eating Gilbert Grape in 1991, turned into an outstanding movie two years later, this is a more darkly mainstream effort, likely to surprise many viewers who are expecting a more cheerful Julia Roberts holiday experience, yet it does touch upon an extremely relevant issue, particularly in rural America, where the opioid crisis is real and dangerously out of control.  This town has a uniquely familiar look to it, lightly layered in snow that could be anywhere in America, with a church representing the social center, a gathering place for the town’s familiar faces, a place to set aside their differences and pray for a better world, with children dressed up in home-made costumes as angels, shepherds and even sheep, playing out the nativity scene, accompanied by a choir singing familiar hymns.  This exact same scenario plays out across the country during the Christmas season, with parents proudly displaying eager approval for their children, where there’s a beautiful innocence to it all, unstained by rancor and cynicism.  Like the presence of Robert Mitchum in The Night of the Hunter (1955) or CAPE FEAR (1962), danger lurks just outside in the shadows threatening the safety net of middle class security and white privilege.

With the return of 19-year old addict Ben Burns (Lucas Hedges) to his family, supposedly doing so well in his 77-day rehab effort to stay sober that he is rewarded with an early Christmas Eve release, this is divided into two distinctly different films, the first half when we suspect he’s lying, and the second half when we know he’s lying, as the shift of tone from optimism to pessimism couldn’t be more radically different, throwing a screwball at the audience, wondering just how down to earth can they get?  Opening as an otherwise happy suburban family preparing to enjoy the holidays together, we meet a mixed race household, with Holly (Julia Roberts) married to a black husband, Neal (Courtney B. Vance), with two children from a previous marriage, Ben and his younger sister Ivy (Kathryn Newton), and two adorable biracial children, Liam and Lacey.  With Ben waiting outside their home, Holly in particular is overjoyed to see her son, while Ivy is openly suspicious, and Neal even more so, as they’ve been burned on Christmas twice before, and now he’s apparently violating his agreement to completely get well before returning home.  Alarms are immediately triggered, as Holly hides the medicine and jewelry, anything that could be perceived as a temptation, while Ben tells a story of progress and encouragement, claiming his sponsor recommended this visit and he’s so glad to be back, hugging the dog and the young children, who are oblivious to his earlier transgressions.  At the first hint that things might not be going as well as it seems, Holly lays down the law, demanding a clean urine test and an ability to stay completely within her sight for 24-hours, which he readily agrees to, though what follows is his ability to skirt the line, seemingly at ease, confounding his mother every step of the way, who’s already angry at the others for giving up on him so easily.  A harrowing visit to a Christmas Eve church service leaves Ben stung by the “goodness” of it all, personally overwhelmed at his inability to meet the moral standard, while of greater significance is Holly’s personal acknowledgment to a neighbor sitting nearby, Mrs. Conyers (Rachel Bay Jones), who lost her daughter to addiction, with Ben blaming himself, as he was her dealer and got her interested in drugs in the first place.  Why did he live and not her, feeling he was the one that deserved to die.  With these kinds of issues running around in his head, Holly urges him to be grateful that he’s alive, as every minute and every second is a precious gift.

The moment they return home, however, the house has been broken into, with someone taking the family dog.  All eyes point to Ben, as he has been the culprit before, and is now at the center of what just happened as well, slipping out the door in a panic, separating himself from his family.  With that, her family once again threatened, destabilized, and in a state of panic, Holly goes on a mission to find him.  While initially it’s not hard, as he’s only gone a short ways down the road, but he’s blaming himself, telling his mother he’s been lying all along, that his sponsor never recommended this visit, and that she should never believe an addict, as lying is what they do.  With a newly discovered need to be totally honest and truthful with himself, he has to get to a Narcotics Anonymous meeting, with his mother following along, admitting to things she never knew, having the learn hard truths about her son’s troubled and conflicted life, still in search of the dog, not sure who from his past life would do such a thing, taking a tour of his former sins, where perfectly respectable homes are met with comments like “I used there, I stole there.”  What they experience is an upheaval of shame, revisiting the scenes of a crime, where he’s the drug dealer and master thief, putting himself back into precarious positions, where each sordid revelation is a doorway to hell that he now has to climb back into in search of who hates him most.  This takes him to dangerous locations, not the kind you bring your mom to see, so he ditches her at an all-night convenient store, taking the vehicle where he is finally out on his own.  This nasty turn of events also reveals how Holly has been protecting him, not telling the truth to her own family, enabling him, jeopardizing their lives, hoping that somehow this time it would be different.  This dark leap into the unknown turns this into thriller territory, not knowing what to expect, but danger lurks everywhere, as over the course of the night Ben revisits the ghosts of his past, some who are homeless, still addicted, imprisoned, or dead.  It’s been years since Roberts was gifted with a role like this, searingly emotional, going to unheard of places, which includes a visit back to the home of Mrs. Conyers, as only people placed in their desperate position are prepared to know what to do in the worst circumstances.  This film doesn’t sugar coat it, as conventional society has no answer, and no commitment to find answers.  While this is an upper middle class family where Neal is quick to point out that if Ben was black he’d be in jail by now, but the family’s wealth has afforded him multiple rehab opportunities, so they’ve been through this wretched journey before, nonetheless the tone is bleak and punishing, taking us into a no man’s land that leads straight to hell where not everyone makes it back.
Posted by Robert Kennedy at 12:01 AM