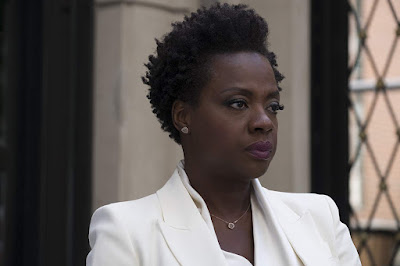 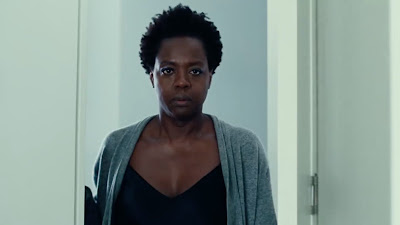 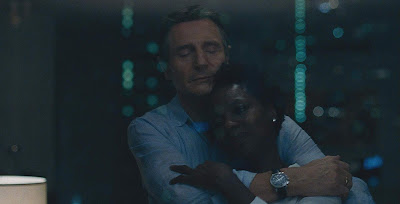 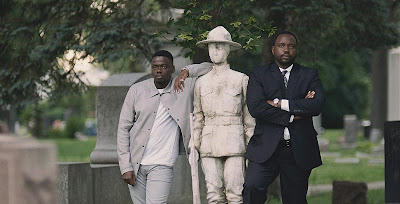 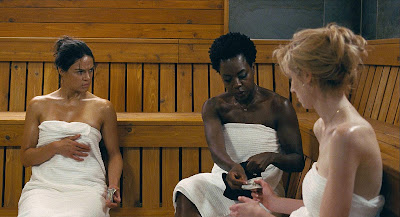 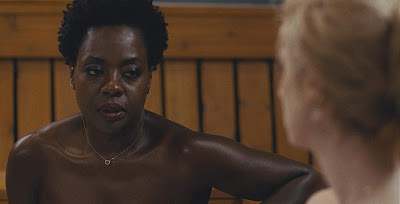 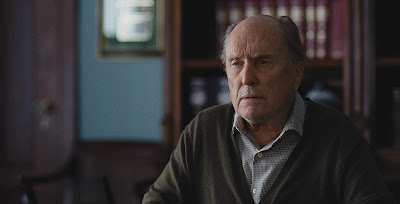 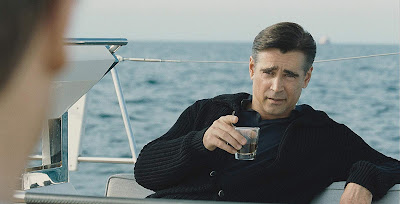 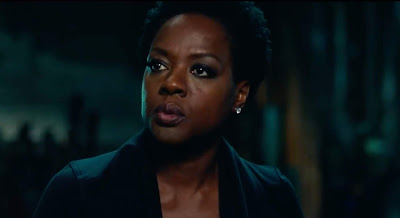 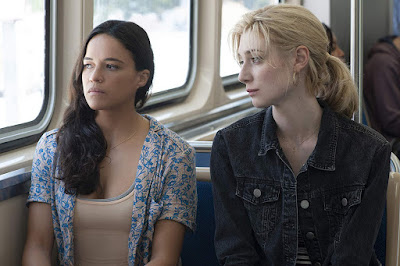 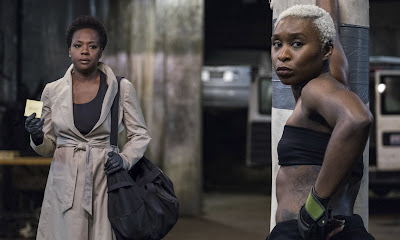 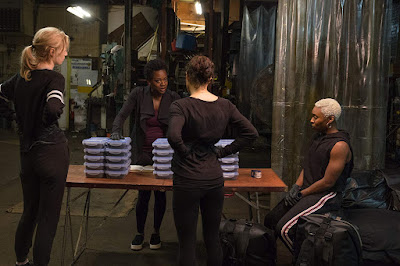 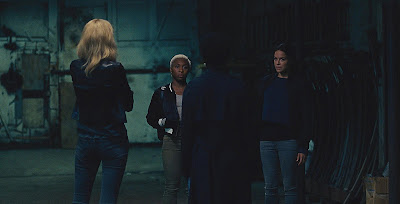 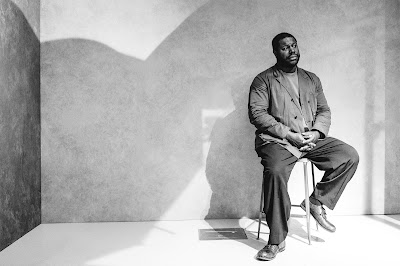 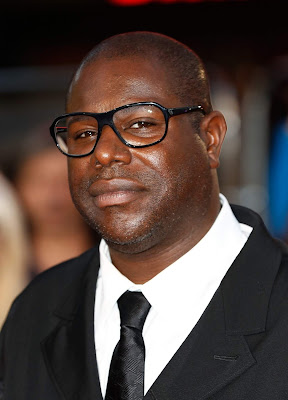 Our lives are in danger; our husbands aren’t coming back; we’re on our own.
―Veronica Rawlings (Viola Davis)

This has the steely feel of a Soderbergh film, especially with the percussive musical score by Hans Zimmer, and a luminous look glistening with an accent on artificial surfaces by cinematographer Sean Bobbitt, featuring exquisite locations throughout, including a floor-to-ceiling windowed penthouse suite to die for, resembling a similar upscale hotel room used in McQueen’s Shame (2011), making this one of the better looking films shot in Chicago, where the sleazy criminal vibe of rampant corruption feels like the perfect backdrop.  The script, however, written by the director and Gone Girl’s novelist Gillian Flynn adapting Lynda La Plante’s six-part robbery mini-series (by the same name) made for British television in 1983, just doesn’t live up to the potential of having such a superb cast, assembling one of the best ensemble casts of the year to work with, turning this into something of a politically correct revenge saga, empowering women to do what men typically do in a heist film, with audiences cheering morally bankrupt actions, making this a better looking film than it actually is.  Filled with plenty of plot contrivances, little about this film is actually believable, straining credibility throughout, yet however implausible it may be, its meant to be massively entertaining, filled with supercharged thrills, feeling more like a guilty pleasure.  Taking a lead from Spike Lee’s INSIDE MAN (2006) or Soderbergh’s Ocean’s Eleven series (2001, 2004, 2007), with a women’s version entitled OCEAN’S 8 released earlier in 2018, the key is establishing character first, with viewers becoming familiar with the subjects seen onscreen, in particular four women from different economic and social backgrounds who lose their husbands in the opening moments of the film, blown up in a failed robbery attempt that shows Chicago’s finest actually cornering the bad guys, something they’re completely inept at doing in real-life, with audiences identifying with the manner in which these women are strong-armed into taking extreme measures, having to stand up for themselves after being placed in a precarious position by their criminal-minded husbands who stole $2 million dollars from a loathsome underworld character who is actually running for Alderman, hiding his shady past with a face of respectability.  But this man demands his money back, threatening the wives of the men who stole his money, along with their families, all of whom face dire consequences if the debt is not repaid in 30 days.  Consequences ensue.

At the center of the picture is Veronica (Viola Davis), a teacher’s union delegate living in a posh penthouse apartment with a view she could never afford, where it’s clear from the outset she’s already living high above her means, but she’s also married to Harry (Liam Neeson), a criminal mastermind behind the operations gone wrong that sets the gears in motion.  This racially mixed marriage produces an awkwardly uncomfortable moment of intimacy, set to the lush music of Nina Simone, Nina Simone - Wild Is The Wind (Original Version) - YouTube (6:46), as the blatantly raw and crude manner in which their mouths and tongues intertwine is just gross, nothing romantic about it, where you realize right away that something is off, despite all the claims of grief expressed at the funeral, where among those paying their respects is Jack Mulligan (Colin Farrell), running for his father’s seat in the City Council, Alderman Tom Mulligan (Robert Duvall).  Their family have been Chicago powerbrokers for generations, where by now they believe they own this position by Divine right.  Ironically the man Mulligan is running against, black gangster and community businessman Jamal Manning (Brian Tyree Henry), is the man Harry was robbing, delivering his heavy-handed message to Veronica personally, making sure she understands exactly who she’s dealing with.  Perhaps even more preposterous is the chauffeur-driven black limousine that escorts Veronica wherever she needs to go, with her own private chauffeur, Bash (Garret Dillahunt), who delivers a message that her husband wished she would receive in the event something happened to him, which is the key to a safety deposit box that contains Harry’s notebook, which contains the meticulously detailed plan for a heist worth $5 million dollars.  Like a message from the dead designed to answer her prayers, she summons the other widows who lost husbands, one with a newborn declines the invitation, Amanda (Carrie Coon), for reasons that are explained later, while two show up, Alice (Elizabeth Debicki) and Linda (Michelle Rodriguez), all duped and deceived by their husbands and now in desperate straits, agreeing to go ahead with Harry’s planned heist, each assigned various aspects of the plan, with Veronica coldly assigning the tasks like a gangster’s moll, refusing to show an ounce of emotion, remaining dead serious, as if their lives depend upon it.  While Davis is a force throughout, haunted by flashbacks of her missing husband (who’s also seen in a beautiful reflection in the window as she peers out), her incessant grief throughout defines the depths she must pull herself out of, becoming the ringleader for this band of sisters.  While the other women find her a bit bossy, they realize she has the notebook so they do what’s asked, even when it seems impossible.

Delving into side stories, we discover Jack Mulligan is at odds with his father’s old-century way of doing business, getting into a shouting match of profanities, wanting to break free from the nepotism and racial divisions, where he’s only half-heartedly interested in becoming an Alderman, wanting to pursue other interests.  When we see him on a campaign stop in the vacant lot of a rundown black neighborhood, he parades a host of black women as model entrepreneurs, each claiming he helped them become self-sufficient and successful businesswomen, examples of exactly what the neighborhood needs, providing well-needed income into the poorer regions of the city.  But there’s also a reporter hounding him about a corruption investigation hovering over his head that he refuses to discuss, hopping into his chauffeur-driven limousine where he becomes unglued, decrying how unfair it is being a white politician for a black district, as his district has recently been redrawn, making it less of a sure thing this time around.  The neighborhood changes from black to white as he speaks, becoming upscale when he gets out of the limo, living in a palatial estate protected by iron gates and security cameras.  Meanwhile Jamal Manning has his own private hitman in the form of his brother Jatemme, Daniel Kaluuya from Get Out (2017), who is more cartoonish than real, as Chicago politicians have reputations for embezzlement and fraud, basically stealing money, but not murder.  Meanwhile they get to Bash, whose murder leaves the widows without a driver, so Linda, enraged from losing her clothing store, as her husband gambled it away, enlists her babysitter, Belle (Cynthia Erivo), one of the few people she trusts, a fitness nut who also works as a hairdresser, where we quickly learn who her business partner had to pay to go into business for herself, Jack Mulligan, who is basically extorting money from up and coming black entrepreneurs.  But it’s Debicki as Alice who is the real surprise, a trophy wife abused by her husband, then urged by her overbearing mother (Jacki Weaver) to get into the highly profitable escort business, meeting David (Lukas Haas), a wealthy man in high stakes real estate who seems to appreciate being with her, but only on his own terms, paying up front with every visit, never opening up or becoming vulnerable, remaining a control freak, which causes her some concerns.  So we realize what’s at stake when the women go all-in on the plan, as it’s the price of their own freedom, essentially the ability to set the ground rules of their own lives.  McQueen delivers a well-deigned heist, though it’s much more sophisticated than viewers are led to believe, encountering surprises along the way, but they strike back relentlessly, defending their turf while protecting the money, showing a sense of uncompromising resolve when it matters, becoming a badass team, earning cheers from the audience, becoming a crowd pleaser.  While the cast is a delight, and the film well-crafted, along the way it attempts to throw in matters of inclusivity, class, corruption, feminism and race that get easily overlooked in this breezy entertainment venture that is mostly about visceral thrills, with the sultry sounds of Sade playing over the end credits, Sade - The Big Unknown (Lyric Video) - YouTube (3:46).
Posted by Robert Kennedy at 12:06 AM