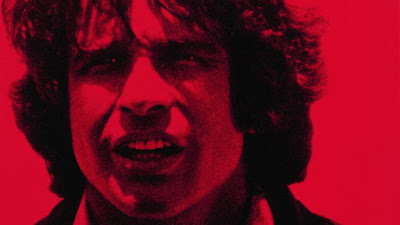 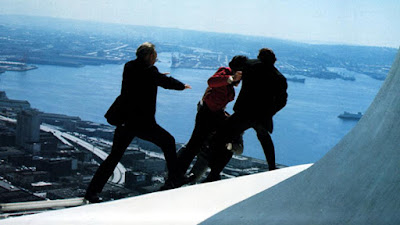 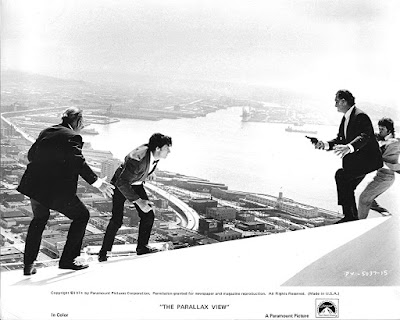 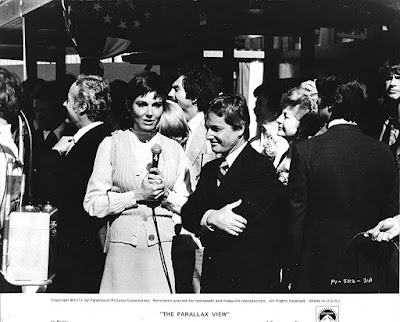 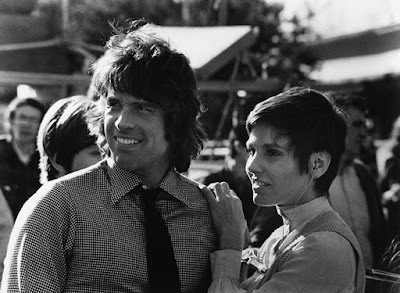 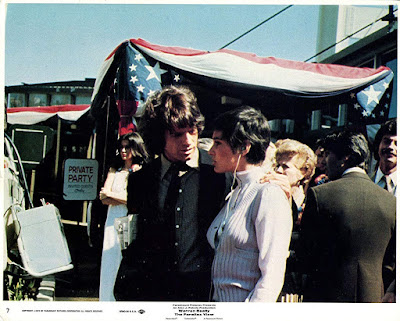 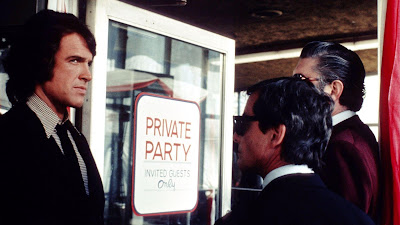 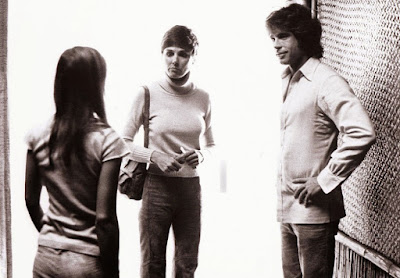 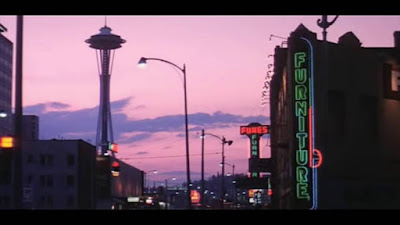 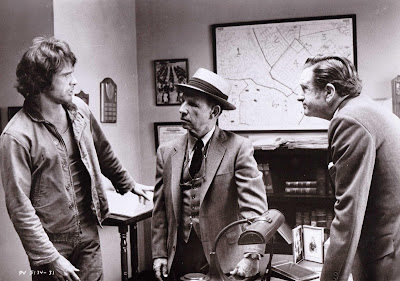 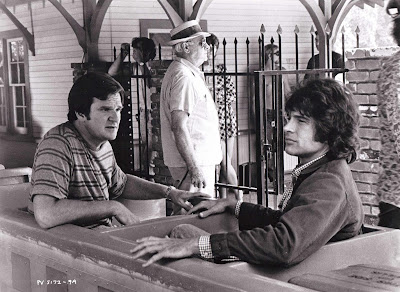 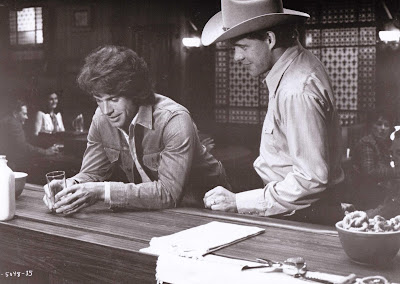 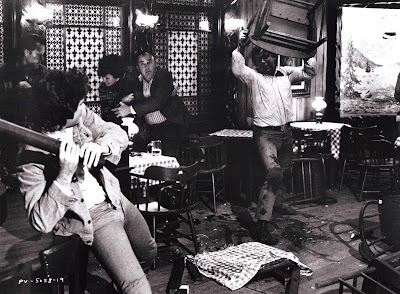 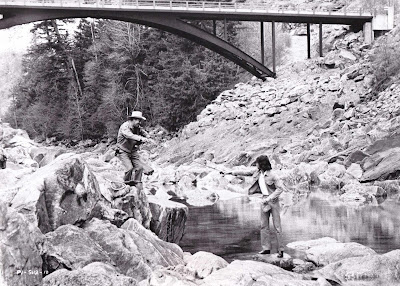 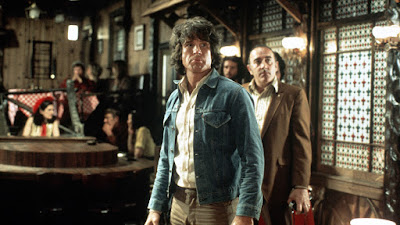 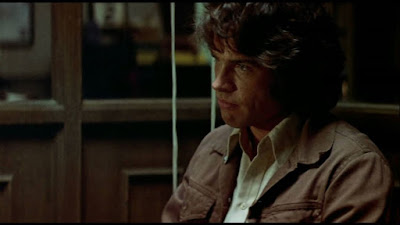 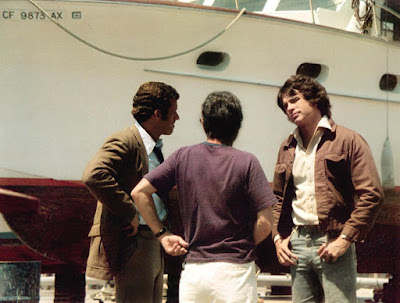 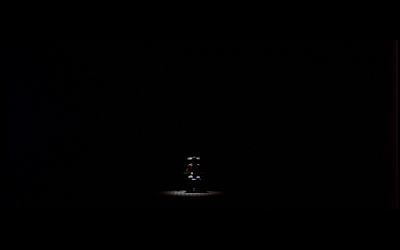 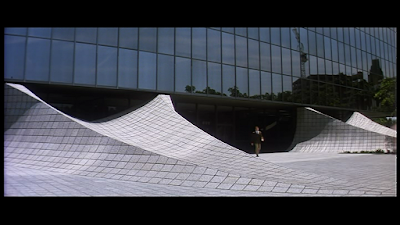 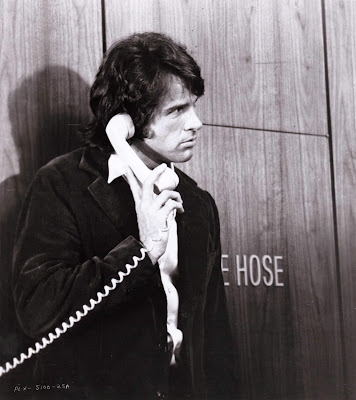 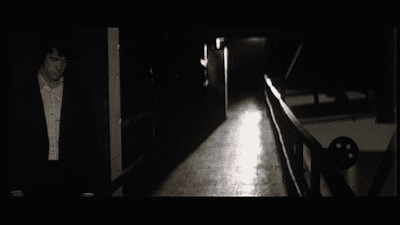 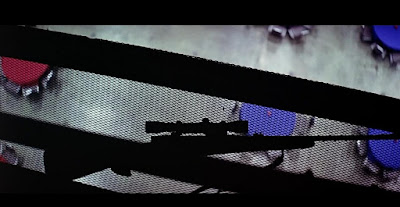 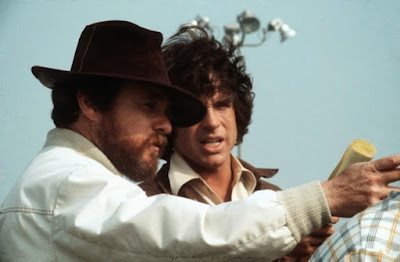 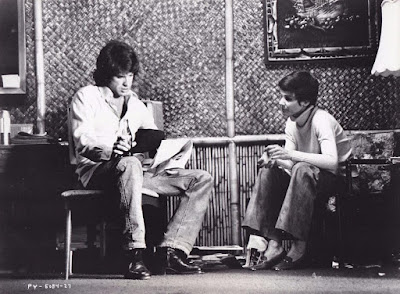 Warren Beatty on the set with Paula Prentiss

If the picture works, the audience will trust the person sitting next to them a little less at the end of the film.
―Director Alan J. Pakula

Every time you turned around, some nut was knockin’ off one of the best men in the country.
―Joe Frady (Warren Beatty)

After Frady is shown a photograph of the other waiter (a presumed suspect) by Austin Tucker (William Daniels), Carroll’s former aide, yet another unfortunate boating accident occurs, killing Tucker and his associate, with reason to believe Frady didn’t survive, so when he shows up, Rintels is more receptive this time around, offering money for support, urging Frady to check in with him regularly.  Much to his surprise, a Parallax official arrives at his door, Jack Younger (Walter McGinn), always polite, eagerly informing him “We could use someone like you,” thinking they just might have something for him, telling him to come in for a personalized test, which turns out to be the scene of the film, like something out of Kubrick’s A Clockwork Orange (1971), but it’s not a brainwashing technique, instead it’s more like a lie detector test, a psychological gauge meant to measure positive signs of hatred and inner rage, measuring his inner psyche for violent sociopathic tendencies, really unlike any other test.  While seated in a darkened room in a specially designed chair (like an electric chair) equipped with sensors, filmed as a mammoth room designed to diminish any signs of individuality, where he is merely a speck of light, he is instructed to simply observe the “visual materials.”  In many ways this set-up recalls a similar scenario of Beatty being portrayed in Arthur Penn’s exasperatingly existential Mickey One (1965), another paranoid thriller where a small-time comic performs before no visible audience, just an Oz-like voice behind the lone spotlight pointed directly at him in an otherwise completely darkened theater, a nightclub audition from Hell that resembles being locked inside of your own conscious with no way out.  While those are just reference points to help digest the uniqueness of the experience, where the highly abstract six-minute montage is an uncanny document in itself that seems to specialize in subliminal imagery, starting slow and then speeding up, The Parallax View (The Test Scene) - YouTube (6:21), perhaps the best description comes from a Damon Smith review from Reverse Shot, Southland Tales / The Parallax View - Reverse Shot:

A montage sequence begins, intercutting the words “LOVE,” “MOM,” “GOD,” “HAPPINESS,” “FREEDOM,” and “ME” with bland homespun images of a father and son, an elderly couple, babies, baseball players, pies, churches, and rural farmhouses, accompanied by a soothing ‘70s soft-rock theme. The word “COUNTRY” is paired with glimpses of Mount Rushmore and the Statue of Liberty, the word “ENEMY” with stills of Castro, Mao, and Hitler. As the music shifts to a more dissonant register, the images arrive faster and have an uglier, more harrowing aspect (lynchings, prison cells, muddy-faced children, riot scenes, bodies), leading to disturbing juxtapositions and presumably confused emotional reactions on the part of the viewer, who is invited to identify with comic-book avenger Thor. Since we see it all through Frady’s eyes — there are no cutaways or reaction shots during the entire six-minute sequence — the experience has the flavor of a bad acid trip, speaking to the ways American ideologies can be twisted into revenge fantasy by pathology. Or more to the point of the scene within Pakula’s film, deployed as such by mind-control experts.
It’s an intriguing sequence, paralleled by Fuller’s SHOCK CORRIDOR (1963) where doctors, the sole authority for institutionalized mental patients, are performing electro-shock treatment on patients, allegedly to cure them of their psychotic tendencies, while here a secret corporate entity is attempting to measure recognizable signs of sociopathic disturbance, but rather than cure the patient, this corporation wishes to utilize the anti-social resentments in furthering their cause, which is carrying out assassinations while cleverly concealing the real culprit behind the crimes.  In the 60’s, society was met with anti-establishment demonstrations against the war, ending discrimination in all forms, allowing free access to the ballot, equal treatment of women, and cries against an entrenched systematic authority run amok, with hopes of creating a better and more hopeful world, yet Fuller’s vision depicts an anxious world driven to madness by the extreme pace of social progress and change, where mental patients exhibiting signs of stress from war, racial bigotry, and fear of nuclear annihilation are all treated as damaged psychotics in need of extreme forms of psychological therapy, such as electro-shock treatment in an attempt to rewire the patients on a more benign course of behavior that exhibits less activism.  In the 70’s, however, the individual has all but been eliminated, as it’s a world now controlled by unseen corporate strategies who have their own plan for how the world should look, using criminal acts of murder and sabotage to achieve their dubious aims, all kept out of sight from the public, who has no inkling of what’s really going on, yet a helpless sense of dread exists everywhere, as there’s reason to believe in governmental conspiracy theories and cover-ups, all designed to keep the public from learning the truth.  Corporate America is there to answer the call, rewiring the circuitry behind the scenes.

Amazingly, while at the Parallax offices, Frady doesn’t wait for the test results (ironically he already fits the profile), but instead recognizes the second waiter and presumed assassin (Bill McKinney) from Senator Carroll’s assassination and follows him, observing that he picks up a suitcase from the trunk of a parked car then heads for the airport, checking that bag at curbside check-in.  Searching in vain for the man, Frady actually boards the plane on the runway ramp as if it were a waiting train but can’t find the missing man, instead he discovers the presence of another U.S. Senator flying in first class.  Paying on board directly to the stewardess, with open smoking freely allowed as well, both options were eliminated a long time ago, which certainly dates this picture.  The missing man is actually detected on the airport roof watching the plane’s takeoff, while Frady, once onboard, coolly has to decide what to do in a ten-minute wordless sequence that plays out slowly over time The PARALLAX VIEW 8(is that P-A-I-L-E-Y?) YouTube (9:52), accumulating tension, writing a note that a bomb is on the plane and placing it in the pile of napkins on the stewardess tray.  When she finds it, she takes it to the pilot who turns the plane around, claiming mechanical issues.  Once landed and the passengers departed, the plane explodes, yet casually waiting for him in his apartment is Jack Younger, who confronts him about his fake identity, having to invent yet another fake story to explain his actions, yet he is given a new assignment with a partner, who he cleverly sends to a deep retreat in the remote regions of Hawaii.  Curiously, Bill Rintels is seen listening to cassette recordings made of the conversation with Younger, placing it in an envelope with other recordings, receiving a food delivery at his desk, as is his habit, though this delivery man is the second waiter who poisons his food, removing all tapes and any other evidence connecting Rintels to the Parallax Corporation.  What’s evident is that Frady, like the journalist in Fuller’s film, has gotten himself deeply embedded into a nefarious situation with little wiggle room to escape, where he’s an amateur dealing with professionals, taking the precarious position of a lone wolf, a man on his own fighting against the darker sides of evil.  What he gets himself into in the final sequence is a trap, beautifully set up at another patriotic venue (where the villains hide behind the patriotic music), the afternoon dress rehearsal at a large convention center for the political rally for Senator George Hammond (Jim Davis), with Parallax agents stationed high above in the rafters, as if providing security, where Frady, following them, finds himself alone up there with no way out, ensnared in their deceitful web, unable to prevent yet another political assassination that takes place right before his eyes, yet he’s paralyzed, helpless to do anything about it.  Much of the beauty of the film is in what is left out, remaining puzzling throughout, told in an intentionally oblique manner, where part of the fascination with the film (and perhaps the Warren Commission as well) is the realization that we’ll never know the real truth, that government and corporate prowess may have ingeniously mastered the art of cover-ups and deception behind the scenes, leaving us in a state of permanent frustration with lingering unanswered questions.  The existence of the Parallax Corporation is largely an imaginary power that exists behind the public face of government, one that operates in total secrecy, but may be the real power lurking behind elected power, like a secret government, as has been suggested in various theories behind the Kennedy assassination, that Lee Harvey Oswald did not act alone, yet he was the fall guy for the real unnamed powers behind the assassination of a sitting U.S. President.  Much of this was also suggested in Sydney Pollack’s THREE DAYS OF THE CONDOR (1975) as well, especially in the precision of a hired CIA assassin (Max von Sydow) who works both sides of the East/West divide, but is paid handsomely for his unmatched expertise.  Frady can’t complete at that level, turning this into a more cynical, downbeat finale, suggesting a bleaker worldview, yet he symbolizes the lone voice of journalism fighting against the darker impulses of authoritarianism.
Posted by Robert Kennedy at 12:02 AM