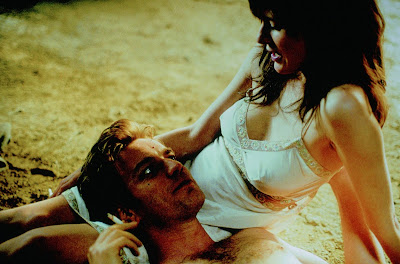 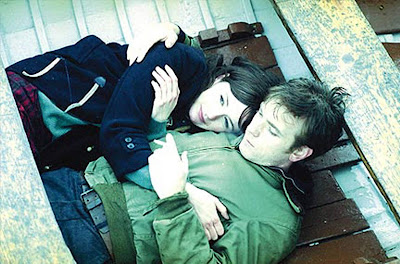 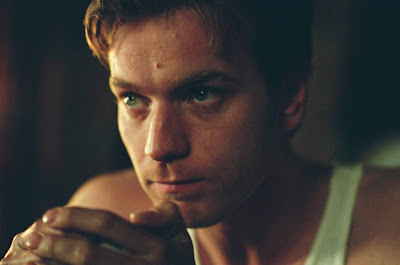 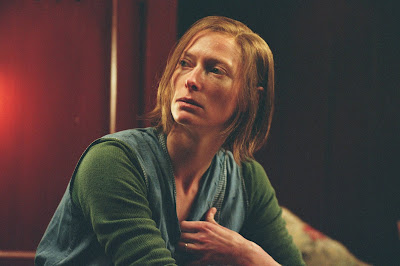 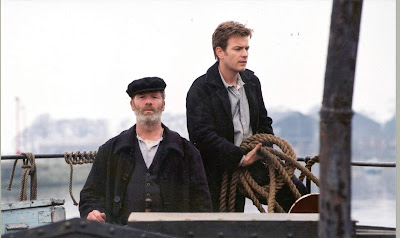 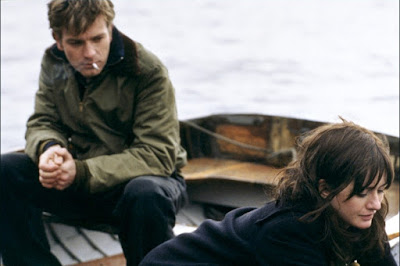 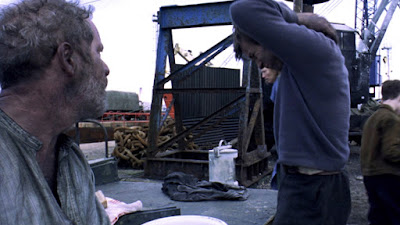 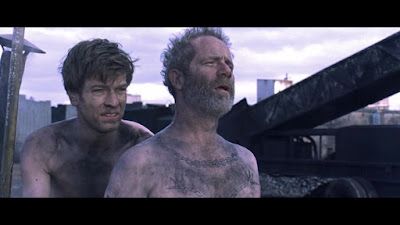 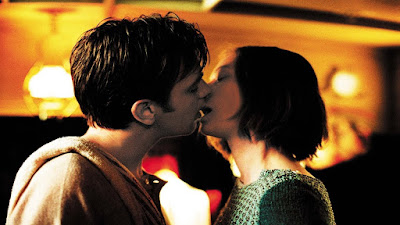 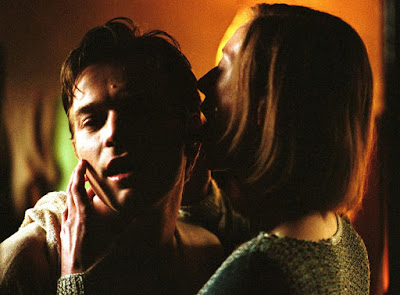 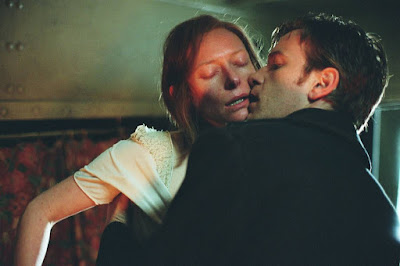 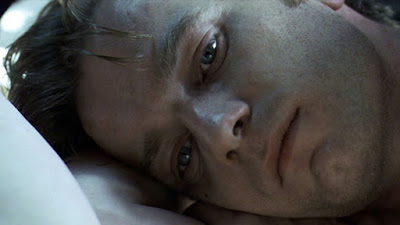 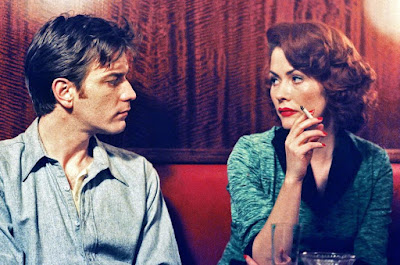 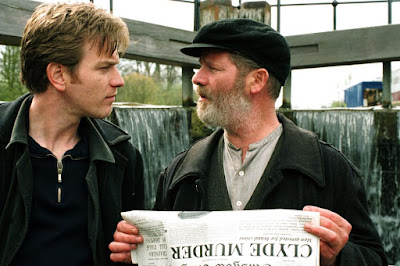 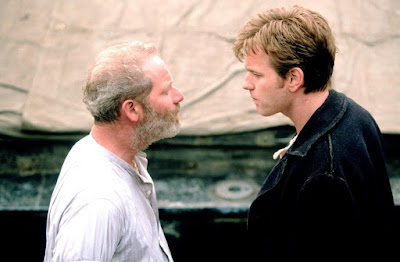 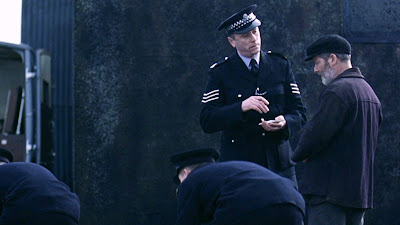 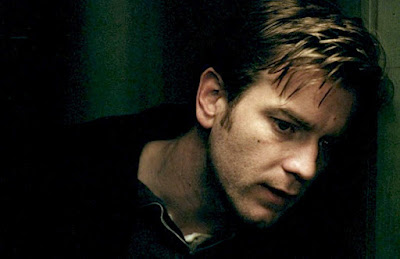 If ever anyone says to you, “You can put that where the sun don’t shine,” think of this film, a deeply probing, excessively gloomy adaptation of Scottish beat author Alexander Trocchi’s novel.  Ambiguously set in postwar Scotland, this is a tense, sexually explicit lower class version of Polanski’s KNIFE IN THE WATER (1962) with a brilliant cast, the ménage à trois, Les and Ella, played by Peter Mullan and Tilda Swinton, an unhappy couple with a young son onboard who transport post-WWII fuel rations on a barge up and down the narrow canals from Glasgow to Edinburgh, who take on hired help in the form of Ewan McGregor who plays Joe, a chain-smoking, handsome lothario, a self-absorbed character largely based on the author himself, who was a heroin addict with squandered talent.  Filled with an attention to detail, few words, and an endlessly gray mood, the film opens on the docks as they sweep a woman out of the harbor dressed only in a flimsy petticoat.  Shortly afterwards, Joe is staring at Tilda Swinton’s every move, sharing close quarters underneath the decks of the barge, concealing little from her husband.  In this film, no words are needed, and after a brief sexual escapade outdoors on the grassy slopes, when Joe tries to say something, Ella cuts him off quickly, “You’ve said enough for one evening.”  In a series of well-placed flashbacks, Joe is seen meeting and romancing the drowned woman found in the water, Cathie (Emily Mortimer), picking her up on the beach, moving away onto the concealment of rocks where they have sex, learning more about their deteriorating relationship but only as the film progresses, where it seems to be moving in slow motion backwards and forwards, all at the same time.  The style is absorbing, moody, incredibly detached, but extraordinarily focused on each single moment at hand, which when gone, seems to have never meant very much to anyone at all, as if all is lost in a deep abyss of an existential void.  Easily comparable to the most famous barge movie of all time, Jean Vigo’s L'Atalante (1934), which also happens to be the name of the barge (The Atlantic Eve), this lacks the surging romanticism and optimistic feel and instead embarks upon a more somber and fatalistic mood that is diametrically opposed to Vigo, a downbeat depiction of working class social realism that accentuates physical intimacy, where Joe screws every woman he meets, with the audience sympathies and overall view of his character slowly deteriorating over time.  The story moves to the murder trial of the drowned girl, becoming a morality tale, as the police seem to be accusing the wrong man, which sparks the interest of Joe, who slowly, but surely, falls farther and farther from grace.  With an intriguing soundtrack by Talking Head’s David Byrne, the title, one assumes, refers to original sin.  To quote Michael Wilmington, “This is an unvarnished, pitiless look at real life by a man who knows his character is deeply flawed and does nothing to disguise or excuse it.”

Interesting parallels exist between Vigo, whose life was cut short by tuberculosis, actually directing part of L'Atalante from a stretcher, and the author Alexander Trocchi who wrote his novel from the drugged stupor of a lifelong heroin addiction.  Instead of believing in love, the underlying power of Vigo’s film, this is all about sex, viewed as a short-term substitute where there is no possibility of love.  One main difference in the film is the lack of an inner narration, which is provided by Joe in the book, instead the film wordlessly sees the world through his eyes.  A gritty depiction of working class life, this parallels the poetic realism of Vigo’s film, both offering sumptuously beautiful cinematography (in this case Giles Nuttgen), but this film couldn’t feel more claustrophobic, as the cramped quarters inside the boat are squeezed right next to each other, with paper thin walls offering no privacy to speak of, with Joe using reading a book as an excuse not to go into town with Les, or cuts his visits to the pub short, as his real purpose is to have moments alone with Ella, growing used to each other after a while, even bored, as is suggested when he watches a fly sitting atop her naked breast, which holds little interest anymore.  Simultaneously, Joe is seen staying at home attempting to write on a typewriter while Cathie works all day, but he fails miserably, a writer with no inspiration, usually in a sour mood when she gets home, or drunk, treating her terribly, at times like a sexual predator.  This picture of domesticated bliss is always soiled and stained, a picture of opportunities wasted, yet she yearns for the stability while that most of all is what feels like its breathing down his neck, suffocating him, offering him no relief, eventually making a quick exit.  This failed relationship is what leads him to Les, seeing him throw his typewriter away into the river, offering him a job on the barge, where Joe is viewed as just another drifter.  There’s another scene in the film that’s not in the book, a moment when Ella’s young son falls into the canal, with Joe jumping in headfirst to save him, perhaps offering a bit of sympathy to this otherwise wayward character, suggesting he’s capable of moral decisions even as he openly flaunts behavior that suggests otherwise, having regular sex with Ella right under the nose of Les, thinking only of himself, taking advantage of every opportunity, showing no regard for others.  Pretending to express little interest in the ongoing investigation surrounding the drowned girl, the seemingly unflappable Joe is fooling no one, least of all the audience, while Les just wants to see his name in the papers.  Their closeness is revealed, however, in a scene scrubbing each other’s backs, wiping the coal dust off their bodies, which is done without an ounce of pretense, where it’s simply viewed as a necessity.  Along with trips together into town to visit pubs, this friendly male bonding on the one hand and willful sexual promiscuity with his wife on the other reveal the moral divide that actually defines this picture.

Moody and extremely atmospheric throughout, while there is an idealized freedom that comes with the barge, with no set hours, no punching the clock, living on the river away from the noise and traffic of the city, the film does an excellent job revealing a near-documentary view of ordinary life traversing the narrow bridges and locks along the river, loading and hauling a variety of commodities.  None of the other characters have much character development, though Swinton makes Ella proud and self-aware while Cathie completely surrenders her dignity and self-respect, instead focusing upon Joe’s sexual exploits, showing little affection and even less responsibility.  Through a series of flashbacks Joe’s despicable inner character comes more prominently into view, in particular a defining scene that reunites Joe with Cathie, accidentally running into one another sometime after they split up, where they strip naked and have sex in the dirt and grime under a truck, hardly a romanticized view, as instead it’s just another depiction of loveless sex.  When she announces she’s pregnant, Joe grows alarmed and immediately defensive, angrily suggesting he may not be the father.  And while she acknowledges having another lover, a likeable plumber named Daniel, there is no question in her mind who the father is.  Gathering his things to walk away, she chases after him and slips along the riverbank falling into the darkness of the river with no sign of her afterwards.  Seemingly paralyzed into inaction, Joe gathers all her clothes and throws them into the river as well, wiping his fingerprints from anything he can recall touching.  Taking an avid interest in the trial afterwards, as Daniel is being charged with murder for the death of Cathie, the film takes a turn into social injustice, as a wronged man is condemned to die, yet it’s just another day in the ordinary lives of a working underclass, making their positions clear in the crowded pubs where gossip takes center stage, eager to equate sex with criminal intent, becoming morbidly intriguing to Joe who listens transfixed to what is being said without ever uttering a solitary word, witnessing a developing lynch mob mentality ready to convict this innocent man.  Joe on the other hand conveniently runs away, away from himself and his conscience, like he’s always done.  And while the book may be an existential critique of a disconnected bourgeois society that is no longer in touch with its own moral values, the film is more of a psychological study of Joe’s own moral failings, expressing a near pathological indifference inherent with his own failure to adjust to the constantly changing world around him.  Far from innocent himself, his crimes are those of narcissistic indulgence, apathy, and self-disgust.  Joe’s connection to the corpse is intentionally withheld until the latter stages of the film, allowing viewers some clue into the kind of man he is, a morally irredeemable character, where any Dostoyevskian guilt or anguish are simply beyond his grasp.
Posted by Robert Kennedy at 12:01 AM